Kottangal, Madhavan, Kuruvilla, Parameswaran, and Kollathodi: Spindle cell oncocytoma, a misdiagnosed rare entity of the pituitary – A case report with review of literature and special emphasis on the morphological differentials

Spindle cell oncocytoma, a misdiagnosed rare entity of the pituitary – A case report with review of literature and special emphasis on the morphological differentials

Spindle cell oncocytoma (SCO) of the pituitary is a rare tumor of the adenohypophysis occurring in the sellar/suprasellar region. This tumor has been recognized as a distinct entity by the  WHO Classification of CNS tumor in 2007. Spindle cell oncocytoma of the pituitary gland accounts for 0.1–0.4% of all sellar region tumors and is predominantly seen in the older adult population. This rare entity simulates clinical and radiological features of pituitary adenoma and is often misdiagnosed. Though WHO grade 1, the tumor can recur and have invasive properties. Herein, we report a 61-year-old woman with panhypopituitarism and temporal field cut, clinically and radiologically diagnosed as pituitary macroadenoma, while the histomorphological and immunohistochemistry features helped in arriving at a diagnosis of Spindle Cell Oncocytoma. The clinicopathological, histomorphological, immunohistochemical, and molecular properties of the tumor are further discussed.

Spindle cell oncocytoma (SCO), a benign nonendocrinal neoplasm of the anterior pituitary gland, was previously thought to arise from the adenohypophysis's folliculostellate cells.1, 2 But the recent studies and reports suggest pituicytes as the cell of origin3 of the tumor. It is a WHO grade 1 tumor, first reported and named "Spindle cell oncocytoma" by Roncaroli et al. in 2002.2  However, from 2002 to 2021 March, < 50 cases have been reported in the English literature.3 Due to their location and nonfunctional nature, these tumors are often misdiagnosed as nonfunctional pituitary adenomas. The careful histomorphological and immunohistochemical examination helps to have the correct diagnosis. SCO is a spindle cell neoplasm with dense eosinophilic cytoplasm having immunoreactivity for vimentin, thyroid transcription factor(TTF1), epithelial membrane antigen (EMA), galectin-3, and S100.2 The highly vascular and adherent nature often makes the tumor challenging to resect.1, 2, 3, 4, 5, 6

A 61-year-old female with a past history of diabetes mellitus, hyperthyroidism, and hypertension had two episodes of dizziness and one episode of loss of consciousness and was referred to our institution for further workup. She was diagnosed with hyponatremia and had a temporal field cut. Her MRI brain showed a well-defined enhancing altered signal intensity lesion involving the sellar region with expansion of sella and suprasellar extension measuring approximately 1.6 x 2.4 x 2cm (Figure 1). Radiologically and clinically, the lesion was pituitary macroadenoma, for which an endoscopic trans-nasal trans-sphenoidal decompression was done. 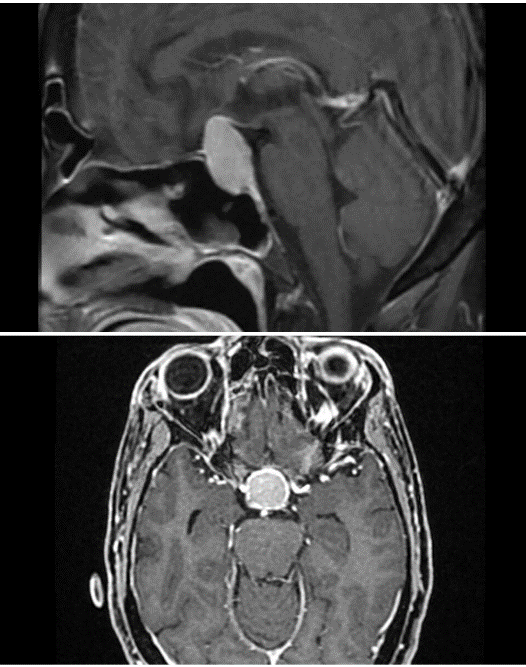 Grossly the tumor was grey-white, friable, and soft. Microscopically a spindle cell neoplasm with cells arranged in fascicle and bundles were seen (Figure 2). Cells had elongated bland nuclei with fine chromatin and a moderate amount of dense eosinophilic cytoplasm (Figure 3). Interspersed prominent vascular channels were also noted. Mitosis was scanty, 0-1/10hpf, and no necrosis was seen. 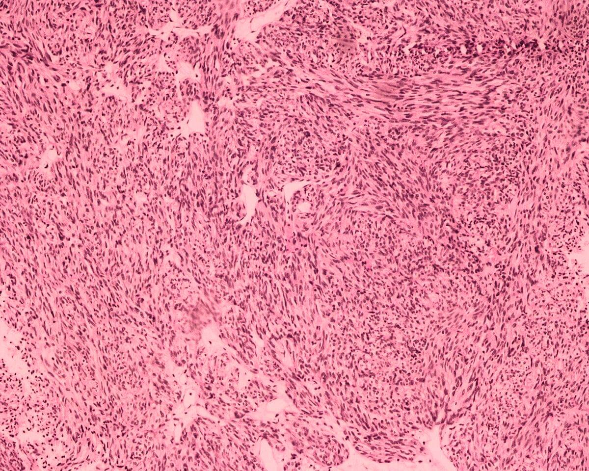 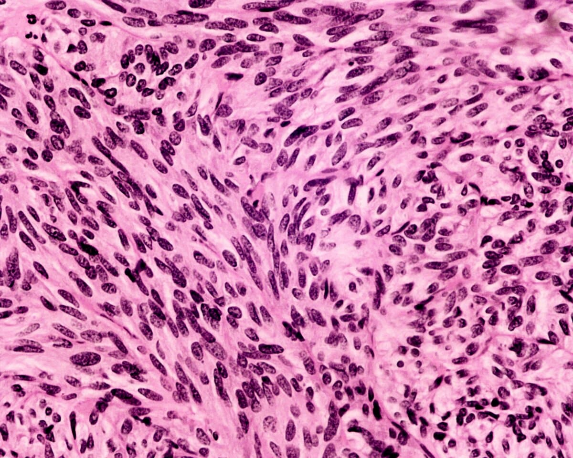 Immunohistochemistry showed strong diffuse nuclear positivity for TTF1 (Figure 4), moderate positivity for EMA (Figure 5), and S100 (Figure 6). The cells were negative for GFAP and synaptophysin. Ki67 proliferation index was 1-2% (Figure 7). With the histomorphological and immunohistochemical findings, the diagnosis of spindle cell oncocytoma, sellar mass was made. The post-operative period was uneventful, and the patient was discharged and is being followed up. 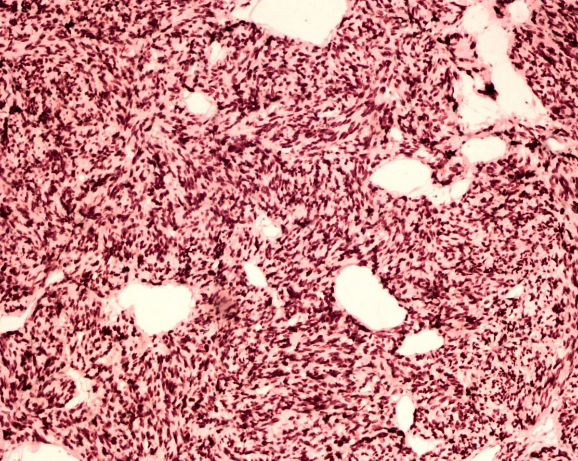 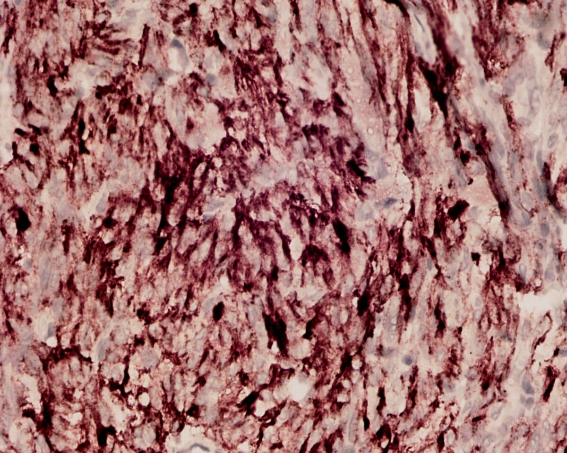 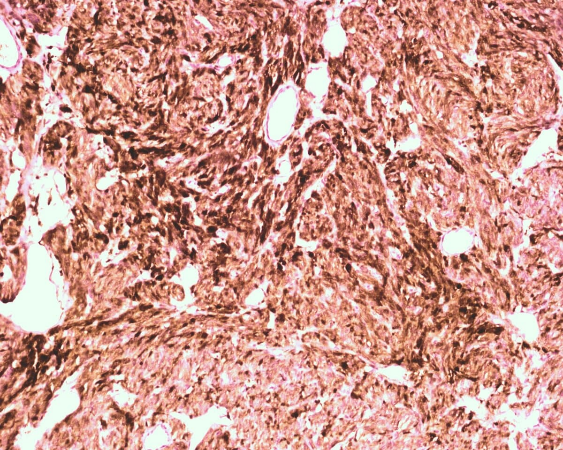 Immunohistochemistry stain for Ki 67 showed a proliferation of 1-2% 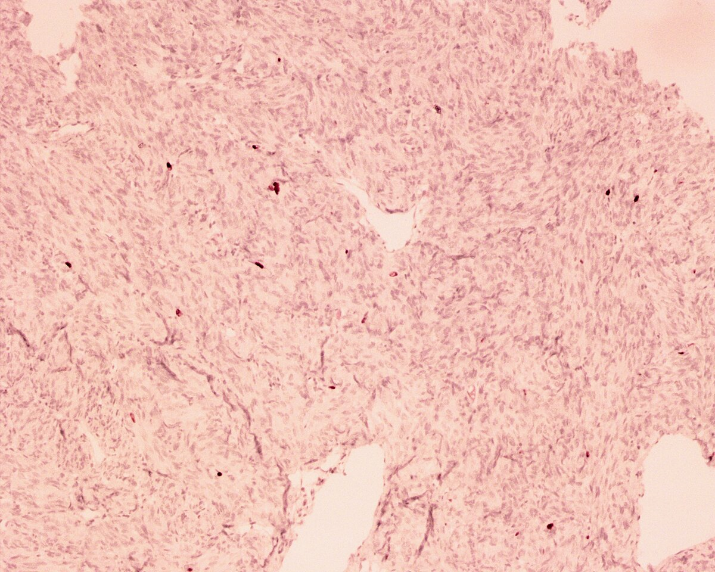 SCO is a very rare nonfunctioning and misdiagnosed tumor of the anterior pituitary, accounting for 0.1% to 0.4% of all the tumors in the sellar region. Previously the tumor was thought to arise from the folliculostellate cells of the adenohypophysis of the anterior pituitary.1, 2 But recent studies and reports suggest that this tumor has similar immunohistochemical characters to the tumors arising from the pituicytes. The nonneoplastic pituicytes, pituicytomas, SCOs, and granular cell tumors stain positive for TTF-1. However, folliculostellate cells are negative for TTF-1, which points out that SCO has a common lineage arising from the pituicytes and is now considered a variant of pituicytoma.4

Clinically and radiologically, the tumor is often misinterpreted as a nonfunctioning pituitary adenoma. This tumor is commonly seen in the older adult group with no sex predilection. The presenting symptoms are usually nonspecific, including visual disturbances, headaches, and panhypopituitarism, mainly due to the mass effect on the optic chiasm and pituitary gland.3, 5, 7

The radiologic features of SCO are also considered to be nonspecific and are indistinguishable from a pituitary adenoma. However, new findings in radiology were described by Hasiloglu et al. in their report of three cases, the early intense contrast enhancement in DCE-T1W1, which denotes the hypervascular nature of the tumor and the T2-weighted imaging showing millimetric hypointense foci and linear signal void areas.7 In addition, in SCO, Kim DJ et al. described the segmental enhancement inversion, the periphery showing a spoke-wheel pattern of early arterial enhancement, and late central stellate enhancement, a feature commonly noted in renal oncocytoma with a critical size.3 They proposed that the central fibrous stellate scar causing enhancement inversions is a specific finding for SCO of the sellar turcica.

Till now, the accurate diagnosis of SCO is purely based on histomorphological and immunohistochemical features. Microscopically, the tumor shows spindle cells with bland elongated nuclei and a moderate eosinophilic/ granular cytoplasm, arranged in interlacing fascicles and whorls with intervening vascular channels. The tumor has scanty mitosis and usually no necrosis. However, case reports with anaplastic features with rapid progression and recurrence are also reported.3

The morphological differentials considered are pituicytoma, meningioma, schwannoma, solitary fibrous tumor(SFT), paraganglioma, and null cell adenoma with oncocytic change. Immunohistochemistry plays a vital role in the diagnosis. The tumor is positive for TTF1, S100, EMA, galactin-3 and negative for GFAP, synaptophysin, chromogranin, CD34. The positivity of TTF1 helps to differentiate from tumors like meningioma and SFT.1, 2, 3, 4, 5, 6

The histomorphological and immunohistochemical features of SCO and its morphological differentials are summarized in Table 1.8, 9, 10, 11, 12, 13

Surgery is the primary mode of treatment. Trans sphenoidal and transcranial approaches had been reported. Due to the tumor's highly vascular and adherent nature, the transcranial method has been preferred by some surgeons.14 Cases with adjuvant radiation treatment with proton beam therapy and Gamma Knife Radiosurgery are also reported.5

Though indolent and slow-growing tumor, the patient needs to be closely followed up with serial MRI as there are many reports of recurrence. Current studies have reported co-occurring MEN1 frameshift mutation (p.L117fs) and somatic HRAS (p.Q61R) activating point mutation. The MAPK activation pathway-associated mutations in SND1 and FAT1 were also noted in SCO. So the MAPK signaling pathway is now considered a targeted therapy for spindle cell oncocytoma, which can be used as a powerful adjunct for aggressive and recurring tumors refractory to surgical resection.15

Spindle cell oncocytomas are often misdiagnosed clinically and radiologically as other tumors of the pituitary. The various pathological studies like light microscopy and immunohistochemistry help the pathologist to arrive at a correct diagnosis. The spindle cell morphology with cells having granular/ eosinophilic cytoplasm and positive stain for TTF1 clench the diagnosis. Though benign, slow-growing tumors, these tumors can recur and have aggressive behavior. So a close follow-up of the patient is mandatory. Since there is a paucity of reported cases with long-term follow-up, large series of case studies need to be performed to know the exact behavior and prognosis of the tumor.

X Yang Q Jiang B Yu Solitary fibrous tumor located in the sella turcica: A report of two cases and review of the literatureOncol Lett20151013548