Retroperitoneal teratoma with malignant somatic transformation: Tumor within a tumor

Extra-gonadal teratomas are rare and occur at various sites, with the retroperitoneum being an unusual site. We report a case of an adenocarcinoma arising in a mature retroperitoneal teratoma with bilateral lung metastasis in a young female. Around less than 20 such cases have been reported in literature with the present case being probably second in the Indian scenario and the first to have adenocarcinomatous component metastasize to lungs. We hereby emphasize on the importance of looking for such suspicious areas in a teratoma in order to tailor subsequent management.

Teratomas are one of the commonest type of non-seminomatous germ cell tumors that are derived from more than one type of the three germ cell layers viz. ectoderm, endoderm and mesoderm.1, 2 They are most commonly gonadal but can also rarely occur at extra-gonadal sites like mediastinum, in midline and sacrococcygeal regions as well as retroperitoneum.1

Teratomas can be benign or malignant. The latter can be a result of malignant transformation of a somatic component that forms about 1% of all teratomas.3 The commonest malignant somatic component is squamous cell carcinoma followed by adenocarcinoma, which have a metastatic potential.4

A 25-year unmarried young girl presented with right abdominal pain of two weeks duration. She was investigated outside. CT scan revealed a retroperitoneal / adrenal mass, the biopsy of which was reported as benign mature teratoma. She was referred for further evaluation and management. The patient denied any obvious systemic disease or other associated symptoms.

On clinical examination, there was right abdominal fullness. No other abnormality was detected on systemic examination. Routine laboratory tests were all within normal limits.

Her 24hrs urine VMA, ACTH, S-cortisol and S-catecholamines were normal.

Tumor markers including Sr. AFP, β-hCG and CA 19.9 were unremarkable.

With a preoperative diagnosis of adrenal mature teratoma, she was prepared with α and β blockers pre-operatively and complete total excision of retroperitoneal mass with right adrenalectomy was done. 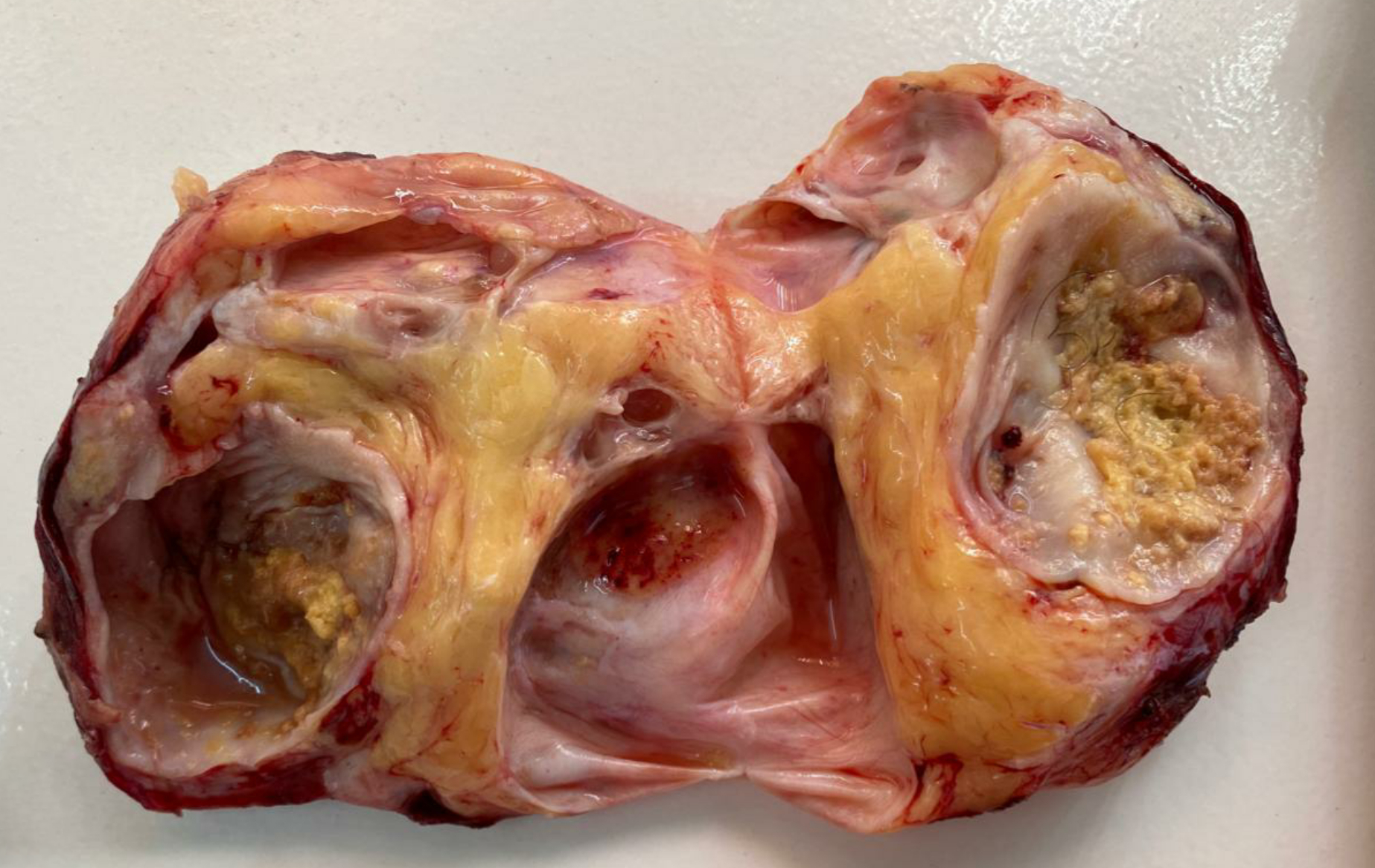 Microscopy demonstrated predominately areas of intestinal type adenocarcinoma arranged in glandular and cribriform pattern filled with necrotic debris and infiltrating the fat and stroma along with cystic teratoma consisting of mainly mesodermal elements like bone, cartilage and hair. The thick cyst wall showed dense inflammation, cholesterol clefts and was devoid of lining epithelium. Adjacent compressed unremarkable adrenal gland was also seen. No other malignant germ cell element was identified. A final diagnosis of moderately differentiated adenocarcinoma (80%) arising in a retroperitoneal mature teratoma was given (Mature teratoma with additional malignant somatic component). The inked surgical margins were free of tumor. (Figure 2) 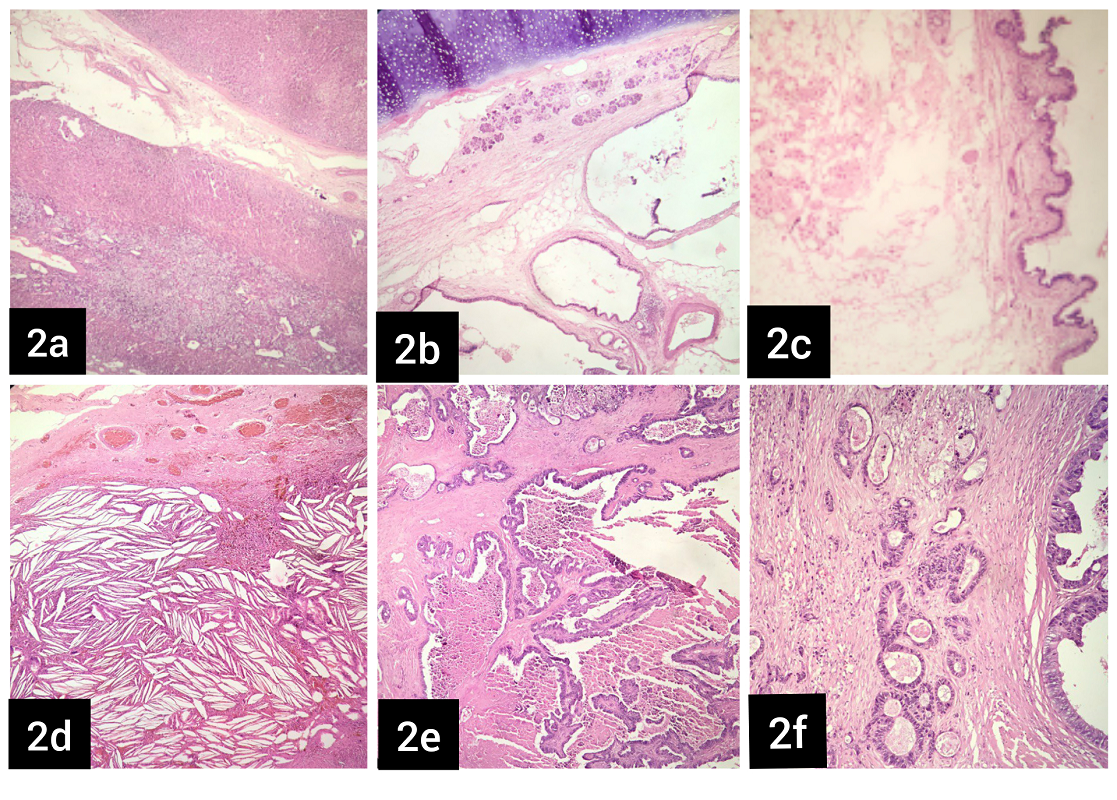 The post-operative course of the patient was uneventful.

Although, local radiotherapy and combination chemotherapy was given, distant metastasis to bilateral lungs was found in 6 months post-surgery.

Immunohistochemistry (IHC) was performed on the paraffin embedded section of the lung biopsy for the following monoclonal antibodies: Cytokeratin, CK7, CK20, SALL4, Oct4, TTF-1, CK19, CA19.9 and Glypican3 to rule out a bleak possibility of second primary and to confirm the metastasis. 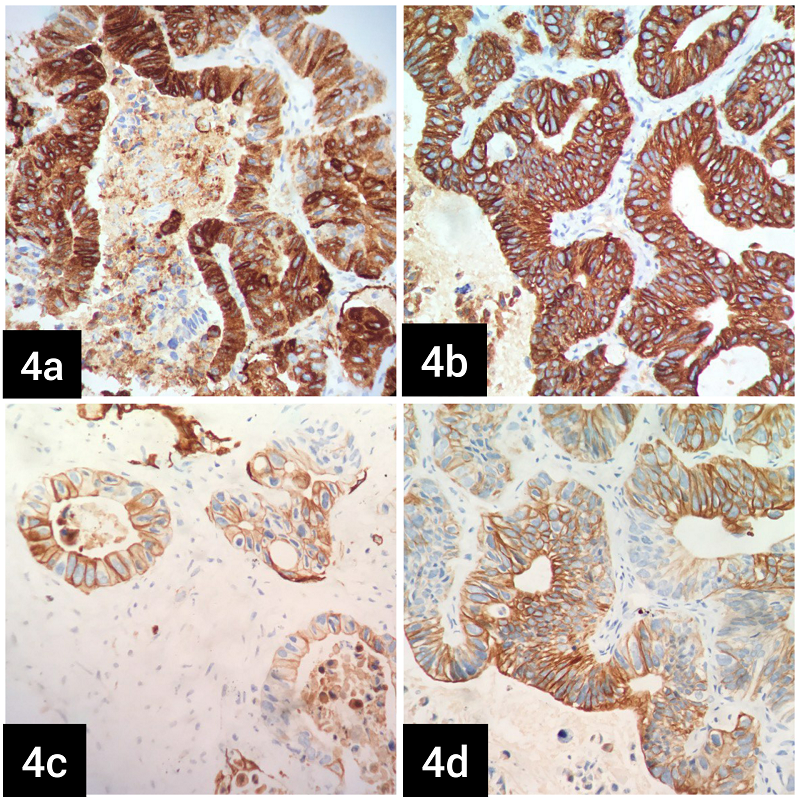 The tumor cells show immunonegativity for a: TTF1 and b: SALL4 (x400) 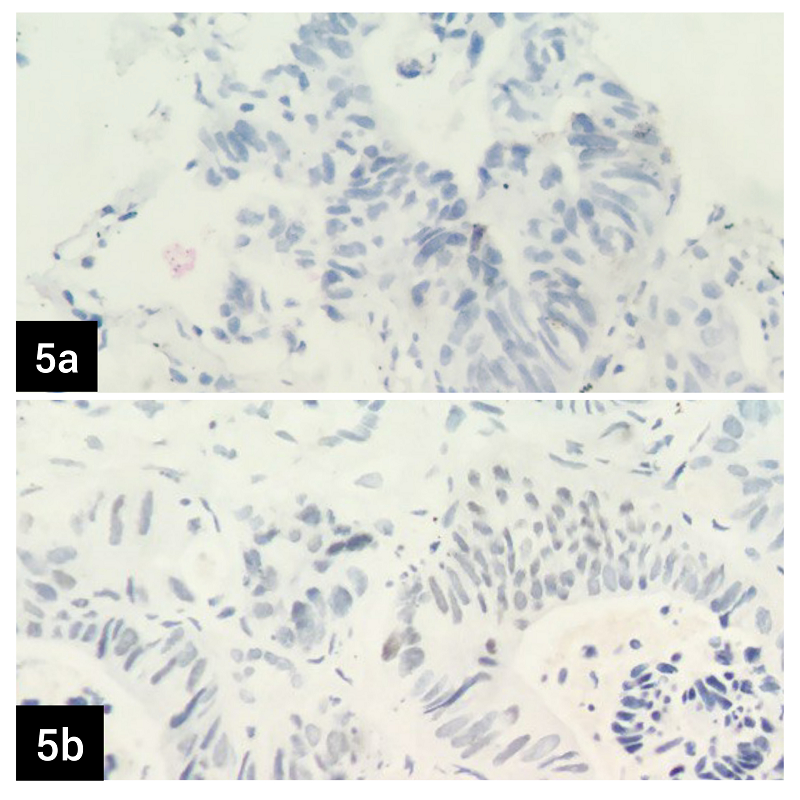 Retroperitoneal teratomas form approximately 4% of all the teratomas and around 1-11% of the primary retroperitoneal tumors.1, 5 Infants and young adults are commonly affected with more predilection for females as compared to males.1, 3, 6 Being deeply located, they are usually asymptomatic and present later on after becoming large enough to cause pressure effects.1, 3 The presenting features depend on the location and the differential diagnosis include a variety of neoplastic and non-neoplastic lesions like adrenal tumors, renal cysts, ovarian tumors, retroperitoneal fibromas, sarcomas, lymphangiomas, hematomas etc.1, 3

Benign teratomas are mature solid-cystic. Malignant teratomas can be a) immature teratomas; b) teratomas which are associated with malignant germ cell tumor components such as yolk sac tumor, embryonal carcinoma, choriocarcinoma; and c) teratoma with malignant transformation (TMT).2, 3, 7, 8

TMT is now reclassified by WHO as germ cell tumor with somatic-type malignancy.4, 8 It was divided into two types by Morinaga and colleagues viz de novo- wherein part of the cells of teratoma become malignant during its natural course and secondary wherein radiotherapy or chemotherapy leads to the malignant transformation. The former is presumed to develop due to decrease in the teratoma itself as a result of aging and hence seen usually in elderly age group with a longer duration whereas the latter is seen in relatively younger age group since after therapy, the totipotent fetal cells give rise to malignant component.1, 8, 9

TMTs are commonly seen in the age group of 30-70years; the size of >9.9cm, duration of disease being the risk factors.3 The case in discussion is a 25-year-old female with a tumor of size 11.5cms. These tumors can be suspected on radiology with the findings of voluminous tumor with adhesion to adjacent structures, contrast enhancing capsule with thickened wall, uneven internal surface, containing fat-less solid areas.9 It is imperative to grossly identify such suspicious areas which may exist only in a part of the specimen and may appear as mural plaque/ mural nodule/ polypoidal mass/ solid areas/ as a necrotic or hemorrhagic area.

Any constituent of the teratoma has potential for malignant change. The malignant component can be carcinomatous like squamous cell carcinoma, adenocarcinoma, etc which is seen in around 37% of the germ cell tumours with somatic type malignancy;9 with the former being most common type. Mucinous, enteric, intestinal, signet ring cell type variants of adenocarcinoma have been documented.1, 3 Basal cell carcinoma, sarcoma, malignant melanoma, neuroectodermal tumor, carcinoid tumor, thyroid tumors, sebaceous carcinoma etc are the other tumors that can arise in a teratoma.4 The present case showed an adenocarcinomatous transformation.

Most of the somatic type malignancies are immunonegative for the normally expressed immunostains in a GCT like PLAP, AFP, β-hCG, CD30; but they take up the immunostain like the respective counterpart found in other organs in the body. For example Adenocarcinomatous transformation (intestinal origin) can be confirmed by immunostains like CK7, CK20, CDX2.

TMTs in general have a grim prognosis which also depends on the histological type of the transformation. Those with adenocarcinomatous component have a poor prognosis as in the above case. TMTs have metastatic potential.3, 9 Lymph node, scalp, breast and brain metastasis have been reported.6, 9, 10 The present case showed bilateral lung metastases.

Though mature teratoma is a benign neoplasm, the mainstay of treatment is aggressive surgical intervention due to possibility of malignant transformation of any of the constituent tissue.8

The primary treatment for TMT is complete surgical resection.10 Cyst wall invasion, adhesions, tumor dissemination and presence of ascites has a grim prognosis.3

TMTs with adenocarcinomatous transformations are generally supposed to be chemo and radio-resistant and tend to recur without complete resection.1, 3, 6, 10

There is no standardized chemotherapy regimen due to the rarity of the tumor. But according to few studies the outcome of the patient is said to be improved based on the adapted targeted chemotherapy pertaining to the somatic malignant component.9

To conclude, TMT in a primary retroperitoneal tumor is extremely rare and such a possibility should always be excluded specially in a middle aged patient with a large sized long standing tumor. It is imperative to do postoperative pathological examination i.e meticulous sampling and microscopy for accurate diagnosis of TMT as it is not always possible to predict the malignant component in teratoma, clinico-radiologically. They have a poor prognosis and hence it is important to tailor subsequent management of the patient. At present, complete surgical resection with transformed histology adapted chemotherapy can be an adjuvant therapy. Adjuvant chemotherapy should be provided especially when the bulk of the tumor is comprised of carcinomatous component, since the risk of metastasis cannot be ignored. Targeted therapy can come out as a successful alternative in future.

The authors certify that they have obtained all appropriate patient consent forms. In the form the patient has given his/her/their consent for his/her/their images and other clinical information to be reported in the journal. The patients understand that their names and initials will not be published and due efforts will be made to conceal their identity, but anonymity cannot be guaranteed.

There are no conflicts of interest.

G Arhant D Mirdad A Berghian N Piton JC Sabourin Metastatic Adenocarcinoma to the Breast arising from a Mediastinal Mature Teratoma with Somatic Malignancy: A Case Report with a Review of the Literature 10.21203/rs.3.rs-135224/v1