Serous borderline tumour of the peritoneum- A rare entity

Serous borderline tumor is a rare entity of peritoneum which can lead to diagnostic dilemma due to its resemblance with reactive lesions of peritoneum and ovarian borderline and malignant neoplasms. Complete clinical details, histopathological evaluation and immunohistochemistry aid in arriving at correct diagnosis. Recognizing this entity is important as it carries good prognosis.

Serous borderline tumor (SBT) of the peritoneum is a rare low grade proliferative serous epithelial tumor, fundamentally arising in the peritoneum,1 without underlying tissue invasion.2 In SBT of the peritoneum, bilateral ovaries and fallopian tubes are macroscopically and microscopically normal. Ovary may show minimal ovarian cortical involvement less than 5 × 5 mm2.2 Prior to the establishment of the term “SBT peritoneum”, various other nomenclatures were utilized to describe this entity, such as primary papillary peritoneal neoplasia, atypical endosalpingiosis and peritoneal serous micropapillomatosis of low malignant potential.3 Serous borderline tumor is an incidental finding most of the time during laparoscopic procedures done for other clinical indications.

A 20-year old unmarried female patient presented to the Obstetric and Gynaecology department with irregular menstrual cycles since 1 year. She had no history of pain abdomen, dysmenorrhea, urinary or bowel symptoms. There was no history of loss of weight or loss of appetite and no previous history of tuberculosis. Past history revealed inguinal hernioplasty at 9 years of age. There was no history of any malignancy in the family members. Ultrasonography abdomen and pelvis showed normal sized uterus, retroverted, endometrial thickness of 5.8mm. Multiple intercommunicating oblong cystic lesions with internal septations were separately seen from right ovary collectively measuring 5.2 x 4.2cm with a possibility of paraovarian cyst. No free fluid or lymph node enlargement was noted. Bilateral adnexae were normal. CA 125 was within normal limits. After pre-anesthesia checkup, covid testing and informed written consent, patient was taken up for surgery under general anesthesia for diagnostic and therapeutic cystectomy. A retroperitoneal multiloculated cyst (7x6 cms) was noted. Laparoscopic cystectomy and marsupialization of the cyst was performed. Clear serous fluid was drained. Inner surface of cyst was smooth with no papillary excrescences. Separate small papillary excrescences with calcific material approximately 5mm across were seen throughout the pelvis especially on the right ovary, pouch of Douglas, and uterosacral ligaments. Left ovary was unremarkable. There were no adhesions in pelvis. A differential diagnosis of miliary tuberculosis and metastatic secondaries was clinically suspected. Biopsy of the retroperitoneal cyst wall and the calcified material on uterosacral ligament was taken and sent for histopathological evaluation. Hematoxylin & eosin stained sections studied from calcified deposits on uterosacral ligament showed a nodular lesion composed of mesothelial cell proliferation in the form of tubules and papillae. Individual cells were columnar to cuboidal with eosinophilic cytoplasm, hob nailing and round to oval nuclei, few of them showing mild atypia. Numerous psammoma bodies were noted in the core of these papillae and the lining cells detached from the surrounding stroma forming clefts(Figure 1). No destructive invasion was seen into the underlying fibrocollagenous stroma. No necrosis or foreign body granuloma were noted. Differential diagnosis of reactive mesothelial hyperplasia versus possibility of serous borderline tumor was considered and immunohistochemistry was advised. The informed patient consent was taken to do the complete work up and use it for patient management as well as publication. Hence immunohistochemistry was performed. The panel of markers including BerEp4, PAX8, p53 and calretinin was advised. BerEp4 and p53 were positive while PAX8 and calretinin were negative (Figure 2). The final diagnosis of serous borderline tumor of peritoneum was given. Serial sections studied from retroperitoneal cyst wall showed chiefly fibrocollagenous tissue with chronic lymphocytic inflammatory infiltrate and hemorrhage. No epithelial lining was seen. A diagnosis of pseudocyst of retroperitoneum was given. 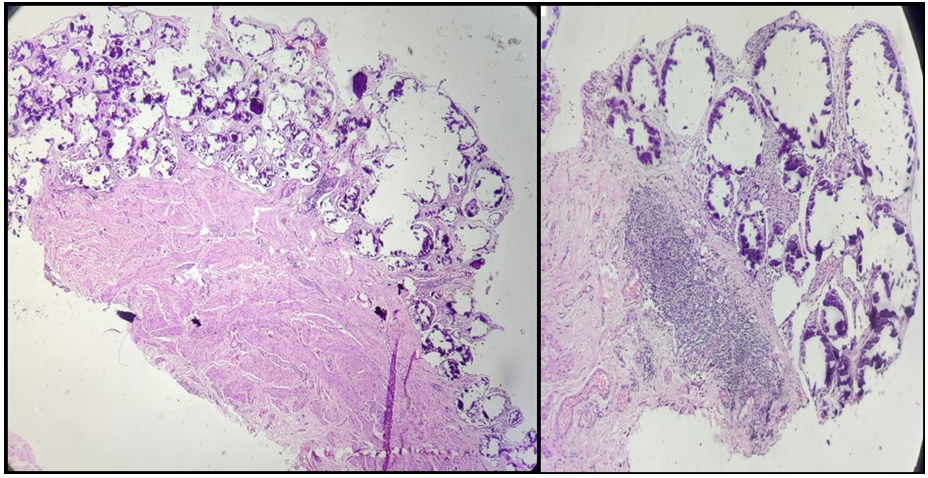 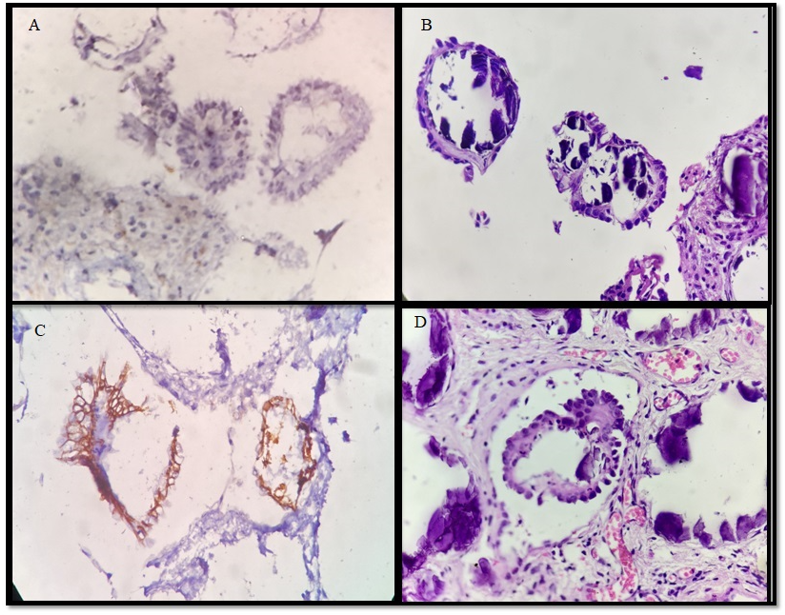 The peritoneum is a serous membrane comprising of two layers, the visceral and parietal peritoneum within which majority of the abdominal organs are invested.4 It consists of a single layer of mesothelial cells resting on vascularized subserosal tissue and separated from it by a continuous basal lamina.5 It expresses parathyroid hormone-like peptide activity.5 Ultrastructurally, the mesothelium shows desmosomes, apical tight junctions, surface microvilli and tonofilaments. Immunohistochemistry of the mesothelium shows positivity with epithelial membrane antigen (EMA), calretinin, mesothelin, cytokeratin (including keratin 5/6), podoplanin (D2-40), thrombomodulin and basal lamina components. It is negative for carcinoembryonic antigen (CEA), Ber-EP4, Leu-M1 and B72.3.5

WHO classifies tumors of peritoneum into mesothelial, epithelial tumors of mullerian type, mesenchymal, tumor like lesions and secondaries.1 Serous borderline tumor of the peritoneum is a rare epithelial neoplasm that is incidentally detected at laparotomy and causes suspicion for a primary ovarian tumor with peritoneal implants.6 The age range of SBT peritoneum is 16-67 years. The pathogenesis of peritoneal SBT is similar to that of ovarian SBT. However, peritoneal endosalpingiosis and papillary tubal hyperplasia of the fallopian tube are the likely precursors.5 In 85% of cases, an association with endosalpingiosis is identified.4 In our case no such identification was noted. It is believed to arise from secondary mullerian system remnants either embedded within or adjacent to the peritoneum.6 It is essential to exclude prior ovarian lesions before arriving at this diagnosis.1 In our case too, ovaries did not show significant lesions except for a 5mm calcific deposit on surface of right ovary.

The clinical presentation of peritoneal SBT comprises mainly of infertility and abdominal pain. 7 Grossly, SBT peritoneum has a variable appearance, with focal to diffuse lesions that may be granular, miliary, nodular or may resemble adhesions. An association with a dominant peritoneal nodule or cyst has been described in 4 cases. The microscopic features have been traditionally divided into 2 categories: lesions with or without an eminent fibroblastic response surrounding the epithelial cell proliferation.6 The cells lack prominent cytological atypia and mitoses. There is absence of destructive stromal invasion. In the absence of a fibroblastic response, neoplasm consists of broad papillae with mild to moderate atypia, which is either loosely attached to or detached from the peritoneum. The cells of the papillae may be flat, cuboidal, or columnar with foci of stratification. The lining cells can detach from the surrounding stroma, to form ‘clefts’. Psammoma bodies are numerous and conspicuous.6

The diagnosis of peritoneal SBT can be challenging because of the similarities with numerous other types of peritoneal pathologies.7 Mesothelial hyperplasia which was the closest differential diagnosis in our case is a frequent response to injury to the serosa. It is usually associated with excessive shedding of cells and fibrosis, which causes difficulty in the interpretation of both cytology and biopsy specimens of pleura and peritoneum.8 Mesothelial hyperplasia occurs in a diffuse pattern throughout the peritoneal cavity in liver cirrhosis, collagen vascular diseases (e.g. lupus erythematosus), viral infections and long-standing effusion regardless of cause. It can also occur in a localized fashion as a response to mechanical insult.5 The pathologic differential diagnosis includes endometriosis, endosalpingiosis, benign reactive mesothelial proliferations such as adenomatoid tumor or florid mesothelial hyperplasia and well-differentiated papillary mesothelioma.6 The most important neoplasms in the differential diagnosis include primary ovarian papillary serous borderline tumor with implants, high-grade primary peritoneal papillary serous carcinoma and well-differentiated papillary mesothelioma.6 Absence of ovarian lesion or any peritoneal organ mass lesions, frank nodularity, severe epithelial atypia, destructive invasion into underlying fibrous tissue, necrosis and presence of numerous psammoma bodies favoured a serous borderline tumor in our case.

SBT of peritoneum are positive for Pan CK, BerEp4, B72.3 and MOC-31 and negative for mesothelial markers like calretinin and D2-40.6 Peritoneal SBTs also demonstrate an increase in Ki-67 and HER-2/neu expression and reduced expression of estrogen and progesterone receptor when compared to primary ovarian neoplasms Positivity for BerEp4 and p53 favored epithelial origin and PAX8 and calretinin negativity ruled out primary ovarian origin and mesothelial reactive and malignant lesions respectively in our case. SBTs also show POLE E (DNA polymerase epsilon catalytic subunit E) mutation and ultra mutated profile.2 KRAS/BRAF mutations are also seen in a large proportion of peritoneal SBTs.5 As peritoneal SBTs have lower response rates to conventional treatment, targeted therapy with BRAF inhibitors could serve as an alternative effective treatment.2 Since SBTs of peritoneum have a relatively good prognosis, debulking of lesions with conservation of the uterus and ovaries in young females is recommended.3 A few cases of successful pregnancies after conservative therapy have been noted. In the elderly, the risk of transformation to low-grade serous carcinoma rationalizes scrupulous removal of these lesions. Post-operative radiation or chemotherapy is not recommended, however, careful follow-up is adviced.3 On follow-up, 85% of these patients show no clinical evidence of progressive disease and the majority of the rest remain well, after the resection of recurrent tumor.9 The rate of survival is 95%, which is similar to that of ovarian serous borderline tumor with peritoneal implants.3Peritoneal SBTs have a better prognosis when compared to low grade serous carcinomas. However, long term follow up is recommended as it carries a risk of recurrence and progression to low grade serous carcinoma.1

Peritoneal SBT is an uncommon entity. However, it is of diagnostic importance because of its similarity to other peritoneal and mullerian proliferations of both benign and malignant biologic potential. In the differential diagnosis of peritoneal surface epithelial proliferation with conspicuous psammoma bodies on the peritoneal surface, peritoneal SBTs should be considered. Correlation with clinical features, radiologic findings and immunohistochemistry is important in arriving at the correct diagnosis.