In females breast carcinoma is the most common cancer worldwide. Globally, 2.3 million women were diagnosed and 685 000 deaths due to breast cancer were reported in year 2020. Even in the era of immunohistochemistry (IHC) and molecular studies, the aggressive nature of the breast cancer can be determined by its histological type, grade, nodal status, and metastasis. Mucinous carcinoma (MC) is a rare variant of invasive breast cancer accounting for 1-7%. It is represented by the presence of large extracellular mucin pools. Based on the mucin content two main subtypes are identified: Pure Mucinous Carcinoma (PMC) and Mixed Mucinous Carcinoma (MMC). Pure Mucinous Carcinoma (PMC) is localized in most of the cases, whereas the mixed forms tend to metastasize to lymph nodes. Hence the mixed forms often require an axillary dissection during surgery. We are presenting a case of 70 year old female who presented with the complaints of lump in the right breast since 2 months and on ultrasound work up a score of BIRADS V was given. She underwent right modified mastectomy with right axillary dissection and was diagnosed as mixed type of mucinous adenocarcinoma breast by histopathological examination. It was confirmed by IHC which showed positivity for ER, PR & Synaptophysin and negativity for Her2neu. Prognostically MC is better compared to other variants of invasive ductal carcinoma as they respond to hormone therapy.

We present a case of 70 year old female who came with the complaints of lump in the right breast since 2 months with no family history of breast cancer. On clinical examination, an irregular swelling of 2x1 cm was noted in upper outer quadrant and right axilla had a palpable swelling of 1x1cm. Ultrasound showed a well defined heterogenous lesion with few specks of calcification measuring 2.1x1.4cm at 10-12`o clock position involving the retroareolar region was seen and a BIRADS V score was given. Fine Needle Aspiration Cytology (FNAC) examination of breast was done and it was positive for malignant cells.

ER, PR, Synaptophysin were positive and 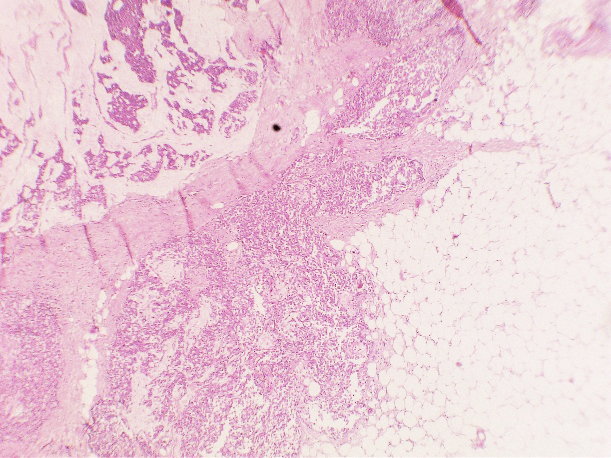 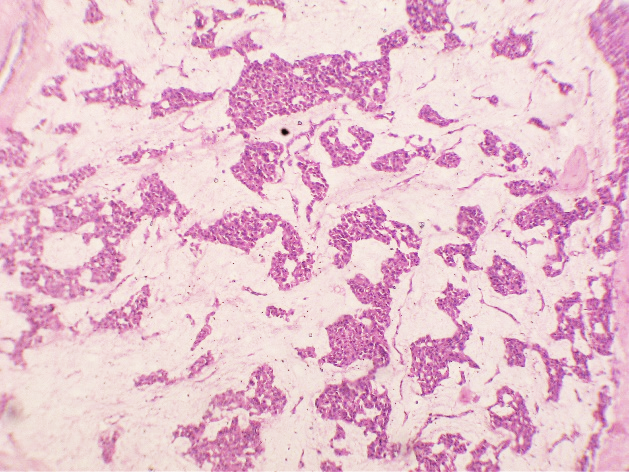 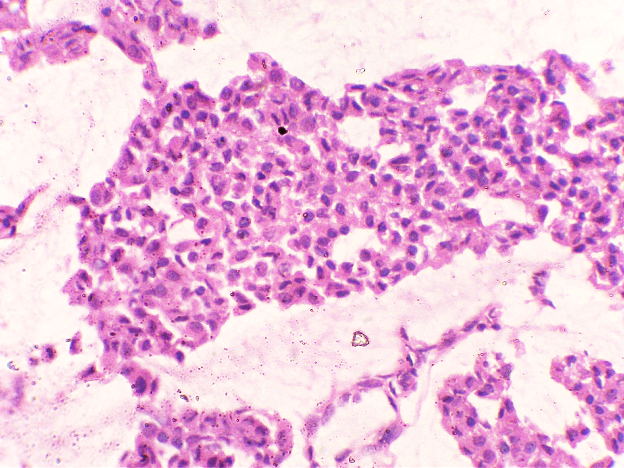 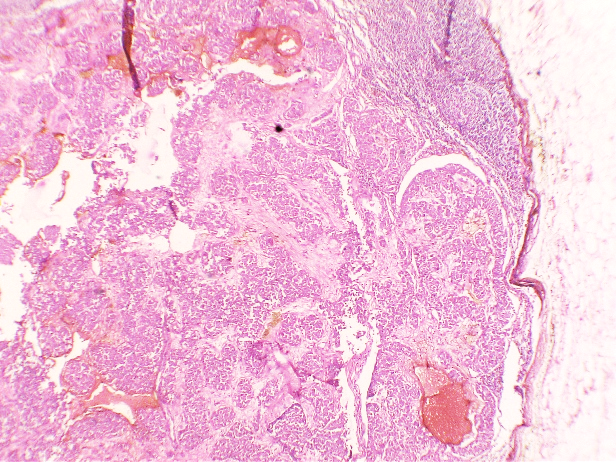 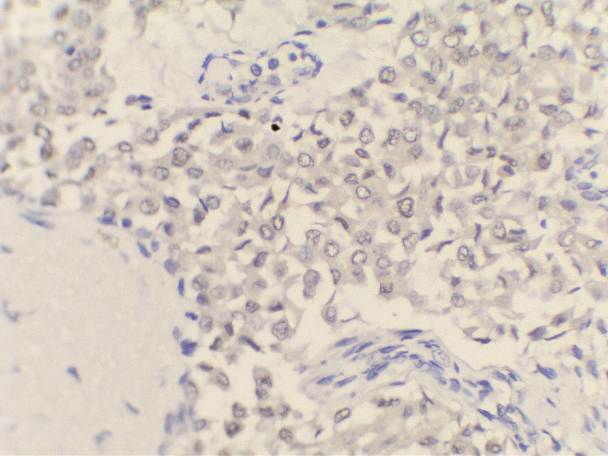 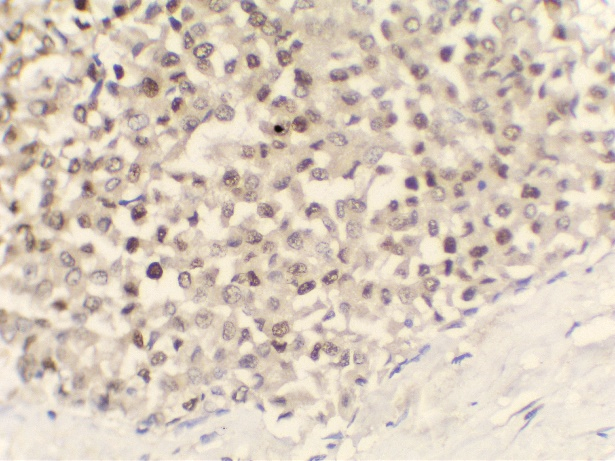 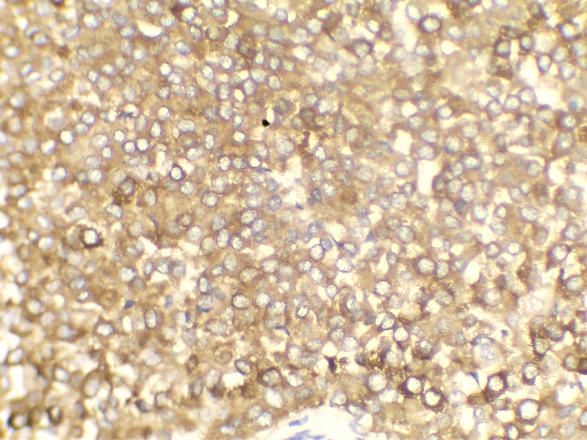 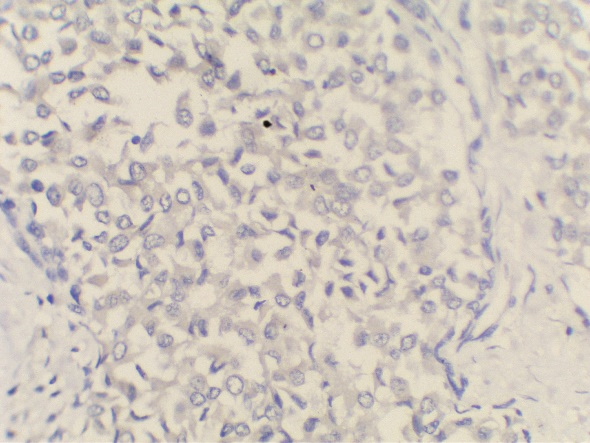 In our Institution, during last 3 years 50 cases of breast carcinoma were reported out of which only 3 cases i.e., 6% were mucinous adenocarcinoma of breast. FNAC was done in this case which was positive for malignancy.

MC is a relatively rare histological subtype that is characterized by neoplastic cells that are arranged in sheets or clusters and are suspended in extracellular mucin. In PMC, mucinous component is >90% consisting of solely of tumor tissue with extracellular mucin production.1 MMC has 10-90% of mucin along with invasive ductal epithelial component. Based on the cellularity and endocrine differentiation, two types of MC has been suggested. Capella type A shows scattered small epithelial clusters, strips or cribriform structures floating in pools of extracellular mucin. Capella type B shows large sheets of tumor cells with mucin production and neuroendocrine features which was confirmed by Synaptophysin IHC in this case.4, 5 Most of the MC cases are ER, PR Positive and Her2neu negative. MMC have higher rate of nodal involvement.6

In view of nodal involvement, it is important to differentiate between PMC and MMC. PMC usually shows a better prognosis and a lower lymph node metastatic rate compared to MMC.8 Adjuvant endocrine therapy is indicated for hormone responsive tumors as most of mucinous carcinomas are positive for estrogen receptor and/or progesterone-receptor. 9, 7