Pleomorphic lipoma is a rare neoplasm that is considered as a variant of spindle cell lipoma. It predominantly occurs in the dermis or subcutis of the posterior neck, upper back, and shoulders. Pleomorphic lipoma may clinically present as a slow-growing and well-circumscribed subcutaneous mass. Though it is a benign tumour it may contain atypical cells for which it may mimick sarcoma or other malignant soft tissue tumours. So histopathological diagnosis is vital for preventing unnecessary surgery. Here we report a case of a pleomorphic lipoma on upper back in a 55yr old patient.

Pleomorphic lipoma(PL) is considered as a variant of spindle cell lipoma(SCL), belonging to the same spectrum with similar histological features and immunophenotype. It typically involves the subcutis of posterior neck, upper back and shoulders. Occasionally it may involve palm, tonsillar fossa, orbit, tongue, vulva and oral cavity.1 Both the entities shows a male preponderance preferably in older men (85-90%) with a median age group of >55 yrs. Previous studies demonstrated similar genetic aberrations of both the entities such as partial loss of chromosome 13 /16 and mostly deletions of 16q13.2 Recent studies by Chen et al confirmed loss of Rb protein expression among this group of tumours.3 However there is a diagnostic dilemma to be called as spindle cell lipoma/pleomorphic lipoma instead of atypical lipomatous tumour.4 Our article throws light on this rare entity as well as the differential diagnosis that are considered with it.

A 55yr male presented to surgery OPD with a small swelling measuring 2x1 cm on the upper back which was non progressive since 3 years. There was no history of pain, fever or discharge from the swelling. On examination the swelling was soft, with smooth surface. FNAC done from the swelling showed few spindle cells entrapped within clusters of mature adipocytes. A diagnosis of Spinde cell lipoma /fibrolipoma was rendered with an advice for biopsy. Excision of the tumour was done under local anesthesia. Grossly it was a soft swelling measuring 2.5x1cm, cut section was yellowish, homogenous. Biopsy revealed a well circumscibed dermal tumour composed of proliferating mature adipocytes admixed haphazardly with dispersed spindle cells that are slightly enlarged with fusiform, hyperchromatic and irregularily shaped nucle with inconspicous nucleoli. Floret giant cells are present along with inflammatory cells comprising of lymphocytes, plasma cells and mast cells over a ropey collagenous background. No mitoses or necrosis was seen. lipoblasts and plexiform capillary network were absent. These histomorphological features clinched our diagnosis in favour of Pleomorphic lipoma. 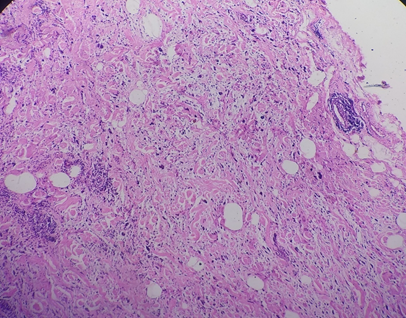 LP 100x- Pleomorphic cells in a background of ropey collagen 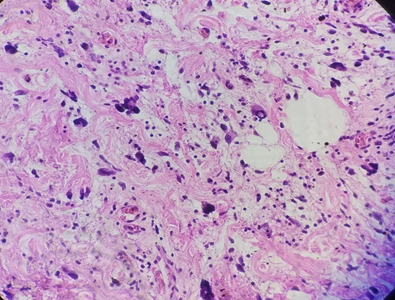 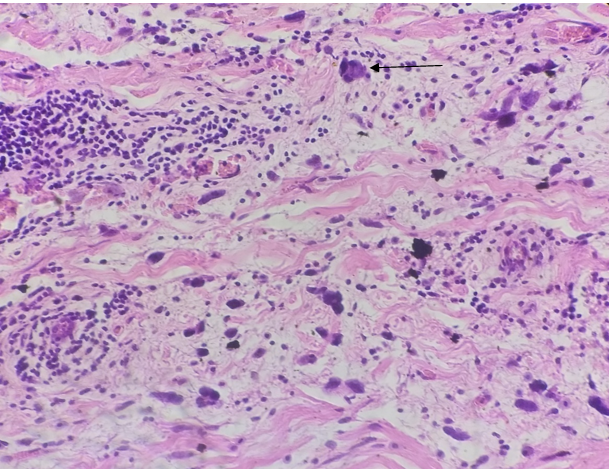 Pleomorphic lipoma is a rare pseudosarcomatous soft tissue neoplasm that typically presents as a slow growing mass in the subcutis of the head or neck. They are relatively small (2 to 5 cms)but occasionally may present with size >10 cms. Pleomorphic lipoma is four times more common in males and usually presents between the ages of 50 and 70 years.

As FNAC of this entity may pose a diagnostic dilemma and may masquerade as malignant soft tissue tumour due to presence of atypical cells the correct diagnosis can be made by histopathology followed by confirmation by IHC. The clues to the diagnosis are a) predominant location in the subcutis or dermis of posterior neck /upper back or shoulders b)variable amount of adult fat, rarely fat free and no lipoblast, c) atypical cells ranging from rare to frequent d) bundles of ropy/keloidal collagen e) CD34 positive on IHC.8

The histological differential diagnosis of classic pleomorphic lipoma includes wide array of both benign and malignant soft tissue neoplasms, such as spindle cell lipoma, atypical lipomatous tumor, myxoid liposarcoma, giant cell fibroblastoma and giant cell angiofibroma. Spindle cell lipoma and Pleomorphic lipoma are part of same spectrum with overlapping features as discussed earlier in this article. However its challenging to differentiate pleomorphic lipoma from atypical lipomatous tumour/well differentiated liposarcoma as floret-like giant cells can also be seen in atypical lipomtous tumour. So absence of floret like cells is not a distinguishing feature amongst these two lesions. Diagnostic clue to differentiate thus is in the location of the tumor. Pleomorphic lipoma usually arises in the subcutaneous tissue of the posterior neck, upper back, and shoulders, whereas atypical lipomatous tumor usually arises in deep soft tissue of the extremities. The typical microscopic appearance of myxoid liposarcoma includes sheet-like areas of proliferating lipoblasts in varying stages of differentiation, a rich plexiform capillary pattern mostly at the edge of the tumor lobules, and a myxoid matrix between the vessels and tumor cells. Giant cell fibroblastoma, a juvenile form of DFSP shows a similar morphology with spindle to stellate cells in collagenous to myxoid matrix with scattered hypechromatic, multinucleated, floret like giant cells and CD34 positivity on IHC.

Pleomorphic lipomas are benign pseudosarcomatous soft tissue neoplasms that can mimick various soft tissue malignancies. The treatment is surgical excision with clear margins as simple enucleation may lead to recurrence. Hence, awareness of this entity with clinical correlation is important for accurate diagnosis and prevent any unnecessary surgery.