Khan, Gupta, Dubey, and Agarwal: Liquid based cytology and immunohistochemistry on cytosmears based diagnosis of letterer-siwe disease in a 40 year male

Background: Histiocytes with coffee bean like nucleus are the diagnostic hallmark of Langerhans cell histiocytosis (LCH) supported with immunohistochemical (IHC) demonstration of fascin, CD1a and S-100. We report a case of Letterer-Siwe disease in a 40year male diagnosed on cytology and IHC on cytosmears along with cytomorphology in Liquid based cytology (LBC) smears.

Materials and Methods: Forty year male presented with complains of low grade fever and reduced appetite from two years with a cervical swelling and discomfort from five months.

Fine needle aspiration cytology (FNAC) has proved its worth in past decades since its inception by Martin and Ellis in 1934 for diagnostic purposes. Being minimally invasive technique it has become one of the first line investigation for swelling of breast, thyroid and lymph nodes.

Letterer–Siwe disease is one of the four recognised clinical syndromes of Langerhans cell histiocytosis (LCH). The disease is named after a german pathologist, Erich Letterer and Swedish physician, Sture A. Siwe who described it as a group of acquired malignant neoplastic diseases of unknown origin, characterized by histiocytic elements. The syndrome, fatal when untreated, occurs in infancy. Anaemia, haemorrhage, splenomegaly, lymphadenopathy, and localised tumefactions over bones are usually present. It is the most severe form of LCH, seen mainly in children, especially less than three years. Estimated prevalence is 1:500,000.1 Morphologically it is characterised by presence of histiocytes with cerebriform or coffee bean like nucleus which is reminiscent of delicate nuclear membrane along with moderate amount of fine cytoplasm. Immunohistochemical demonstration of fascin, langerin, S-100 and CD1a aid in diagnosis.2 We herewith present cytological images of Letterer-Siwe disease in a 40-year male with lymph node mass both conventional and LBC with cytochemistry.

Forty year male complained of low grade fever and reduced appetite from two years with a cervical swelling and discomfort from five months (Figure 1 a). As tuberculosis is quite prevalent in our region; the patient was prescribed anti tubercular therapy by community doctor one and a half year back. He completed his course of six months and was partially relieved. But later he developed a lateral neck swelling which was associated with discomfort. Fine needle aspiration done outside gave diagnosis of lymphoproliferative disorder, with suggestion of Hodgkin’s lymphoma (HL). With this background he presented to Hematology outpatient department of our institute.

Clinical image shows the swelling present in the lateral side of neck; b: shows the CT neck displaying the necrotic center, circled. Hematoxylin and eosin stainedsmears were cellular with cells entrapped in hemorrhage and lying separately in c: (X40); sheets of histiocytes are seen in e: (X200) with coffee bean like cells in d: (X400) 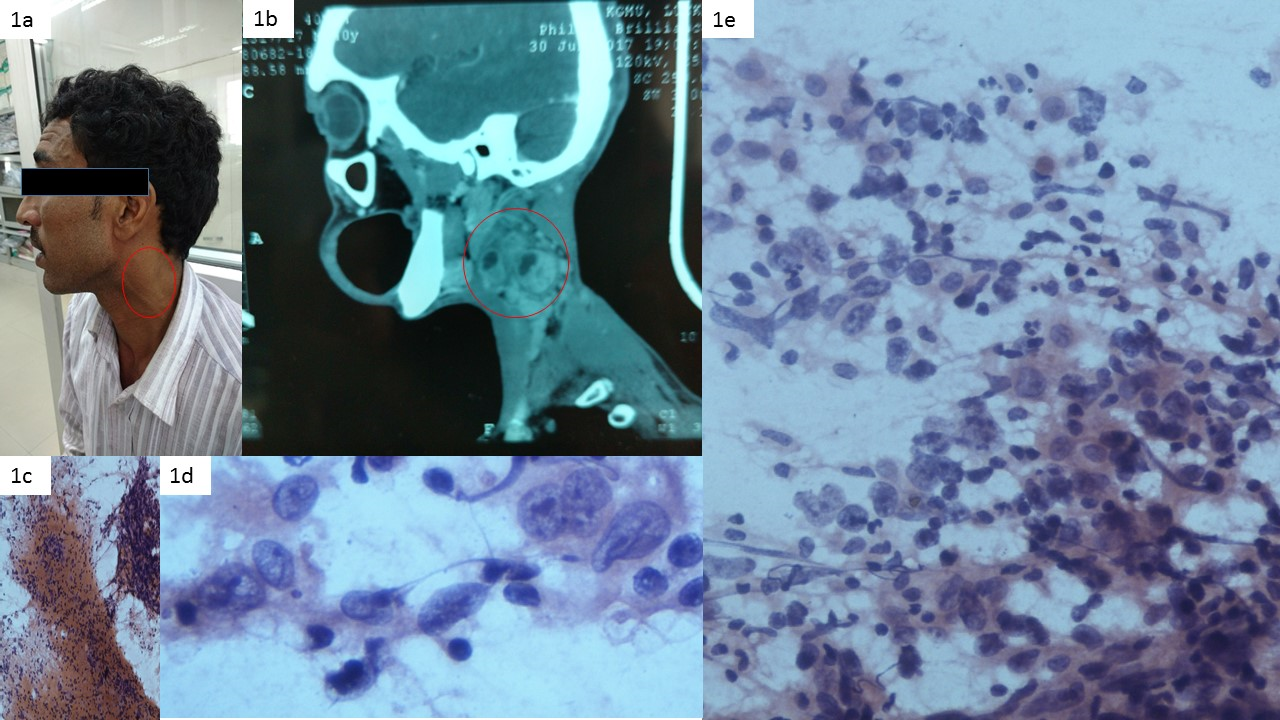 Hematoxylin and eosin stained conventional smears from cervical lymph node were cellular with cells entrapped in hemorrhage and lying separately (Figure 1 c) showed sheets of histiocytes (Figure 1 e) in background of mixed inflammatory cells. Mixed inflammatory cells comprised of polymorphs, plasma cells, and eosinophils. LBC smears highlighted fine chromatin, delicate nuclear outline with coffee bean like morphology (Figure 1 d). The background was clear in LBC smear, the chromatin details of neoplastic histiocytes was excellently preserved (Figure 2 a and b). Though the cytomorphology was quite favorable for LCH but differential of HL was also kept as LCH is uncommon in adult age group. IHC on cytosmears was done for confirmation.

LBC scanner shows clear background and evenly spread cells in a: (X40); in high power a classical coffee bean like tumor cells is seen in b: (X400). Immunohistochemistry displayed tumor cells were positive for S-100 in c: and CD1a in d: with no immunoexpression of CD15 in e: (IHCX200) 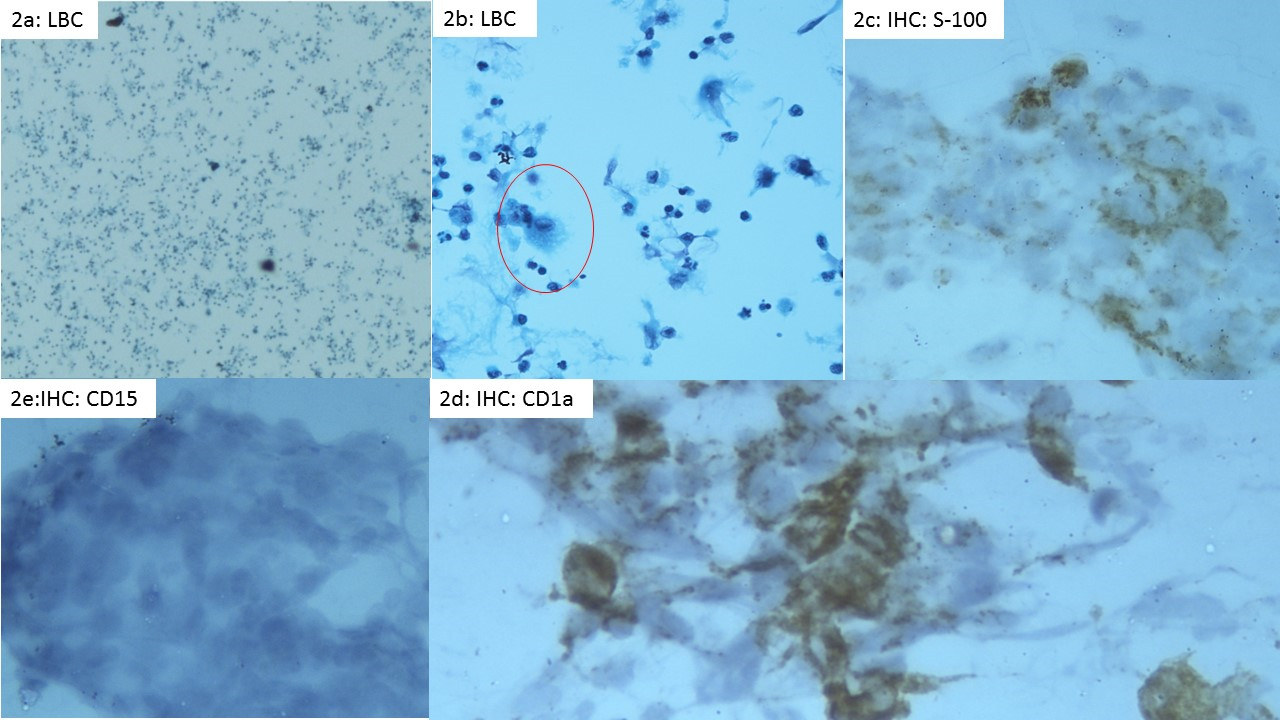 Systemic chemotherapy was given to the patient. He responded well with decrease in size of both lymph node and lung mass. On six months follow-up he has resumed his day to activities.

Langerhans cell histiocytosis (LCH) is common in children but may be seen in adults and LCH with involvement of lung in form of interstitial disease and lymph node has been reported as early as in 1997.2

Involvement of nearly all parts of the human body has been reported by LCH; however few locations are more frequently affected than others. Patients may report single site involvement or widespread involvement of multiple organ systems and sites. Involvement of few sites is usually asymptomatic. Though lymph nodes are involved in 30-40% of cases but for a clinician and cytopathologist it is important as it might be the presenting sign as seen in our case.3

FNA being a powerful diagnostic tool can be instrumental in early and definitive diagnosis supported with ancillary techniques like LBC and IHC. For this the cytopathologist must be aware of characteristic features like a) proliferating histiocytes with intra-nuclear clefts, pale nuclei, fine chromatin, inconspicuous or conspicuous nucleoli (as in present case) and ample pale cytoplasm. b) Slight cellular pleomorphism in histiocytes, presence of giant cells may be seen c) polymorphous background comprising of varying numbers of eosinophils, macrophages, lymphocytes and plasma cells.3

As lymph node involvement is not usually seen in LCH that too, in adults the cytodiagnosis requires clinical and pathological suspicion with careful examination. Kakker S et al., retrospectively reviewed cytosmears from lymph node aspirates of 14 cases of LCH. On review, they found that out of 4 cases which were reported as negative, careful examination revealed proliferating histiocytes in two.4 Morphological differentials of LCH are namely Hodgkin’s disease and anaplastic large cell lymphoma (ALCL). ALCL shows immature lymphocytes intermixed with medium to large sized anaplastic cells.5

Liquid Based Cytology (LBC) is a method of preparing smears from cytological material for assessment which was started in 1996.2 It is an automated method for smear preparation from cell suspensions collected in alcohol based preservative. The technique a) removes hemorrhage and necrosis which might obscure the cells, b) ensures excellent preservation of cells, c) transfers cells in monolayer on a single slide and d) has added advantage that leftover material may be used for cell block or IHC purposes. Cytological alterations like reduced cellular size, loss of background necrosis and spindling of cells due to suspension of cells in fixative liquid must be kept in mind of the reporting cytopathologist while interpretation.

We at our center frequently perform LBC in non-gynecological samples. Advantages offered by LBC is clearly demonstrated in present case as one can appreciate that the background hemorrhage which had entrapped plenty of tumor cells as seen in Figure 1 c is predominantly removed in LBC smears in Figure 2 a. The LBC smear shows excellent cytological details of the neoplastic histiocytes. Cellularity in both the smears were comparable. Immunohistochemical expression of CD1a and S-100 further confirmed the diagnosis with negative expression of CD15 which ruled out HL.4

LCH has not only spectrum of clinical presentation but the response to treatment and clinical course is also varied. Guidelines for management of pediatric age group has been well documented; however for adult cases the management still varies from center to center.5 CHOP (cyclophosphamide, doxorubicin, vincristine, and prednisone) regimens were given to our patient. He responded well and resumed his day to day activities within six months.

In present case highlights that the possibility of LCH must be kept even in an adult presenting with lymph node enlargement; though it is rare. Though histology is considered as Gold standard, but cytology is classical. LCH can hence be diagnosed on FNA smears when complimented with ancillary techniques (IHC and LBC).

S A Pileri T M Grogan N L Harris Tumours of histiocytes and accessory dendritic cells: an immunohistochemical approach to classification from the International Lymphoma Study Group based on 61 casesHistopathology200241129