Jadhav and Smita A: Nodular hyperplasia of parathyroid gland in chronic kidney disease – A case report

Nodular hyperplasia of parathyroid gland is an advanced state commonly seen in a secondary and tertiary hyperparathyroidism. It shares similarities on histology with parathyroid adenoma creating a diagnostic dilemma. Adequate history, biochemical investigations and radiological studies majorly supports the accurate diagnosis. Identifying correct state of hyperparathyroidism is essential in a view of therapeutic management and its outcome.

30 years old Male, diagnosed with CKD was admitted with complaints of oliguria and pain in abdomen 4 years ago. USG revealed renal calculus of 1.5x1.0 cm in pelvi-ureteric junction in right kidney 5 years ago for which he underwent lithotripsy. Since then patient had persistently high levels of creatinine in the range of 12.5mg/dl. He eventually developed chronic renal disease. KUB was done 2years ago. It showed mild hydronephrotic changes in the right kidney. Hence was categorised into early medical disease. Because of high creatinine levels patient was started on haemodialysis. Considering young age, on long standing haemodialysis he was consider for Renal transplant. He was investigated further. Meanwhile patient also developed kyphosis so MRI spine was done. MRI spine was suggestive of renal osteodystrophy with diffuse osteopenia of lumbar and sacral spine (L4-L5, S1-S2).

Parathyroidectomy specimen was received in our histopathology department.

On histology, nodules of varying sizes composed of predominately chief cells arranged in sheets separated by thin fibrovascular septae. Individual cells have round nucleus and pale granular cytoplasm. At places, cells have bizarre hyperchromatic nuclei. Foci of calcification were also noted. There were no evidence mitotic figures noted in studied sections. Our final impression was nodular hyperplasia of parathyroid gland.

Parathyroid gland (PG) is critically important for maintaining bone mineral homeostasis by secreting parathyroid hormones (PTH). It stimulates bone calcium absorption, renal tubular reabsorption of calcium and phosphate excretion, renal production of 1,25 dihydroxy vitamin D [1,25 (OH)2 D] and gastrointestinal absorption of calcium. Inversely, PTH synthesis and secretions are affected by 1,25 dihydroxy vitamin D as it binds to the vitamin D receptors (VDR) in the parathyroid gland and inhibits PTH mRNA synthesis.1 In recent studies another factor has been identified named as Fibroblast growth factor 23 (FGF-23). It is osteocyte and osteoblast derived phosphaturic factor.1, 2 FGF-23 plays crucial role in phosphate homeostasis in both normal and CKD. Studies show that it binds to Klotho-FGF receptors, decreases the PTH synthesis and secretions.2 This marker can be useful marker for monitoring the medical response.

Hyperparathyroidism is a caused by elevated levels of serum PTH levels mainly divided into primary, secondary and tertiary types. Pathophysiology differs in these types, explained briefly in Figure 1. Parathyroid hyperplasia (PH) is seen in all three types of hyperpathyroidism. Identifying these has important role in management and outcomes. 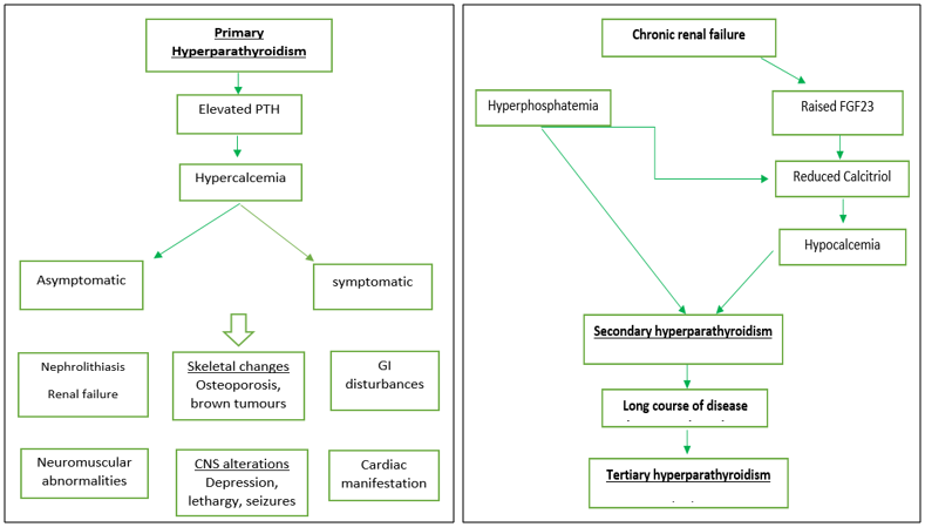 PH constituents around 15% of PHPT whereas 80 - 85% are parathyroid adenomas (PA) and 0.5 -1.0% are of carcinoma.3, 4 PA and PH share histological features, sometimes leads to diagnostic dilemma (Table 2). Hence patient’s clinical history, radiological studies and biochemical profile are helpful in diagnosis.

Pathogenic factors such as FGF-23, hyperphosphatemia and hypocalcaemia (due to decrease intestinal absorptions and calcitriol deficiency) leads to increased secretions of parathyroid hormone and parathyroid gland enlargement.

In initial course of disease, hyperplasia (PH) is diffuse, later progresses to nodule formation. Nodules become larger in size, usually involving whole gland. NH in CKD and long course of dialysis patients are generally progressive and parallel to PTH levels.5 Diffuse hyperplasia is considered to be early and less severe type, may respond to medical therapy.

A Japanese group conducted a study evaluating effects of single dose of calcitriol on PTH levels along with evaluation of hyperplasia of parathyroid gland by ultrasonography. They observed significant decrease in the PTH levels without any detectable glands unlike to those with one or more detectable glands. Hence concluded that response to medical therapy may be depend on the development of parathyroid hyperplasia.

Histology can be use in adjunctive to biochemical and radiological studies to decide the state of hyperparathyroidism. Table 3 explains the differences of biochemical levels helpful in identifying the types. 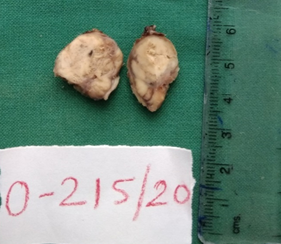 Gross and histological features were favouring more towards NH than PA in our case. Haematoxylin& Eosin (H&E) sections revealed nodules of varying sizes, mainly composed of chief cell hyperplasia divided by fibro-vascular septae. (Figure 3, Figure 4) Less well demarcation was noted between remnant of normal gland to hyperplastic nodules. Less fat admixed normal glandular tissue was seen in between the septae. At places cells were bizarre, pleomorphic and hyperchromatic. (Figure 5) Instead mitosis was rare. 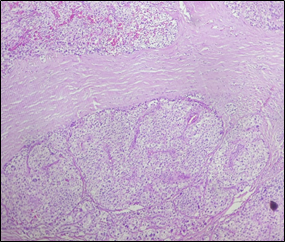 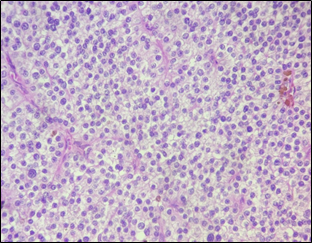 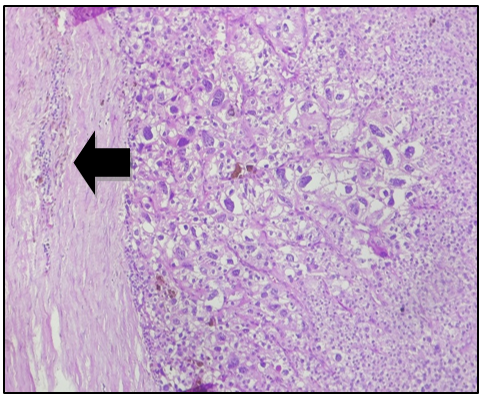 Now question remains if it is SHPT or THPT ??? and why not still be PHPT??

A CKD patient on dialysis developing hyperparathyroidism in the form of kyphosis were more favouring towards SHPT over PHPT. Though the scans were more in a favour of PHPT. Modalities such as ultrasonography, 99m Tc-MIBI DPS, SPECT/CT have high diagnostic value in detecting PA. 90% sensitivity of MIBI scan is reported for detecting PA.7 But has limited accuracy for hyperplasia (PH). Ultrasound has slightly better advantage for hyperplastic lesions.8

Usually intra-operative PTH levels are observed for successful excision of PA. In this case post-operative PTH levels were monitored and observed to be reduced but still above the maximum limit i.e. 483.3 pg/ml (reference value 15-65pg/ml). This also favours SHPT. As we discussed earlier sometimes in long-standing SHPT parathyroid gland becomes autonomous transform into THPT. In such cases Phosphates levels are helpful in identifying THPT over SHPT. (Table 3). So to support this we have high S. Phosphates levels along with high PTH.

But post-operatively calcium was within the normal limit unlikely in THPT. In literature we found that another phenotype called normocalcemic hyperparathyroidism in which increased PTH levels but constantly normal calcium levels. Before labelling this term one has to rule out the causes of SHPT.9 So very unlikely to be this entity. Development of nodular hyperplasia is associated with downregulation of vitamin D receptor (VDR) and calcium sensing receptor (CaSR) as compared to diffuse hyperplasia.1, 2 This may explain the normocalcemic state in our case. The nodularity of gland clearly indicates it’s a progressive state reciprocating with S.PTH levels.

So it becomes important to identify SHPT in early stage to prevent this transformation.

NH is most probable cause of medical treatment failure commonly in SHPT.10 As nodularity progressive gland become resistant and refractory to medical therapy. So they are considered for exploration. In studies diffuse hyperplasia is shown to reduce in size by oral vitamin D pulse therapy.

Common and basic treatment to start with is phosphate diet restriction in combination with phosphate binders are helpful in stage 3, 4 CKD patients. KDOQI guidelines recommend total dose of elemental ca+ provided through calcium based phosphate binders should not exceed 1500 md/day.

Very important therapeutic agent is vitamin D receptor activators (VDRAS) in managing SHPT patients named calcitriol. Effective reduction in PTH levels has observed after administration of these agents. Reducing bone turnover, so as osteitis fibrosa in dialysis patient. But as we know because of downregulations of VDRs, CASRs receptors leads to limiting its use in advanced state or in case of refractory SHPT.

Parathyroidectomy is sometimes considered over medical therapy in patient on prolong dialysis therapy. It shown to be effective in view of symptomatic relief, better survival and decrease in PTH.

Percutaneous fine needle ethanol injections are supposed to selectively destruct hyperplasia especially nodular lesion in enlarged glands. In case of diffuse hyperplasia, they can be treated with medical therapy.

Diagnostic dilemma can be created due to histological similarities between nodular hyperplasia and parathyroid adenoma. Hence data such as history, biochemical profile and radiological studies plays great accompaniment with histopathology to reach to precise diagnosis.

Knowledge of state of hyperparathyroidism can be useful for medical management over surgical interventions and further extending longevity of patients.

LA Stevens O Djurdjev S Cardew EC Cameron A Levin Calcium, phosphate, and parathyroid hormone levels in combination and as a function of dialysis duration predict mortality: evidence for the complexity of the association between mineral metabolism and outcomesJ Am Soc Nephrol20041537709