Introduction: Diseases of the ovary are diversely arising from the different parenchymal tissue components. This span between reactive functional cysts to more debilitating ovarian carcinoma. Ovarian carcinoma is the sixth most common cancer and one of the leading cause of cancer death among female. This study aims to determine the epidemiological and histopathological patterns of ovarian masses in our setting.

Materials and Methods: The study material was all the ovarian tissues biopsy specimen submitted to the Department of Histopathology, Usmanu Danfodiyo University Teaching Hospital, Sokoto over five years. These were fixed in 10% formal saline embedded in paraffin wax, tissue blocks formed and were sections and stained with hematoxylin and eosin on the glass slides. Request cards and case folders were used to extract clinical information. These were reviewed, analysed and presented as frequency distribution figures.

Results: There were 112 ovarian biopsies during the study period. Their ages ranged between 13 and 67 years and peaked in the fourth decade of life. Fifty per cent of all the cases were seen between the ages of 21 and 40 years. Benign neoplastic diseases formed 50% of the ovarian masses and matured cystic teratoma was the most common. Others were reactive and functional ovarian cysts (24.1%), malignant neoplastic conditions (14.3%) and inflammatory / infectious diseases (11.6%). Overall mature cystic teratoma constitutes 27% of the entire ovarian masses.

Conclusions: Matured cystic teratoma was the most common disease of the ovary in our setting, afflicting young female, while malignant tumours dominated by serous cystadenocarcinoma affect the older age group. The fourth decade of life was the most common age of affectation. We advocate for proper histopathologic evaluation of all ovarian masses to arrive at a definitive diagnosis to offer an appropriate treatment modality.

Ovaries are paired female reproductive organs with complex embryology, histo-morphology and functional activity. Correspondingly; ovarian masses manifest a wide variety of diverse physiologic and pathological lesions.1 The physiologic lesions are usually functional cyst and commonly are corpus luteal and follicular cysts arising due to failure of ovulation with unruptured Graafian follicles or ruptured but sealed follicles seen in young female at their second decade of life.2 The pathologic lesions are either neoplastic or non-neoplastic. The non-neoplastic diseases are less common than the neoplastic and include inflammatory and reactive ovarian masses, the inflammatory conditions commonly are component of disseminated infectious diseases of the female genital tract such as tuberculosis.3

The neoplastic conditions of ovarian tissues commonly manifest as cystic multilocular benign masses or less commonly cystic and solid malignant tumours. The tumours may arise from either Mullerian epithelium, germ cell layers or sex cord-stromal component and are classified based on these histogenetic pathways.4 Worldwide, the incidence and prevalence of ovarian cancer vary in different geographical areas; ovarian malignant tumours represent about 27% of all female genital cancers and account for 52% of deaths caused by female genital tract malignancies.5 Ovarian cancer is the sixth most common cancer in female seen predominantly after the third decade of life.6 Ovarian tumours are found to be more prevalent in the upper socioeconomic class and approximately account for two-third of all malignancies in women ages between 40 and 65 years.7

Generally among tumours of the ovary, teratomas are the most common; this germ cell tumour has both benign and malignant counterparts. Benign cystic teratomas account for 10-13% of all ovarian tumours and it’s the most common germ cell tumour.8 Ovarian surface epithelial carcinomas show a wide range of morphologic features some of which overlap with sex cord-stromal tumours and germ cell tumours, and sometimes are difficult to be differentiated from metastatic carcinomas especially the mucinous type.1, 4 Ovarian tumours also show laterality, the commonly serous tumour are bilateral both benign and malignant, while mucinous and sex-cord stromal tumours are usually unilateral.9 The objectives of this study is to document the histopathologic and epidemiologic pattern of lesions from the ovarian masses in our settings.

All ovarian tissue specimen submitted to the Department of Histopathology, Usmanu Danfodiyo University Teaching Hospital, Sokoto, Nigeria over five years; between January 2016 to December 2020. This includes all unilateral or bilateral oophorectomy specimens, salphingo-oophorectomy specimens and total abdominal hysterectomy with salphingo-oophorectomy specimens. These were fixed in 10% formal saline embedded in paraffin wax. Microtome sections were made 4um thick and stained with Haematoxylin and Eosin on the glass slides. These were reviewed by the authors and the various lesions categorized as follows

Epidemiological parameters like age and side, in addition to other clinical information such as duration of symptoms as well as gynecologic history regarding menarche, menstrual pattern, parity, obstetric antecedents and menopause were retrieved from case cards and case folders. Collected data were analysed and presented in frequency distribution tables, figures and photomicrographs with legends

One hundred and twelve ovarian tissue biopsies received in the Department of Histopathology, Usmanu Danfodiyo University Teaching Hospital, Sokoto, Nigeria from January 2016 to December 2020. Of this, 63 cases (56.3%) were from right ovarian tissue, 30 cases (26.8%) were from the left ovary and the remaining cases (18.9%) were of bilateral ovarian tissue. Their ages ranged between 13 and 67 years and peaked in the fourth decade of life. Fifty per cent of all the cases were seen between the ages of 21 and 40 years (Figure 1). The distribution of the various categories of pathologies was presented in Figure 2. The benign neoplastic conditions formed fifty per cent of the entire cases, these include 30 cases of matured cystic teratoma, nine cases of serous cystadenoma, six cases of benign granulosa cell tumours, four cases of benign Brenner tumour, three cases each of mucinous cystadenoma and fibroma/ thecoma and a case of endometriosis in the left ovary of a 35-year-old patient (Figure 3). The reactive lesions were all functional cysts dominated by corpus lutein cysts and other simple ovarian cysts (Figure 4), together these formed 24% of the entire ovarian tissue biopsies analysed. There were 13 cases of inflammatory and/or infectious diseases; this constituted 12% of the entire ovarian lesions. Haemorrhagic necrosis and ruptured ovarian ectopic gestation with subsequent haemorrhage and inflammation predominated in this category; with three cases each; others were two cases each of ovarian tuberculosis and non-specific chronic oophoritis, and a case each of ovarian abscess, fat necrosis and torsion (Figure 5). The malignant neoplastic diseases were dominated by papillary serous cystadenocarcinoma which comprises 69% of the malignant neoplastic lesion and formed 10% of our entire ovarian masses histologically, others were immature teratoma (13%), and six per cent each of ovarian mucinous cystadenocarcinoma, embryonal carcinoma and choriocarcinoma (Figure 5).

Age group distribution of all the ovarian masses 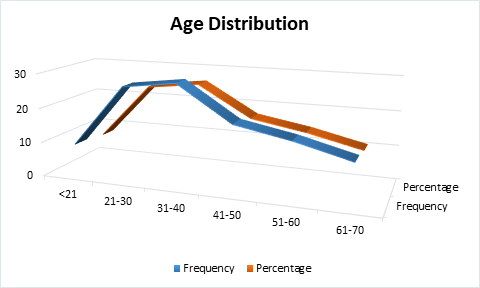 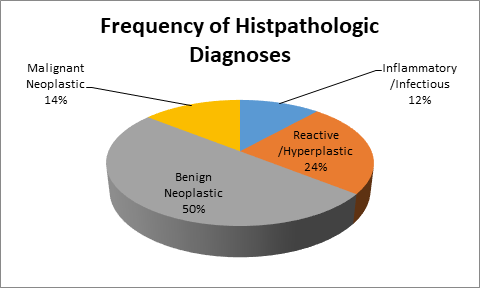 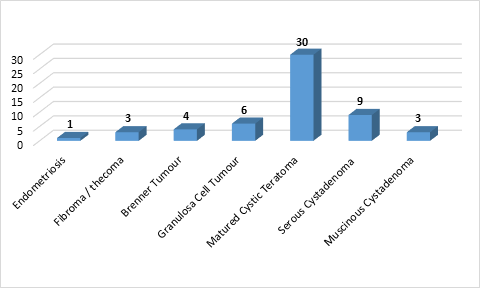 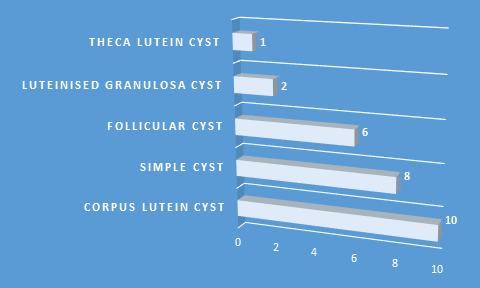 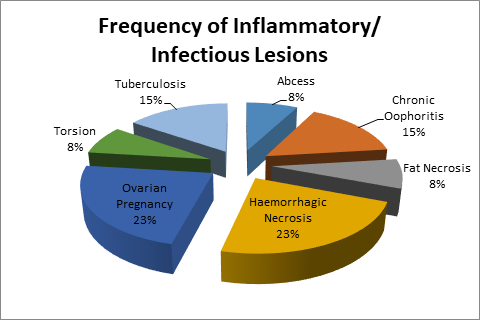 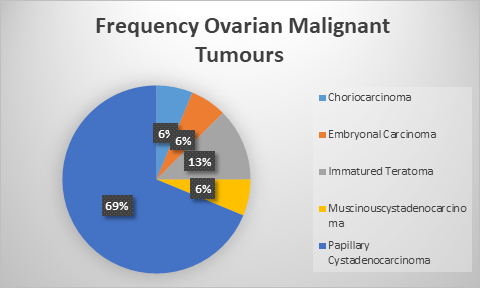 Ovarian lesions used to be the most common cause of lower abdominal mass, discomfort and occasionally pains in young to middle-aged women. Arriving at a definitive diagnosis of such lesions can only be achieved by the histologic examinations of the tissues removed surgically. 1, 4 These lesions can be seen from early childhood to late older age group, but commonly during childbearing age brackets.10 Fifty per cent of our cases were between the ages 21 to 40 years, this is comparable to the report of 47.5% in the same age group by Manoja et al from India, while much higher incidence (65.3%) in the same age group were recorded by Forae et al here in Nigeria. The paediatric age group of fifteen years and below were less commonly affected (2.7%) in this study and all were cases of matured cystic teratoma affecting older paediatric age of 13, 14 and 15 years. A study by Ajeet et al. reported a similar, though slightly higher incidence of four per cent ovarian lesions among children in their study of ovarian lesions in India.7 Suk et al. reviewed a similar pattern of age group predilections in a Korean population and emphasised the distinct incidence, pattern of histopathological distribution and clinical presentations of ovarian lesions among children from that of an adult.11

In this report, we have documented a wide range of histopathologic diagnosis with the most common lesions being benign neoplastic diseases and matured cystic teratoma was the most common. The distribution of the various categories of lesions was comparable to the studies by Forae et al in South-south Nigeria,10 Karli et al in Turkey,1 Tadayo et al in Iran,15 Phukan et al in Eastern India,16 and that of Prakash et al in Hydrabad India,17 while the most common lesion in the Nigerian study was germ cell tumour similar to the index study, that of the other parts of the world was dominated by serous cystadenoma; a benign tumour of surface epithelial origin. Contrary to these was reported by Mondal et al in another region of India, whose predominant lesion was an ovarian malignant neoplastic disease; serous cystadenocarcinoma.12

Matured cystic teratoma, a germ cell tumour seen commonly during childbearing age is the most common benign tumour of the ovary and constitutes 10-20% of all ovarian tumours.18 It is also the most common germ cell tumour and is bilateral in 14-18% of cases.19 Matured cystic teratoma was the most common histopathologic diagnosis seen in this study; this finding is in keeping with the reports elsewhere but sharp contrast to the study by Force et al in South-south Nigeria. In the later report, non-neoplastic functional cysts were the dominant histopathologic diagnosis.20 Bohara et al also reported serous cystadenoma; a benign surface epithelial tumour as the most frequent histologic diagnosis in their centre.21 Other benign tumours seen in this report were serous cystadenoma, benign Brenner tumour, mucinous cystadenoma and fibroma/thecoma, in quite a similarity to the study by Agrawal et al.22 Among malignant tumours, serous cystadenocarcinoma; a malignant surface epithelial tumour predominated other tumours such as immature teratoma, choriocarcinoma and mucinous cystadenocarcinoma. Serous cystadenocarcinoma was similarly reported as the dominant malignant tumour in an Indian population by Shirish et al.13

The reactive lesions were dominated by the functional cysts removed to relieving pain and associated discomfort and more importantly to rule out more serious inflammatory or neoplastic lesions with debilitating consequences.1, 4 These cysts are usually multiple ranging in size from regular less than two centimetres to larger ones causing abdominal swelling and discomfort, sometimes for the functional ones causing menstrual irregularities. Generally, ovarian tumours were found to be more prevalent in the upper socioeconomic groups and accounted for up to two-thirds of cancers in the age bracket of 40-65 years.6, 7 The incidence of ovarian tumour starts to rise from 30 years and increase progressively depending on nature and biological behaviour to peak in some instances at 60-70 years.4 The different types of ovarian tumours are prevalent in different age group. While ovarian germ cell tumours peaked in the second decade of life, the sex cord-stromal tumours occur averagely in the fourth to fifth decade of life, for surface epithelial tumours, the median age of presentation is 60-65 years.2

In conclusions, we have documented a wide range of diseases affecting the ovary in our settings. From simple ovarian cysts to some infectious diseases and more debilitating malignant tumours with a guarded prognosis. Matured cystic teratoma was the most common disease of the ovary in our setting, affecting young female. Proper histopathologic evaluation of all ovarian masses to arrive at a definitive diagnosis to offer appropriate treatment modalities to each category of pathology is therefore of paramount importance.