Gogoi, Das, Borgohain, Gogoi, and Das: Ki67 and P53 expression in breast cancer and their correlation with clinicopathological parameters

Introduction: Breast carcinoma is the most common malignancy in females and is a leading cause of death. Treatment depends upon various pathological and prognostic markers like lymph node status, size, type and grade of the tumour which influences the outcome of breast cancer. Markers like Ki-67 and p53 have been studied extensively and their roles in breast cancer are yet to be established. We evaluated the expression of Ki67 and P53 in breast cancer and their association with other clinico-pathological factors was studied.

Materials and Methods: Ki67 and P53 expression was assessed in 60 breast cancer cases admitted to our hospital over a period of one year. Association with other prognostic parameters was evaluated. Statistical analysis was done by Chi square test and a p value of <0.05 was taken as significant.

Conclusion: Ki67 and P53 may be considered as a valuable biomarker in breast cancer patients which can help in planning treatment strategies.

Breast carcinoma is the most common malignancy in females worldwide and is a leading cause of death in women.1 It now represents one in four of all cancers in women.2 The treatment of breast cancer depends on various pathological and clinical prognostic markers. These include lymph node status, size, type and grade of the tumour which influence the outcome. Hormone receptor status [including the estrogen receptor (ER) and progesterone receptor (PR)] and human epidermal growth factor receptor 2 (Her2/neu) expression are universally used as biomarkers for breast cancer which are analysed using Immunohistochemistry (IHC).3

These biomarkers are used as a prognostic indicator as well as a predictor of response to hormonal and chemotherapy and helps in deciding the adjuvant therapy of breast cancer. Apart from ER, PR and HER2/neu, there are various other markers which have been widely studied in order to assess their relationship with the clinicopathological parameters of breast cancer and also to assess their role in deciding the treatment and in influencing the outcome. Two such markers are Ki-67 and p53 which have been studied extensively and whose roles in breast cancer are yet to be established.4

Ki-67 is a labile, nonhistone nuclear protein that is tightly linked to the cell cycle and is expressed in all continuously cycling cells of mid-G1, S, and G2 phase and in mitosis, but not in quiescent or resting cells in the G0 and early G1 phase. As this protein is present in all proliferating cells, it may serve as a marker to evaluate the growth fraction of a given cell population.5 Even though there are several published papers evaluating the prognostic role of Ki-67 in breast cancer, it is still not considered as an established marker to be used in clinical practice. Therefore, understanding the association of Ki-67 with pathological characteristics (including histological grade, tumor size and lymph node metastasis) and immunohistochemical indexes including ER, PR and HER2 status is impor­tant for clinical evaluations and guiding treatment strategies.6

The p53 gene is a tumor suppressor gene that is located on the short arm of chromosome 17 (17p31.1). Because a mutated p53 gene produces proteins that are not degraded as quickly as the wild type protein, p53 protein accumulate and can be detected by immunohistochemistry. Through its target protein it helps in DNA repair, senescence, aging, differentiation, cell adhesion, cell mobility, membrane functions, metabolism and autophagy.7

Even though p53 expression is associated with poor outcome in breast cancer, its vitality as a prognostic marker has been controversial and has not been recommended for routine clinical use. Thus the study of this marker and its impact on breast cancer prognosis is important for its potential clinical utility which might contribute to further advances in deciding treatment strategies.8

The aim of this study is to evaluate the expression of Ki-67 and p53 in breast cancer and to correlate these markers with various clinicopathological parameters.

The study was undertaken at a tertiary care hospital in Dibrugarh. A total of 60 invasive breast cancer cases which were diagnosed over a period of one year between June 2016-May 2017 were included in this study. Detailed history, clinical data and laboratory investigations were collected for each cases. Haematoxylin and eosin stained sections were examined and tumours were categorized according to WHO Classification of tumours. Each case was histologically graded according to Modified Bloom Richardson System. Clinicopathological parameters including age at diagnosis, tumour size, histological type, tumour grade and lymph node status were considered.

3-5 mm sections of the representative area of the tumour from the paraffin embedded blocks were taken for immunohistochemical studies using a rotary microtome (LEICA RM 215RT). Slides were deparaffinized in 2 changes of xylene and then rehydrated through a series of graded alcohol (absolute, 70 & 50%). An antigen retrieval system was used for optimal retrieval of epitopes. Blocking of endogenous peroxidase activity was done by adding peroxidase blocking agent. Sections were incubated with relevant primary antibodies (ready to use with biogenes detection system) in a humid chamber which was followed by incubation with secondary antibody (polymer Horseradish peroxidase) and freshly prepared Diaminobenzidine chromogen. The slides were then counterstained with hematoxylin.

The percentage of Ki-67-positive cells was determined in 10 high power fields by counting no less than 1,000 cells in different areas of each section. Only tumor cells with nuclear positivity were considered for the score.

The Ki-67 labelling index is defined as the percentage of positively stained tumor cells among the total number of malignant cells assessed.

The tumours expressing Ki-67 were divided into two groups:

p53 values were expressed as the percentage of positive cells in each case and then the p53 staining pattern was divided into three groups:

Statistical analysis was done by using Chi square test. A p value of <0.05 was considered as significant.

P53 expression in breast cancer and correlation with clinico-pathological parameters

Correlation of Ki67 with P53 expression in breast cancer

Correlation between P53 expression and Ki-67 LI in breast cancer 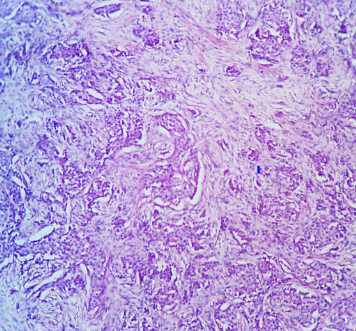 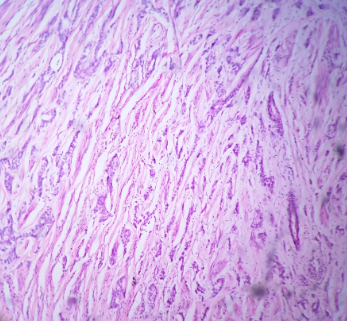 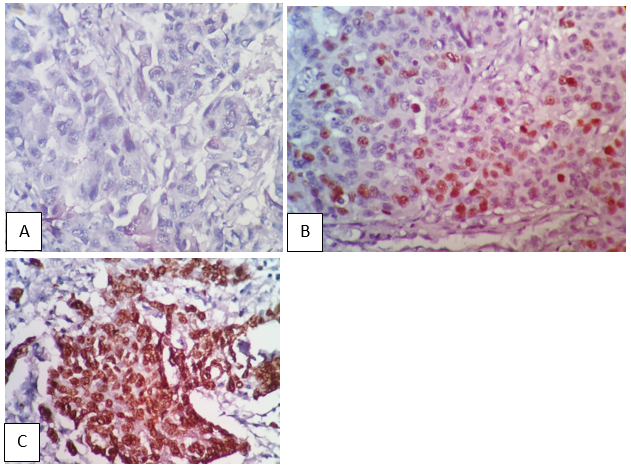 The present study was carried out in a tertiary care hospital, Dibrugarh, from June 2016 to May 2017 over a period of one year. A total of 60 breast cancers were studied during this period.

Clinical history and routine investigations available with the patients were recorded. Histopathological examination of the tissue specimens received was done. Immunohistochemistry was done with Ki-67 and p53 to look into the expression profile in neoplastic lesions and its correlation with clinicopathological parameters in breast cancers was analysed. The results obtained were compared with those of other similar studies done by previous workers.

In the present study, 56.67% of the breast cancers were highly proliferative while 43.33% cases had low Ki 67 proliferative index which is similar to the studies done by Madani SH et al.,12 Wang XZ et al.,10 Payandeh et al.13 and Hassan I et al.14 Also the mean Ki LI was found to be 28 (±20.27) with a range of 2–80%. According to various literatures, the cut off for Ki-67 LI has varied from 5 to 30%. Since there are no fixed standards for the Ki-67 cut-off value and also because of the use of different antibodies, there are variations in the findings of Ki-67 LI scores among the various studies.

Among the immunohistochemical markers studied, a statistically significant negative correlation was found between Ki67 and ER/PR status and a positive correlation was found with Her2/neu. This is similar to the findings of Madani et al,12 Kilickap et al,15 Nishimura et al,16 Inwald EC et al9 and Haroon S et al.4 Higher Ki-67 LI was seen in tumours which were negative for ER and PR. Also, it was seen that higher Ki-67 proliferation was seen in tumours showing higher expression of Her2/neu.

In the present study, higher Ki-67 LI was seen in tumours with positive lymph node involvement, higher histological grade, negative ER and PR status and with positive HER2/neu expression all of which are poor prognostic factors in breast cancer.

In the present study, a significant positive correlation was found between p53 expression and lymph node status. This is similar to the studies of Kikuchi et al,11 Payandeh et al,13 Al-hamadami HA et al17 and Abdollahi et al18 where the expression of p53 increased with increasing number of lymph nodes involved.

A significant inverse correlation was found with ER and PR status and a significant positive correlation was found with Her2/neu status. Higher expression of p53 was seen in tumours which were negative for ER and PR. Higher expression of p53 was seen in Her2/neu positive tumours. This is similar to the studies of Kikuchi et al, 11 Payandeh et al, 13 Abdollahi et al 18 and Yamashita et al. 19

In the present study, higher p53 expression was seen in tumours with positive lymph node involvement, higher histological grade, negative ER and PR status and with positive HER2/neu expression all of which are linked to poor outcome in breast cancer.

In the present study, a positive significant correlation was seen between Ki67 and p53 expression. Thus Ki-67 proliferation was more in tumours with higher expression of p53. This is similar to the studies of Madani et al,12 Nishimura et al,16 Kikuchi et al,11 Payandeh et al13 and Yamashita et al.19

Although prognostic and predictive values of Ki-67 and p53 are well established, the clinical utilities of these markers are more useful in the combination with other prognostic markers especially hormone receptor status and HER2neu expression. In the present study, it was found that both high Ki-67 index and p53 expression was significantly associated with positive lymph node status, high histological grade, ER, PR negativity and positive HER2/neu expression all of which are poor prognostic factors. Immunohistochemical determination of the Ki-67 proliferation index should be performed in cases of breast cancer, to obtain clinically useful information on tumour aggressiveness as reflected in their proliferative rate. Ki-67 can be used as an independent predictive and prognostic marker in managing breast cancer patients and as a predictor of response to hormonal and chemotherapy. Determination of the p53 status may be used as a biological marker to identify those patients who would benefit from more aggres­sive treatments. Easy availability in all laboratories and better standardization are required for their routine use. However, a much larger study needs to be done over a longer period of time with inter laboratory standardization to truly determine the value of these biomarkers as a diagnostic and prognostic tool in breast cancer.