Introduction: Oral cancers are one of the 10 leading cancers in the world. However, in India, it is one of the most common cancers and constitutes a major public health problem. Oral squamous cell carcinoma is a well-known malignancy that accounts for more than 90% of all oral cancers.

Materials and Methods: The study is carried out on 40 biopsy samples received on oral mucosa, in Department of Pathology of our institute.

Conclusion: Ki-67 acts as an excellent marker of cellular proliferation. There is a statistical difference in KI-67 overexpression between various grades of oral squamous cell carcinoma and normal oral mucosa (p value <0.05).

Oral cancers are one of the ten leading cancers in the world. However, in India, it is one of the most common cancers and constitutes a major public health problem.1 Oral squamous cell carcinoma is a well-known malignancy that accounts for more than 90% of all oral cancers.2 Some of the important risk factors for oral squamous cell carcinoma are use of tobacco or betel quid and regular drinking of alcoholic beverages. The mutagenic effects of tobacco, alcohol, betel quid or areca-nut are dependent upon dose, frequency and duration of use and are accelerated and exaggerated by the concurrent use of two or more of these agents.3 However, high-risk human papillomavirus (HPV) genotypes also appear to play an etiologic role in many cancers of the oropharynx and possibly a small subgroup of cancers of the oral cavity.4 The mean age of occurrence of cancer in different parts of oral cavity is usually between 51-55 years in most countries. The tongue is the leading site, among oral cancers, in India. Other important sites in Asian countries include the buccal mucosa and gingiva. The 5 year survival rate has been low for oral cancers, despite improvements in diagnosis and treatment.5 Generally oral squamous cell carcinomas metastasize early and are associated with a poor survival rate. Their prevention largely depends on timeous identification of precancerous oral mucosal lesions, which may present clinically as a homogeneous or nodular white plaque (leukoplakia), a mixed white and red lesion (erythroleukoplakia) or a homogeneous or nodular red lesion (erythroplakia). Red premalignant lesions, generally, have a higher malignant potential than white lesions.6 Oral squamous cell carcinoma in its initial stages shows an erytholeukoplastic area without symptoms, but in advanced stages there are ulcers and lumps with irregular margins, which are rigid to touch. The differential diagnosis should be established with other oral malignant diseases such as lymphomas, sarcomas and metastasis, which have rapid growth rates as opposed to the typical Oral SCC.7 Ki-67 is a cell cycle associated human nuclear protein present in peri-chromosomal region, the expression of which strictly associated with cell proliferation and which is widely used in pathology as a proliferation marker to measure the growth fraction of cells in human tumors.8

The present study was done to assess the expression of KI-67 immunohistochemically in various histological grades of oral squamous cell carcinoma (OSCC) cases in various sites of OSCC.

The study is carried out on 40 biopsy samples (38 cases of biopsy proven squamous cell carcinomas and 02 normal oral mucosa biopsy specimens) of oral mucosa, in our Department of Pathology. Tissue fragments were fixed in 10% formalin and processed by the usual histopathological technique for paraffin embedding and H&E staining. Clinical and histological data were analyzed and the classification of lesions was done. The immunohistochemical processing was made on serial sections, using with DAKO FLEX monoclonal mouse antihuman Ki-67 antibody, and the signal detection was performed with DAB (3,3’-diaminobenzidine, Dako).

The criterion used to define KI-67 positive cells was: epithelial cells showing brown nucleoplasm staining. KI-67 activity was quantified by selecting the most densely and evenly labelled areas in the sections and assessing the labeling index (LI) from the ratio of number of cells stained by KI-67 to the total number of cells (minimum of 1000 cells in two to four consecutive fields at high power (40X), the result being multiplied by 100. 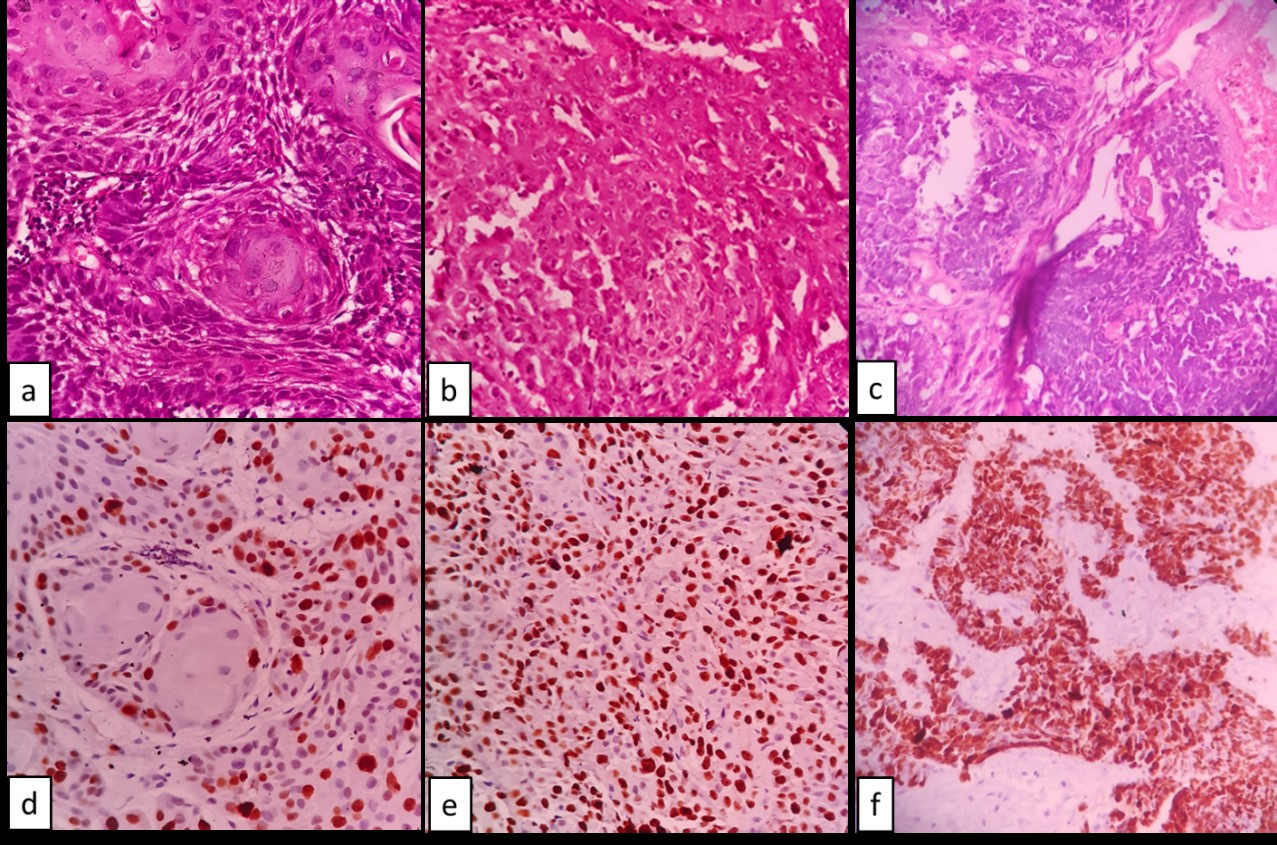 Distribution of OSCC cases according to site in oral cavity

In present study, age range for OSCC were from 2nd decade to 8th decade with maximum number of cases in 3rd to 6th decade; whereas Sharma P et al9 observed that large number of cases developed in the 4th and 5th decades of life. Shenoi R et al1 found the largest number of cases were in age group of 51-60 years followed by age group 41-50 years. Krishna Rao SV et al5 observed mean age of occurrence of cancer 51-55 years in most countries.

We found OSCC to be more common in males (31 out of 38 cases); which was concurrent with other studies by Sharma P et al9 who observed 80 oral SCC patients & found that men represented a higher proportion (68.7%) of oral SCCs than women (31.2%) and Shenoi R et al.1 found that OSCC was more common in men.

We observed that OSCC was more common (35 out of 38 cases) in patients with history of tobacco intake/smoking habit; which was similar to study by Sharma P et al9 who revealed that larger number of patients had the smokeless tobacco habit (60%) than the bidi or cigarette smoking habit (36.25%), Shenoi R et al.1 revealed that most of the patients (31.86%) were tobacco chewers; this was followed by those who had the habit of both tobacco chewing and smoking which represented 18.64%. 15.93% were addicted to smoking alone, 15.03% had habit of all the three smoking, tobacco chewing and consumption of alcohol. 7.12% to tobacco chewing and alcohol, 5.42% were addicted to alcohol but were not consuming tobacco in any form. A small group of the patients 5.08% did not have any of these three habits.

Positive Ki-67 staining was seen in all specimens of normal mucosa, WDSCC, MDSCC and PDSCC. We observed Ki-67 LI for normal oral mucosa was 14 ± 5.6%. In well-differentiated carcinoma, the KI-67 LI was 28.52 ± 21.25%, which increased to 42.85 ± 18.2% in moderately differentiated carcinoma and 68.57 ± 17.6% in poorly differentiated carcinoma. We noticed that Ki-67 acts as an excellent marker of cellular proliferation. There is a statistical difference in KI-67 overexpression between various grades of OSCC and normal oral mucosa (p value <0.05). Premalatha et al10 also noted increasing trend in the mean Ki-67 LI with higher Broder’s grade and observed positive association with the histologic grading in human OSCC. Vandana et al11 observed that mean Ki-67 labelling index score was 8.47±1.586 in healthy oral mucosa, 25.5±3.01 in premalignancy, and 29.7±3.04 in squamous cell carcinoma. S. Humayun et al12 studied expression of ki-67 increases as normal oral mucosa becomes dysplastic and undergoes malignant transformation. Janti S et al13 studied highest Ki-67 positive index was for squamous cell carcinoma (64.55 ±23.55%) followed by papilloma (23.33 ± 6.94%), gingival polyps (7.06 ± 7.43%) and gingival hypertrophy (1.40 ± 2.80%). One-way ANOVA showed significant differences in Ki-67 expression between neoplastic and non-neoplastic samples (p<0.05). Olimid et al.14 analyzed Ki67 immunoexpression in 44 OSCCs from various anatomical sites. Ki67 immunoreaction was identified in all analyzed cases and presented an index of proliferation of 22% for well-differentiated carcinomas, 32% for moderately differentiated and 53% for the poorly differentiated ones. Dwivedi et al.15 evaluated layer wise expression of Ki‑67 in oral epithelial dysplasia and in OSCC. The mean Ki‑67 LI was 12.78 for low risk lesions, 28.68 for high risk lesions, 39.45 for OSCC and 13.6 for normal buccal mucosa. Viswanathan V et al.16 evaluated the role and significance of apoptotic indices (AI) and proliferative indices (PI) in premalignant and malignant squamous cell lesions of the oral cavity. PI also was found to increase significantly from 35.58 ± 19.40% in well differentiated carcinoma to 69.10 ± 9.95% in moderately differentiated carcinoma and 85.95 ± 9.97% in poorly differentiated carcinoma. The highest PI was seen in poorly differentiated SCC. Verma R et al.17 reported higher Ki-67 expression was seen in OSCC group as compared to normal mucosa. Rakheja M et al.18 found highly significant correlation was found between Ki-67 expression and the advancing grades of OSCC. H We et al19 found positive expression rate of Ki-67 protein in normal oral mucosa, oral leukoplakia and OSCC was 30%, 56.3% and 79.2%, respectively. The expression of Ki-67 protein was significantly elevated with tumor stage, differentiation and cervical lymph node metastasis (P<0.05). Tumuluri V et al.20 showed that the Ki-67 proliferative indices obtained correlated with the histological grading of OSCC. These results shows that Ki-67 acts as an excellent marker of cellular proliferation and its expression is associated with the progression of the disease.

Our study shows that the tumor cell proliferation as measured by Ki-67 LI at randomly selected fields has a positive association with histologic grading in human oral squamous cell carcinoma and is not associated with patients age and gender of patients. These findings ascertain that Ki-67 antigen can be used to determine the tumor behavior and prognosis in incisional biopsy material. Further studies considering a greater sample size and with other variants of human OSCC should be done to explore differences in their biological behavior and studies correlating the clinical course of the different histological grades of OSCC with their mean Ki-67 LI would be useful as prognostic indicators.