Results: Adult Raillietina sp. possesses carbohydrate, protein and fat. Histologically the mature, immature and gravid segments were differentiated whereas the histochemical techniques qualifies the biomacromolecules. The lipid droplet showed a clear vacuole preferably in and around the periphery portion. The glycogen distributed in an even manner. Subsequently, the protein was deposited mostly at the periphery in the body surfaces as well as in the egg.

According to Anthropological Survey of India study, more than 80% of Indian population is non-vegetarian. A large proportion of non-vegetarians have no religious or social taboo for consumption of sheep, goat and poultry meat. Indian Council of Medical Research (ICMR) has recommended daily allowance of meat as 34 grams per day, whereas in India the per capita meat consumption is as low as 14 grams per day.

Poultry is a very popular source of meat in India because of Its low price and it is easily digestible. Mainly 2 types of poultry are found. One is Broiler fowl and another is Domestic fowl. Among these, domestic fowl is important because poor farmers can easily grow it in house to earn money and food cost of domestic poultry bird is very low as needs no extra feed supply. Cestode parasite is one of the major disease among other parasitic infections. Raillietina sp. is one of the major causative agent of cestode parasite.

No more work has been done on this Raillietina sp in domestic fowl in India. The adult parasite infects the small intestine of fowl, from where it obtains nutrition from the digested food of the host. The tapeworm is responsible for stunted growth of young chicken, emaciation of adult and decreased egg production of hen. In general the tapeworm does not cause gross pathological damages on well nourished chicken, but do compete for food when they grow to excessive number. In such situation, severe lesions on the intestinal walls and diarrhoea could arise, which ostensibly resulted in ill health.

Under heavy infestation, R. echinobothrida is listed as one of the most pathogenic tapeworms, causing conspicuous intestinal nodules in chicken, with characteristic hyperplastic enteritis associated with the formation of granuloma. The symptom is termed as “nodular tapeworm disease” in poultry. Intestinal nodules often result in degeneration and necrosis of intestinal villi, accompanied by anaemia with a significant increase of total leukocyte counts and decrease of total serum protein. The aim of the study was histochemical characteristics of various body parts of Raillietina sp. isolated from gut of country fowl, various levels of glycogen content (Qualitative) in infective stage of the parasite, various levels of muco-protein content (Qualitative) in infective stage of the parasite as well as various levels of lipid (Qualitative) in infective stage of the parasite.

The test samples (Raillietina sp.) were collected from different local markets where the fowl (domestic fowl) were slaughtered for consumption purpose for one year duration. The total sample size was 53. The gut after sectioned was examined by naked eye and the presence of parasites were supposed to be positive and processed for confirmation. Further the parasites were washed and confirmed in our laboratory, Department of zoology, under Serampore College, Dr. William Carey Road, Serampore, Hooghly, West Bengal.

The intact parasites were collected very cautiously, that the rupture of the body prevented, washed under tap water.

The gross pictures of the parasites were undertaken by a digital camera for gross study.

Different body parts like scolex, immature, mature and gravid part were collected, washed under tap water and fixed in 10% neutral buffer formalin for 7 days for histopahology stain in the Department of Veterinary Pathology of West Bengal University of Animal and Fishery sciences. Formalin fixed tissue were processed by routine histopathological techniques. Fixed tissues were washed overnight in running tap water and dehydrated in 70%, 80%, 90% and absolute alcohol. Dehydrated tissues cleared in xylene. Paraffin blocks were prepared and sections of 4 micron thickness were taken by Leica microtome. The sectioned were stained with Haematoxylin and Eosin (H&E) and mounted with cover slip using DPX. The stained sections were examined under microscope.1

The sections of the parasites processed as per histological procedure up to hydration. Deparaffinaised & hydrated to distilled water. Sections were digested with saliva for 1 hour. Washed by tap water. Oxidized in periodic acid for 5mins. Then rinsed in water. Stained with P.A.S reagent for 15 mins. Again stained with Harris Haematoxilin for 5 mins. Then washed in water for 10 mins. Added 1% HCL (acid alcohol) for 5 dip. Washed in water, then in ammonia water. Rinsed in tap water. Dehydrated in 95% alcohol, absolute alcohol, and cleaned in xylene two changes each. Mounted the slide with cover slip with D.P.X. mountant.2

The sections of the parasites processed as per histological procedure up to hydration. Deparaffinised and hydrated to distilled water. Stained with Congo red for 1 hour. Rinsed off excess stain in water, two or three changes. Differentiated in alkaline alcohol solution for 3-5 second. (agitated continuously until the background appears clear). Washed in running water for 5 minutes. Counterstained in Mayer’s haematoxilin for 5 minutes. Washed in running water for 5 minutes. Dehydrated in 95% alcohol, absolute alcohol, and cleaned in xylene with two changes each. Mounted with D.P.X. mountant.3

Young country fowls showed the presence of Raillietina sp. as per availability of birds in various market during the period of one year and were positive with a percentage of 77.36, among 53 screened birds, with 41 number of affected one.

Grossly the tapeworms were shorter, medium with larger variable sizes.

Under the histological studies, it was observed that the entire Raillietina sp. consisted of the immature, mature and gravid portion (Figure 1). In gravid segment numerous variable sizes of eggs were present (Figure 2). 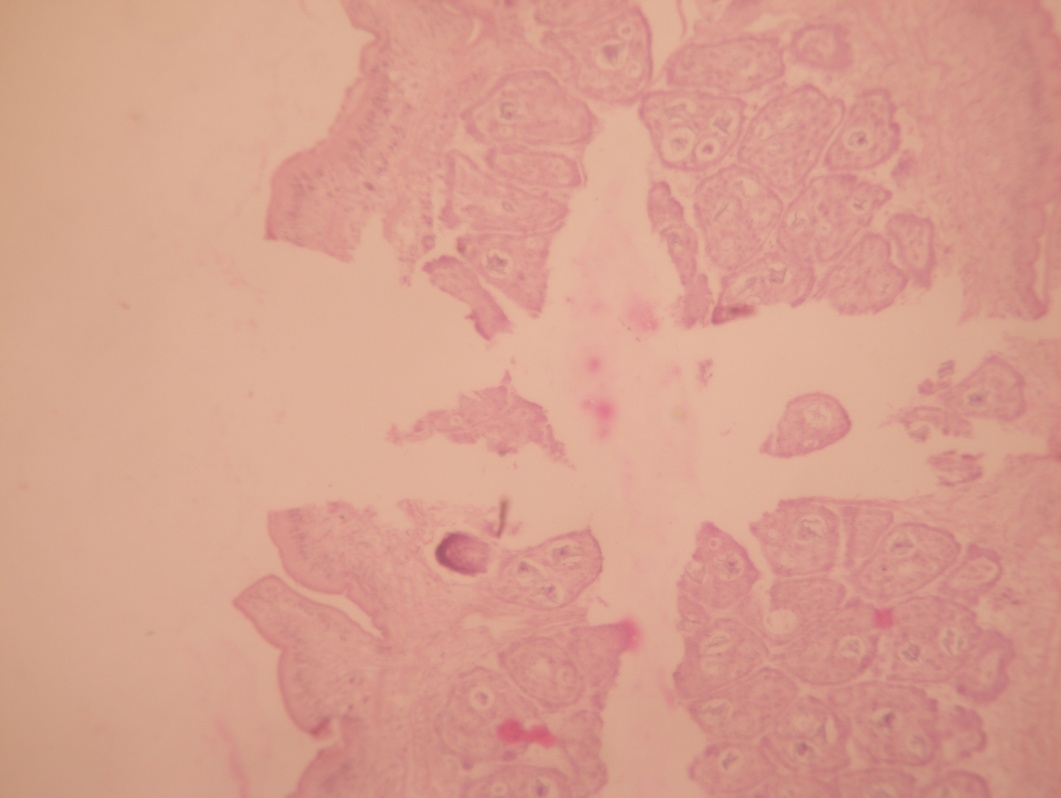 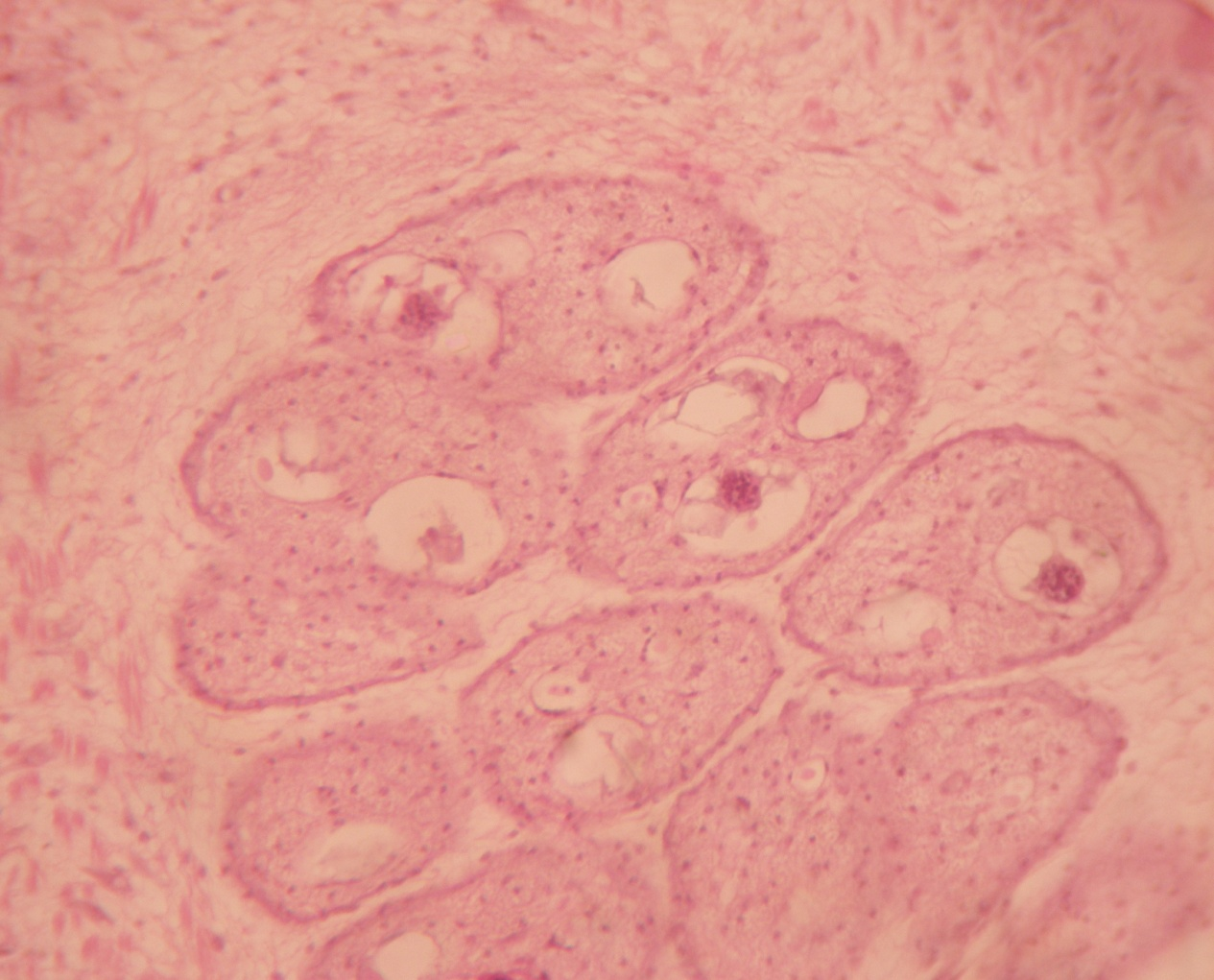 B1) Presence of lipid: During tissue processing, lipid becomes dissolved leaving prominent round vacuoles. It was observed that the clear vacuoles were present throughout the segment. Specially the lipid were more deposited at the periphery of the segment (Figure 3). 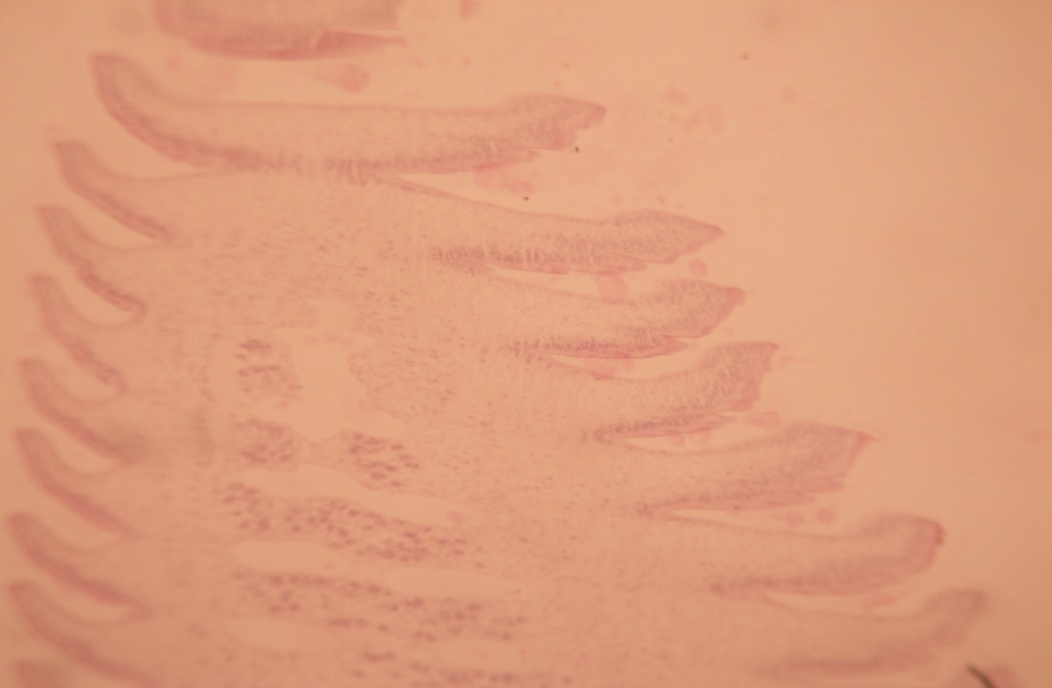 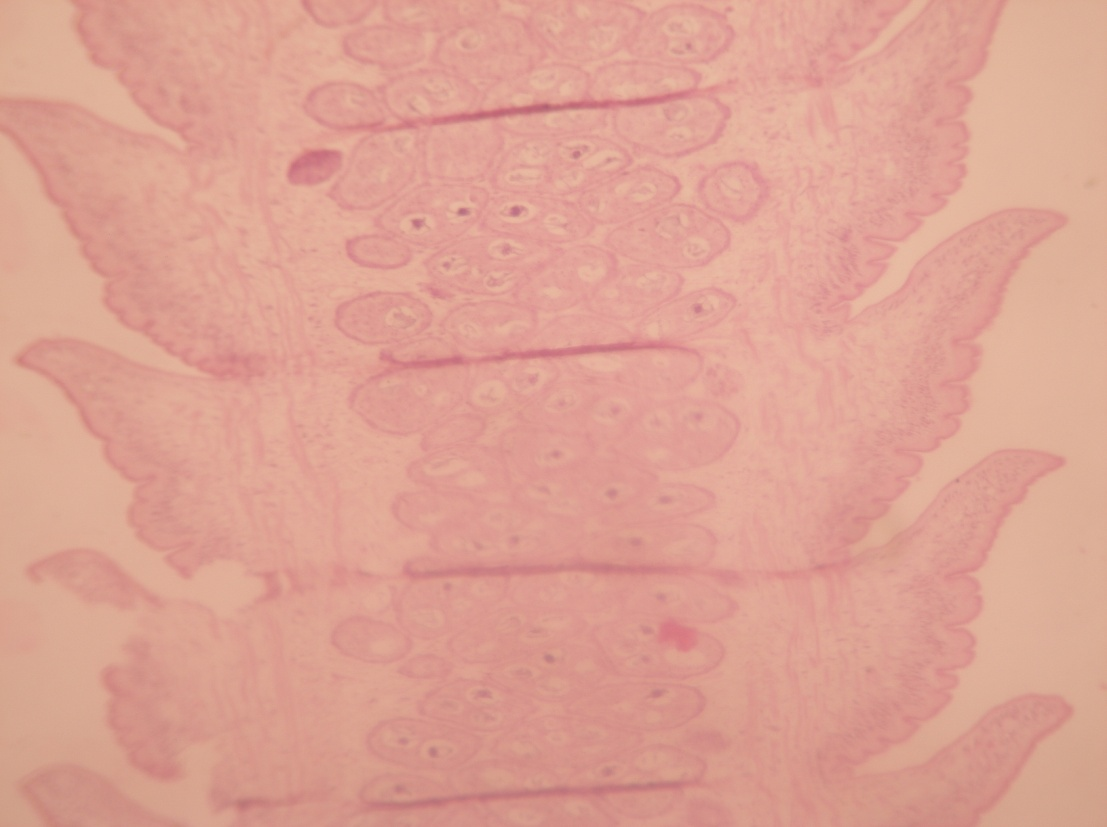 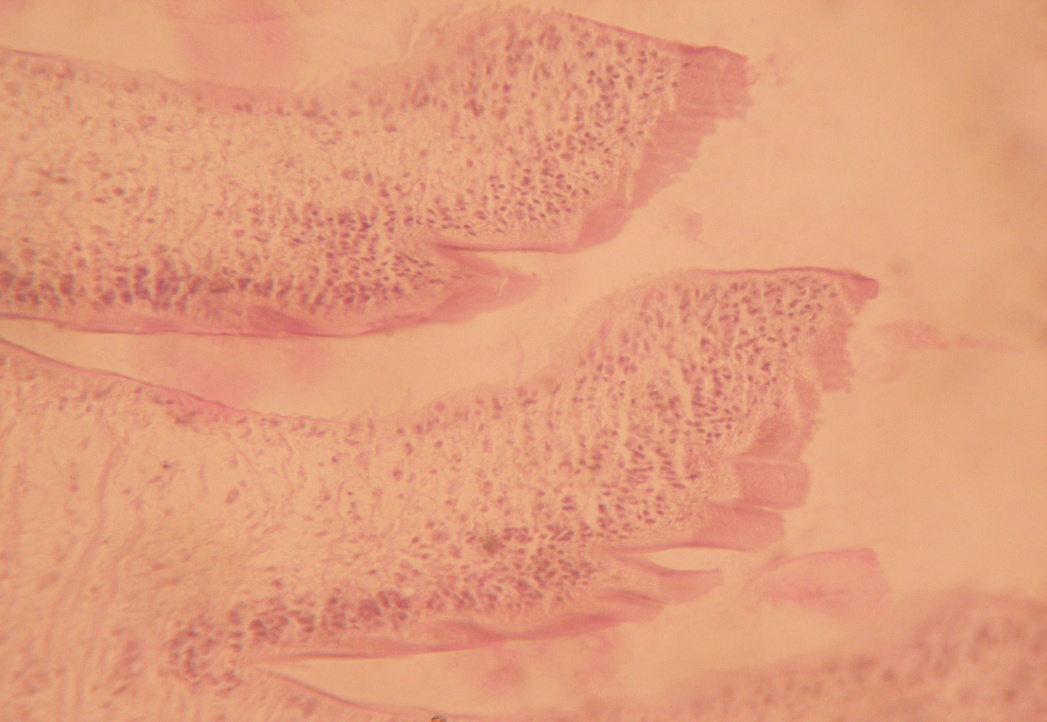 B3) Presence of protein: Under the special histochemical stain, the sections revealed that the immature, mature and gravid segments were positive with a variable degree of red colour (Figure 6), and (Figure 7). It was also seen that the inner structures of eggs contained protein (Figure 8). 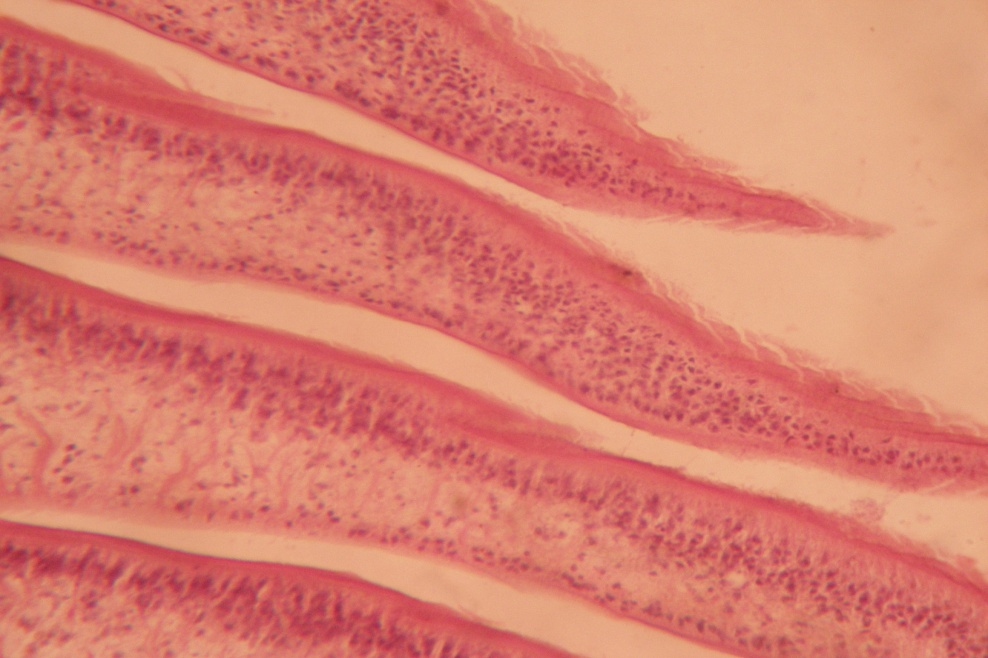 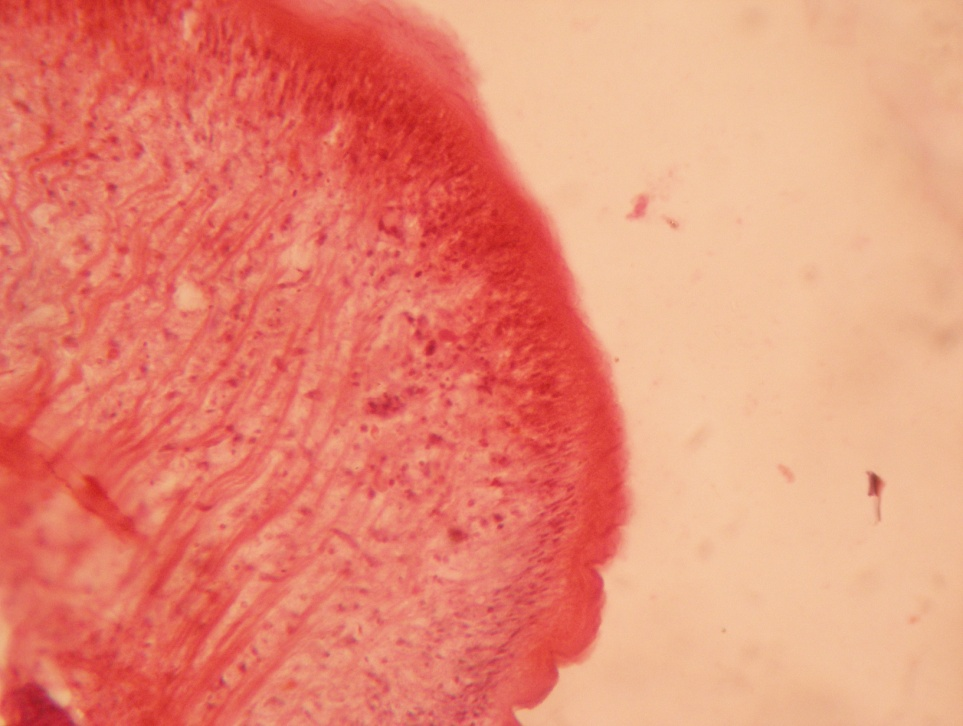 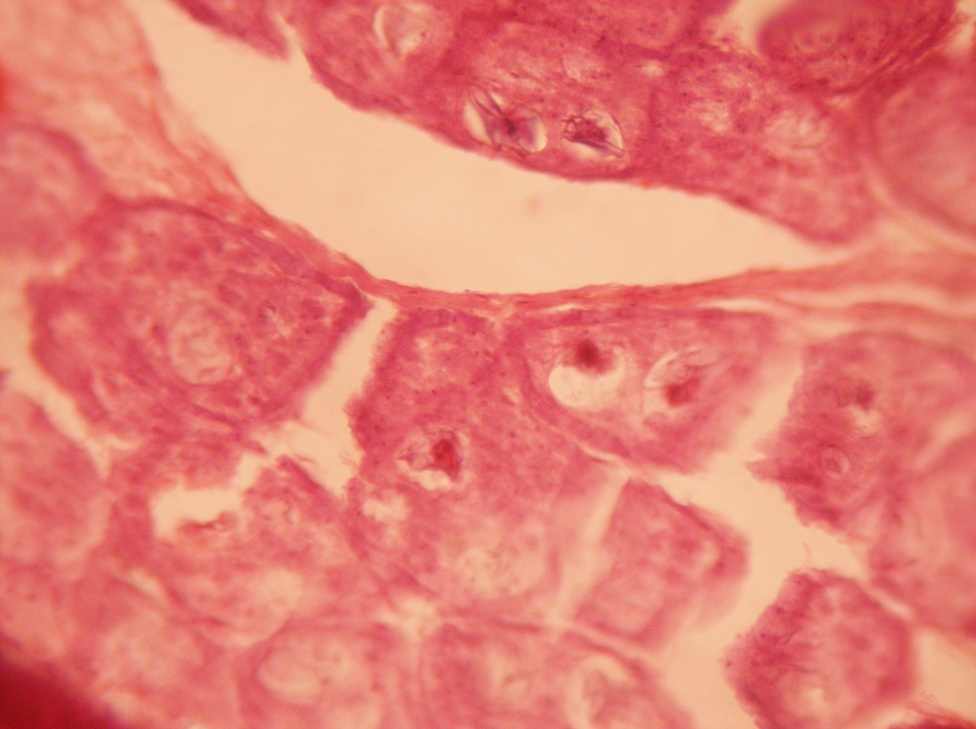 Chickens are the final host of the Rillietina sp. where this adult parasite divides into immature, mature and gravid one. It is clear that the eggs contained maximum amount of lipid in their internal structure. The immature and mature segments possessed lesser glycogen than the gravid segments. However, the periphery of immature and mature segments was intense pink indicating more amount of protein and mucoprotein in constituents. Eggs also contained more protein and mucoprotein. Only the qualitative measurement of the biomolecules present in the parasite were detectable in our laboratory but no quantitative measurement of the same was possible. It is assumed that the fat in eggs provides more protection to eggs in adverse environment.

The Raillietina sp. contains proteins, conjugated with cerebrocyte or glycogen or both which is one of the prominent characteristics of the cestode reported.4 Whereas, the adult parasite of domestic fowl showed glycogen 31.8%, lipid 15.8% and protein 36.4%. and these biomolecules are distributed throughout the body with the variable concentration.5 But no more previous studies are available in this regard.