Anand, Pawar, and Zaidi: Correlation of ER PR receptors with other prognostic parameters of breast carcinoma

Aim & Objectives: To study the MRM specimens for size, grade of the tumor, LVI and LN metastases and the ER/PR receptors of the tumor. To study the association of ER/PR status with the above mentioned prognostic parameters.

Breast cancer is the most frequent cancer in females in the world and is the second most common cancer in India after cervical cancer. The breast cancer is second most common reason of loss of existence in each developed and additionally most of the growing countries.1 For the appraisal of prognosis of breast cancer commonly followed is the Nottingham Prognostic Index (NPI) which includes- tumor size, histological tumor grade, lymph node metastasis and hormone receptor status. These prognostic component help in administration and therapeutic requirement of breast cancer patient.2

In this study we have studied the correlation of ER/ PR status with lymph nodes metastasis, lymphovascular emboli and also with distant metastasis.

ER is the classic and most recounted biomarker that is prevalent in breast tumor. The PR or nuclear receptor subfamily 3, group C, member 3 is a protein present inside the cell.4

Since the breast cancer is a heterogeneous disease, so it is important to decide the ER/PR and HER-2/Neu status in lymph node metastasis, lymphovascular emboli and distant metastasis.6

The decisiveness of ER and PR response in breast cancer is ameliorated medical practices now- a- days, with the useful resource of which it is very convenient to predict the response of the patients. ER status is critical in prediction of the response to adjuvant Tamoxifen therapy, while PR is an ER modulator and additionally and estrogen regulated gene. Simultaneous analysis of ER, PR is more informative regarding the prediction of likely hormonal response because more than half of ER positive tumors are positive with PR expressions.7

Endocrine hormonal therapy for first breast cancers was first started in late 1980 by BEATSON. He located the response in few young females with enhances breast cancer after he performed oophorectomy. Subsequent scientific studies suggest the effectiveness of endocrine treatment on breast cancer patients which reduces the morbidity and mortality. The use of estradiol as treatment has been observed to have a positive impact on premenopausal females. Tamoxifen was initially used as antitestoesteron but later was found to be an effective treatment of breast cancer. So now it comes under category of SERM. Although endocrine remedies are higher tolerated than chemotherapy but may additionally have problems occasional complications like thromboembolic events, uterine cancer and some agent are much less compatible to the patients. Similarly, HER-2 receptor serve as an essential marker for advantages of treatment focused on this receptor tyrosine kinase like Transtuzumab and Lapatinib.6

This study was approved by the Institutional Ethical Committee, IEC number giver was 354/19.

In this three year study we have included 72 histopathological confirmed cases of Breast carcinoma.

The MRM specimen obtained was embedded in 10% formalin, along with the requisition form which included the clinical data of the patient. Grossing of the specimen was done to note down the size of the tumor and other routine details. Apart from those sent by the surgeon the lymph nodes were meticulously dissected in the axillary tail.

The necessary bits were given to prepare the paraffin tissue blocks. Hematoxylin and eosin staining was done on the slides. The slides were examined to confirm and type the breast carcinoma. For ER and PR study the sections were cut at 4 micrometer thickness and mounted onto salinized slide and left to dry overnight at 37°C. Section were the deparaffinized and rehydrated. Antigen retrieval was achieved by heat retrieval using a bench autoclave. Briefly slides were placed in coplin jars containing enough Tris EDTA (Ph-9.0) to cover the sections, then autoclave at 121°C for 15 min for both ER and PR. After washing, the sections were covered by applying 3% H2O2 and the slides were then rinsed with phosphate buffer solution (PBS). Slides were incubated with 100-200 microliter of primary antibodies for 30 min. at 37°C temperature in a moisture chamber, the rinsed in PBS.

Finally, the section was washed 4 times for 4 minutes with changes of phosphate buffer solution, followed by adding 3,3, diaminobenzene tetra hydrochloride as chromogen to produce the characteristics brown stain. The sections were counterstained, dehydrated and mounted for analysis for each run of staining, a positive control slide was also prepared. The positive control slides were prepared from breast carcinoma known to be positive for the antigen under study. The negative control slides were prepared from the same tissue block, but incubated with PBS instead of primary antibody. The tumor size was assessed by specimen. Tumor less than 2 cm taken as T1, tumor size 2-4 cm were taken as T2 and tumor more than 4 cm were taken as T3. Under the Nottingham combined histological system was used for grading. grade 1 carcinoma includes tumor with combined score of 3,4 or 5; Grade 2 includes score of 6 and 7; Grade 3 include tumor with score of 8 and 9. Mitotic index was assessed. Each risk factor was compared with receptor status.

The result of our study showed positive correlation between ER/PR with low grade tumor.

These finding showed the importance of the biomarkers because they provide valuable prognostic information for best treatment decision. Breast carcinoma is the common malignant tumor.

53% cases were between 40-60 year of age and majority (54%) tumors were of 2-4 cm in size. 39% tumors were with grade II carcinoma. The finding in our studies show the negative correlation of ER-PR marker with increasing tumor grade and lymphovascular embolization and lymph node metastasis. The immunohistochemical marker have the prognostic and predictive values. 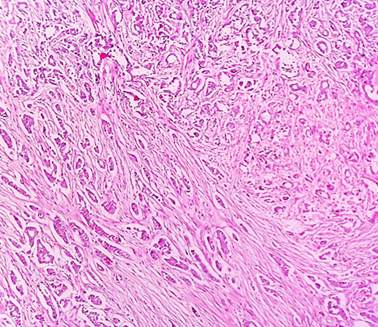 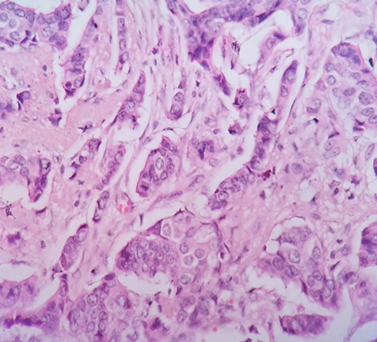 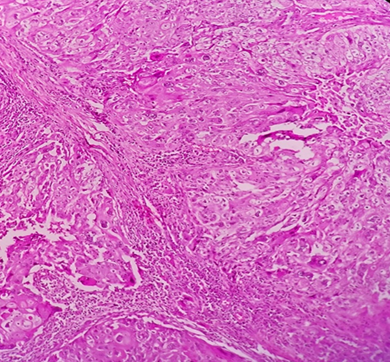 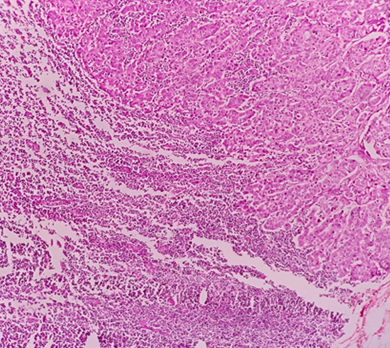 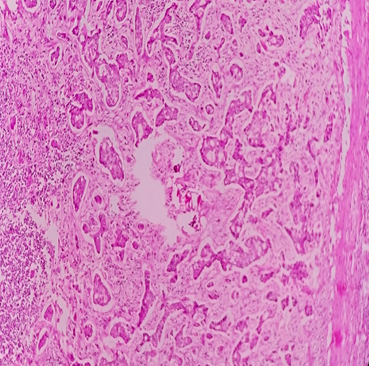 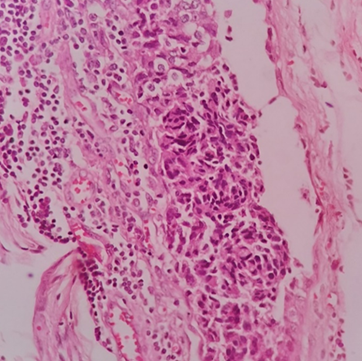 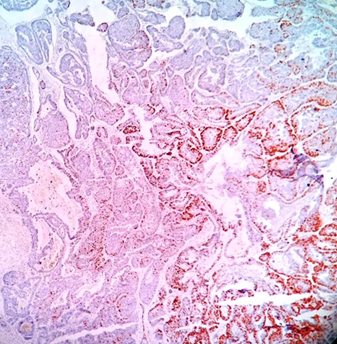 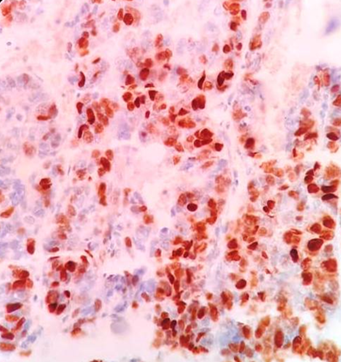 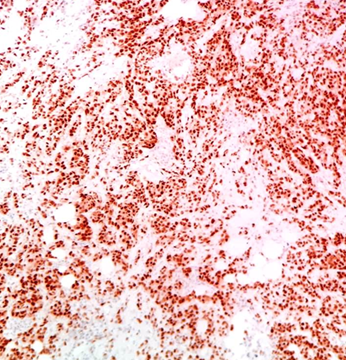 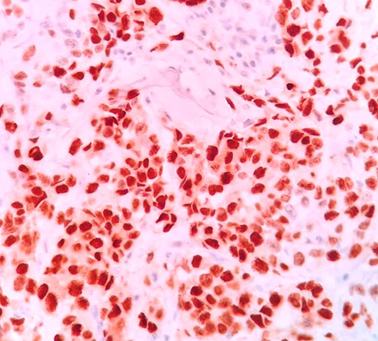 Breast cancer is most common tumor in women. It is highly curable if diagnosis is done an early stage because significant number of cancer patients with early stage of carcinoma possesses microscopic metastasis at the time of diagnosis. For assessing the prognosis and management of the breast cancer ER and PR both markers work as prognostic as well as predictive factors. Correlation of expression of estrogen and progesterone with each other and to various clinicopathological parameters is very significant.5 Estrogen and progesterone status are measured by chemical ligand binding assay are the only prognostic and predictive biomarker recommend for routine clinical use in breast cancer by American pathologist. Both are relatively weak prognostic factor, but strong predictive factor for response to the adjuvant and therapeutic hormonal therapy.

We studied 72 MRM specimens, where the breast carcinoma was common in the age group >40 years (33%). Grade II was the commonest grade amongst the 72 cases (60%), and 54.16 % the tumor size was between 2-4 cm. Similar was the observation was Premchand, Ashok Kumar et al.5 who studied 100 cases and majority (96.82%) of the breast carcinoma was in the age group of >40 years. 43% cases were of grade II tumor and, in 47% cases the tumor size was between 2-5 c.m. According to this, as the size and grade of the tumor increases the ER and PR positive status decreases. Our findings are similar to Mohammad Golam Mostafa where higher histologic grade is poor predictor of hormone receptor status.8

Mohammad Golam Mostafa et al8 had a large sample size of 1042 cases and in 63% cases the tumor was of grade III, the predominantly affected age group was similar showing no lymphovascular emboli and lymph node metastasis. The ER and PR positive status increases with increases in tumor size.

Premchand, Ashok Kumar et al.5 shows similar result with negative correlation with lymphovascular emboli. The result with similar with Asmeron Tesfamarian Sengal et al.1 and there was significant associated between age tumor size and grade, but no associated with lymph nodes. Patient with grade III and young age are more likely to be hormone receptor negative.

According to present study negative correlation is noted in lymphovascular emboli, lymph node metastasis with ER and PR status.