Shylashree, Divya B M, and Nimron: Metastatic mucoepidermoid carcinoma of the lung: A case report

Metastatic mucoepidermoid carcinoma of the lung: A case report

Mucoepidermoid carcinoma (MEC) is a rare form of lung malignancy that is classified into high-grade and low-grade according to its histological characteristics. High-grade mucoepidermoid carcinoma (HMC) is more aggressive form of malignancy which involves lymph node and distant metastasis. Here, we report a 62-year-old female with complaints of dry cough and generalized weakness was diagnosed to have high grade mucoepidermoid carcinoma of lung metastases to lymph nodes, pleura, left adrenal and skeleton. Diagnosis was confirmed by Computed Tomography (CT) which showed numerous lung nodules, biopsy revealing metastatic deposit of mucoepidermoid and Positron Emission Tomography (PET) indicating primary left lung malignancy with metastasis. Despite chemotherapy initiation, the prognosis remained poor.

Mucoepidermoid carcinoma (MEC) of the lung is exceedingly rare which accounts for 0.1 to 0.2% of all pulmonary tumors.1 Its involvement in the lung pleura can result in respiratory compromise and failure. This arises from minor salivary glands in proximal bronchi and are usually central in location adjacent to large airways.2 It was first reported and documented by Smetana in 1952.3 Complete surgical resection, chemotherapy, radiotherapy are the treatment of choice for pulmonary mucoepidermoid carcinoma. The prognosis for HMC can vary, but 25% of these patients develop metastases, especially in lymph nodes, bone or skin.4

a: Histopathological examination shows that Alcian blue stain shows Mucin within the lumen (black arrow) suggestive of Metastatic Mucoepidermoid carcinoma as seen under the Magnification power 200x; b: Histopathological examination depicts cells with mucin and squamous cells (black arrow) as seen under Magnification power of 200x 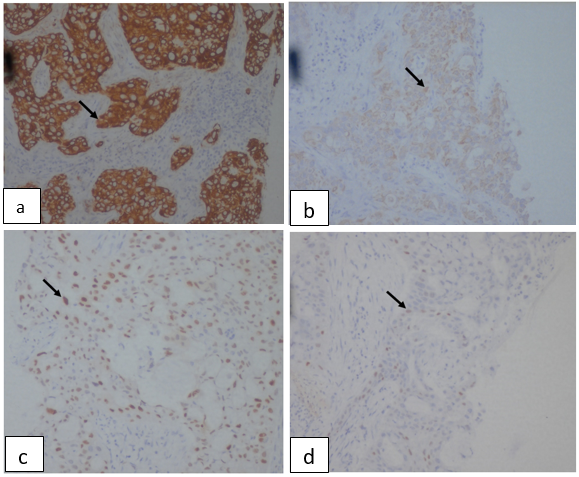 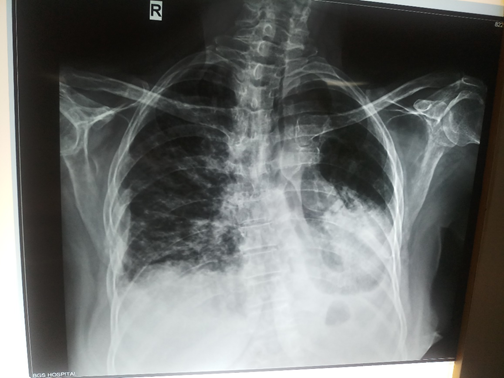 Mucoepidermoid carcinoma (MEC) is the most well-known malignant tumor of salivary gland with a broadly different biologic conduct that is connected with the histological level of the tumor.1 The clinical symptoms and signs incorporate cough, hemoptysis, bronchitis, wheezing, fever, chest pain and rarely clubbing of the fingers. It is commonly seen in young adults, although all age groups (3–78 years) can be affected having female predominance with prevalence most noteworthy in their fifties.5 Mucinous cells, intermediate cells, and epidermoid cells are the three parameters to determine grading which plays an important role in treatment. The high-grade features include necrosis, nuclear pleomorphism, and active mitosis whereas low-grade tumors are typically limited to the bronchus and do not have those histologic highlights as found in high-grade tumors. [6] Patients with low-grade MECs have a generally excellent forecast with a five-year survival rate approaching 95%. In this population, adjuvant therapy is not suggested. Conversely, high-grade MECs convey a lot less fortunate visualization of survival.1 Leonardi et al. conducted a study which included seven patients with MEC, six low-grade and one high-grade lesions that underwent different surgical approaches as a initial treatment. It was inferred that high-grade tumors were impervious to surgical therapy alone or in combination with radiotherapy as observed in this intricate case.6

While it is known that only HMC has tendency for malignancy, Takafumi Nakagakia, et al has reported a rare case of low grade MEC with cervical lymph node metastasis indicating that malignancy do occur in low grade tumors.7 As it is reported by Yiqi Q.Wang et al that MEC usually arises in the parotid and submandibular salivary glands or in the minor salivary glands of the oral cavity and peri maxillary region,8 we present an unusual case on MEC having the primary origin in the lungs with distant metastasis.

While surgery is reserved to treat localized tumor, chemotherapy and targeted therapy is restricted to metastatic condition. Nonetheless, the prognosis stays poor in metastatic disease due to aggressive behavior of HMC. Shoko Sonobe et al. reported a case that carboplatin plus paclitaxel was used for unresectable pulmonary MEC patients with 25 months disease free survival.9

In this report, we present an instance of pulmonary mucoepidermoid carcinoma with distant metastases which is seldom reported. Prognosis of this rare disease is reliant on grade and extent of disease at the time of presentation, and resectability. In most detailed metastatic cases, the clinical course was rapidly fatal. Prior determination would probably improve endurance, and patients would profit from long-term follow-up.