Jagdale and Pol: Primary primitive neuroectodermal tumor of the adrenal gland: A unique tumor at an unusual site

Primary primitive neuroectodermal tumor of the adrenal gland: A unique tumor at an unusual site

Ewing sarcoma/Primitive Neuroectodermal Tumor (ES/PNET) is a malignant small round blue cell tumor of neuroectodermal origin that affects bones and soft tissue in children and young adults. ES/PNET is very uncommon in parenchymal organs. We report a case of primary adrenal PNET in a young female having pregnancy induced persistent hypertension. She underwent right adrenalectomy for a large adrenal mass. On histopathology, it was typical malignant round cell tumor (MRCT). Immunohistochemistry confirmed the diagnosis of ES/PNET with expression of CD99, FLI-1 and NKX2.2. Until now, only 38 cases of primary adrenal ES/PNET have been reported in the English literature with just 5 cases from India. Adrenal ES/PNET can be mistaken with other MRCTs like Non-Hodgkin lymphoma and neuroblastoma. Since the biology, treatment and prognosis of these tumors is entirely different, we emphasize that pathologists must be aware of this possibility and try to differentiate them using ancillary techniques.

Ewing Sarcoma/Primitive Neuroectodermal tumor is a malignant neoplasm derived from the neural crest.1 Earlier considered separate disease entities, Ewing Sarcoma (ES) of bone and extraosseous Primitive Neuroectodermal tumor (PNET) are now considered to be a single tumor type belonging to the Ewing family of tumors.2 ES/PNET mostly occurs in children and young adults and is very rare in visceral locations.1 We report a case of primary ES/PNET of the adrenal gland.

A 28-year female presented with hypertension during pregnancy (G3P3L3, LSCS-3), but was not fully investigated for this during pregnancy. With her persistent hypertension even after delivery, she was subsequently investigated and was found to have a right sided adrenal mass. She was referred to our hospital for further management. She did not have any other associated symptoms.

Her clinical examination revealed a palpable mass in right upper abdomen. Her CT scan showed a large exophytic soft tissue mass epicentered in the right suprarenal fossa measuring 15cm, involving the right kidney and IVC, with an imaging diagnosis of pheochromocytoma or ganglioneuroma. Her routine laboratory investigations were within normal limits. Her 24 hours urinary VMA was within normal limits. Her serum ACTH, serum cortisol and serum catecholamine levels were normal. She was prepared with α & β blockers preoperatively for 10 days and posted for right adrenal exploration. Intra-operatively, the mass was arising from right adrenal gland involving the right renal hilum and encasing the IVC, hence right adrenalectomy along with nephrectomy was performed. Grossly, the adrenal mass measured 16x11x5cm. The external surface showed congested blood vessels. Cut section showed a well circumscribed tumor with variegated yellow greyappearance and extensive areas of hemorrhage and necrosis (Figure 1). The upper pole of kidney and hilum was adherent to the adrenal mass. Cut section of kidney was unremarkable but the ureter showed partly dilated lumen. Microscopy revealed adrenal gland infiltrated by a malignant round blue cell tumor with vague rosettes and areas of geographic necrosis with perithelial sparing of tumor (Figure 2). The tumor invaded the perinephric fat and renal capsule. Our morphology diagnosis was a malignant round cell tumor (MRCT).The clinical and imaging diagnosis of pheochromocytoma was excluded histologically. The differential diagnoses included MRCTs like high grade Non-Hodgkin lymphoma, neuroblastoma, rhabdomyosarcoma, ES/PNET along with poorly differentiated neuroendocrine carcinoma and synovial sarcoma. On immunohistochemistry (IHC), the tumor cells showed a membranous expression ofCD99 and bright nuclear expression of FLI-1 and NKX2.2 (Figure 3). The tumor cells were immunonegative for LCA, Synaptophysin, Chromogranin, Desmin, Myogenin, CK (AE1/AE3), EMA, S-100 and Inhibin (Figure 4). Morphology and IHC confirmed a diagnosis of primitive neuroectodermal tumor of right adrenal gland. Her whole body imaging did not reveal any other lesion elsewhere. Hence, a diagnosis of Primary adrenal ES/PNET was made. Her postoperative recovery was uneventful. She was offered adjuvant chemotherapy IE with VAC protocol. (IE-Ifosfamide & Etoposide)(VAC- Vincristine, Adriamycin & Cyclophosphamide).However, the patient succumbed to disease, a year later after the diagnosis and after two cycles of chemotherapy. 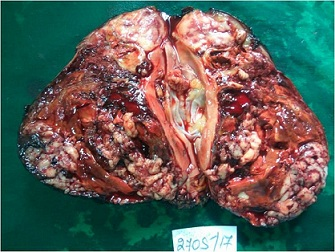 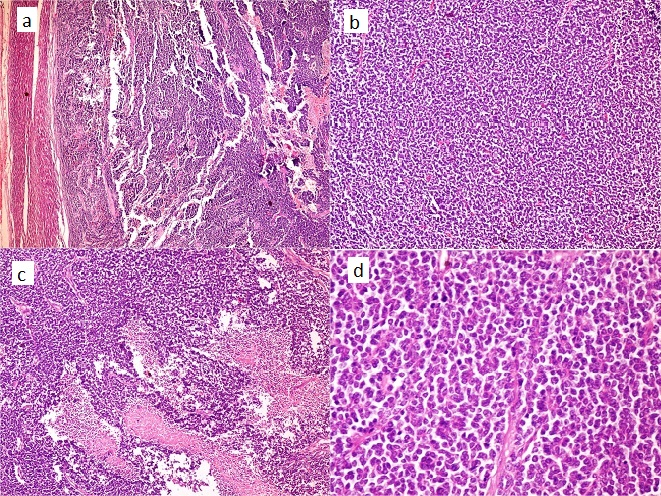 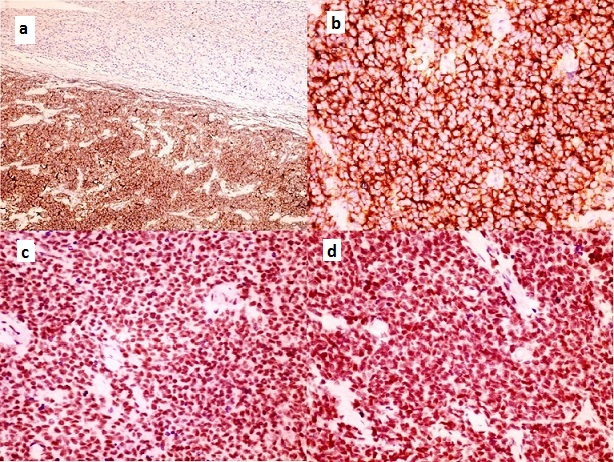 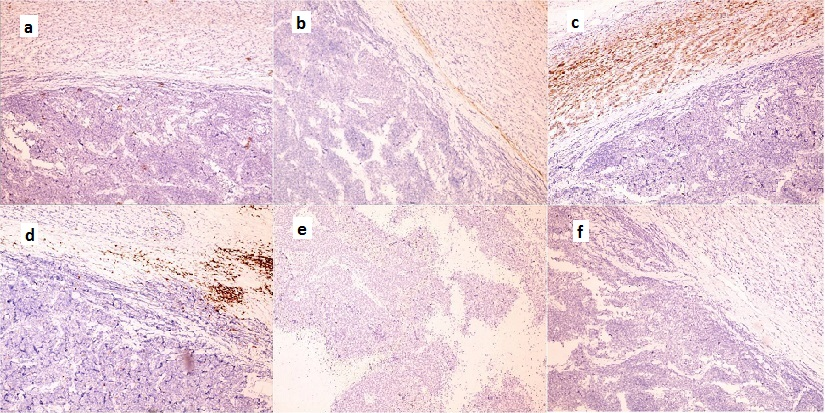 ES/PNET are malignant neoplasms derived from the neural crest presenting in both skeletal and extraskeletal anatomic locations. They share characteristic histological, immunohistochemical and molecular features and thus are now considered part of ES/PNET family of tumors. This family includes ES of the bone, extraskeletal ES or peripheral PNET and PNET of the thoracopulmonary region (Askin tumor).1

ES/PNET may occur at any age, but there is a predilection towards children and young adults with a median age of 24 years.2 There is no sex predilection.3 Extraskeletal ES/PNET affects more commonly the retroperitoneal, paravertebral soft tissues, head and neck region and pelvis. Although various visceral sites of PNET have been described in the literature, adrenal gland is a rare primary location of ES/PNET.1 Ever since the description of first 3 cases of adrenal gland ES/PNET by Marina et al. in 1989, just 35additional cases of adrenal ES/PNET have been described in the world literature taking an overall tally to 38 cases.1, 4, 5, 6 In Indian literature, there are just 5 case reports of Adrenal ES/PNET prior to our case.5, 6, 7, 8, 9

Most patients ES/PNET of adrenal gland present with abdominal pain, abdominal distension, palpable tumor mass and non-specific symptoms like anorexia, weight loss, fatigue and fever.1 However, patients usually show no specific changes in their routine and biochemical laboratory tests.3 On preoperative imaging studies, it usually presents as solitary, round to oval, large, well limited mass with heterogeneous enhancement. Interestingly, our patient had pregnancy induced hypertension which persisted in the puerperal period, for which she was investigated further and found to have adrenal mass on imaging. Grossly, it may have a capsule, hemorrhage, cystic degeneration, necrosis and rarely calcifications.1

Histopathology along with IHC makes the sole approach to the diagnosis and differential diagnosis of ES/PNET. The tumor is composed of small uniform round cells with scanty cytoplasm and dark stained nucleus arranged diffusely or in the form of lobules. It may small focal or massive necrosis. Tumor cells can form classical Homer-Wright rosette or other kind of rosettes. Immunohistochemical tests provide valuable support to the definitive diagnosis.3 CD99 is having a high sensitivity of 95%, however it is not a specific immunohistochemical marker.1 FLI-1 is another sensitive but relatively non-specific marker for ES/PNET.2 NKX2.2 is considered the best marker for ES/PNET with a sensitivity of 80% and a specificity of 84%. So, the expression of CD99 and NKX2.2 is highly specific for ES/PNET.10 Other consistently positive marker includes Vimentin. Markers of epithelial (AE1/AE3 & EMA), smooth muscle (Desmin) and neuroectodermal differentiation (NSE, Synaptophysin, Chromogranin A, CD56 & CD57) display variable results.1

ES/PNET of the adrenal gland is most often misdiagnosed as neuroblastoma (NB) as both tumors share small round blue cell morphology. However, the biology, treatment and prognosis of these two tumors are entirely different. Cure rates are very high even in disseminated cases of NB whereas prognosis is very poor in ES/PNET. Thus, it is critical to differentiate the adrenal ES/PNET from NB. NB is usually associated with high serum NSE and can be diagnosed through urinary VMA/HVA measurement. On IHC, CD99 is positive in ES/PNET and is negative in NB.1 Most childhood adrenocortical tumors are benign, non-functional or functional adenomas. Tumors of adrenal medulla are more common in children and are functional. Adrenocortical tumors and Pheochromocytomas can be easily differentiated from ES/PNET morphologically.1 Differentiation from other MRCTs especially Non-Hodgkin lymphoma is also crucial and can be easily done with the help IHC. In cases of diagnostic difficulty, the diagnosis of adrenal ES/PNET can be confirmed by cytogenetic or molecular studies. The most common mutation occurring in 80% to 90% of ES/PNET is reciprocal translocation t(11;22)(q24;q12) of the EWSR1 gene on chromosome 22 with the FLI-1 gene on chromosome 11 creating the EWS/FLI-1 gene.1 Adrenal being a common site for metastasis, radiological workup to exclude primary elsewhere is advocated before a diagnosis of primary adrenal ES/PNET is made. Due to associated hypertension our case was clinically and radiologically diagnosed as pheochromocytoma. On histology, it was a malignant round cell tumor and pheochromocytoma could be excluded at the morphology level itself. IHC confirmed it as ES/PNET and excluded other differentials. Lack of lesion elsewhere on imaging confirmed a primary ES/PNET of adrenal gland.

Patients with adrenal gland ES/PNET often present with distant metastases, local invasion of the neighbouring organs and less frequently with lymphnode involvement. Probably due to lack of symptoms at the beginning, diagnosis is often made with a bulky disease. The presence of IVC thrombus is familiar with adrenal ES/PNET similarly to renal cell carcinoma.1 Classical management includes radical surgery with neo-adjuvant chemotherapy or radiotherapy or both.1, 10 The most common chemotherapy regimen used is VAC/IE for both localized and metastatic disease.10

Adrenal ES/PNET is a very rare but aggressive neoplasm with a tendency for local recurrence and distant metastasis. Differentiation of adrenal ES/PNET from NB is very critical. A combination of specific histologic, immunohistochemical and cytogenetic findings is helpful in diagnosis. Current management includes radical surgery with neo-adjuvant chemotherapy with or without radiotherapy, often with a poor prognosis.