Mixed germ cell tumours (MGCT) of the ovary are malignant neoplasms of the ovary comprising of two or more types of germ cell components. Most of the malignant MGCT consists of dysgerminoma accompanied by endodermal sinus tumours, immature teratoma or choriocarcinoma. There are only few case reports of MGCTs with different combinations of malignant components. We present a very rare case of malignant MGCT in a 05 years old female child, who presented with difficulty in defecation for 6 months, swelling over sacral region for 2 months, along with bilateral inguinal swellings and difficulty in urination for 1 week. Swelling was firm, non-mobile & non-tender measuring 6.6x5 cm. On cytology it was diagnosed as malignant germ cell tumour, which was confirmed on histology as malignant MGCT (predominantly yolk sac tumour >90% and embryonal carcinoma (<10%)), metastasizing into bilateral inguinal lymph nodes.

Globally ovarian cancer accounts for 2,25,000 new cases and 1,40,000 deaths occurs annually.1 Malignant germ cell tumours (GCT) of ovary, an uncommon neoplasm originates from the primitive germ cells of embryonic gonad. Mostly they occur in the second and third decade of life and accounts for 2–3% of all ovarian neoplasms.2 The survival rates for germ cell tumours have dramatically improved for the past three decades coincident with more aggressive surgical staging and combination therapy.3 World Health Organization (1973) has classified malignant germ cell tumours as endodermal sinus tumour (yolk sac tumour), immature teratoma and dysgerminoma, non-gestational choriocarcinoma, embryonal carcinoma, and mixed germ cell type.4 Malignant mixed germ cell tumour is a type of tumour which consists of two or more malignant germ cell components. These tumours are rare cancers, which are seen in 8% cases of germ cell tumours but are very aggressive in nature.5 The Endodermal Sinus Tumour (EST) and dysgerminoma are the most common combination reported in the literature6 and the embryonal carcinoma and immature teratoma are the rarest combination as its components.4 Embryonal carcinoma, although very rare, but it holds the very malignant potential.7 In review of literatures, teratoma is the most common histology encountered followed by the dysgerminoma.3

Sacral swelling with skin discoloration (a): along with bilateral inguinal swellings (b) 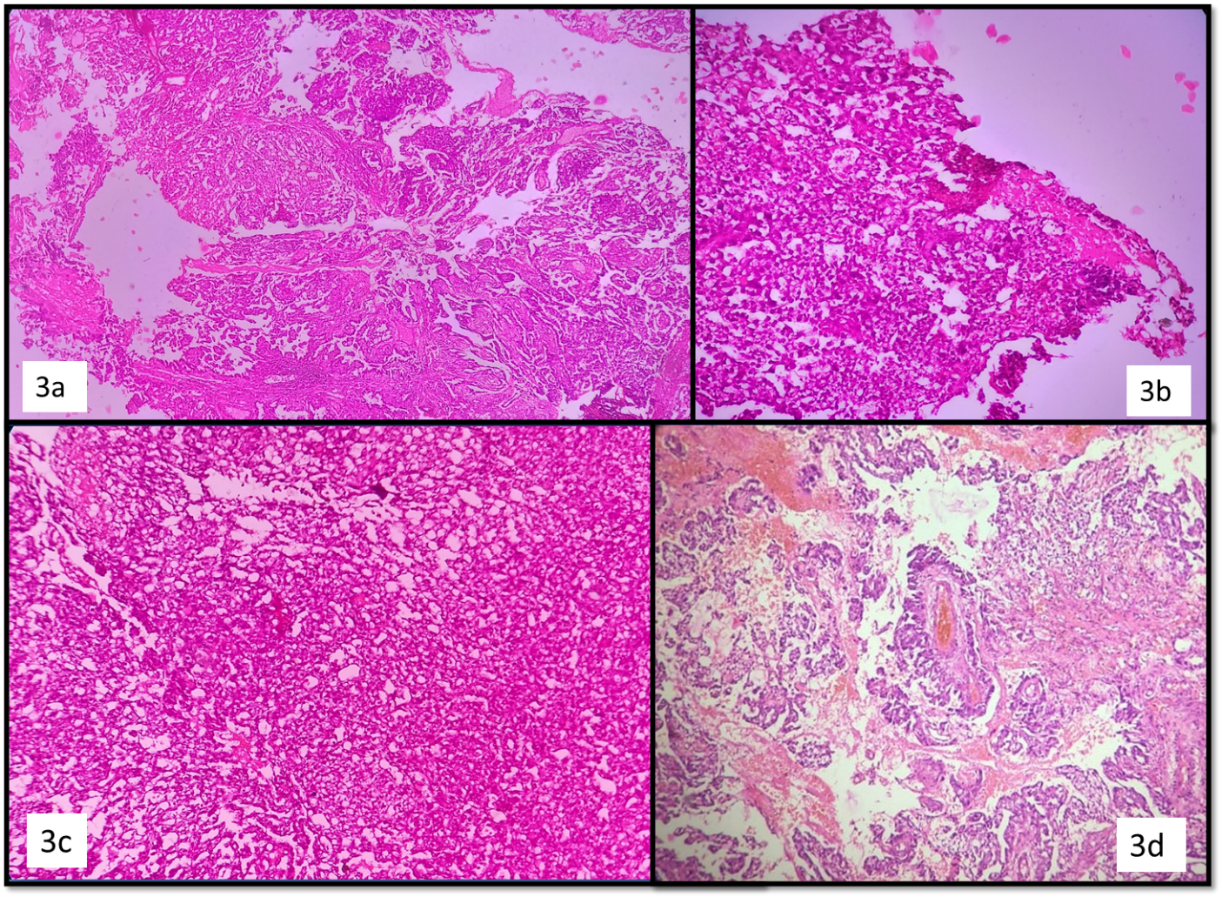 The rare combination of uncommon germ cell components, large sacral mass with bilateral inguinal lymphadenopathy, and very high levels of tumour markers makes this case unusual. The germ cell tumour generally present at an average age of 13.8 years (4–27 years).8 Most commonly patient presents with complaint of abdominal mass which may be associated with or without abdominal pain or fever. Embryonal carcinoma can also present with precocious puberty or irregular vaginal bleeding as it may secrete estrogen.9 Immunohistochemistry is a widely used for the confirmation of diagnosis and to find new management modalities.10, 11 Yolk sac tumour shows positivity for AFP, Glypican-3, SALL4 and LIN 28, whereas in embryonal carcinoma tumour cells are positive for CK (AE1/AE3), CD30, OCT4, SALL4 and Glypican-3.12 Trinh DT et al. has described the utility of tumour markers CD117, CD133, SALL4, OCT4, TCL1 and glypican-3 in the malignant germ cell tumours of ovary.11 Ovarian endodermal sinus tumours are highly aggressive but with surgery and combination chemotherapy, the five-year survival with stage 1 tumours and more advanced disease are 92% and 29% to 44% respectively.13 Survival in embryonal carcinoma the first reported series of 15 patients was 39%, with 50% of stage I patients being disease free at 3.75 to 15 years post-surgery and chemotherapy.14 More recent data illustrate the conservative surgery and combination chemotherapy improves the survival, with survival rates of 98% and 94% for early and advanced stage tumours.15 Elevation of both AFP and hCG levels is a strong predictor of poor outocome.16 Kumar et al. suggested lymph node involvement as an independent predictor of poor survival.17 Pectasides et al. declared that if tumour appears to be confined to ovaries or pelvis, a pelvic and para-aortic lymphadenectomy should also be performed. If upper abdominal involvement is there, an effort to remove all visible tumour should be made. Also, in view of the excellent chemosensitivity, clinical judgment can be used if surgical management would significantly increase postoperative morbidity.18 If infertility is concerned than unilateral oophorectomy and surgical staging is the minimal surgery in ovarian germ cell tumour. Preservation of fertility is recommended even in metastatic disease as these tumours are highly sensitive to chemotherapy. Outcome cannot be changed by hysterectomy and bilateral salpingioophorectomy.10

All contributing authors declare no conflicts of interest.