Magdum, Phadke, Pol, and Kadkol: Cutaneous Malakoplakia of perianal skin: Report of a rare lesion at an unusual site

Cutaneous Malakoplakia of perianal skin: Report of a rare lesion at an unusual site

Malakoplakia is a rare chronic granulomatous inflammatory condition, commonly presenting in immunocompromised patients. It most commonly occurs in urinary tract. The cutaneous form is less frequent. Here, we report a case of cutaneous malakoplakia involving perianal skin in an immunocompetent 61-year old female diagnosed on histopathology utilizing special stains. To the best of authors’ knowledge, this is the 8th case report of cutaneaous malakoplakia of perianal skin in the English literature and 3rd in the Indian literature.

Malakoplakia is an acquired chronic inflammatory disorder described in the bladder by Michaelis and Gutmann in 1902 and later by von Hansemann in 1903 who named the lesion malakoplakia a greek word meaning “soft plaque.”1 Cutaneous malakoplakia is even rarer and was reported by Leclere and Bernier in 1972.2 Though the pathogenesis of malakoplakia remains poorly understood, and it is hypothesised to represent an acquired bactericidal defect of macrophages associated with infection, immunosuppression, and /or in association with autoimmune diseases.1, 3

The most common site is genitourinary tract accounting for 60% to 70% of the cases with 40% cases occur in bladder and very rarely cutaneous forms.1

We report a case of cutaneous malakoplakia involving perianal skin in an immmunocompetent elderly female.

61 year old female presented with pain and itching in perianal region to the dermatologist.On examination multiple, raised, tender papules were noted in perianal region. Dermatologist suspected it as a lesion possible of tuberculous etiology. Skin biopsy of lesion was performed by him and sent to us for histopathological study. We received skin biopsy measuring 0.8 x 0.3 x 0.3 cm. Microscopically skin biopsy from lesion showed sheets of macrophages admixed with lymphocytes, plasma cells, and neutrophils in the dermis. Some of these macrophages showed round intracytoplasmic, basophilic bodies (Michaelis–Guttmann bodies-MG bodies), which were PAS positive (Figure 1, Figure 2). Ziehl- Neelson staining did not reveal any acid fast organisms. Serology for HIV antibodies I and II, VDRL, and hepatitis B was negative. Hence, we reported it as cutaneous malakoplakia involving perianal skin. 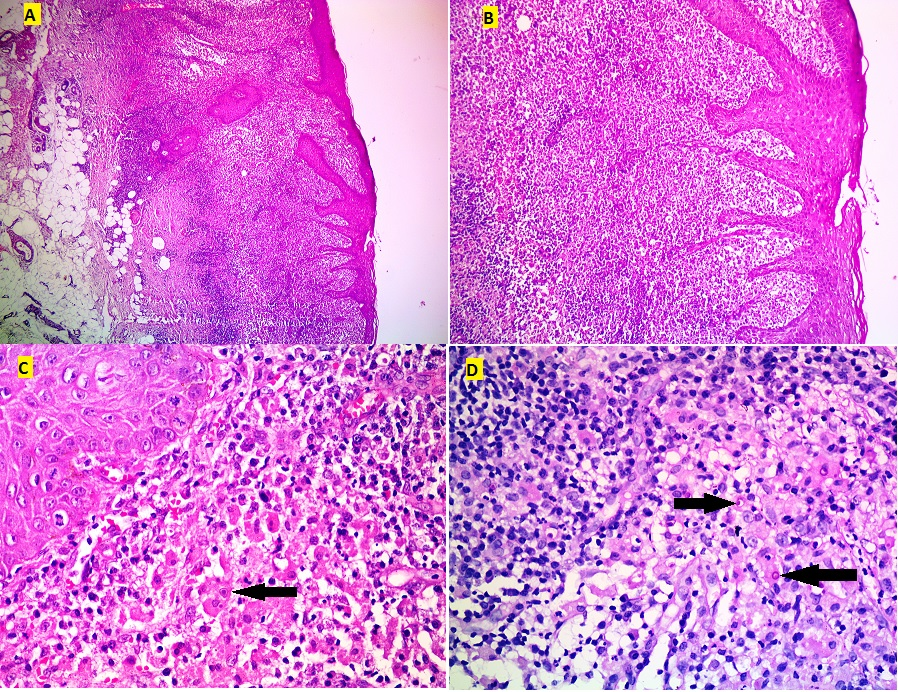 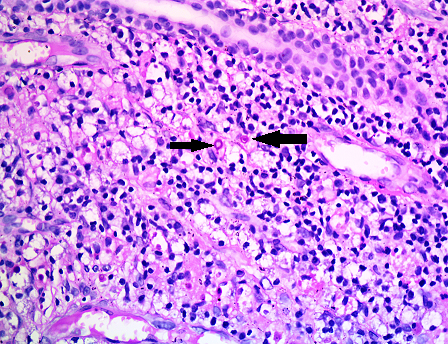 Malakoplakia is a rare acquired chronic inflammatory disorder first described in the urinary bladder by Michaelis Gutmann in1902 and named by Von Hansemann.1, 2, 4, 5

Cutaneous malakoplakia is a rarer entity that has predilection for the perianal and genital regions.1, 6

The pathogenesis of malakoplakia is not fully understood, it is thought to represent acquired bactericidal defect of macrophages associated with infection, immunosupression and or autoimmune processs. The possible hypothesis is in vitro defective bactericidal activity (process of endocytosis and intracellular bacterial digestion). It is associated with deficiency of beta glucuronidase and low cyclic guanosine monophosphate (cGMP) level interfering with microtubule formation and lysosomal activity leading incomplete elimination of bacteria undergoing calcification and iron deposition to produce Michaelis Gutmann bodies.1, 2, 5 The defective bactericidal activity have been reported to various bacteria like, Escherrichia coli, Proteus, Klebsiella (in 90% cases) and Staphylococcus aureus, Myobacterium, Pseudomonas, Rhodoccocus and Salmonella.1, 2, 5 Our patient was immunocompetent and had associated inflammation suggestive of possible bacterial etiology.

Although skin lesions are not typical they vary from papules, plaques, nodules, abscesses with or without fluctuation, fistulas, ulcers to cystic and polypoidal masses. The most common presentation is nodules or mass (45%) followed by abscess and ulceration (18-23%) Therefore, the diagnosis is confirmed by histopathology and culture studies.3, 1 The current case too presented with multiple tender papules and was diagnosed only after doing histopatological examination.

The differential diagnosis of cutaneous malakoplakia includes other infectious, neoplastic,and reactive and reparative processes. These include tuberculosis, whipple disease, lepromatous leprosy, fungus (Cryptococcus) and parasites (leishmaniasis). Special stains for microorganisms and consideration for tissue culture is must.1, 3, 7, 8 Reactive and neoplastic processes like fibrous histiocytoma, lymphoma, granular cell tumor, xanthoma, foreign body granuloma and sarcoidosis should also be considered as differential while reporting malakoplakia.1

Treatment of malakoplakia depends on the extent of disease and underlying condition of the patients. Combined surgical excision and prolonged antibiotic course is curative.

Culture specific antibiotics are specific but quinolones appear to be the best choice of drugs, Ciprofloxacin being the most effective. Discontinuation of immunosuppressive drugs also required.2, 5 Surgery followed by antibiotic treatment results in cure with no recurrence to date.

On extensive search of literature, we could retrieve only 7 cases of cutaneous malakoplakia of perianal skin in the English literature with just 2 cases from India.2, 3, 5, 9

We are presenting this case for its rarity especially at an unusual site like perianal skin and its occurrence in an immunocompetent individual. Awareness about this entity will help in a pinpoint diagnosis with just histopathology examination and special stains. Surgery coupled with antibiotic treatment results in a permanent cure.