Metaplastic carcinoma of breast is rare variant of breast carcinoma with varying histology and a generally poor prognosis depending on the histological subtype in addition to classical prognostic factors. It’s triple negative status further compounds the poor clinical behaviour of these carcinomas. While the pathogenesis is unknown, various theories have been proposed. A predilection for late distant metastases warrants a close follow up of these patients.

We report a case of a 43-year-old lady who presented with a breast lump and on histopathology, metaplastic carcinoma breast (Ductal carcinoma with matrix producing mesenchymal tumor) was diagnosed. With no definite consensus on treatment protocols, awareness of this histological entity and the accurate diagnosis of the same is important.

Metaplastic breast carcinoma is a rare variant of breast carcinoma with uncertain prognostic significance. Cases reported from Asian countries have also been relatively lesser when compared to the West.1 The pathological classification and formulating the differential diagnoses are challenging due to the diverse histological patterns, relative rarity of diagnosis and the general lack of consensus on an appropriate classification for these tumors.2

While the actual pathogenesis is not known, various theories exist . Origin from cancer stem cells or myoepithelial cells or it’s progenitors,3 epithelial to mesenchymal transition (EMT) of the carcinomatous to sarcomatous component4 and a role of microRNAs in the evolution have been suggested.5 The frequent presentation as a well demarcated tumor leads to similarities with certain variants of ductal carcinoma as well as benign lesions on mammography.6 The differentiation of neoplastic epithelium into epithelial or mesenchymal elements like spindle cells, squamous cells, bone or cartilage is it’s characteristic feature, with a poor prognosis in adherence to it’s triple negative status.7 Current classification of metaplastic carcinoma breast includes six subtypes: low grade adenosquamous carcinoma, fibromatosis like metaplastic carcinoma, squamous cell carcinoma, spindle cell carcinoma, metaplastic carcinoma with heterologous mesenchymal differentiation and mixed metaplastic carcinoma. The prognosis, besides the grading and staging, also depends on the histologic subtype, with a relatively indolent behaviour being exhibited by the fibromatosis like variant and low grade adenosquamous carcinoma, highlighting the importance of a thorough histopathological examination.8

A large tumor size and rapid growth with a high potential for metastases to the lung and bone primarily by means of vasculature are characteristic features. However, while a lower rate of axillary nodal metastases when compared to invasive ductal carcinoma has been observed, late distant metastases have been observed in cases without lymph nodal involvement.(24) Similar to other triple negative carcinomas, a poor response is documented to hormonal and chemotherapy, and presently neoadjuvant radiation therapy is used in combination with surgery for these patients.9

A 43-year-old lady presented to our hospital with complaints of a lump in the left breast since 2 months. There was no history of nipple discharge or swelling, swellings anywhere else in the body or weight loss.

On examination, her general examination was unremarkable. On local examination, a left breast lump of size 3x2x1cm was noted in the upper outer quadrant. It was firm, non tender and appeared to be fixed to the underlying structures. The nipple areola complex and rest of the overlying skin was unremarkable. No axillary lymphadenopathy was grossly discernible. The opposite breast and rest of the systems were within normal limits.

Radiological imaging was suggestive of a left breast lump with left axillary lymph nodes. Imaging of rest of the body was unremarkable.

She underwent a lumpectomy along with axillary nodal dissection and the specimen was sent to us at the histopathology department.

On gross examination, a fibrofatty lump of size 9.0x7.5x4.6cm was received which on cut surface revealed a grey white solid growth measuring 4.0x2.8x2.0cm. The distance of the growth from skin was 0.6cm and from the deep resection margin was 1.5cm.

A histopathological diagnosis of Metaplastic carcinoma breast (Ductal carcinoma with matrix producing mesenchymal tumor) was made.

On immunohistochemistry, the tumor revealed negativity for ER, PR and Her-2/neu markers. 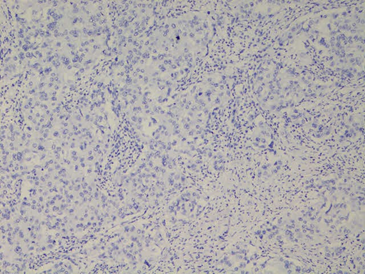 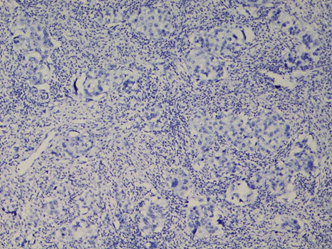 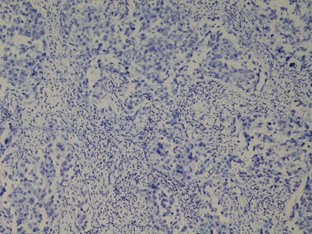 Metaplastic breast carcinomas are usually high grade tumours that present with a large mass, most of them arising denovo, but there are few reported cases that arose from preexisting lesions like papillomas, complex sclerosing lesions and nipple adenomas.1, 10 Prognosis of metaplastic breast carcinomas is worse when compared with high grade invasive ductal carcinoma and they rarely benefit from hormonal therapy and conventional chemotherapy.11, 12

The median age of presentation ranges from 48 to 59 years as per literature.13, 14 It mostly presents as a rapidly growing mass i.e larger than typical breast cancers, usually greater than 2 cm. Fixation to underlying deep tissues or skin can be present.15 Patient commonly presents with painful lump in breast while nipple discharge, nipple retraction or skin ulceration is extremely rare.16 The lung is the most common site of visceral metastasis followed by brain, bone and liver.17 Axillary lymph node involvement is seen in about 8-40% of cases which is comparatively much lesser than that seen in standard invasive breast cancer.18

Different molecular subtypes of breast cancer based on gene expression microarrays are luminal, basal like, normal breast like and HER2 positive. These subtypes are associated with differences in risk factors, biological behaviour, clinical outcome, histologic grades and response to therapy. Therefore, it is necessary to classify breast cancer into these groups during the routine surgical pathology workup. Pathological classification of metaplastic breast carcinoma and its differential diagnosis is challenging because of diversity of histological patterns and rarity of the diagnosis.19

Metaplastic breast cancer has an aggressive clinical course and distinct histologic designations. It was not officially recognized as a separate histologic entity until 2000. This category of breast tumours encompasses tumours in which adenocarcinoma is found to coexist with admixture of spindle cell, squamous, chondroid or bone forming neoplastic cells. They are estrogen receptor(ER), progesterone receptor (PR) and Her2 neu negative and tend to have a worse prognosis than other triple negative breast cancers.20

Immunohistochemistry has a major role in definitive diagnosis of metaplastic breast carcinoma. The sarcomatous component shows positivity for cytokeratin (CK) in 55% and vimentin in 98% of cases.23 They are negative for estrogen, progesterone, HER2 neu (unlike ductal and lobular carcinoma) and show overexpression of epidermal growth factor receptor gene (EGFR/HER1).24 Like stem cells, tumour cells show positivity for CD44 and negativity for CD24.4 The minimal expression of GATA3 regulated genes make these tumours relatively chemoresistant.

There is no standard treatment protocol till now.However, surgery with sentinel lymph node biopsy or axillary lymph node dissection followed by postoperative chemotherapy and radiation therapy in various combinations can be used as per different studies.25 Traditional hormonal therapy has no role in treatment while adriamycin and taxane based chemotherapy has some response.

We hereby reported a case of metaplastic carcinoma breast in a 43-year-old lady which revealed triple negativity on immunohistochemistry.

Further research on the pathogenesis and reports highlighting the pathological features and follow up may provide clues to the best management of these cases in future.

A Luini M Aguilar G Gatti R Fasani E Botteri JAD Brito Metaplastic carcinoma of the breast, an unusual disease with worse prognosis: the experience of the European Institute of Oncology and review of the literatureBreast Cancer Res Treat200710133495310.1007/s10549-006-9301-1