Granular cell tumor (GCT) is a benign soft tissue neoplasm generally believed to be of nerve sheath origin. It is most frequently seen in skin, subcutaneous tissue and oral cavity. GCTs are uncommon in gastrointestinal tract (GIT), in which the majority are located in the esophagus. In this article, we report a case of GCT involving cecum in a 22 years lady. She had a sessile polyp in the cecum which was thought to be NET. Typical histomorphology and expression of S-100 on immunohistochemistry confirmed the diagnosis.

Key Messages: Colonic GCTs are extremely uncommon. This is just the third case of GCT of colon in Indian literature. GCTs pose a diagnostic challenge due to lack of symptoms or nonspecific symptoms. Awareness of this entity helps in preventing misdiagnosis as happened in this case and avoiding further unnecessary treatment.

Granular cell tumors (GCT) are relatively uncommon and generally benign. They are most often seen in the skin, subcutaneous tissue and oral cavity. Gastrointestinal tract (GIT) involvement is uncommon, in which the most common site is esophagus followed by the large intestine.1 Colonic GCTs are often asymptomatic and may be detected incidentally during colonoscopy done for screening or for non-specific gastrointestinal symptoms.2

A 22 year-old lady visited the gastroenterology clinic with vague symptoms of abdominal discomfort of 6 months duration. Her laboratory investigations were unremarkable except for mild iron deficiency anaemia. Her colonoscopy showed a small pale tan sessile polyp in the cecum measuring 0.5 x 0.5 cm. The overlying mucosa was normal. The polyp was endoscopically resected with a clinical diagnosis of neuroendocrine tumor (NET). Histopathology was done in outside laboratory where it was labelled as Oncocytic variant of NET. She was referred to our institute for further workup and management. On review of histology sections, the cecum showed a polypoid mass with intact mucosa. The lamina propria showed clusters of large cells with abundant eosinophilic granular cytoplasm and small round to oval central nuclei (Figure 1 A,B,C). There was no nuclear atypia or necrosis. The cytoplasmic granules were positive for periodic acid Schiff (PAS) and were diastase resistant (Figure 1 D). Morphological features favoured the diagnosis of GCT. Considering a very rare site for GCT and outside diagnosis of Oncocytic variant of NET, we did Immunohistochemistry (IHC). On IHC, the tumour cells showed a strong, diffuse cytoplasmic and nuclear expression of S-100. Cytokeratin (AE1/AE3), Synaptophysin and chromogranin were negative confirming the diagnosis of GCT (Figure 2). Due to benign nature of GCT, the patient was not advised any further treatment. She is on regular follow up and is symptom free for 6 months after excision of the tumour.

H&E microphotographs showing A and B: clusters of granular cells in the lamina propria of the cecum. (Ax40,Bx100); C: These cells have abundant granular eosinophilic cytoplasm and central round nucleus. (x400); D: These granules are PAS positive.(PAS stain x400) 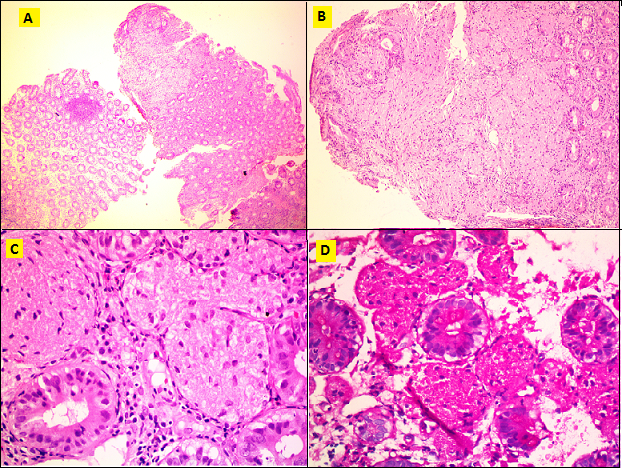 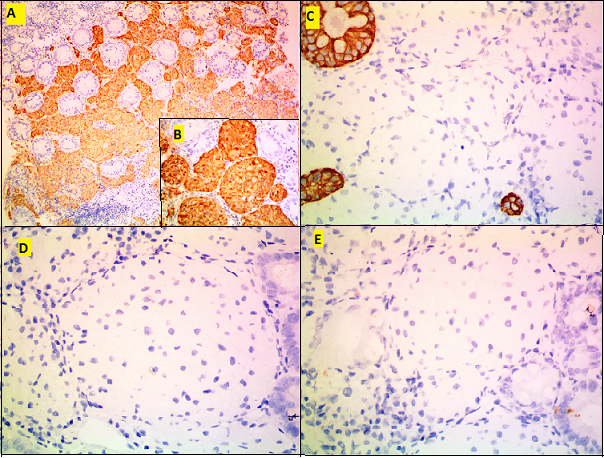 Granular cell tumor (GCT) is a rare benign neoplasm also known as Abrikossoff’s tumor.3 It can arise in virtually any organ, but is most often seen in the oral cavity, skin and subcutaneous tissue.1 GCTs are relatively uncommon in the GIT, accounting for 5-11% of all GCTs.2 In GIT, the most common site is esophagus followed by the colon.1 Approximately, 20% of all the gastrointestinal GCTs are located in the colorectal region.4 To date, about 130 cases have been reported in English literature.2 In the colon, Right side – Ascending colon and Cecum is primarily favoured location.2 On extensive search, only 22 cases of GCT of cecum have been reported in the English literature,1, 2, 3, 4, 5, 6, 7, 8, 9, 10 including just 2 cases from Indian literature.3, 5

Although, there is lot of speculation and controversy regarding its histogenesis, the recent immunohistochemical and electron microscopic studies suggest derivation from Schwann cells of the peripheral nerve.3 GCT affects persons of varying ages with a peak incidence in the 4th to 6th decades of life, with a slight female predominance with a female to male ratio of 2:1.3 Our patient was relatively young in her third decade. Mutaz et al. have reported GCT in a 10 years young girl.8

Most of the GCTs involving GIT present as asymptomatic, solitary, submucosal nodule.3 They are found incidentally on routine colonoscopic screening or during evaluation for nonspecific gastrointestinal symptoms as in our case. A few cases presented with hematochezia as a chief complaint.1 Endoscopically, GCTs appear as solitary, small sessile polyp ranging from a few millimetres to 2 cm. Multiple lesions within colon and the remaining GIT occur in 4% to 16% of patients.1 Our case presented as a sessile submucosal polyp measuring 0.5 cm in diameter and was clinically thought to be NET.

The gold standard for the diagnosis is the typical histological findings: nests and clusters of epithelioid or spindle cells, with a small round nucleus and abundant eosinophilic granular cytoplasm.4 The granules are periodic acid Schiff (PAS) – positive and diastase – resistant. On IHC, the neural markers, S-100 and neuron-specific enolase (NSE) are diffusely positive. Other positive markers reported in GCTS include inhibin, calretinin, and nestin.1 In our case, the initial diagnosis made by the referring pathologist was Oncocytic variant of NET. However, typical morphology, expression of S-100 and negative neuroendocrine markers ruled out NET and confirmed GCT. Other close differential diagnoses include mucosal Schwann cell hamartomas and benign epithelioid peripheral nerve sheath tumors –Schwannomas. Both these tumours express S-100 but they lack granular cytoplasm.1

Most GCTS are benign and only less than 2% can follow a malignant course. The characteristic features that have been proposed to predict malignant potential are tumour necrosis, tumor cell spindling, pleomorphism, high nuclear to cytoplasmic ratio, large nucleoli, and increased mitotic activity. If malignancy is found, this has a high propensity for metastasis, recurrence, and poor prognosis,4

Since there are no established guidelines for the treatment of colorectal GCT, some physicians recommend performing endoscopic mucosal resection, endoscopic submucosal dissection, or polypectomy for tumors less than 2 cm. Follow-up colonoscopies are advised if multiple tumors or risk of malignancy exists.4

In conclusion, colonic GCTs are very unusual and pose a diagnostic challenge due to lack of symptoms or nonspecific symptoms. Awareness of this entity helps in preventing misdiagnosis as happened in this case and avoids further unnecessary treatment.