Prachi and Aiyer: Not always a distant metastasis: Can be a double maliganancy too

Not always a distant metastasis: Can be a double maliganancy too

The incidence of double malignancy reported are between 0.3% and 4.3%. The second primary lesion is identified either simultaneously with the primary lesion (synchronous) or after a period of time (metachronous). We report a case in a 63-year-old male presenting with double malignancy with adenocarcinoma of the ascending colon and a pre- sacral Chordoma of which the latter was detected accidentally on imaging. The patient underwent surgical excision of the pre-sacral mass and an exploratory laparotomy with Right Hemicolectomy.

The increasing incidence of multiple malignant tumors is a real challenge to both clinicians and pathologists and close attention should be paid to imaging and histologic findings to avoid a misdiagnosis. In addition an early diagnosis is essential to achieve optimal treatment. We believe that the treatment modalities should be carefully tailored for each individual patient diagnosed with a double malignancy.

The presence of a second synchronous or metachronous malignancy is not uncommon. The neoplasms are either limited to a single organ or may involve multiple organs at different anatomical sites. Multiple Primary Malignancies (MPM) were first described by Billroth in 1879.  The North American Association of Central Cancer Registries (NAACCR) classifies MPM into two categories: (1)- Synchronous, in which the second tumour occurs within 6 months of the primary tumour (The Surveillance Epidemiology and End Results Programme (SEER) definition is within two months) and (2)- Metachronous, in which the tumours follows in sequence, that is, more than six months apart.1 Metachronous malignancies are more common because of the increase in the number of elderly cancer survivors as a result of improved diagnostic and treatment modalities. However the exact pathophysiology of multiple primary tumours remains unknown.

We report a case of synchronous malignancies in a 63-year-old male diagnosed with Adenocarcinoma of the Ascending Colon and a simultaneous pre-sacral Chordoma both histologically proven.

A 63-year-old South- Asian male presented with complaints of low backache and discomfort in the sitting position since 4 months. On CECT abdomen, a lobulated enhancing mass measuring 6.7x4.3cms was seen in the pre-sacrococcygeal region causing erosion of the underlying bones. There was a short segment irregular circumferential wall thickening involving proximal ascending colon located approximately 2 cm from the caecum. On colonoscopy, the evidence of extrinsic compression of the rectum was seen along with a sigmoid colon polyp and an ascending colon growth.

Rectal EUS guided biopsy was done from the pre-sacral mass at another centre and was reported as suspicious for malignancy. Sigmoid Polypectomy was done, followed by histopathology which revealed microscopic foci suspicious for invasive adenocarcinoma in the background of adenomatous polyp with high grade dysplasia.

The biopsies done outside were reviewed and the patient was planned for Exploratory Laparotomy with Right Hemicolectomy with ileo-transverse anastomosis with Pre- Sacral tumour excision and sigmoid polypectomy was performed through midline vertical laparotomy incision and midline incision posteriorly. Post-operatively, the specimen was sent to the Department of Anatomic Pathology of our hospital. Grossly, the Right Hemicolectomy was measuring 32 cm in length with a polypoidal growth in the ascending colon. On serial sectioning the tumour was measured 6x4x3cms. The marginal excision of the pre-sacral mass measured 4.5x4x3 cm. On histopathologic examination the ascending colon showed a poorly differentiated adenocarcinoma with focal mucinous and signet cell areas, invading through the muscularis propria into the pericolorectal tissue with uninvolved lymph nodes. [Figure 1 A,B] Immunohistochemically, there was loss of expression of MLH1 and PMS2.

Patient is on regular follow up and clinically there is no evidence of recurrent disease till date. 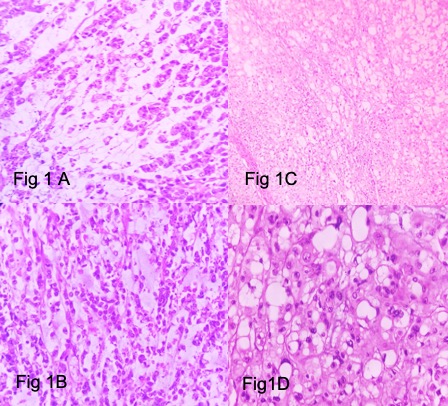 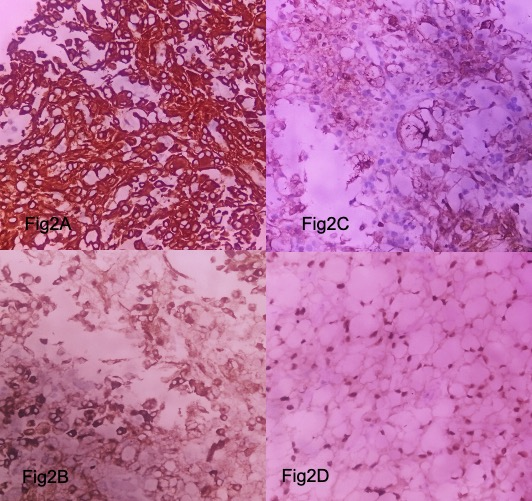 Multiple primary tumours are a well-known and common phenomenon. Rapid advancements in diagnostics and therapeutics have contributed to a significant improvement in the survival rates of cancer patients. Operable synchronous primary malignancies can be resected in a single setting with minimal morbidity and better survival and lessening the burden on patients both psychologically and financially. Data from developing countries pertaining to synchronous and metachronous primary malignancies is very limited.

Bongers et al. concluded that, in addition to external carcinogens, an intrinsic susceptibility may influence the risk for the development of second primary tumors in patients with head and neck squamous cell carcinoma.3

Mitchell reported a patient with five primary synchronous neoplasms of the gastrointestinal tract, involving the stomach, small bowel, and colon.4

It is imperative that patient with a primary malignant tumors should be thoroughly, closely, and regularly followed up. Genetic counseling, risk estimation, cancer screening and chemoprevention must be emphasized.

Possibility of a synchronous or metachronous second primary malignancy should always be considered whenever a second lesion is detected at an unusual site. Histopathological evaluation of the lesion will lead to accurate diagnosis, staging, and appropriate treatment.

Appropriate cancer prevention strategy with proper emphasis on synchronous and metachronous cancer needs to be designed and incorporated into the National Cancer Control Programme as multiple primary cancers have a unique, biological behavior requiring specific diagnostic and therapeutic intervention.

The current study emphasizes the need for a thorough and competent pre-operative biopsy evaluation in cases with multiple tumours accompanied by appropriate IHC as applicable to ensure accurate diagnosis and consequent appropriate therapeutic management.