Unusual renal tumor in an infant

Introduction: Two-month-old female presented with left loin swelling and pain. The swelling was 8cmx6cm and it was ballotable in nature. It was gradually increasing in size.

Aim of the Study: To find out the incidence of this rare, high index of suspicion, investigations including cytopathology and histopathology, early diagnosis and management.

Materials and Methods: The informed consent from the parents of the patient was taken. The study was carried out in a tertiary care hospital in Kolkata.

Conclusion: Immature teratoma is one of the rare causes of Pediatric Kidney Tumor.

Key Messages: Renal teratoma is an extremely uncommon tumor in infancy. But it is one of the differential diagnoses of renal mass in infants. Diagnosis may be suspected from radiological investigation and confirmed by histopathological examination. A good prognosis can be expected after proper management.

Renal Teratoma is very rare.1 All teratomas arise from the germ cell layer. Teratoma is a special type of tumor that contains recognizable mature and immature cells or tissues derived from one or more of the three primordial germ cell layers.2 The most common site of teratoma is the sacrococcygeal region. 40% of teratomas are found here., 25% occur in ovary followed by mediastinum, neck, brain and least common in the abdomen.3 Thirty cases of renal teratoma have been reported.4 Recently we came across an unusual renal tumor which we are describing.

A female baby aged two months weighing 2950 gm came with swelling in the left loin. The swelling was not noticed during birth. She had no other complaints other than the swelling. The loin mass was ballotable and measured (8cmx6cm). All other investigations e.g full blood count, blood sugar, urea, creatinine, serum bilirubin, urine examination were within normal limits.

The ultrasound examination of the abdomen showed a solid mass within the renal parenchyma. Contrast CT showed a solid heterogenous mass measuring (7cmx5.5cm) in the left kidney. (Figure 1) Areas of calcification were also evident. FNAC was done. It showed mature neural tissue, squamous cell, fat cell along with a few oval to spindle-shaped cells with focal atypia. The cytological diagnosis was mature teratoma. 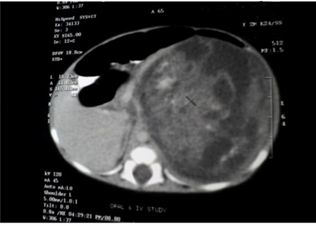 The excision of Renal mass was done. The mass measured (7.5cmx6cmx5cm). (Figure 2) Cut surface showed that it was solid and it had variegated appearance. Cartilaginous areas and brain tissue-like areas were also present. Sections from various areas were taken. Microscopically there was mature squamous epithelium with hair follicle along with hair shaft, mature cartilage, neuroepithelial tissue, immature neural tube, (Figure 3) meningothelial cells, choroid plexus, neuroblastoma, and ganglioneuroblastoma like areas benign intestinal glands, but no areas of tubule formation, glomerulus formation blastemal cell and nephrogenic rests were noted. The histological diagnosis was Immature Teratoma. The patient was given Platinum-based chemotherapy. After three months the patient again returned with pain abdomen. CT showed an enlarged hilar lymph node. The lymph node was excised immediately and sent for histopathological examination. The lymph node was 3cmx2.5cm in size. The cut surface was white and solid. Histopathological examination revealed squamous epithelium with adnexal structures, areas of neuroblastoma, ganglioneuroblastoma, and small cyst-like areas lined by columnar epithelium with effacement of lymph nodal architecture. The diagnosis of metastasis from the Primary tumor was made. Again Platinum-based chemotherapy was given. The patient is doing well to date.

Cut surface of the kidney tumor 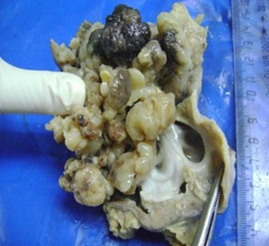 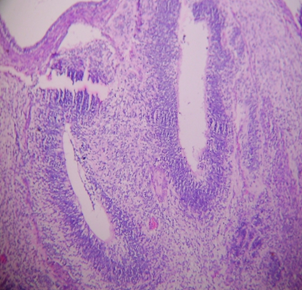 Patients with renal teratoma usually present with abdominal mass, pain abdomen, hematuria, vomiting.7 In our case, the abdominal swelling was the main complaint.

In 90% of teratoma of pediatric age group consists of components of all three germ cell layer.9

Rarely tumors are found in the retroperitoneal region, cervical region, mediastinal and intracranial region.10 But they did not report any case of Renal teratoma.

Immature tissues are seen in 20% to 40% of pediatric teratomas.11 In our case, we got immature renal tubules.

In the series of 92 cases of teratoma described by Amit V Varma et al., The commonest site was the ovary followed by the sacrococcygeal region, brain/spinal cord, mediastinum, and testis. They did not have any case of renal teratoma.12

There are several hypotheses regarding the origin of Teratoma like a) Germ cell theory b) the embryonic-cell theory; c) the unifying hypothesis; (iv) the extra-embryonic-cell theory; (v) the induced-twin hypothesis; and (vi) the fetus-in-fetus theory.13 The presence of displaced germ cells into the kidney may be suggested by the proximal location of the genital ridge to the nephrogenic anlage during embryogenesis.14 Few cases of renal teratoma were found to be associated with renal dysplasia, which may suggest that intrarenal teratoma is associated with development.

For diagnosis of renal teratoma following things must be established.

The intrarenal origin was confirmed by CT. There was no tumor in gonads and any other retroperitoneal tumor. So it was not any metastasis from gonads or any extension from any retroperitoneal tumor. There was also no evidence of Teratoid Wilm The differential diagnosis include Teratoid Wilms, Mesoblastic Nephroma, neuroblastoma. These can be differentiated by histological examination.3

Teratomas are divided into mature and immature types. Well-differentiated tissues like dermal appendages, skin, neurological tissue, and teeth are found in Mature Teratoma while immature teratoma has similar histological features as fetal and embryonic tissue containing mature epithelium and immature areas of neuroectodermal and mesenchymal tissue. Mature teratomas are, usually, benign. No case of metastasis from mature Renal Teratoma has not been reported so far. Malignant potential is more in children presenting an early age as compared to older children. 11

Renal teratoma is an extremely uncommon tumor in infancy. But it is one of the differential diagnoses of renal mass in infants. Diagnosis may be suspected from radiological investigation and confirmed by histopathological examination. A good prognosis can be expected after proper management.

A Moll A Krenauer U Bierbach H Till W Hirsch I Leuschner Mixed hepatoblastoma and teratoma of the liver in a 3-year-old child: a unique combination and clinical challengeDiagn Pathol2009413710.1186/1746-1596-4-37