Jagdale and Pol: Ectopic prostatic tissue presenting as a urinary bladder polyp in a young male

Ectopic prostatic polyps are uncommon lesions, sometimes found in the lower urinary tract, particularly the posterior urethra. Ectopic prostatic tissue in the bladder is very uncommon. Until now, only 43 cases of this lesion have been reported in the English literature. Clinically and endoscopically these lesions are often mistaken for malignancy. We report a case of ectopic prostatic tissue at the bladder neck in a young male. Histopathology and immunohistochemistry confirmed the prostatic nature of the tissue. Since the entity is benign and unlikely to recur, we emphasize that urologists and pathologists need to be familiar with this to avoid misdiagnosis and unnecessary overtreatment.

The finding of ectopic tissue is an unusual and interesting phenomenon in surgical pathology. Ectopic prostatic tissue (EPT) in the male urethra has frequently been described in the literature. On the contrary, EPT of urinary bladder (UB) is very uncommon.1 Till date only 43 cases have been reported in the English literature.2, 3, 4, 5, 6 These lesions mainly arise at the trigone and bladder neck.2 EPT may be associated with cystitis cystica glandularis (CCG) and simulate a neoplastic process at the clinically and endoscopically.1 We report a case of EPT presenting as a polypoidal mass at the bladder neck in a young male.

A 23-year gentleman presented with history of chronic abdominal pain since one year. On investigation, he was found to have an incidentally detected mass at the bladder neck and hence was referred to our hospital. He had no associated urinary symptoms. His clinical examination was unremarkable and laboratory investigations were within normal limits. USG and CT Scan abdomen and pelvis revealed a space occupying lesion in the bladder neck, upper tracts were normal. Cystoscopy showed normal urethra, slightly congested prostatic urethra and a polypoid lesion at the neck of the UB (Figure 1). Rest of the bladder mucosa and ureteric orifices were normal. The lesion was completely transurethrally resected and sent for histopathological examination. Microscopy showed a polypoid mass with villiform excrescences lined partly by urothelium and prostatic-type glandular epithelium. The fibrovascular core showed numerous prostatic glands lined by double layered epithelium with bland nuclei and eosinophilic frothy cytoplasm. Some of the glands showed papillary infoldings and a few had intraluminal eosinophilic secretions and corpora amylacae. The stroma was fibrous, devoid of inflammation (Figure 2, Figure 3). Based on histology, a diagnosis of ectopic prostatic tissue in the UB was made. Immunohistochemistry (IHC) confirmed the histological diagnosis. CK7 highlighted the urothelium and Prostate Specific Antigen (PSA) was strongly expressed in the prostatic glands. 34beta E12 delineated the basal cells and CD10 highlighted the basal and secretory cells, thus confirming an EPT in the UB (Figure 4).

Cystoscopy images showing a: a polypoidal mass in the bladder - before transurethral resection; b: after resection 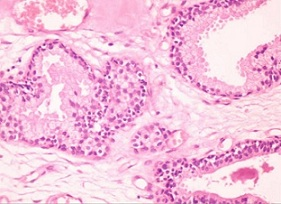 The term ectopic prostate has been applied to the lesions arising distant from the prostate, although this term is also been used to small foci of prostatic tissue in the region of the bladder neck and the seminal vesicles.7 EPT or prostate-type polyps are unusual benign lesions found in the lower urinary tract, particularly on the posterior urethra and are seldom found in the UB.2 English literature search reported only 43 cases till date.2, 3, 4, 5, 6 Zhu et al. have reviewed 39 cases (including their case) reported till 2018.2 The four other case reports not included in the above study are of Trivedi et al.,3 Rodolfo et al.,4 Un S et al.5 and Adhya et al.6 The other notable contributions were by Chan et al.8 (reviewed 17 cases till 1987) and Ritcher et al. (reviewed 29 cases till 1991).9

On reviewing all documented 43 cases, majority occurred in adult males after 4th decade, with just one case in 2nd decade and 4 cases in the 3rd decade. The age ranged from 15-79 years. 2, 3, 4, 5, 6 Our case was a 23-year young male. Trigone (53.5%) and bladder neck (13.9%) were the commonest sites. The other sites were body, lateral wall, bladder dome, ureteral orifice, anterior wall and inter-ureteric ridge. Most common presentation was hematuria (58.1%) and dysuria (20.9%). Other symptoms included urinary frequency, urgency and recurrent urinary tract infection. Interestingly, 7 cases were asymptomatic and ours too was incidentally detected during work up for abdominal pain. Imaging and cystoscopy were commonly used for detection, the lesion presented as an iso-echoic mass on ultrasound.2 Endoscopically, EPT may be confused with malignancy. However, the former is usually firm, smooth and dome shaped with a broad base and normal overlying mucosa, which is absent in an urothelial neoplastic process. Furthermore in EPT, a papillary like appearance of the surface is a very unusual event. Obviously, benign lesions such as CCG and inverted papilloma may be ruled out with certainty only with histological examination.1

Several theories proposed to explain the histogenesis include, the migration and misplacement of normal tissue, the persistence of embryonic remnants and metaplastic changes caused by chronic inflammation. In relation to EPT, the most likely explanation seems to be that of the embryonic prostatic tissue migrated and become isolated.10 Lack of inflammation in the subepithelial tissue or metaplastic process in our case favor the migration theory.

Histologically, two types of lesions were observed, the polypoid located in various sites of the bladder wall and the flat lesions in the bladder neck. Both lesions shared in common a prostatic-type and transitional epithelium while prostatic-type glands were prominent in the polypoid lesion.7 Typical acinar and papillary arrangement, double layered epithelium and presence of luminal eosinophilic secretions or corpora amylacae are the clues to the diagnosis and recognizing as benign. PSA and Prostatic Acid Phosphatase (PAP) help to confirm EPT and rule out other benign glandular mimics in UB like CCG, nephrogenic adenoma and inverted urothelial papilloma.

EPT is a potential site of hyperplastic and malignant changes. Two cases of adenocarcinoma arising in EPT in bladder have been reported.6, 10 When prostatic adenocarcinoma is suspected to arise in the EPT, IHC staining for p63 or basal cell specific cytokeratin antibody 34betaE12 is used for the detection of basal cells. Over-expression of alpha-methylacyl CoA-racemase is also useful in the diagnosis of adenocarcinoma.10 Our case expressed PSA in the prostatic secretory cells and 34betaE12 in the basal cells confirming the benign nature of the ectopic prostatic glands.

Endoscopic transurethral resection is the most commonly used treatment option.2 The prognosis of EPT is excellent as they are benign and do not recur if completely removed.10 Extensive review documented recurrence in only one case2 and adenocarcinoma in two cases, arising in EPT in the bladder.6, 10

EPT should be included in the differential diagnosis of polypoid lesions of the UB. Recognition of eosinophilic frothy cytoplasm in the secretory cells with corpora amylacae is the key feature in distinction from other benign urothelial lesions.