Introduction: Hydatid cyst is a parasitic infestation caused by Echinococcus granulosus. The spleen being rarely involved by the parasite, commonly involved organs are liver followed by lungs. It constitutes only 4% of abdominal hydatid diseases. Its worldwide incidence is 0.5 to 4%. In this case report, we present a case of young boy with concomitant splenic and liver hydatid cysts.

Case Report: A 8-year-old boy, resident of Chamba district was presented with abdominal pain, fever and left upper quadrant swelling. The swelling had started enlarging over past 4 months. After necessary investigations it was diagnosed as hydatid cyst of spleen concomitant with liver and was confirmed by histopathological examination of the cyst membrane. All routine investigations other than anemia of 9.4 mg/dl and raised Ecchinococcus IGG serum levels, all other tests were within normal range.

Discussion: Splenic hydatid is a rare entity and among abdominal presentations of hydatid diseases its incidence is very low, being 4% only. Diagnosis can be made on CECT abdomen along with the Echinococcus IGG serum levels, cytology of aspirated cystic fluid and then can be confirmed on histopathological examination of the cyst membrane sent for the histopathological examination.

Conclusion: This case report emphasizes the need of considering hydatid cyst as a differential with uncommon presentation of the disease even in non- endemic area, as in this case patient presented with splenomegaly and abdominal pain.

Hydatid cyst is a parasitic infestation caused by Echinococcus granulosus. Dogs and related species are the definite host, sheep, goats and swine are intermediated host while humans get infection via fecal-oral route when the eggs excreted by the dogs or other hosts are ingested incidentally. The most common site of the disease is liver followed by lungs. Splenic hydatid cyst is a rare entity constituting only 4% of abdominal hydatid diseases.1 Its worldwide incidence is 0.5 to 4%2 and associated lung and liver involvement occurs in 20 to 30% cases.3, 4 The rarity of splenic hydatid cyst may pose a diagnostic challenge to the clinicians. In this case report, we present the case of a young boy from non-endemic area with concomitant splenic and liver hydatid cyst.

A 8-year-old boy resident of Chamba district was presented with abdominal pain, fever and left upper quadrant swelling. The swelling had started enlarging over past 4 months. All necessary routine investigations were carried out. All the investigations were within normal range except for hemoglobin of 9.4 mg/dl and raised ecchinococcus IGG serum levels. The CECT abdomen findings show calcified cyst in segments IV b and VI of liver measuring (24.7 x26.7) mm and (18.4x18.6) mm along with the splenic hydatid cyst measuring (6.4x7.7x6) cm with surrounding rim of fluid suggestive of pericyst fluid rupture with thin overlying parenchyma and splenomegaly. It was treated with enucleation of hydatid cyst with omentopexy with drainage of residual cavity and the diagnosis was confirmed on histopathological examination of cyst membrane. Pearly white cyst membrane was received in the department of pathology. Gross picture is shown in Figure 1 and microscopic examination showed endocyst with scolices as in Figure 3. A separate soft tissue was also received which on microscopy revealed pericyst as shown in Figure 2. 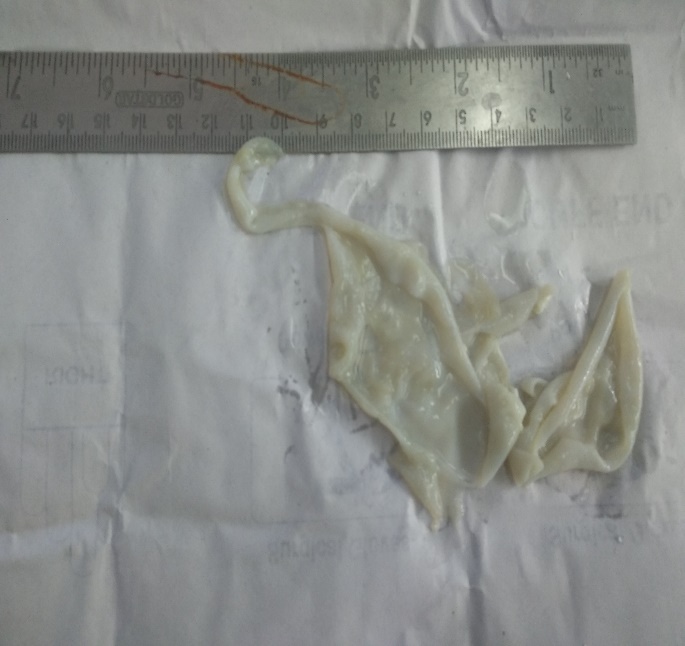 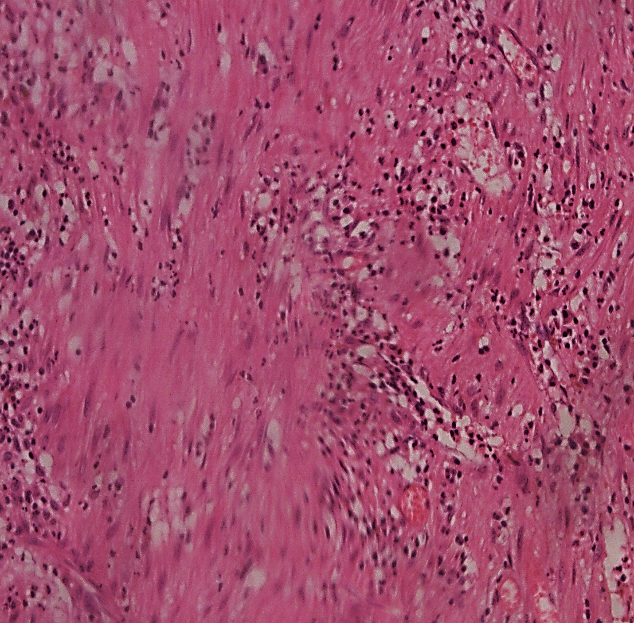 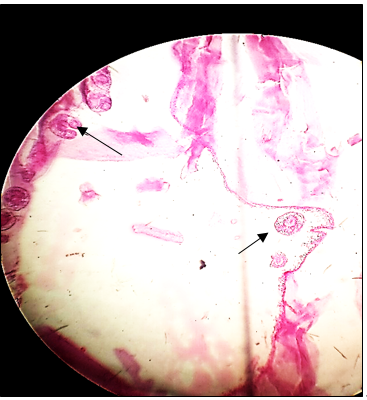 Splenic hydatid cyst is caused by Ecchinoccocus granulosus. It is generally seen in endemic area but should be considered as a differential diagnosis for the cases presenting with splenomegaly even from non-endemic areas. It is asymptomatic till it reaches to advanced size and patient presents with left upper quadrant pain and mass. At times it can present with vague symptoms of fever, burning micturition and vomiting with no splenomegaly.5 Hydatid cyst is common in liver and lungs and can affect other organs like spleen concominant with the lung and liver as in our case but isolated cases of splenic hydatid cyst are also recorded.6 The imaging and histopathological findings of splenic hydatid cyst are similar to those of hydatid cyst of liver or lungs. Hydatid cyst consist of three layers. The outermost is pericyst made up of fibrous tissue, middle layer is ectocyst which is laminated, hyaline and acellular membrane and the innermost layer is endocyst which is the germinating layer consisting of daughter cyst and brood capsule with scolices and which secretes the hydatid fluid internally and the laminated membrane externally producing new generations of parasites. The possible route of splenic hydatid cyst is arterial route through liver. The concomitant cases involving liver with spleen may be seen in 20-30% cases.3, 4 The differential diagnosis of hydatid cyst includes epidermoid cyst, pseudocyst, splenic abscesses, hematoma and cystic neoplasm.7 The standard treatment is total or partial splenectomy but in our case patient was treated with enucleation of cyst and omentopexy with drainage of residual cavity.

In our case report the patient was a young boy of 8 years residing in a non- endemic area. The patient was presented with fever, abdominal pain and left upper quadrant mass enlarging over past 4 months. This case report is to emphasize the need of considering hydatid cyst as a differential diagnosis of abdominal pain with splenomegaly in endemic as well as non- endemic regions as it needs the treatment before the wall ruptures and patient presents with the shock and anaphylactic reactions towards the fluid.