Background: Pancytopaenia involves reduction in all the three haematological cell lines leading to the clinical manifestations related to anaemia, leucopaenia and thrombocytopaenia. These features can manifest either alone or in different combinations. Treatment depends on the accurate diagnosis for which pathological investigations are mandatory.

Aims and Objectives: The study was conducted with the aims and objectives of evaluating the different clinical and haematological parameters in cases presenting with pancytopaenia. Further, the cases were further divided based on their aetiology.

Materials and Methods: A total of 64 cases were included in the present study. Detailed clinical, peripheral blood and bone marrow findings were studied.

Results: Majority of the patients belonged to the age group of 16-25 years. There was a slight female preponderance in our study in the ratio of 1:1.06 for M:F. The commonest clinical presentation was generalised weakness in 55 (85.9%) cases, followed by dyspnoea in 35 (54.7%) and fever in 30 (46.9%) patients. Pallor was the commonest examination finding observed in 60 (93.8%) cases followed by pedal edema in 19 (29.7%) patients. Among RBC morphology, normocytic normochromic picture was the commonest 18(28.1%), while bone marrow finding of erythroid hyperplasia with megaloblastic maturation was observed in 20 (31.2%) patients. Overall, megaloblastic anaemia was observed in 24 (37.5%) patients.

Conclusion: Pancytopaenia is an important haematological manifestation in routine clinical practice. Timely, early and accurate diagnosis can save many morbidity and mortalities.

Pancytopenia is an important clinico-hematological entity encountered in regular clinical practice. The condition is defined as simultaneous presence of anemia (Hb< 13.5 g/dL in males or 12 g/dL in females), leucopenia (WBC<4000/µL) and thrombocytopenia (Platelets<140000/µL) resulting in reduction of all the three formed elements of blood below the normal reference range.1 It is thus, not a disease in itself but a triad of findings resulting from a number of other underlying disease entities that primarily or secondarily affect the bone marrow.2

Various hematological and non-hematological disorders may directly and indirectly affect the bone marrow either primarily or secondarily manifesting as pancytopenia in the peripheral blood.3 The incidence of various hematological disorders resulting in pancytopenia vary according to the geographical distribution and genetic predisposition. The pattern of diseases is also variable in different population groups owing to a difference in their nutritional status and the prevalence of infective disorders in that region.4, 5

Diagnostic clues obtained from haemogram and bone marrow examination are useful in the early and timely diagnosis of diseases that lead to a better prognosis in most of the cases. In view of the wide spectrum of aetiologies, cause of pancytopenia pose a great diagnostic challenge for the hematologists as well as the treating physician.

Bone marrow examination including aspiration, trephine biopsy, and other specific biochemical and haematological investigations form an essential tool in the cause leading to pancytopenia.

The present study was carried out with the aim of observing the disease spectrum in this region resulting in pancytopenia based on the clinico-hematological and/or bone marrow studies.

This study was conducted in the Department of Pathology of Varun Arjun Medical College and associated hospitals, Banthra in the district of Shahjahanpur of Uttar Pradesh. It was a hospital based observational study of one year duration (November 2019 to October 2020). All clinically and hematologically diagnosed cases of pancytopenia and who fulfilled the standard hematological criteria such as –Hemoglobin levels in males  <13.5 mg/dl and infemales 12mg/dl, Total leukocyte count<4000/µL and, Platelet count of < 140000/µL formed the study population. The total number of cases recorded were 64. All age groups starting from 16 years and above of either gender were included. A detailed relevant clinical history and clinical examination was carried out in all the cases. Patients who did not give consent, patients on chemotherapy, patients presenting with pancytopenia, but who did not fulfill the above hematological criteria were excluded from the study.

The important hematological investigations included for arriving at the diagnosis were complete blood count with special emphasis on hemoglobin, mean corpuscular volume (MCV), total and differential leukocyte count, platelet count and, bone marrow examination (aspiration and trephine biopsy). Special stains in the bone marrow aspirate and biopsy were done as and when required. Additional investigations for specific clinical conditions including Vitamin B12 and folic acid for megaloblastic anemia, malaria card test, blood culture for sepsis, liver and kidney function assays to point out etiology confining to these organ, flow cytometry, HPLC were also carried out.

Statistical data of age, sex, presenting complaints, various causes of pancytopenia, peripheral smear and bone marrow aspiration smears were studied, and compared with those published in the literature. In our study of the total of 64 cases, 31 were males and 33 were females. There was a female preponderance with male to female ratio of 1:1.06.

The clinical manifestations were also variable. 60 of the 64 (93.8%) patients presented with pallor on clinical examination. Paedal oedema was observed in 19 (29.7%) of the patients. The different manifestations have been illustrated in Table 1.

35.9% (23 cases) patients had severe and mild anaemia each. Majority of the study cases had mild category of leucopaenia. Thrombocytopaenia was also mild type in most of the patients (Table 2). The distribution of the type of RBC morphology is indicated in Table 3 alongwith the bone marrow observations. Many diseases were confirmed using special tests or other diagnostic modalities such as malarial card test, serum Vitamin B12 or folate assays, serum Iron profile etc. The distribution of all the cases as per the age group and the diagnosis is represented in Table 4; Figure 1. 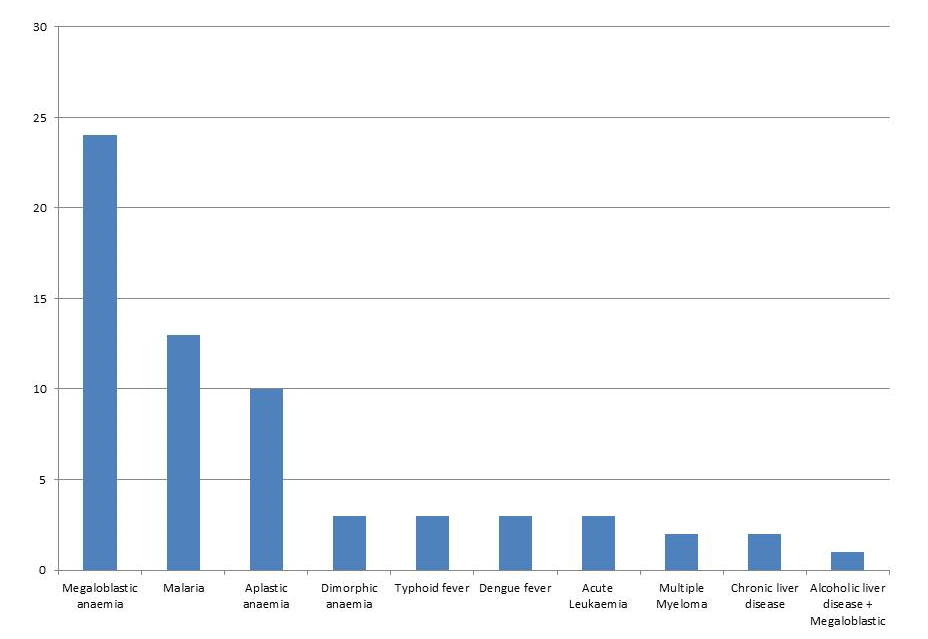 Megaloblastic anaemia is a common finding resulting in pancytopaenia in 24 cases (37.5%). It is also important to note that the young population is much more affected than the elderly. Multiple myeloma remains the disease of the elderly as observed in both our patients (Table 4). It is interesting to note that alcoholic liver disease is associated with megaloblastic picture as observed in one of our case. Malaria constitute an important cause of pancytopaenia.

Distribution of patients based on age, sex and manifestations

Distribution of patients based on the hematology parameters

Distribution of cases based on RBC morphology and bone marrow findings

Showing distribution of cases based on age group and diagnosis

Pancytopenia is a common haematological problem encountered in clinical practice and should be suspected on clinical grounds when a patients presents with unexplained anemia, prolonged fever and tendency to bleed. In India especially in this region, the causes of pancytopenia are not well defined, so the present study was undertaken to evaluate the various causes and to correlate the peripheral blood findings with those of bone marrow findings. Manifestations of anaemia such as weakness, malaise, dyspnoea on exertion or even on rest alongwith palpitation were important observations. Besides, other findings observed included petechial rashes, bruising, bleeding gums and, increased susceptibility to infections depending on the predominant cell lines that were deficient.4, 5

Heredity, medication or exposure to environmental contaminants including radiation, or poisoning by arsenic etc. can be causes of pancytopenia. Nearly 50% of the cases are idiopathic, where the exact cause leading to pancytopenia remains undetected.6, 7, 8, 9, 10, 11

Pancytopenia is not a disease entity but rather a triad of findings that may result from a number of disease process. Patients with pancytopenia show a wide variety of clinical features. Early diagnosis of different causes of pancytopenia is very crucial and requires prompt clinical examination and investigations such as complete blood count, peripheral smear and bone marrow examination. Bone marrow cellularity and composition in pancytopenia differs in relationship to the underlying pathologic conditions. The marrow is usually hypocellular in majority of the cases of pancytopenia caused due to a primary production defect.12, 13, 14, 15 Cytopenias resulting from ineffective hematopoiesis, increased peripheral utilization or destruction of cells, and bone marrow invasive processes are usually associated with a normocellular or hypercellular marrow.

Megaloblastic anemia is considered to be a major cause of pancytopenia resulting due to malnutrition in the general population especially in India.13, 16 Hypersplenism results in peripheral pooling and destruction of blood cells in the enlarged spleen resulting in their destruction and therefore pancytopenia. Causes of hypersplenism include congestive spleenomegaly due to cirrhosis or congestive heart failure, malaria, leishmaniasis, thalassaemia or Hodgkin’s lymphoma.17, 18 In HIV, pancytopenia usually occurs in advanced stages is probably due to high viral load, use of antiretroviral therapy and onset of opportunistic infections. Viral hepatitis results in transient pancytopenia and is associated with aplasia of the bone marrow. Sepsis and enteric fever have been associated with pancytopenia secondary to suppression of the bone marrow. Acquired chronic haemolytic anemia is characterized by persistent intravascular hemolysis with recurrent exacerbation due to activation of complement C.19 Paroxysmal nocturnal hemoglobinuriais a rare disorder of defective hematopoietic stem cells. The RBCs thus formed are extremely susceptible to premature destruction by the complement system. Acute leukemias may indicate bone marrow failure. Haematological abnormalities secondary to peripheral destruction of cells are commonly seen in SLE. Drug induced pancytopenia are usually dose dependent or immune mediated. The common drugs causing pancytopenia include -cytotoxic drugs, Chloramphenicol, NSAIDS, Sulphonamide, Phenothiazides, Thiazides, Antithyroid drugs, anti diabetic drugs, Azithioprine.8, 15, 18 Malaria is one of the most common cause of pancytopenia, accounting for nearly 30% of cases especially in falciparum type.20 Tuberculosis mostly miliary type is an important cause of pancytopaenia in India.21, 22

Previous other studies showed a male predominance.1, 6, 10, 12 Common presenting symptoms in our study were generalised weakness, dyspnoea and fever. Weakness as the commonest presentation by the patients has also been reported by other authors.1, 8, 21 Study by Khodke et al showed the common presenting symptoms as fever (40%) followed by weakness (30%) and bleeding manifestation (20%).2 9 patients (14.1%) had icterus either due to hemolysis or hepatocellular injury following malaria. An increase in the incidence of aplastic anemia could be related to environmental factors including an increased exposure to the environmental toxic chemicals. Pallor is the most common manifestation as reported in previous other studies.5, 16 In the present study the mean value of haemoglobin was 5.84 ± 1.98 g/dL. Similar observations have been reported by other researchers as well.8, 9, 21 However, few authors have reported a higher haemoglobin level.16 Severity of anaemia has also been differently reported by different authors.7

Pancytopenia due to chronic liver disease was observed in nearly 10% of cases. Osama ishtiaq et al. in their study showed that cirrhosis leading to hypersplenism accounts for 12% of cases of pancytopenia.17 Variation in the frequency of disorders causing pancytopenia has been ascribed to differences in methodology, use of stringent diagnostic criterias, geographic area, duration of study, genetic differences, and exposure rate to cytotoxic agents.

Pancytopaenia is a common haematological entity seen in routine practice. It poses diagnostic difficulty both for the clinician as well as the pathologist. The overall outcome depends on the clinical condition related to the underlying cause and its severity, so it may vary from one individual to another.

Diagnosis of this entity requires a combination of investigations. A single test is not sufficient for reaching at the correct aetiological pathology. The overall prognosis and further management depends on the underlying aetiology. So an early and accurate pathological diagnosis is pertinent in all the cases.

I Raz E Shinar A Polliack Pancytopenia with hypercellular bone marrow—a possible paraneoplastic syndrome in carcinoma of the lung: A report of three casesAm J Hematol1984164403810.1002/ajh.2830160411