Abid, Sen, and Bandyopadhyay: Clinicopathological study of urothelial neoplasms in urinary bladder with special reference to expression of Her2/neu and Ki-67 in malignant lesions

Background: Urothelial carcinomas are the fourth most common tumors worldwide. Studies have shown that Her2/neu is associated with increased tumour grade and Ki‐67 is related to tumour recurrence and stage progression. As no such study has been undertaken is this region, the present study was aimed to establish Her2/neu and Ki-67 as novel prognostic markers of urothelial neoplasms.

Aims and Objectives: To evaluate the clinical profile of urothelial neoplasms and correlate the expression of Her2/neu and Ki-67 in urothelial carcinomas.

Settings and Design: Observational and cross-sectional study (January 2018-May 2019) in a tertiary care hospital in Eastern India.

Materials and Methods: 40 specimens of urothelial neoplasms were studied. Clinical history of patients was collected. Microscopic examination was done to assess tumour stage and histological grade. Immunohistochemistry with Her2/neu and Ki-67 was performed.

Conclusion: The expression of Ki-67 increased with increase in the grade of the tumour which was suggestive of the prognostic importance of Ki-67. Her2/neu positivity was seen in infiltrating cases. No significant association between the tumor grade and Her2/neu expression, indicated the need for further studies with a larger population group.

Nearly 80% of patients fall between 50 and 80 years of age7 with a male to female ratio of 3:1.8 Its development depends on a combination of genetic and environmental factors.9 Bladder tumors are more common in industrial areas (especially in those associated with petrochemicals), and their incidence is increased with exposure to cigarette smoke and arylamines.9, 10, 11 Painless hematuria is the most common presentation.12

The most common important prognostic markers in clinical use are tumour stage and grade.9, 10 Predicting an accurate prognosis with a single factor is difficult, largely due to significant inter-observer variability in reporting the stage and grade.13, 14 Therefore, role of protein and genetic markers as more reliable prognostic factors need to be studied.15, 16

Ki67 is a non-histone nuclear protein that is strictly associated with cell proliferation. Tumour proliferation measured by the Ki‐67 is related to tumour recurrence and stage progression in urothelial carcinoma. 16

This study was undertaken to analyze the clinicopathological spectrum of urinary bladder neoplasms and to evaluate the expression of Her2/neu and Ki-67 in malignant lesions. The study has attempted to correlate the Her2/neu expression with the tumour stage and grade, with a view to offer anti-Her2/neu therapies and to establish the role of Ki-67 and Her2/neu as prognostic markers. 17, 18

This was an observational, cross-sectional, hospital-based study conducted in the Department of Pathology from January 2018 to May 2019. A total of 40 patients were included in the study, of which 39 cases were diagnosed as urothelial carcinoma. The transurethral resection of bladder tumour (TURBT) and Cystectomy specimens were sent from the Department of Urology. The detailed clinical history of the cases was taken. All specimens were thoroughly examined grossly. The volumes of TURBT specimens were measured. In cystectomy specimens, the location of the tumour, gross appearance and infiltration into surrounding tissue was noted. Representative blocks were obtained after thorough sectioning of the tumour. Sections were prepared and stained with haematoxylin and eosin stain. The TNM classification was used for tumor staging and the 2016 WHO classification for tumor grading.19

Sections were cut from each paraffin block, mounted on poly-l-lysine coated slides and baked on a hot plate at 70ºC for an hour. Slides were then deparaffinized in xylene followed by absolute ethanol and subsequent rehydration in graded alcohol. The secondary detection kit and primary antibodies were used for the immunohistochemistry procedure. Positive controls were taken for the immunohistochemistry staining.

Ki-67 nuclear staining was observed in 1000 tumour cells and the percentage of cells positive was calculated. Each slide was given a value composed of the sum of staining intensity and the proportion of the stained cells. Scores ranged from 0 to 3+. Scores of 1+, 2+ and 3+ were considered to be positive for Ki-67 expression.20

Her2/neu membranous staining was evaluated using the Ventana pathway Her2/neu protocol. Scoring was done on a scale of 0 to 3+. Scores of 2+ and 3+ were considered to be Her2/neu positive.20

Correlation between tumour stage, histological grade and immunohistochemical expression of Her2/neu and Ki-67 in the cases were assessed. 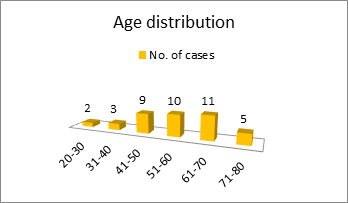 The most common presenting feature was painless hematuria (92%) followed by dysuria (8%). 29 patients diagnosed with urothelial neoplasms had a history of smoking, whereas only 3 patients gave a positive occupational history of working in industries. None of the patients gave a positive family history of urothelial carcinoma. The lesion was located in the lateral wall in 22 patients, followed by the posterior wall in 9 cases, trigone in 6 cases and anterior wall in 3 cases.

Expression of Ki-67 and its association with tumour grade

Only 1 case each of infiltrating carcinoma and low grade non-invasive urothelial carcinoma was negative for Ki-67 immunostaining.

Expression of Ki-67 and its association with tumour stage

Ki-67 expression was determined by the Ki-67 score. Most of the cases with a stage ≥pT2 had a high Ki-67 score (3+) whereas pTa and pT1 had comparatively lower Ki-67 scores. There was a statistically significant association noted between the tumour stage and Ki-67 score (p=0.02). [Table 3]

Expression of Her2/neu and its association with tumour grade

Expression of Her2/neu and its association with tumour stage

Relative proportion of cases based on histopathological diagnosis

[i] Comment: Infiltrating carcinoma comprises majority of the cases

Association of Ki-67 score with the grade of urothelial carcinoma

[i] Comment: There is significant association between the tumour grade and Ki-67 score (p=0.014)

Association between the tumour stage and Ki-67 score

[i] Comment: There was significant association between the Ki-67 score and the stage of tumour (p=0.02)

Association of Her2/neu expression with the grade of urothelial carcinoma

[i] Comment: There is no significant association between tumour grade and Her2/neu expression (p=0.11)

Association of Her2/neu expression with the stage of urothelial carcinoma

[i] Comment: There was no significant association between the tumour stage and expression of Her2/neu (p=0.178) 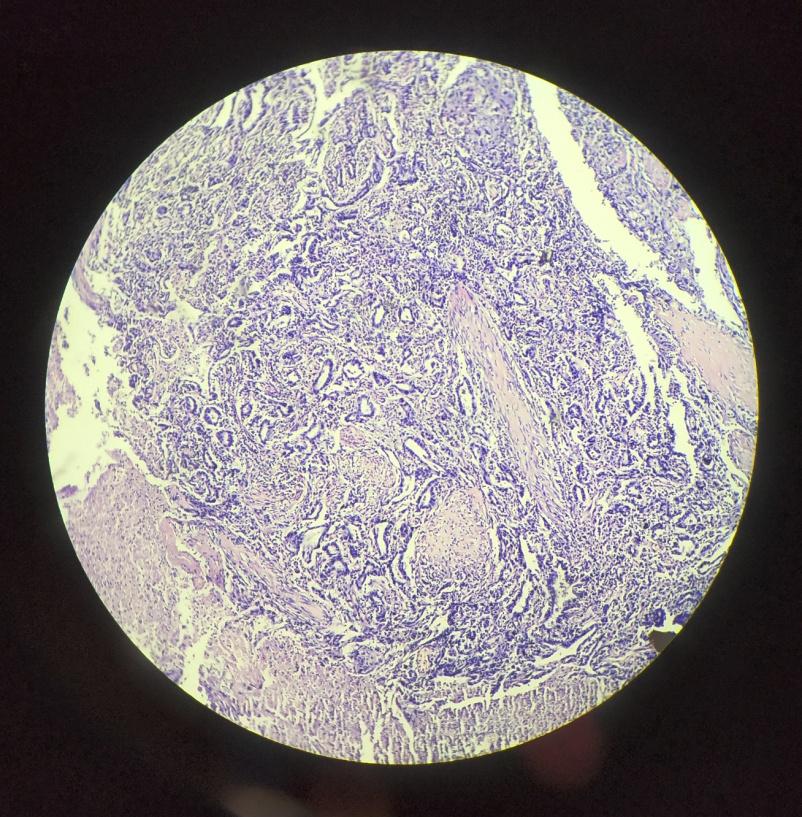 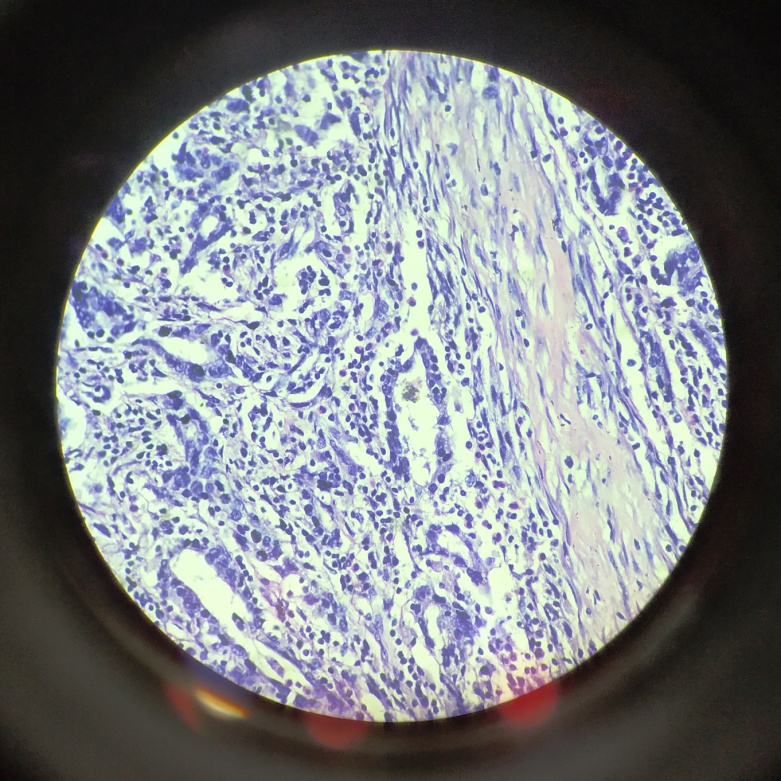 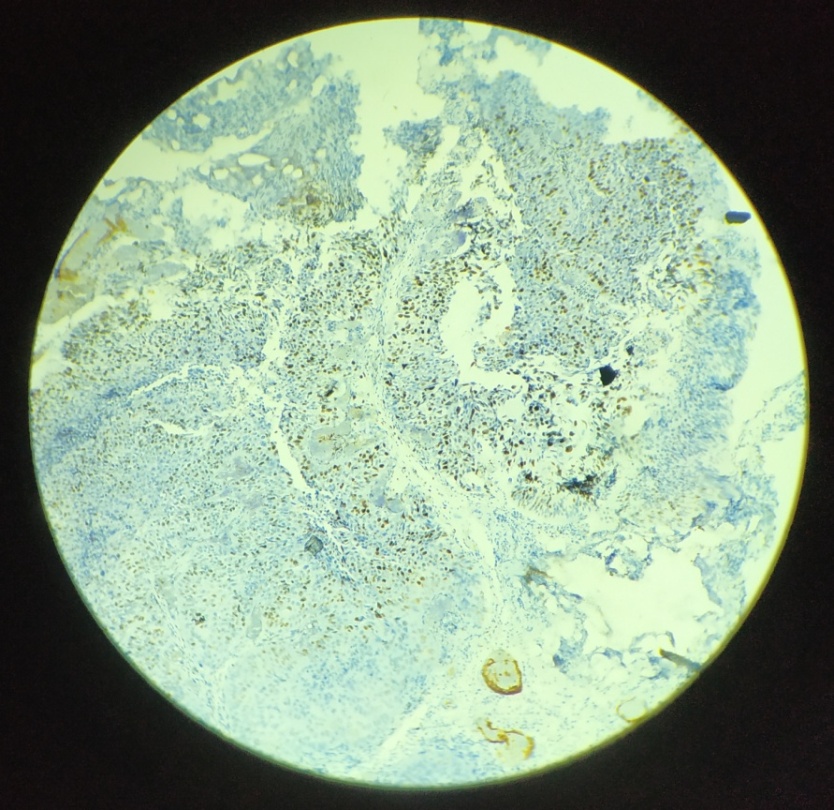 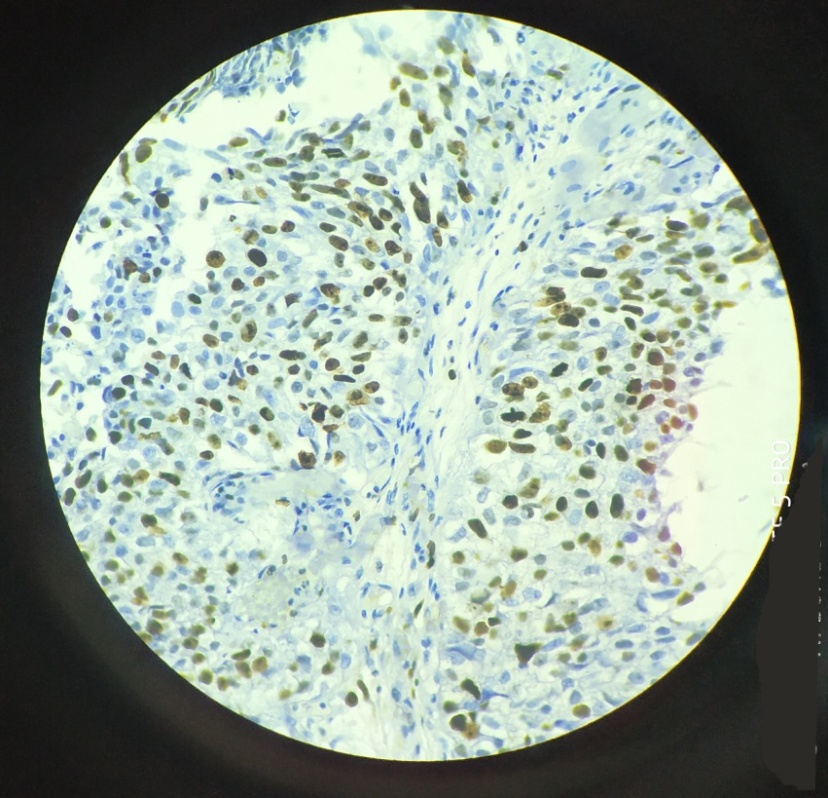 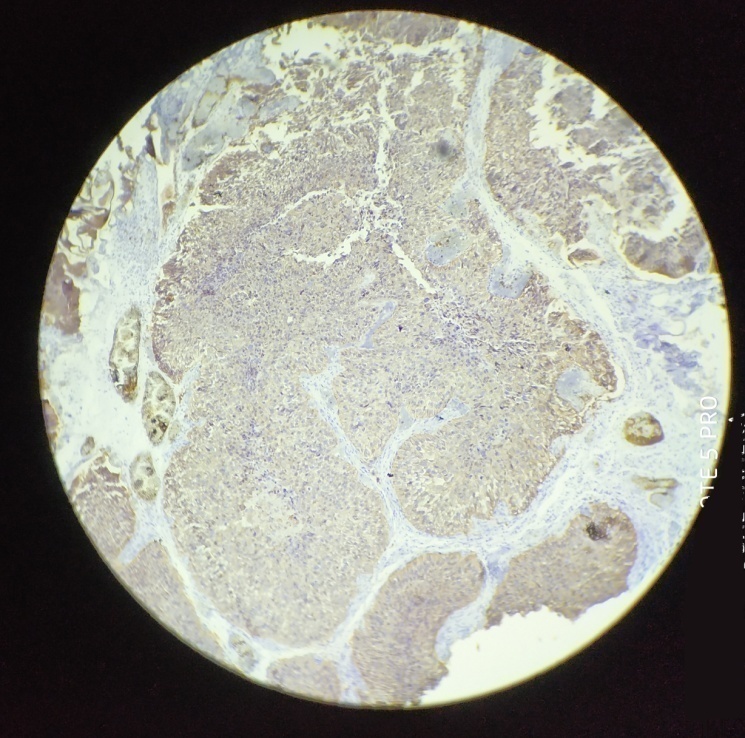 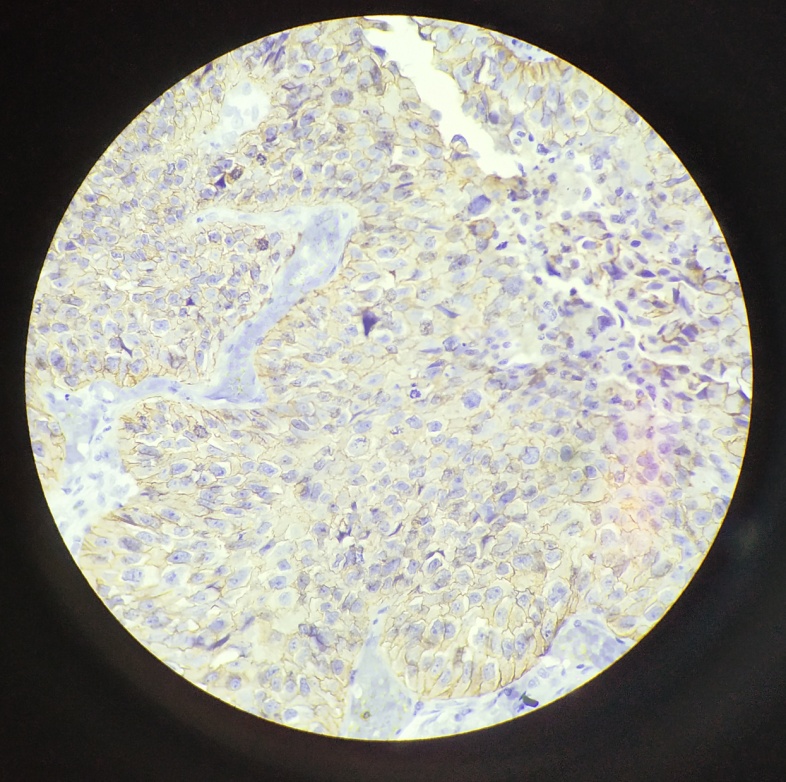 The discussion section is organised in the three lines along which our study has progressed: (1) clinical profile of the patients (2) histopathological diagnosis and (3) immunohistochemistry findings.

In this study, the mean age of the patients was 55.9 years, ranging from 25 to 80 years, with a male to female ratio of 7:1. 92% of the patients presented with painless hematuria. These findings were similar to studies by Gupta et al., and Fujii et al.21, 22

Studies by Fortuny et al. and Zeegers et al. have concluded that patients with history of tobacco smoking were at a higher risk of urinary tract cancer.23, 24 In this study, 72% of the patients presenting with urothelial neoplasms had a history of smoking.

8 cases (20%) were diagnosed as low grade non-invasive urothelial carcinoma, 31 cases (78%) as infiltrating urothelial carcinoma and 1 case as papillary urothelial neoplasm of low malignant potential (PUNLMP). No diagnosis of high grade non-invasive urothelial carcinoma was done during the study period. The grading was done in accordance to the updated 2016 WHO classification of urothelial neoplasms.25 It has to be noted that the differentiation of bladder neoplasms may vary from area to area,26 therefore, a biopsy or transurethral resection may show a different grade from the one found in the surgical specimen.27, 28 The grading system has been devised for its application to non-invasive urothelial neoplasms and it does not have much discriminatory power when applied to the invasive component.9, 29 According to Jimenez et al.29 and Cheng et al.,27 histological grade of invasive component provides no additional prognostic information. Infiltrating carcinomas behave as high grade carcinomas.

Staging of the tumours was done according to the AJCC system (American Joint Committee on Cancer). 8 cases were pTa, 18 pT1 and 13 cases were pT2 or higher. It was therefore noted that early stage carcinomas were higher in this study.

96.8% of infiltrating carcinomas and 87.5% of low grade non-invasive carcinomas showed Ki-67 positivity. A similar finding was noted by Jawad et al.30 A significant association between the Ki-67 score and the grade of the tumor was noted (p=0.014), corroborating with the finding of Elkady et al.31

In our study, Ki-67 score was high (3+) in almost all higher stage tumours (≥pT2) and low in the pTa and pT1 tumours. A significant association was noted between Ki-67 score (Ki-67 expression) and the stage of the tumour.

It was concluded that expression of Ki-67 increased with increase in the grade of the tumour. This finding was suggestive of the prognostic importance of Ki-67. However, there was no significant association between the tumor grade and Her2/neu expression. This study was unable to determine the prognostic value of Her2/neu.

Further studies with a larger population group are required to establish the role of Ki-67 and Her2/neu as prognostic markers.

A Meijden R Sylvester L Collette A Bono FT Kate The role and impact of pathology review on stage and grade assessment of stages Ta and T1 bladder tumors: a combined analysis of 5 European Organization for Research and Treatment of Cancer TrialsJ Urol200016419337