Manjunath and Paul: A prospective study and correlation of cytological, cell-block and histopathological diagnosis of breast lesions

A prospective study and correlation of cytological, cell-block and histopathological diagnosis of breast lesions

Introduction: Breast carcinoma is the second most common cancer in the world and establishing an early diagnosis is clinically very important. Fine needle aspiration cytology (FNAC) is the fast, reliable and ideal initial diagnostic modality for the diagnosis of these lesions.

Materials and Methods: This is a cross-sectional prospective study of 12 months duration. A total of 160 patients underwent FNAC of palpable breast lump/lumps. A cell-block preparation was done for 80 cases and the histopathological examination has been performed on all the 160 cases.

Conclusion: FNAC plays a main diagnostic role as an out-patient procedure which gives rapid diagnosis. FNAC when combined with cell-block can give more accurate diagnosis.

Breast carcinoma is the most common cancer in women worldwide. Cytology having gained importance in diagnostic approach, has gradually moved from an era of 'positive,' 'negative' and 'suspicious' diagnosis to an era of specific morphological typing of breast lesions. Fine needle aspiration cytology (FNAC) today occupies an extremely important place in the pre-operative evaluation of breast lesions since it is easy to perform, reliable, cost effective and out-patient procedure. The most valuable role of cytology in benign lesions is in the identification of epithelial proliferative lesions.1 Triple test is the combination of clinical evaluation, mammography and cytological findings and Triple diagnosis when used in parallel leads to the improvement of pre-operative diagnosis, increasing the diagnostic accuracy rate to 99%.2 The aim of our study is to evaluate the cyto-histopathological correlation of breast lesions in a tertiary care hospital.

A cross-sectional prospective study was conducted at the Department of Pathology in JSS Medical College and Hospital, Mysore over a period of 12 months from July 2016 to July 2017, during which a total of 160 cases with palpable breast lesions underwent FNAC. In 80/160 cases cell block samples were also collected. Information about the patient’s details, clinical and radiological findings were recorded.

FNAC was done under strict aseptic precautions using 22 or 23 gauge needle in a 10 ml syringe. Multiple smears were prepared from the aspirate and those immediately fixed in 95% ethanol were stained using Haematoxylin and Eosin (H&E) and Papanicolaou (Pap) stains and air dried smears were stained using Leishman –Giemsa and May Grunwald Giemsa (MGG) stains.

For making cell block, remaining material in the aspirating syringe, after making enough conventional cytology smears, was clotted and the formed cell button was allowed to fix in 10% neutral buffered formalin for 12 h. Then cell button was removed carefully and wrapped in a Whatman filter and placed in cassette. This sample was then processed as surgical tissue in automated tissue processor. FNAC smears and cell block sections were examined separately for cellularity and reported.

The excised specimens after surgery were subjected to histopathological examination. Deparaffinized sections of the received tissue specimens were stained with Hematoxylin and Eosin (HE) stains. HE stained slides gave the information about the histopathology of the breast lesion. The final diagnosis of each lesion was determined taking biopsy as the gold standard.

The present study was conducted on 160 patients who presented with palpable breast lesions. All cases included were females with age ranging from 18 to 82 years. Maximum numbers of cases were in the age group of 31-40 years (Figure 1). Left sided breast lesion was more commonly seen accounting for 56%. 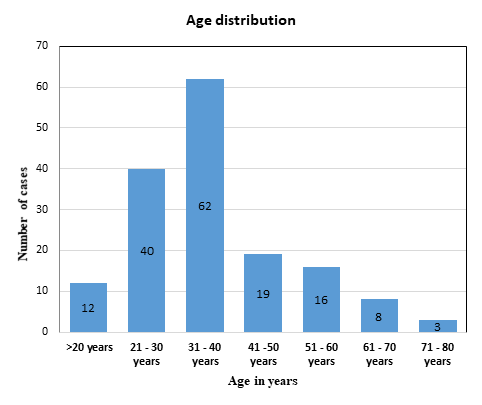 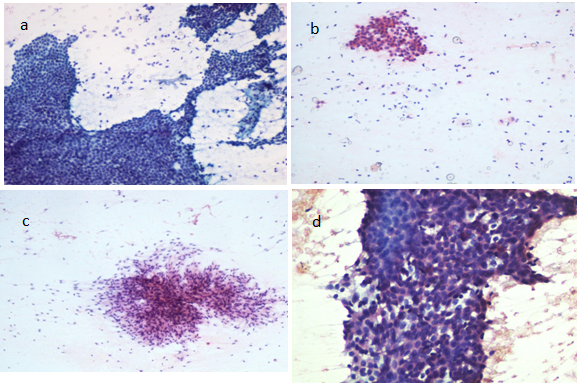 On histopathological examination the benign and malignant cases were studied and classified and is shown in Table 2. Among the benign lesions, Fibroadenoma was most commonly seen (32%) and among malignant lesions, poorly differentiated Invasive Breast carcinoma, no special type (IBC – NST) was more common (16%).

Histopathological diagnosis of benign and malignant lesions on FNAC (n=120)

Correlation of FNAC and histopathological findings

The sensitivity, specificity, positive predictive value and the negative predictive value were calculated as 94.5%, 100%, 100% and 97.01% respectively. The only discordance was with the diagnosis of proliferative breast disease with atypia in FNAC which happened to be Invasive duct carcinoma on histopathology.

Cell block was performed on 80 cases and the distributions of diagnosis are tabulated in Table 4.

The diagnosis on FNAC and cell block findings has been correlated and presented in Table 5. 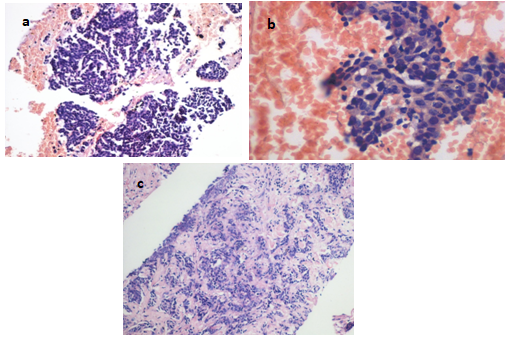 The sensitivity and specificity for the diagnosis of breast lesions in FNAC and Cell block were calculated as 97.5% and 100% respectively. The only discordance was with the diagnosis of proliferative breast disease with atypia in FNAC which was reported as positive for malignancy on cell block.

Correlation of cell block and histopathology

Clinically palpable breast mass is the most common presentation of breast lesions in females. It is also a usual presentation of carcinoma breast.3 Martin and Ellis first introduced the application of FNAC for the diagnosis of palpable breast masses in the year 1930.4 It has since become an increasingly popular diagnostic procedure owing to its distinctive advantages of being easy, fast, sensitive, economical and safe with excellent patient acceptability.5 FNAC of the breast has two main goals. One is to confirm a radiological and clinical benign lesion and avoid unnecessary surgery and the other is to confirm a malignant diagnosis and allow definite treatment planning.6

In the present study FNAC was performed on 160 patients and these were followed for histopathology.

In the present study, 90 cases (56%) presented with lump in left breast, 70 cases (44%) with lump in right breast. Hussain MT has reported left and right breast involvement in 54% cases and 46% cases respectively, in their study.10 In a study by Sushma Yalavarthi et al, most lesions were in left breast, 52.22%.11 Our findings are similar to studies by these authors who also found left breast involvement more than right.

In our study, most common benign lesion diagnosed on cytology was fibroadenoma, 51 cases (32%). This is similar to findings by Varsha Pandey et al.,7 and Pinto et al.10 who also reported fibroadenoma as the most common lesion. Fibroadenoma was confirmed histopathologically also in 51 cases out of 160.

Comparison of accuracy on FNAC

In our present study, the accuracy of cell blocks in identifying the breast lesions is 100%. And there is 100% correlation between the histopathological and cell block diagnosis. According to the study done by Daramola et al,20 181 out of 1790 cases showed equivocal results to detect malignancy, which has been overcome by the use of cell blocks preparations. This shows that the detection rate of breast lesions especially malignancy increases if FNAC is combined with cell-block preparations. The similar results has been seen with other studies like Hegazy et al,23 S. P. Bueno Angela et al,24 N. A. Nathan et al,25 and Obiajulu et al.26

Fine needle aspiration cytology is a simple, cost- effective, highly accurate, quick and relatively less painful procedure which can be used for the diagnosis of breast lumps. Some amount of difficulties can be incurred in the approach to diagnosis. This can be overcome by the use of cell-block along with FNAC which makes the diagnosis easy and reliable.