Manjunath, Manjunath, and Basavaraj: Evaluation of S-100 immunostaining in the demonstration of nerve changes in tuberculoid and borderline tuberculoid leprosy - A descriptive, prospective and retrospective analytical study

Evaluation of S-100 immunostaining in the demonstration of nerve changes in tuberculoid and borderline tuberculoid leprosy - A descriptive, prospective and retrospective analytical study

Materials and Methods: This was a descriptive, prospective and retrospective analytical study, which included patients with tuberculoid spectrum of leprosy. Histopathological examination (HPE) and immunohistochemical (IHC) analysis were performed on all skin biopsies using HE stain and S-100 immunostain, respectively. Then the sensitivities of both the stains in discerning the nerve involvement were calculated and the data was analyzed using SPSS software version 22 by applying chi-square test.

Results: The study included a total of 58 patients [tuberculoid (n=28), borderline tuberculoid (n=30)]. The mean age was 43 yrs. The most common clinical manifestation was hypopigmented patches (n=40, 70%) with loss of sensation (n=39, 68.3%). HPE revealed 36 cases with well-defined granulomas, 22 cases with ill-defined granulomas and 41 cases with nerve destruction. IHC analysis showed four different patterns of nerve damage (fragmented, n=32; infiltrated and fragmented, n=14; infiltrated, n=10; intact, infiltrated and fragmented; n=1). The sensitivity and positive predictive value (PPV) of HE staining in delineating the nerve involvement were 68.96% and 100%, respectively. Whereas, the sensitivity and PPV of S-100 IHC were 100% each.

Conclusion: Use of S-100 IHC along with HPE aids in early, accurate and confirmatory diagnosis.

Leprosy is a chronic inflammatory and neurotropic disease caused by acid fast bacilli, Mycobacterium leprae (M. leprae) and generally affects skin and peripheral nerves; however, other organ systems may also be affected. According to the National Leprosy Elimination Programme (NLEP) progress report for the year 2014-15, there has been a drastic decrease in the prevalence rate of leprosy in India.1, 2

It is well-known that histopathological examination of skin biopsy is important in the diagnosis of leprosy.3 The infection is often first evidenced in peripheral nervous system and the bacilli probably enter the nerves via endoneural blood vessels, which ultimately target the Schwann cells.4, 5 Therefore, nerve injury is a key aspect in the pathogenesis of leprosy.

In patients with early leprosy of both tuberculoid and lepromatous type, the abnormalities in nerve conduction studies and a histological picture of small fibre loss, with segmental demyelination and remyelination has been demonstrated. An impairment of cutaneous nerve fibres due to inflammatory reactions serves as a distinguishing feature for the diagnosis of leprosy from other cutaneous granulomas. Routine histopathological examination using hematoxylin and eosin (HE) stains cannot always determine the nerve twigs within a granuloma; whereas, S-100 immunostain, an immunohistochemical marker of Schwann cells, can be used to delineate the nerve involvement in tuberculoid leprosy.6

Several studies have evaluated the use of S-100 as an auxiliary diagnostic marker of leprosy.7, 8, 9, 10, 11, 12 This paper reports the results of a study which investigated the use of S-100 for the early diagnosis of tuberculoid and borderline tuberculoid leprosy and compared the sensitivity of H and E stain with S-100 immunostain in discerning the nerve involvement.

A descriptive, prospective and retrospective analytical study was conducted at the Department of Pathology in a tertiary care centre over a period of 4 years. The skin biopsies of all histopathological cases of tuberculoid (TL) and borderline tuberculoid (BTL) were included in the study. Skin biopsies of all cases of lepromatous leprosy and those in type 1 and 2 reactions were excluded from the study.

All cases with the tuberculoid spectrum of leprosy were included in the study after retrieving appropriate clinical details from both retrospective as well as prospective cases. Based on a careful histopathological diagnosis, cases were diagnosed as TL or BTL.

A 3 to 5 mm punch biopsies of the representative skin lesion of the patients were received and stored in 10% formalin for histopathological examination. Further, the blocks which were prepared from these skin biopsies were utilized for performing immunohistochemistry using S-100 antibody.

Deparaffinized sections of the received tissue specimens were stained with HE stain and Fite-Faraco. HE stained slides gave the information about the histopathology of the skin lesion whereas Fite-Faraco stain helped to ensure the presence of Mycobacterium leprae, which are acid-fast organisms.

As shown in Table 1, 34 (58.3%) patients were females, the mean (SD) age at presentation was 43 ± 16.8 years and the age ranged from 14 years to 81 years. The majority of cases were seen in fifth decade of life followed by fourth decade of life, with a female preponderance.

The histopathological features of the skin biopsies were characterised by the presence of granulomas along the neurovascular bundles in both superficial and deep dermis. The granulomas were composed of epithelioid cells, lymphocytes and langhans type of giant cells. Epidermal changes were also noted.

Distribution of observed clinical features across the study cases

Distribution of casesaccording to histopathological and immunohistochemical analysis

The perineural infiltration was seen in all the study cases. There was destruction of nerves in 40 out of 58 cases. The nerve fibres were well delineated in 11 cases, partially delineated in 29 cases and the nerve destruction was not appreciated in 18 cases.

Most of the study cases (75%) showed unremarkable epidermis with few of them showing thinned out epidermis. Other epidermal changes which were noted include mild orthokeratosis, parakeratosis, acanthosis and focal exocytosis of lymphocytes.

Fite-Faraco staining was done in all the study cases to check for the presence of acid-fast bacilli. A total of four cases (6.9%) showed presence of lepra bacilli, which were from BTL group.

On S-100 immunoperoxidase staining the nerve involvement was described under 4 patterns: Infiltrated, Fragmented, Absent and Intact. 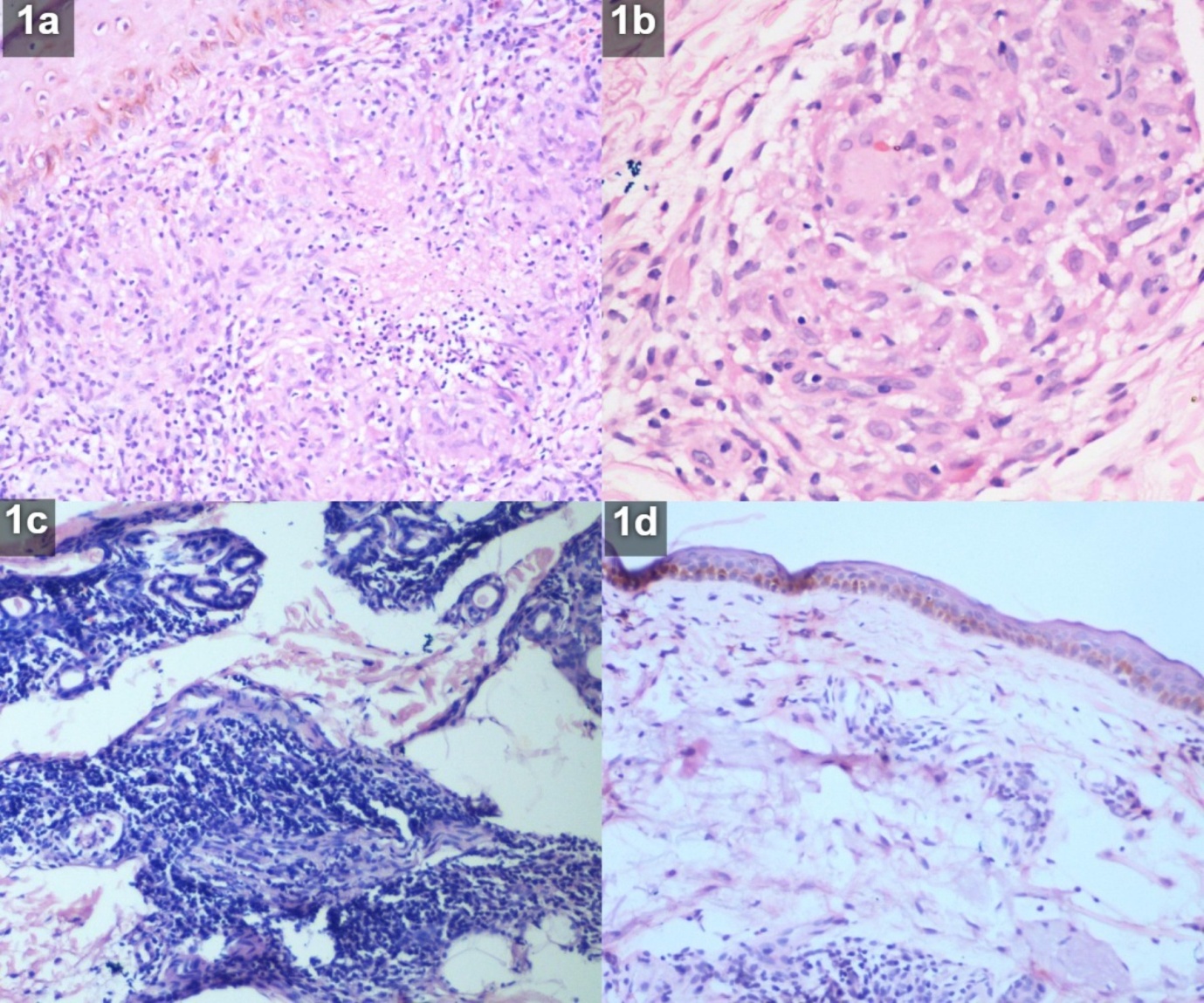 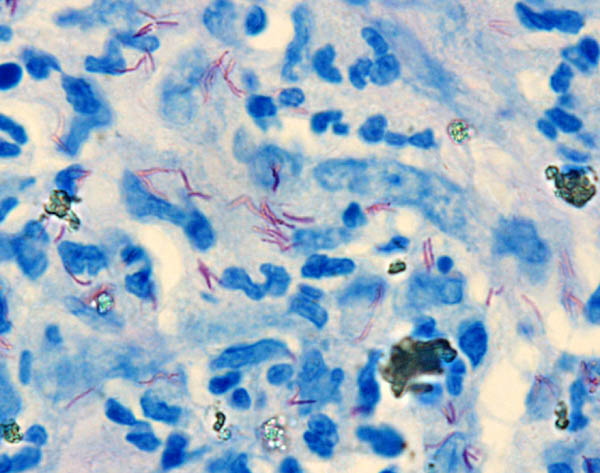 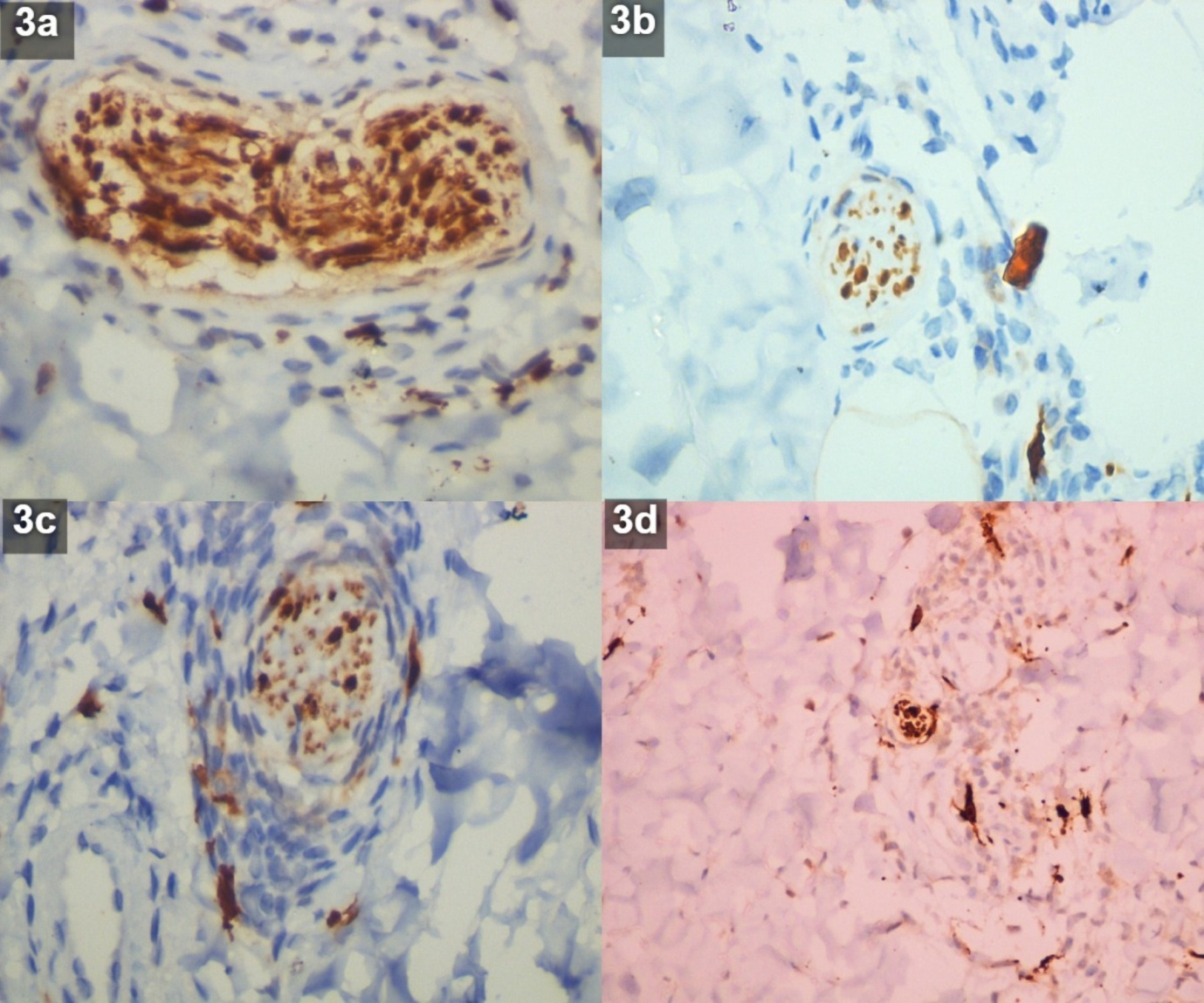 Identified as dark staining, fibrillar structures arranged in a wavy pattern with surrounding inflammatory cells. This pattern indicates that there is infiltration of perineurium by lymphocytes around the recognizable nerve fibre.

Identified as small, dark staining structures within granuloma which are identified as nerve fragments because of their fibrillar and wavy appearance though no intact nerve could be visualized. This pattern indicates a more advanced stage of nerve destruction.

No dark staining fibrillar structures within or outside the granuloma. This pattern indicates that there is complete destruction of nerves beyond recognition.

Dark staining, large fibrillar structures in a wavy pattern with no inflammatory cells inside. This pattern ruled out tuberculoid leprosy.

Although the incidence of leprosy is decreasing, the expertise and the accuracy to diagnose leprosy have gained importance. Routine histopathological examination using HE staining may not identify nerve damage in all leprosy cases; however, for early and confirmatory diagnosis, recognizing the active destruction of cutaneous nerves by granulomatous inflammation in a skin biopsy is crucial. S-100 immunostaining method is effective in staining Schwann cells and in identifying nerve involvement in tuberculoid spectrum of leprosy cases. Thus, for confirmatory diagnosis of nerve damage, S-100 immunostaining can act as an adjuvant to histopathological examination of skin biopsies in all leprosy cases.

Patients presented in the age group of 14 to 81 years with majority in the age group of 4th to 5th decade. Our patients were slightly older by a decade when compared to other studies where the predominant age group of the patients presented was in 3rd decade.13, 14, 15, 16, 17 Admitting to most of the studies, there was a male preponderance in the presentation of TL and IL whereas the present study showed a female preponderance with male to female ratio of 0.7:1, which was contradictory to other studies.15, 16, 17, 18, 19, 20, 21, 22

In the majority of the study population, clinical observations have demonstrated the presence of hypopigmented patches with loss of sensation followed by erythematous patches. Several literature studies have displayed presence of hypopigmented patches as the predominant finding, a classical presentation of tuberculoid spectrum of the disease which was characteristically found in our study too.15, 18, 19, 23

In the present study, results of histopathological examinations revealed presence of granulomas along the neurovascular bundles, perineural lymphocytic infiltration and presence of Langhans type of giant cells. Further, epidermal changes were also noted in a few.

By and large, the tuberculoid leprosy cases will not show positive acid-fast bacilli (AFB) under Fite-faraco staining. In TL, cell mediated immunity is strongly expressed and the bacillary multiplication is restricted to few sites and the bacilli are not readily found in the skin biopsies. AFB positivity will be displayed in lepromatous spectrum of cases as it represents the failure of cell mediated immunity with resultant bacillary multiplication, spread and accumulation of antigen in infected tissues. The present study showed positivity for fite-faraco in 6.9% (4/58) of cases in tuberculoid spectrum and all the 4 cases were BTL. This result is correlating with the results of other studies.14, 15, 16, 17, 20, 23, 24, 25

On immunohistochemical analysis using S-100 stain, we observed four different patterns of nerve damage: infiltrated, fragmented, absent, and intact. The present study showed fragmented pattern of nerve involvement in 53.6% of the cases of TL, infiltrated pattern in 25% of the cases and both infiltrated and fragmented in 17.8% of the cases. There were no cases which showed intact or absent pattern which correlates with other studies done by Thomas M, et al., 12 and Gupta SK, et al.10 This suggests the nerve damage in TL which correlated with perineural granulomatous infiltration on HE staining which connotes the ongoing destruction process. This also conveys that the disorganization and destruction of dermal nerves is a more consistent finding in the diagnosis of TL than the absence of nerves.

The results of the study demonstrate the advantage of S-100 immunohistochemical staining in the early and differential diagnosis of nerve damage in skin biopsies of leprosy. Use of S-100 immunostaining along with histopathological analysis will aid in accurate and confirmatory diagnosis of TL and BTL.