Shivamurthy and Jaiprakash: Role of imprint cytology in the diagnosis of ovarian neoplasms

Role of imprint cytology in the diagnosis of ovarian neoplasms

Primary ovarian neoplasms constitute a heterogenous group of benign and malignant tumors of epithelial, sex cord–stromal, mesenchymal and germ cell origin. Secondary tumors constitute a minority. The management of benign and malignant ovarian neoplasms varies and it is here that imprint cytology plays a crucial role in diagnosis. It provides a rapid intraoperative diagnosis which will decide further treatment course for the patient. Imprint cytology of ovarian neoplasms is simple, inexpensive, challenging and provides a rapid diagnosis with excellent cellular details. The aim of the present study is to determine the role of imprint cytology in the diagnosis of ovarian neoplasms. A retrospective study was conducted in the department of pathology. A total of 53 cases were included in the study. In 48 cases, the imprint cytology findings correlated with the histopathological diagnosis. 5 cases did not correlate. Epithelial ovarian tumors accounted for the majority, (85%) followed by germ cell tumors (9.4%) and sex cord stromal tumors (5.6%). The sensitivity and specificity were 93.75% and 100% respectively. Thus imprint cytology is an effective cytological method in the diagnosis of ovarian neoplasms. Knowledge of specific cytological features for each tumor type helps in accurate diagnosis which in turn is valuable in immediate appropriate treatment and management of patients with benign or malignant neoplasms.

Ovarian neoplasms are a diverse group of tumors which exhibit a spectrum of morphological characteristics, clinical manifestations, genetic alterations, and tumor behaviors. This high degree of variability presents a major challenge in both diagnosis and treatment. Imprint cytology provides a rapid intraoperative diagnosis which will decide further treatment course for the patient.1, 2, 3, 4, 5 It is a simple, inexpensive, challenging and provides a rapid diagnosis with excellent cellular details. Knowledge of both cytological and histopathological features plays a crucial role in accurate diagnosis, which in turn affects patient management. An accurate final histological diagnosis is important owing to the major differences in incidence, tumor behavior and clinical outcome between each histologic subtype.6, 7, 8, 9, 10, 11 Hence the aim of the present study is to determine the role of imprint cytology in the diagnosis of ovarian neoplasms

A retrospective study was conducted at the department of pathology from January 2011 to December 2015 for a period of five years. A total of 53 cases were included in the study. Imprint cytology smears stained with hematoxylin and eosin (H & E) were reviewed along with respective frozen sections and routine histopathology slides. Imprint cytology slides and scrape smears were made immediately from representative solid areas on cut section of the ovarian masses which were sent for frozen section analysis. The slides were wet fixed and stained with H & E stain. The distinct cytological features on imprint smears and scrape smears were noted in each case. The diagnosis made on imprint cytology were correlated with the final histopathology diagnosis in each of these cases. The sensitivity, specificity and diagnostic accuracy of the test were calculated. Statistical analysis was made using SPSS v26.

A total of 53 cases of ovarian tumors, having imprint smears, frozen section slides and routine histopathology slides were included in the study. The age ranged from 18-78 years. Epithelial ovarian tumors accounted for the majority, (85%) followed by germ cell tumors (9.4%) and sex cord stromal tumors (5.6%).

Among the surface epithelial cell tumors, serous and mucinous tumors accounted for the majority, most common being serous and mucinous cystadenomas (33.3% each). There were two cases of malignant endometroid carcinoma and 1 case each of benign endometrioid tumor, benign brenner tumor and clear cell carcinoma.

Sex cord stromal tumors accounted for a minority group in the present study represented by 1 case each of fibroma, fibrothecoma and Sertoli-Leydig cell tumor.

In 48 cases, the imprint cytology findings correlated with the histopathological diagnosis. In 5 cases, imprint cytology findings did not correlate with the final histopathological diagnosis. These were one case of mixed germ cell tumor with yolk sac component and embryonal component, one case of endometrioid carcinoma was misdiagnosed as cystadenocarcinoma, one case of mucinous carcinoma which was misdiagnosed as borderline mucinous tumour and two cases of borderline mucinous tumour which were misdiagnosed as a mucinous cystadenomas. Thus the sensitivity and specificity were 93.75% and 97% respectively.

Intraoperative evaluation of tumors was mainly done through frozen sections until 1927 when cytology was introduced as one of the methods of intraoperative evaluation by Dudgeon & Patrick.12, 13 Presently in ovarian lesions, studies have reported that imprint and scrape cytology have diagnostic accuracy comparable to frozen sections with crisp cellular details. Being the eighth most common cancer among women, it includes about 4% of all women’s cancers. It has the highest morbidity and mortality rates among cancers of the reproductive system.2, 4, 5, 10

Ovarian neoplasms have extensive heterogeneity both within and between histologic subtypes.14, 15 In addition to age specific clinical and radiological features, a thorough knowledge of specific cytological features [Table 5,6] of each subtype is crucial to make an accurate diagnosis on imprint cytology and frozen sections. 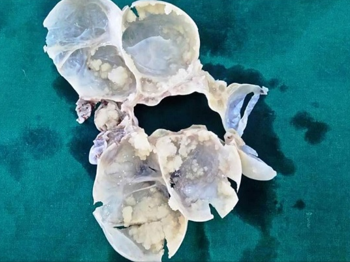 Microphotograph shows cells arranged in a branching pattern in a serous cystadenoma. [H&Ex100] 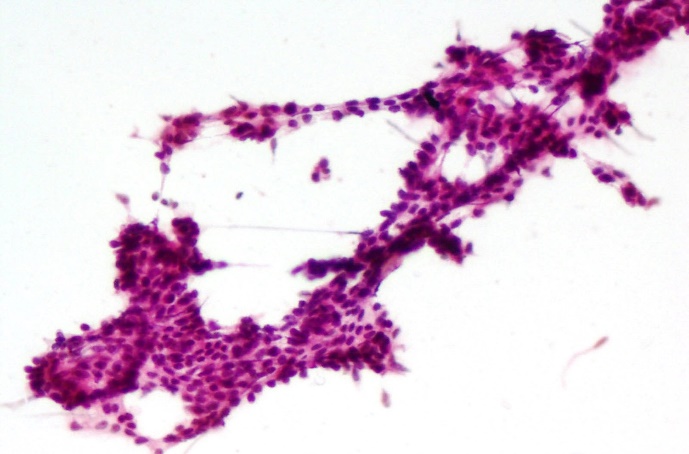 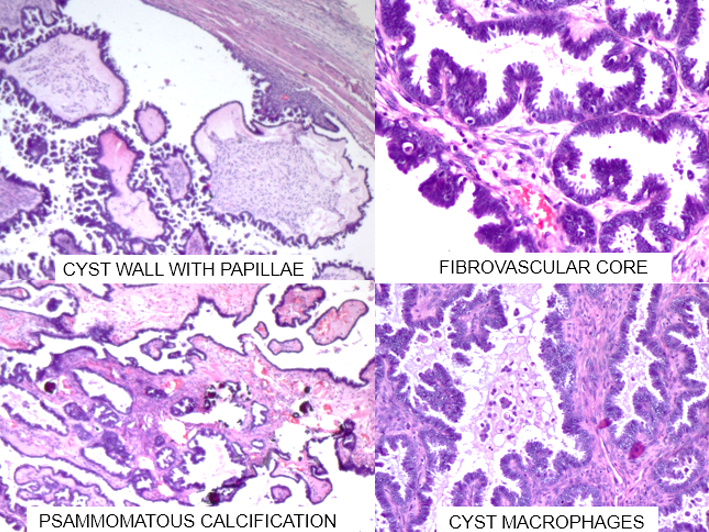 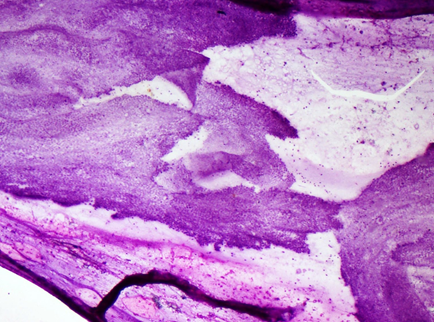 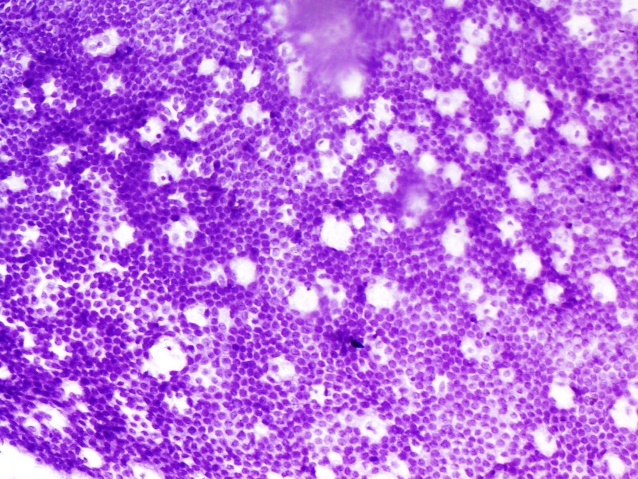 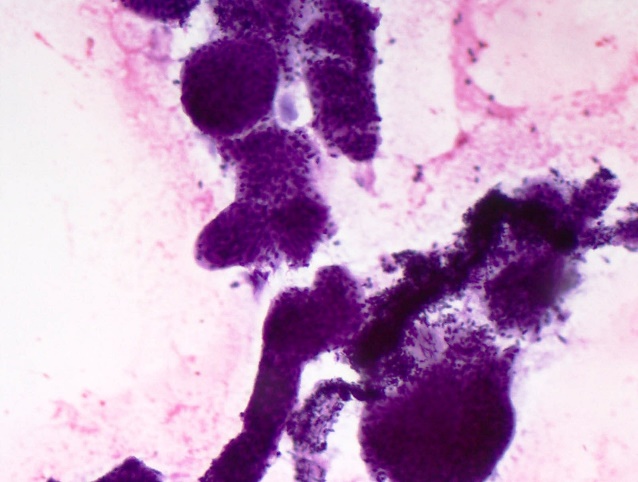 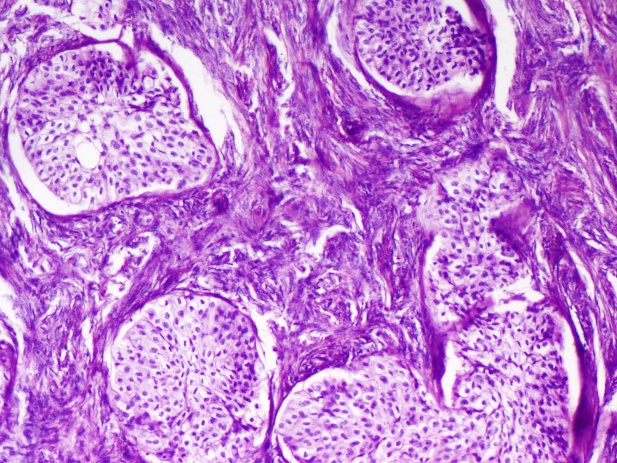 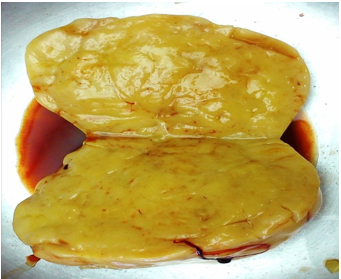 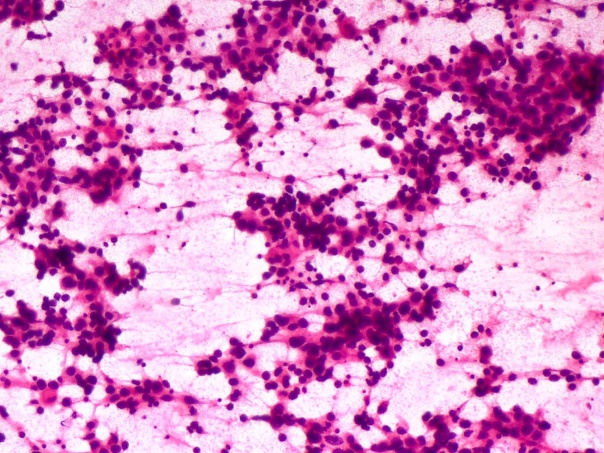 Often ovarian malignancy is diagnosed at an advanced staged owing to a number of reasons. The anatomical problem being one of them. The ovaries are a tiny pair of organs, suspended on either side of the uterus. Unless significantly enlarged, they are not easily accessible by pelvic examination. Hence majority of cases present at an advanced stage with a poor 5-year survival rate. Thus accurate diagnosis is important for immediate treatment and management.2, 3, 8, 10, 15

The accuracy of aspiration cytology diagnosis in patients with ovarian enlargement or cancer was reported by Vijaykumar A,1 Melies M et al2 and Sireesha A et al.3 In these reports, ovarian cancer was accurately identified in approximately 85-95% cases.

Comparison of various studies with the present study

Comparision of sensitivity and specificity with other studies

A careful gross examination is also very important and may be as accurate as frozen section and often avoid delays in diagnosis. Diagnosis of borderline tumors on imprint cytology is challenging. The pitfall includes remarkable heterogeneity of tumor from area to area within the same ovarian mass and sampling error.6, 7 With respect to mucinous tumors, focal mild atypia can lead to a false positive diagnosis of mucinous borderline tumor. Therefore mucinous borderline tumors should have a significant proportion of cells showing nuclear atypia and overcrowding.14, 15 A few authors have also stated the issue of technical factors and quality of frozen sections to influence the diagnosis. A confirmatory diagnosis of borderline neoplasia would require a less extensive surgical procedure, especially in younger patients who wish to retain fertility.10, 12

Intraoperative imprint cytology & frozen section are of immense value in diagnosis of ovarian tumors especially in guiding the surgeon within a short period of time. Knowledge of specific cytological features for each tumor type helps in accurate diagnosis which in turn is valuable in immediate appropriate treatment and management of patients with benign or malignant neoplasms.