Background: Malignant Brenner tumor (MBT) is a rare epithelial ovarian tumor that has been not well documented in the literature. Clinical features, serum markers, and imaging studies are non-specific for the diagnosis.

Case Report: We report a case of a 76year old female who presented with complaints of bleeding per vaginum and underwent laparotomy. After an extensive sampling of the specimen, histopathological examination revealed features of malignant Brenner tumor. To support the histological diagnosis immunohistochemical markers were done.

Result: The non-specific findings on ultrasonography were resolved with histopathological and immunohistochemical markers.

Conclusion: MBT is a rare tumor with no specific clinical or imaging findings. The application of histopathological criteria and immunohistochemistry aids in definitive diagnosis.

Ovarian neoplasms are a heterogeneous group of tumors that are classified based on their derivation from surface epithelium, germ cell, sex-cord stromal cell. Brenner tumor comes under epithelial groups of ovarian tumor which constitutes 1-2% of all ovarian tumor.1 Brenner tumor is commonly seen in post-menopausal women. Histologically Brenner tumor is composed of round nests of transitional epithelial cells surrounded by dense fibrous stroma. This rare Brenner tumor (BT) is categorized as benign, borderline, and Malignant Brenner Tumor (MBT). Most of the Brenner tumors are benign, whereas only less than 5% are malignant.2 MBT has a pleomorphic nest of the transitional epithelial cell with nuclear atypia and stromal invasion. MBT are small tumor which is partially solid and cystic. Imaging studies are non-specific for diagnosis of MBT, which will be confirmed only on histopathological examination. An important differential diagnosis of MBT is transitional cell carcinoma (TCC) of the ovary. TCC has a poor prognosis therefore it should be differentiated from MBT based on histological features and few immunohistochemical(IHC) markers.1, 3 Here we report a rare case of Malignant Brenner tumor in a 74 -year old post-menopausal woman.

A 76-year old postmenopausal woman presented with complaints of bleeding per vaginum. She was a known case of diabetes mellitus, hypertension, and coronary artery disease for five years on medication. On physical examination, there was no palpable mass per abdomen. On Ultrasonography imaging, the endometrial thickness was 8mm, and the left adnexa shows a 9.4x 7x 6.2 cm heterogeneously hyperechoic lesion with both solid and cystic components. CA-125 was 4.27 U/ml which was within the reference value. The Patient underwent laparotomy for the left ovarian mass. Total abdominal hysterectomy with bilateral salphingo-opherectomy with omental biopsy was sent to our department for histopathological examination.

On macroscopic examination, the uterus was unremarkable, cervix showed a nabothian cyst. The Right ovary measured 1.5x1x0.5 cm and was unremarkable. Bilateral fallopian tubes were unremarkable. The Left ovarian mass measured 12x8x5cm which was partially solid and partially cystic. The Solid area measured 5.5x5 cm which was a grey-white, soft, and mucoid filled cyst ranging from 0.5 cm to 2 cm in diameter was seen. The wall of the cystic area was in continuity with the solid area. Serial sectioning revealed the same features. The cystic area measured 8x5 cm which was uniloculated with an average wall thickness of 0.5 cm. the inner surface of the cyst (Figure 1 a&b). Multiple sections were taken from the representative areas.

On Immunohistochemistry, strong cytoplasmic positivity of Cytokeratin 7 and p63 nuclear positivity was seen in the tumor cell nest. The tumor cells were negative for p16 (Figure 4). With the above mentioned histological features and IHC marker, diagnosis of Malignant Brenner Tumor of left ovary was made.

a): Gross photograph of the outer surface of the tumor which is bosselated; b): Cut section of the tumor showing a partly solid and cystic area 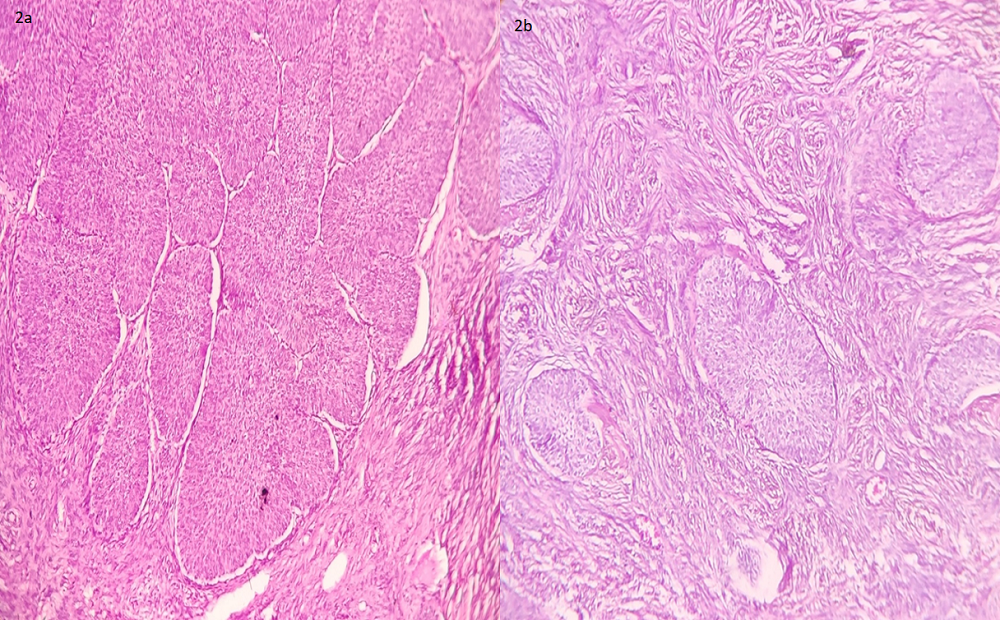 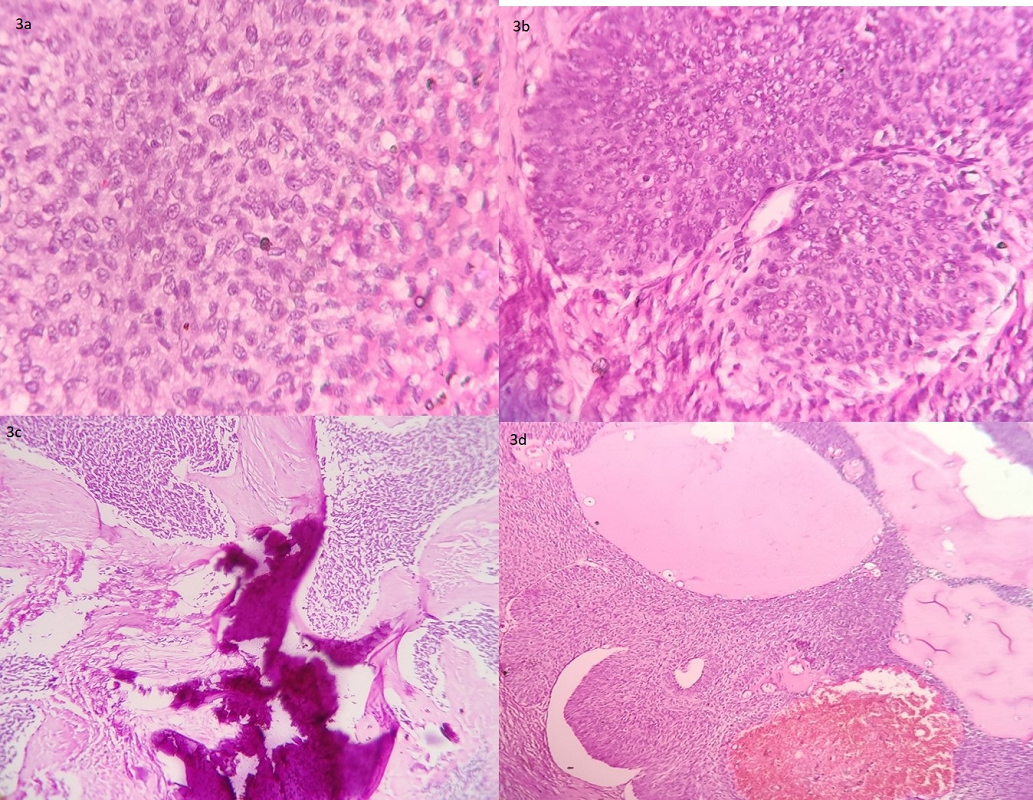 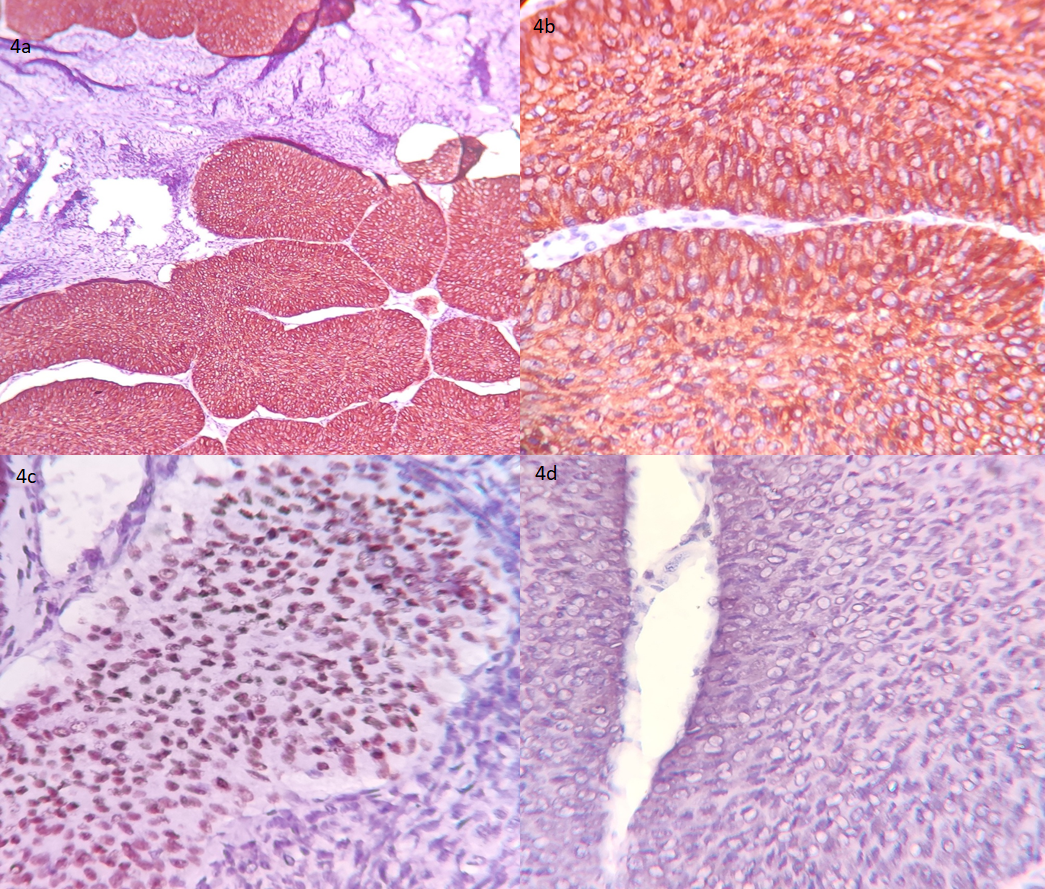 The term Brenner tumor was first coined by Robert Meyer in 1932, which was named after Fitz Brenner who characterized it in 1907. MBT was first described by Von Numbers in 1945.4 After that, there are only a few reports on Malignant Brenner in literature which makes this a rare case report. MBTs are seen in women in the 5th to 7th decade of life with a predilection to postmenopausal women. Most patients present with abdominal pain or distension. Malignant Brenner presents with postmenopausal bleeding because of associated lesions like endometrial polyposis, hyperplasia, or adenocarcinoma. Malignant Brenner may be an incidental finding in most of the women.3 Our case was a postmenopausal woman in the 7th decade of life presented with an abdominal mass and postmenopausal bleeding. Radiological imaging is not of much use in pre-operative diagnosis of MBT because of the non-specific appearance in ultrasonography and computed tomography. MBT is mostly solid with a cystic area. Imaging studies show the appearance of solid ovarian tumors like fibroma, fibrothecoma or teratoma.3, 5 Hence the definitive diagnosis of MBT is only on histopathological examination.

Most of the MBT is usually unilateral (>80%) and occasionally bilateral. MBT is a circumscribed, fibromatous tumor with solid and cystic areas.2

By definition, BT is an epithelial ovarian tumor composed of nests of bland transitional/urothelial epithelium set within a dense fibromatous stroma.2 BT are mostly benign tumors, even though there is a wide spectrum between benign and malignant tumors. Many theories were proposed for the origin of BT two important theories are: 1) BT found to arise from ovarian mesoepithelium 2) Walthard cell nests in the ovary and fallopian tubes have been described in association with Brenner tumor and mucinous tumor.6

A Malignant Brenner tumor is an ovarian carcinoma resembling an invasive urothelial carcinoma, associated with benign or borderline Brenner tumor. Malignant forms are very rare and found to arise from the benign and borderline component of Brenner tumor.2 Microscopically we will find a benign or borderline component which is an important feature in the diagnosis of MBT. There is a criterion proposed by Hull and Campbell for diagnosis of MBT: 1) Malignant component should be established histopathologically. 2) Intimate association between malignant and benign components. 3) Mucinous component may be present, but mucinous cystadenoma should be preferably absent or well separated from a benign and malignant component. 4) Stromal invasion by epithelial elements of MBT should be demonstrated. Our case had a frank malignant component of papillae and a solid nest of the pleomorphic transitional epithelial cell with nuclear atypia, stromal invasion, and foci of benign Brenner component. There were few mucin filled cyst seen. There was no mucinous cystadenoma component. These fulfill the above-mentioned criteria for the diagnosis of MBT.6

Transitional cell carcinoma (TCC) of the ovary which also has transitional epithelial cell and is a differential diagnosis of MBT. TCC has a worse prognosis hence it should be differentiated from MBT which has a good prognosis. It was proposed that TCC arise directly from the pluripotent surface epithelial cell and urothelial potential cell, whereas MBT arises from benign and borderline Brenner tumor component. Therefore, TCC lacks the benign Brenner component which helps in diagnosis. Henceforth meticulous grossing and extensive sampling is required for proper diagnosis of MBT. Apart from this stromal calcification is absent in TCC which is seen in MBT.7 In the present case, there was a focus of BT and stromal calcification which points towards MBT rather than TCC.

There are no specific tumor markers for MBT due to its rarity and variable histological criteria. MBT shows positivity for uroplakin, thrombomodulin, GATA3, and CK7 as seen in Brenner tumor. All Brenner tumors show p63 positivity which aids in differentiating MBT from TCC. MBT lack p16 expression whereas TCC shows overexpression of p16. Apart from histological features, p16 helps in differentiating TCC from MBT.1, 8 CK 7 showed strong cytoplasmic positivity and p63 diffuse nuclear positivity in our case. CA72-4 and SCC antigen can be elevated in some cases of MBT. CA72-4 and CA-125 aids in identifying the burden of the tumor and follow-up of the patient.3

Most of the MBT is confined to the ovary, hence complete surgical resection remains the mainstay of treatment. Platinum-based adjuvant chemotherapy with paclitaxel has improved the survival rate of the patients.8, 9 MBT confined to ovary (stage I) has a good prognosis with a 5-year survival rate of 88%.7

MBT is a rare tumor, with few reports in literature we like to add information of MBT from our case. MBT has a good prognosis compared to TCC hence extensive sampling should be done for diagnosis. The imaging study of MBT is non-specific for diagnosis. Only histopathological examination with immunohistochemical markers can confirm the diagnosis of MBT.