Rhabdoid tumor of kidney is one of the uncommon pediatric renal neoplasms with highly aggressive clinical course. We are presenting a case of 1 year child with abdominal distension and hematuria. On Contrast enhanced computed tomography (CECT) a heterogenous mass in lower pole of kidney was detected. Histopathological and immunohistochemical study after radical nephrectomy revealed Malignant rhabdoid tumor of kidney. It has a tendency to metastasize early and it is associated with synchronous presence of other malignancies. No definite effective treatment for this tumor is available till now. This further necessitates the early diagnosis and prompt management which can be life saving for the patient. We are presenting this case to emphasize on its rarity and aggressive clinical behaviour.

Incidence of childhood cancers is 1% of all cancers and pediatric renal tumors constitute 6-7% of all childhood cancers.1, 2 Rhabdoid tumor of kidney (RTK) accounts for 0.9% among the pediatric renal tumors as per the International Society of Pediatric Oncology (SIOP) data and 1.8% of malignant childhood renal tumors according to National Wilms Tumor Study Group (NWTS).3 It has been reported in liver, pancreas, gastrointestinal tract, retroperitoneum, mediastinum, urinary bladder, soft tissue (malignant rhabdoid tumors) and central nervous system (known as atypical teratoid/rhabdoid tumors).4 We are reporting the case due to its rarity and aggressive clinical behaviour.

A 1-Year male child was admitted in paediatric surgery OPD with the complains of lump in the abdomen since 1 month and hamaturia since 8 days. He had no known comorbidities. On examination his pulse rate was 80 per minute and BP was 140/70 mm of Hg. On inspection ha had an ill-defined lump of about 5x5cm in the left lumbar region. Swelling moved vertically with respiration. On palpation there was an ill-defined mass of about 7x7am extending from left subcostal margin till 1cm above left antero-superior iliac spine (ASIS). Lower margin of mass was well-defined and upper margin extended beyond subcostal region. It was firm to hard in consistency, and was ballotable. Contrast enhanced computed tomography (CECT) revealed a well defined exophytic soft tissue mass in left lower pole showing internal necrosis and haemorrhage without any calcification (Figure 1 A). Mass was displacing small and large bowel antero-medially and left ureter medially with no evidence of any infiltration to ureter or adjacent bowel. No extension of lesion/ thrombus in left renal vein/IVC(Inferior vena cava) was noted. No retroperitoneal lymphadenopathy was seen. The radiological diagnosis was s/o Wilms Tumour. Routine complete blood count (CBC) showed TLC-8800/cmm, Hb-11.3 gm/dl, TPC-4.12 Lakh /cmm. Liver function test (LFT) was unremarkable. A/G ratio was 2.44, sr. Urea-21mg/dl, sr Creatinine-0.15mg/dl, sr Sodium-135mmol/L, sr Potassium-4.4mmol/L, sr Calcium- 9.2mg/dl, sr Phosphorus-5.3 mg/dl, sr Uric acid-4.9 mg/dl. Final clinical Diagnosis was Wilms Tumour Of Left Kidney. Patient underwent Radical Nephrectomy under GA. Intraoperatively a solid mass was seen arising from the lower pole of the left kidney with necrotic areas. It was adherent to the transverse and descending colon. 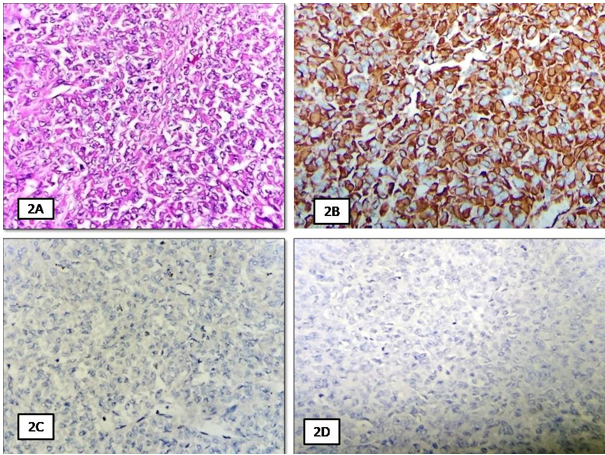 Beckwith and Palmer first described the entity in 1978 as “rhabdomyosarcomatoid variant of Wilms tumor” due to the histologic similarity of the tumor cells to rhabdomyoblasts. Later with further immunohistochemical and cytogenetic studies it was confirmed to be a separate distinct tumor entity.5 Clinically patients present with mass in abdomen, hematuria and pain. RTK has propensity to metastasize very early to distant sites. Symptoms arising from metastases are common at diagnosis, which mainly affect the lungs, liver, brain, and less commonly bone.6 Radiological evaluation can help in differentiating RTK from its closest mimicker i.e. Wilms tumor. Presence of lobulated heterogeneous mass with areas of hemorrhage, necrosis and calcification, sub-capsular fluid accumulations, vascular and local invasion is more favourable for RTK.7

Chromosomal abnormalities associated with RTK are monosomy 22 and  homozygous mutations and/or deletions of SMARCB1 genes responsible for gene transcription and tumor suppressive action. Biallelic inactivation of tumor suppressor gene INI1 leads to loss of nuclear expression of INI1/BAF47 protein, which is essential for development of both renal and extrarenal rhabdoid tumors.9 No effective treatment regimen has been established till now. The prognosis is dismal. Prognosis depends on the stage of the tumor at the time of diagnosis, age of patient and genetic factors. Mortality is 80-90% despite intensive multimodal chemotherapy, radiotherapy and/or surgical treatment.10

Rhabdoid tumor has clinical and good number of morphological differentials. Its clinical course and prognosis is worst. It is resistant to different treatment modalities and metastasizes widely. All these factors make it one of the most notorious pediatric neoplasms which should be diagnosed by the clinicians and pathologists at the earliest to save the life of patients.