Objectives: Hodgkin’s lymphoma (HL) is a B-cell lymphoma characterized by the presence of Reed-Sternberg cells. HL comprises 1% of all cancer cases and 14% of all lymphoma cases. Nodular lymphocyte predominant HL (NLPHL) is a subtype of HL characterized by a unique clinical and histological presentation. The clinical presentation and survival rate of these patients have not been described in Oman. We, therefore, aimed to describe the clinical characteristics and survival rate of patients with NLPHL.

Materials and Methods: This is a retrospective cohort study that was conducted in a tertiary care centers in the Sultanate of Oman. All Omani patients with histopathological confirmed diagnosis of NLPHL from 1998 to 2016 were included in this study. The demographic, clinical, and survival rate were recorded and analyzed.

Results: Forty-six histologically confirmed cases of NLPHL were analyzed with a median follow-up of 72 months (range: 12–228 months). Median age at diagnosis was 26.5 years (range: 13‒53) and 70% of the patients were male. B symptoms were present in 6% and stage I disease was the most common (39%) presenting stage. Patients were treated with radiotherapy (33%), chemotherapy (37%), combined modality (radiotherapy and chemotherapy) (28%), or careful watch-and-wait (2%). Relapses occurred in twelve (26%) patients after a median of 48 months (24–168 months). Two (4%) patients died during follow-up due to relapse of NLPHL.

Conclusion: This is the first study that demonstrates the demographic, clinical, and survival rate of NLPHL patients in Oman. Our study confirms the male predominance in NLPHL patients. The overall 10-year survival was 96%. The outcome was not significantly different with chemotherapy alone or radiotherapy or combined modality. This study showed higher relapse rate; therefore, further study is needed to validate this observation.

Hodgkin’s lymphoma (HL) is a B-cell lymphoma characterized by the presence of Reed-Sternberg cells. According to the reports published from the National Cancer Institute, the incidence of new HL cases was 2.6 per 100,000 men and women per year.1 In United Kingdom for instance, the incidence rate was 3.3 cases per 100 000 population in 2015. In general, incidence is higher in males than in females. The sex predilection is most pronounced in children, with 85% of cases affecting boys. In addition, the incidence of the disease varies with age and with a clear bimodal distribution that is consistent across most countries and studies. The initial peaks are in young adults (15‒34 years) and older adults (> 55 years).2, 3

The exact etiology of HL is not well known. However infectious agents, particularly Epstein-Barr virus as well as genetic predisposition plays an important role in the pathogenesis of HL. The World Health Organization (WHO) has classified Hodgkin’s disease into two biologically and clinically distinct entities: nodular lymphocyte predominant HL (NLPHL) and classical HL (cHL). NLPHL is a rare subtype of HL that accounts for less than 10% of all cases of HL.4 It has distinctive clinical, histological, and immunophenotypic characteristics that enables easy recognition and distinguishing from cHL. Unlike cHL, NLPHL presents usually in an early stage of the disease and has a male predominance (75%). B symptoms are uncommon in NLPHL. Histologically, NLPHL is marked by the presence of lymphocyte predominant cells, previously known as lymphocytic and histiocytic or ‘popcorn’ cells, embedded in nodules consisting of B-cells and other reactive cells (mainly reactive T-cells). In contrast to cHL, Reed-Sternberg and Hodgkin cells are rarely seen in NLPHL.5

The clinical presentation as well as the outcome of NLPHL patients have not been described in Oman. We, therefore, aimed to describe the clinical characteristics and outcomes of patients with NLPHL.

This was a retrospective cohort study conducted in Royal Hospital, a tertiary care hospital in the Sultanate of Oman. The study was reviewed and approved by the ethics committees of the Royal Hospital. All medical records of patients admitted with a diagnosis of HL between January 2006 and June 2016 were identified using the International Statistical Classification of Disease version 10 (ICD-10) coding system. We included all Omani patients, with a histologically confirmed diagnosis of non-classical HL.

Continuous variables were presented as means or medians while categorical variables were presented as frequency and percentage. Age was compared using Student t-test. A p-value of < 0.050 was considered as statistically significant. For survival analyses, initial diagnosis date, remission and relapse date, last visit date and death date of those who died were registered using the hospital records. Overall survival (OS) was calculated from the time of diagnosis of NLPHL to the time of last follow-up or death. The progression-free survival (PFS) was measured from the time of diagnosis to the time of the last follow-up, progression, or relapse or death. The Kaplan-Meier method was used for calculation of all survival endpoints. Survival comparisons were made using the log-rank test. SPSS software (IBM Corp. Released 2011. IBM SPSS Statistics for Windows, Version 20.0. Armonk, NY: IBM Corp.) was used to analyze the data.

Forty-six patients with histopathologically confirmed NLPHL formed the study group. The incidence of NLPHL increased during the study period from four patients (1998–2005) to 21 patients (2005–2010), and additional 21 patients in the most recent period (2011–2016). Figure 1 illustrates the incidence of the disease per year. With year 2007 having the highest incidence of the disease followed by 2014 (seven and six cases, respectively). The patient characteristics in our study are shown in Table 1. Median age was 26.5 years (range: 13–53 years) with 32 (70%) male patients compared to 14 (30%) female patients. The prevalence of the disease was high among patients with age group 21–40 years (63%) [Figure 2].

The incidence of the NLPHL per year 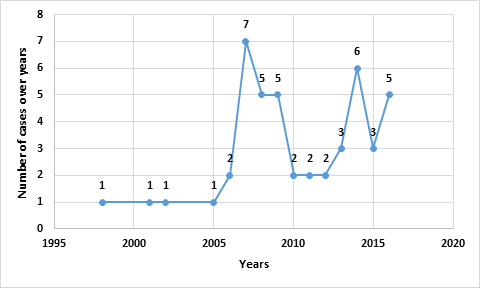 Incidence of NLPHL per age group 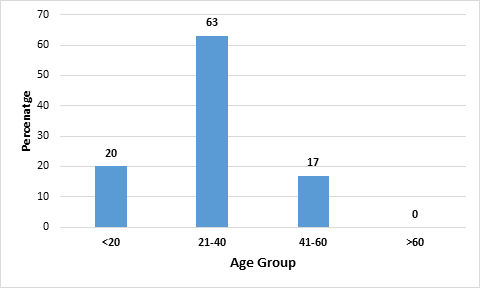 The distribution of nodal and extra nodal disease is shown in Figure 3, 83% of patients had nodal disease whereas 11% had extra-nodal disease. Figure 4 illustrates the frequency of presenting features on admission. Lymph node enlargement was the most common presenting feature, which accounted for 87% of the cases followed by scrotal swelling 7%. B symptoms was found in 6% of the cases. About 39% of patients presented in stage I of the disease followed by stage III (26%). The various treatment options are shown in Figure 5, 37% of patients were treated with adriamycin, bleomycin, vinblastine, and dacarbazine (ABVD) alone while 33% were treated with IFRT as a monotherapy. The different treatment modalities for different stages are shown in Table 2, Table 3. Radiotherapy was the most used treatment modality in early stage disease while chemotherapy was used more frequently in advance stage disease.  Chemotherapy regimen consisted of ABVD was done for a mean of three cycles (range 2–8). Expectedly, a comparison of clinical features of NLPHL patients with chemotherapy alone, radiotherapy alone and combined modalities showed that patients with stage beyond 2 were significantly more in the chemotherapy alone group (Table 4).

Incidence of NLPHL per age site of involvement 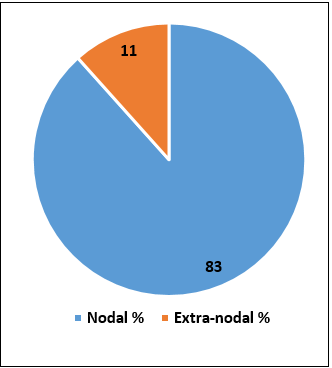 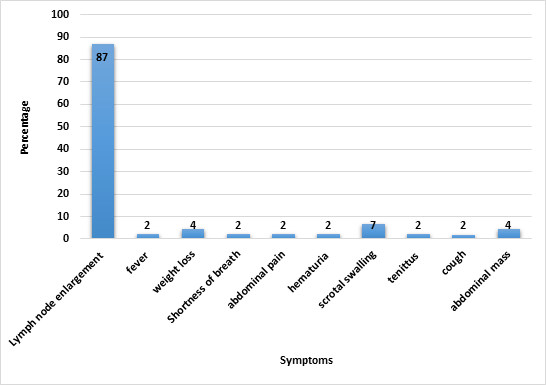 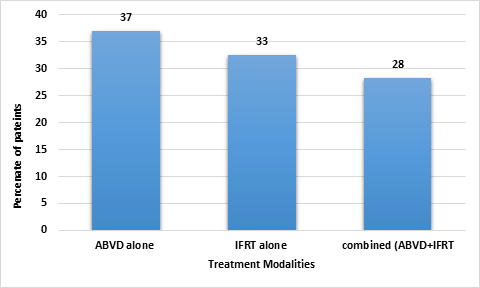 Relapse rate was 26% (n = 12) in our cohort, 50% were females and 50% were males. Most relapse was seen during the first three years of the disease (15% from the relapsed cohort), and the risk becomes negligible after 10 years of the disease [Figure 6]. Relapsed occurred in 33% of patients in unspecified disease stage followed by stage III (25%) [Figure 7]. Relapse occurred more in the group who were treated with either ABVD or IFRT as a monotherapy [Figure 8]. Most relapsed cases (33%) were treated with ASCT followed by rituximab [Figure 9]. 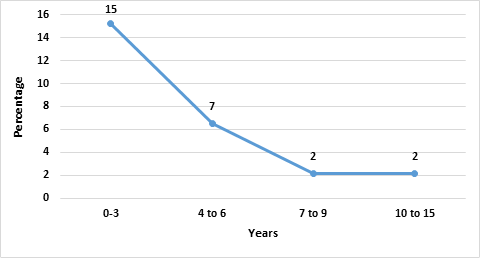 Percentage of relapse as per stage 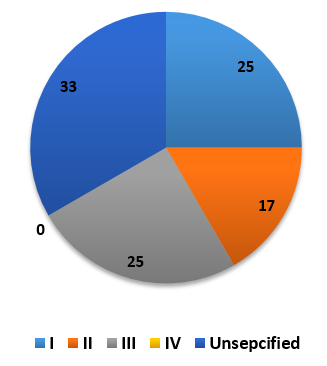 Percentage of relapsed patients as per initial treatment modality 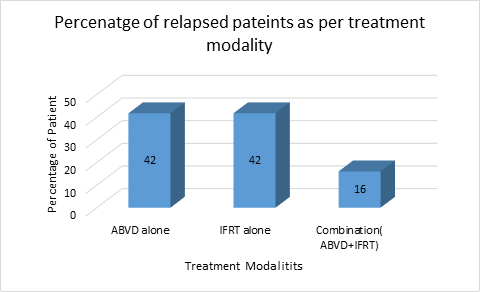 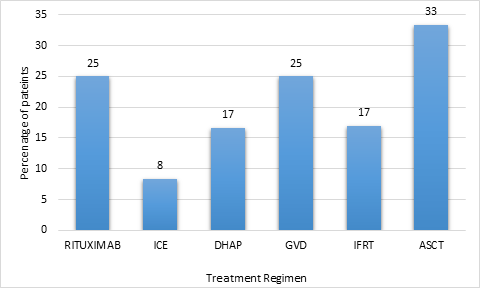 Kaplan-Meir plots show the PFS and OS [Figure 10, Figure 11]. The overall 10-year survival of patients with NLPHL is excellent reaching 96%. The five- and 10-year survival which reached 93.8% and 99.2%, respectively. Overall survival in early-stage cases was 100% and late stage cases was 96%. Death rate was 4% (2 cases) and occurred in the relapsed cases. 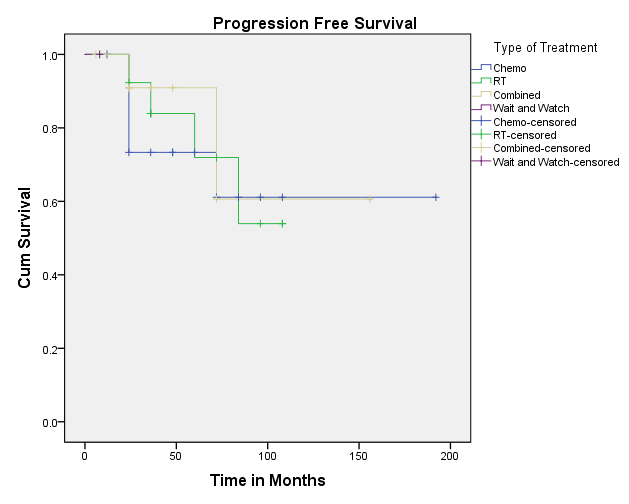 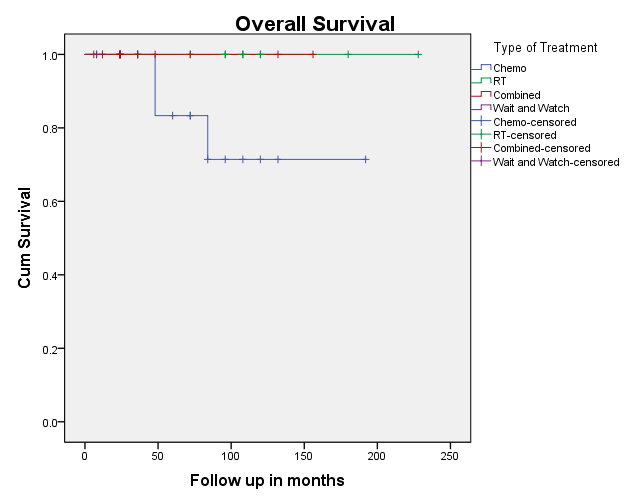 Comparison of clinical feature of NLPHL treated with Chemotherapy, Radiotherapy, and combination of Chemo and radiotherapy

In this population-based study, we described the epidemiology, clinical features, treatment, and outcome of patients with NLPHL in the Sultanate of Oman. This study showed marked increase in the incidence of NLPHL which can be explained by number of reasons. Firstly, the 1994 Revised European-American Classification of Lymphoid Neoplasms" (R.E.A.L. Classification) of NLPHL as a distinct disease entity, helped for better recognition of the disease which may have caused part of the increase. Secondly, there was a dramatic improvement in immunohistochemistry and availability of this technique in Oman, these could have contributed significantly to the rise in incidence.

NLPHL is a distinctive disease entity with different clinical features compared to classic HL. Our study confirms the male predominance in NLPHL patients and most patients presented in an early disease stage. The median age at diagnosis in our cohort was 26.5 (13–53), compared to 39 (11–79) in a study from Farrell et al.6 This can be explained partly to the fact that a round 44.15% of the Omani population are between 25–54 years of age. As with other studies, B symptoms were rare in our cohort.

Patients were treated with radiotherapy (33%), chemotherapy (37%), combined modality (28%), or careful follow-up (2%). In other studies, all these treatment modalities were also used, but with different frequencies which can reflect the fact that there is no standardized treatment regimen.7

Twelve patients (26%) in our cohort had a relapse, which is comparable to the 10% relapse rate in a study from Farrell et al.6 Relapse rate in our cohort was higher than published data from western countries.4 Of note, most relapses were seen in patients who were treated with single modality (chemotherapy or radiotherapy) regardless of disease stage. This observation has an important impact on future optimal treatment modality. However, larger studies are needed to confirm the above observation. A retrospective Canadian study have compared the outcomes of 35 early stage NLPHL patients who were treated with RT alone vs outcomes of 51 patients treated with two cycles of ABVD or combined medical treatment (CMT) (ABVD‐like chemotherapy followed by RT). It did show at 10 years, progression-free survival rates for patients treated with RT was 65%, compared to 91% in the group treated with CMT (P = 0·0024) overall survival in CMT group was almost higher than RT group, 84% vs. 93% (P = 0·074), respectively.8

NLPHL had a good overall 10-year survival of patients reaching 96% in our cohort. Two (4%) patients died during follow-up, due to relapsed NLPHL. In the study by Farrell et al.,6 the overall survival was 100% with a median follow-up of 53 months.4

This is the first study that demonstrates the demographic, clinical, and survival rate of NLPHL patients in Oman, and provides a general picture of this disease in our country. Our study confirms the male predominance in NLPHL patients. The overall 10-year survival was 96% of patients with NLPHL. This study showed higher relapse rate; therefore, further study is needed to confirm this observation. This study provides information about the natural history of NLPHL in Oman and may help to develop international joint strategies to optimize treatment strategies for patients with NLPHL.