Background: Schistosomiasis is a chronic granulomatous inflammation affecting many organs and systems of the body including the gastrointestinal tract with frequent involvement of the appendix. It presents with clinical diagnostic challenge without biopsy and histopathologic evaluation. The study aims to documents the histopathologic pattern of the appendiceal schistosomiasis in our environment.

Material and Methods: A 15-year (2004 to 2018) review of all appendix specimens received in the department of Histopahology, Aminu Kano University Teaching Hospital. Information on age, sex and duration of disease was retrieved from request cards and patient case notes. Cases with histological evidence of Schistosomiasis were selected for the study. Data presented as frequency distribution tables, charts and photomicrographs.

Results: Thirty six (36) cases of histopathologically confirmed Schistosomal appendicitis constituting 3.2% of all appendectomy specimen with male to female ratio of 9:1, and peak incidence in the third decade of life. Majority (83.3%) of cases show granuloma formation with either calcified or viable schistosoma ova or both. Only 6 cases show Minimal inflammatory response and calcified schistosoma ova. The most common presentation was recurrent and acute appendicitis.

Schistosomiasis is waterborne infestation in humans that is widely distributed and endemic in distinct geographical areas, mostly developing countries.1, 2 Causative organism is a trematode of the genus Schistosoma. Major species implicated in human diseases include Schistosoma mansoni, japonicum, mecongi, intercalatum and haematobium, all of which utilizes various species of fresh water snail as intermediate host.3 It affects more than 200 million people, majority of which are in sub sahara Africa. The incidence of schistosomiasis in Africa and other endemic areas is 0.02-6%, while in Nigeria; the reported incidence is between 0.9-4.2%.4 Schistosomiasis is considered one the neglected tropical diseases (NTD) by World Health Organization.4 It is primarily a disease of genitourinary and hepato-biliary systems; however the disease can affect other organs/systems in the body.5

Globally, Schistosomiasis of vermiform appendix is a very rare in developed countries and mostly reported in patients that had recent history of travelling to schistosomiasis endemic regions.6, 7, 8 In endemic areas appendicular Schistosomiasis is uncommon.9, 10 The aim of this review is therefore to document incidence, clinical and histopathological features of Schistosomal appendicitis in Kano, North-Western Nigeria.

This is a 15-year retrospective review of all appendix specimens received from January 2004 to December 2018 in histopathology department of Aminu Kano Teaching Hospital. All specimens were fixed in 10% formal saline embedded in paraffin wax. Microtome sections were made 4um thick and stained with Haematoxylin and Eosin. New histological slides sections were made from tissue blocks where necessary. All cases were reviewed and cases with diagnosis of schistosomiasis were selected. Clinical information including age, gender and mode of presentations were obtained from patient laboratory request cards and case notes. Cases with incomplete biodata and or clinical information and/or missing tissue blocks were excluded. Collected data was analyzed and presented as frequency distribution tables and charts, and photomicrographs.

One thousand one hundred and twenty-three cases of appendectomy specimen were received in this institution during the study period. Among these, there were thirty-six (36) cases of histologically confirmed Schistosomal appendicitis constituting 3.2% of all cases of appendiceal lesions (Figure 1). There were 32 males and four females and a male to female ratio of 9:1. The overall age ranges from 17 to 50 years with a mean age 33.5 years. The peak incidence was seen in the 20–29 years age group. Table 1 depicts age, gender and frequency of distribution of appendicular schistosomiasis. Recurrent abdominal pain dominates other clinical presentations as shown in Figure 2. Morphologically the specimen shows gross enlargement (Figure 3) and microscopic examination of majority of cases 30 (83.3%) revealed transmural infiltration of vermiform appendix by mixed inflammatory cells consisting of neutrophils, lympho-plasma cells and eosinophils. Numerous granulomas surrounding both calcified and viable schistosoma ova are seen (Figure 4). Few cases 16.7% show minimal inflammatory response with calcified schistosoma ova. 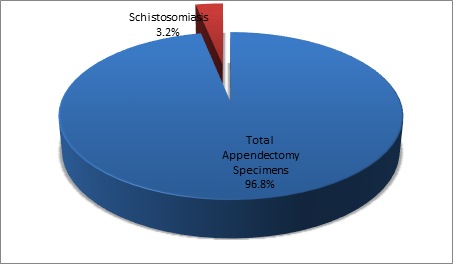 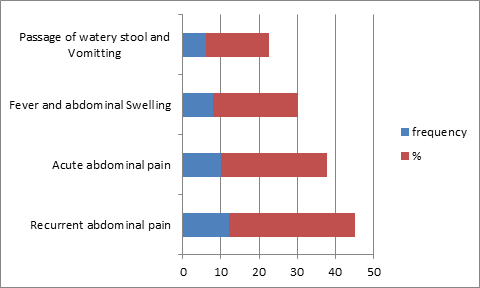 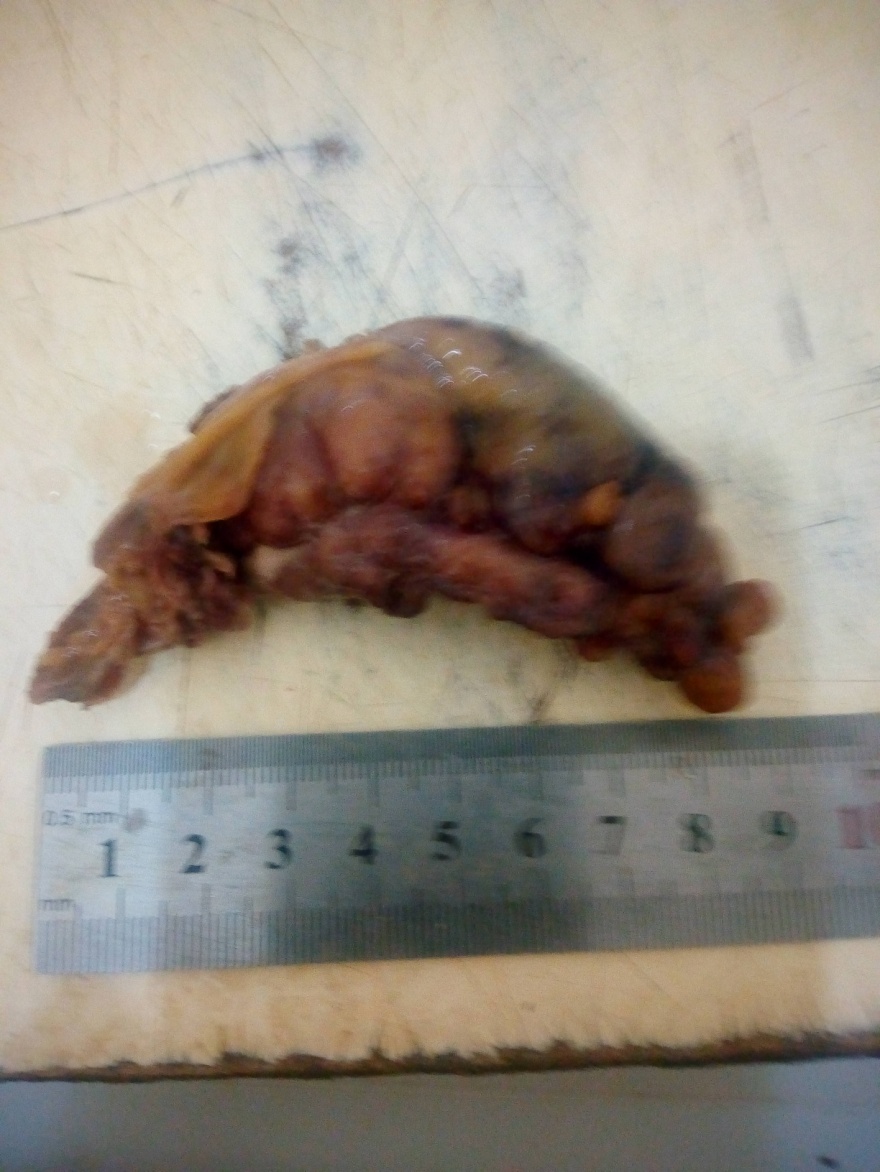 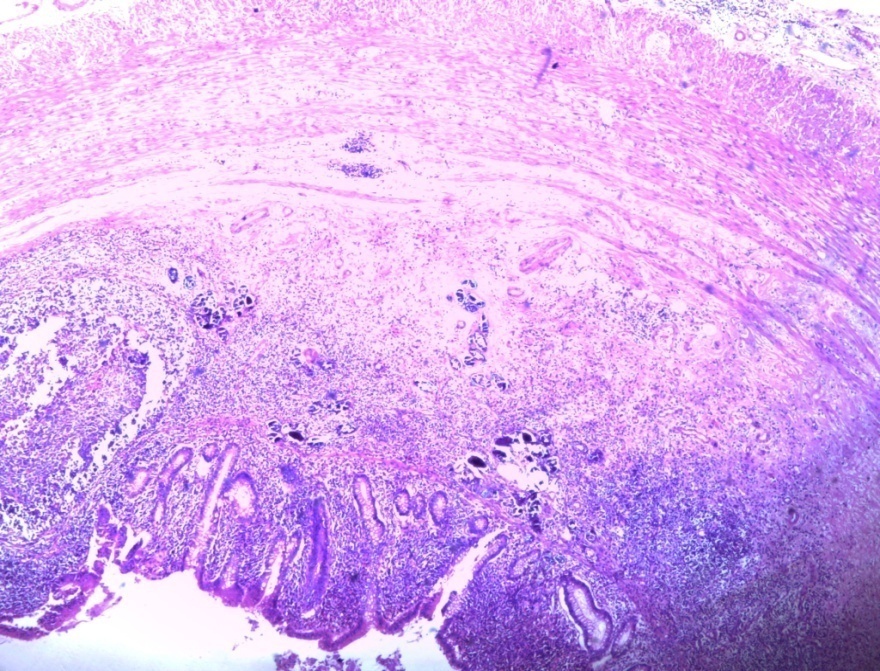 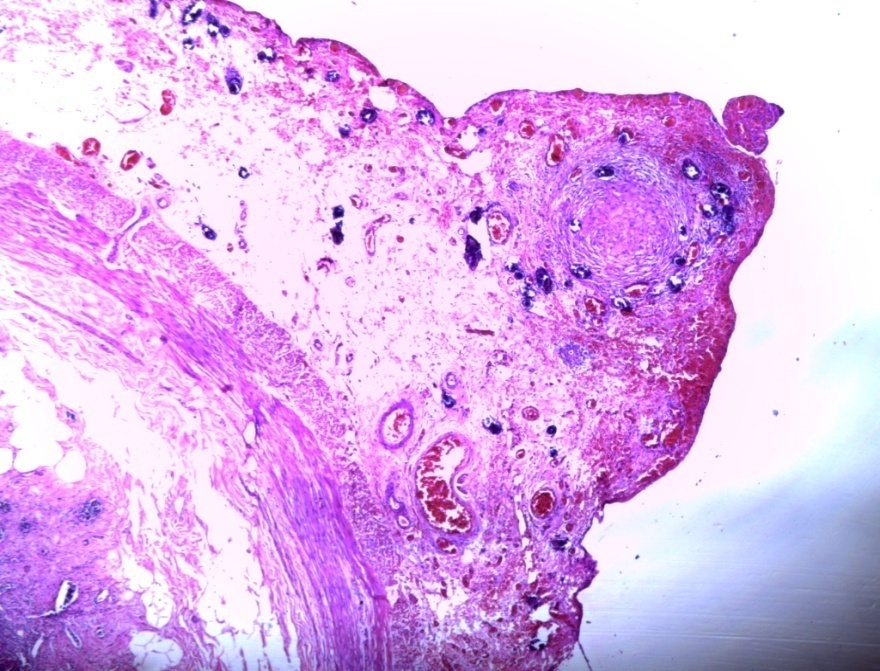 Frequency, age and gender of patients with schistosomiasis of appendix

It is estimated that at least 218 million people required preventive treatment from Schistosoma infection in 2015 with active transmission reported from 78 countries.4 Affectation of vermiform appendix was first reported in 1909, following which there were a number of reports emphasizing the rarerity of this disease entity and the need for prevention.8 This slight rise in incidence of this disease has been attributed to increase in health care awareness and utilization of histopathological services.10

An incidence of appendicular Schistosomiasis of 3.2% (Figure 1) was recorded in this study which is higher than 2.8% previously reported by Edino et al.11 in the same centre over a decade ago; this may be due to population growth and increase utilization of histopathological services in the index population. The reported incidence is slightly higher than 2.3%, 2.1% and 2.4% obtained from studies in Maiduguri, Zaria and Ibadan respectively.12, 13, 14 But lower than 4.2% in Ife South Western Nigeria.9 In non endemic regions much lower incidence was reported by a number of investigators.6, 15

Male to female ratio was 9:1 which is not unexpected considering that the population in Kano is largely agrarian, and agriculture is a male dominant occupation. Similar finding was reported in previous series.8, 9, 12, 13, 14 Although, the peak incidence in this study is in the third decade, majority of cases are in second and third decade. This is in keeping with reports in other centres in the country.13, 16, 17

Most patients in this study presented clinically with abdorminal pain and other constitutional symptoms and non had preoperative diagnosis of schistosomiasis, a finding similar to what is available in the literature.12, 13 This explain the need for histological diagnosis of all appendectomy specimens to enable specific therapy. However, stool microscopic examinations is an important simple non invasive diagnostic tool in this regards; hence avoidance of unnecessary surgical trauma, since without any complication drug therapy is very effective in eradicating the parasite.

This study establishes the incidence of schistosomal appendicitis in our settings and also emphasizes the need for high index of suspicions in all cases of recurrent abdominal pains, in addition to health education on proper hygiene and avoidance of exposure to fresh water especially by the children and young adult. This will reduce the attending morbidity and occasional complications following surgery. However, surgery and histological examination and diagnosis are necessary in cases not responding to medical therapy of all suspected appendicular lesions, since confirmation of appendiceal schistosomiasis requires thorough histopathological examination by sampling of the entire appendix, this is due to lack of pathognomomic clinical or operative findings in this disease.18