Introduction: Lung cancer is one of the most common causes of cancer related mortality. Various methods for cytological diagnosis like fine needle aspiration (FNA) along with exfoliative cytology by bronchial brushings play a pivotal role in the diagnosis as well as categorization of Non small cell lung carcinoma (NSCLC); especially in advanced stages and cases where biopsy may not be feasible.

Aims & Objectives: The aim of the study was diagnosis and subclassification of Non small cell lung carcinoma (NSCLC) from cytosmears of bronchial brushings and Fine needle aspiration cytology (FNAC) samples followed by histopathological and clinicopathological correlation.

Materials and Methods: The present study is both prospective & retrospective study done in Department of Pathology for a period of 2 years (September 2018- September 2020). A total of 46 cases were included in the study group. Categorization of lung cancer was done based upon the 2015 World Health Organization (WHO) criteria of cytodiagnosis. Histological correlation was done wherever available. Correlation with clinicopathological parameters was also done.

Conclusion: Cytological techniques are safer, economical and provide quick results. But a comprehensive clinicopathological approach is needed for labelling a correct diagnosis.

Carcinoma of lung is the most common cancer worldwide and also the most common cause of cancer related mortality in developed countries with increasing incidence in developing countries.1 It is more common in males than females but this trend is decreasing nowadays.2 The most common age range is 40-70 years with peak incidence in 50-60 years. Only few cases present before the age of 40 yrs.3 Annually it accounts for 1-5million deaths worldwide and 2.5 million deaths in developing countries.4 The overall 5 year survival rate is approximately 15% in developed countries and 5% in developing countries.5 Every year approximately 63,000 new cases are reported in India.6 There has been significant rise in the incidencein metropolitan cities of India due to industrial hazards and air pollution.7 The incidence and types of lung cancer differ according to geographic region and ethnicity.

Etiology of lung cancer is multifactorial. The foremost and leading cause is tobacco smoking.

It also reflects the prevalence and pattern of smoking.8 80% of lung cancer occurs in active smokers or who have recently stopped smoking. Passive smoking increases risk of cancer twice than non-smokers. Others factors are industrial hazards, air pollution and genetics involving mutation of Tp53, EGFR, RB and KRAS genes.9

More than 70 percent cases of lung cancer present clinically in advanced stage and are unresectable. Only small biopsy and cytology samples are available for diagnosis and further management.4 Various methods for harvesting small biopsies and cytology samples are fine needle aspiration cytology, bronchial brush cytology, bronchiloalveolar lavage fluid, sputum analysis, effusion fluid analysis with or without cell blocks along with small needle biopsies.4, 10 These methods are cheap & less traumatic with decrease risk of haemorrhage allowing rapid on site evaluation and more so the procedures can be done multiple times if sample is not adequate.

This was both prospective and retrospective study conducted in the Department of Pathology, Kalinga Institute of Medical Sciences (KIMS), Bhubaneswar, Odisha over a period of 2 years from September 2018 to September 2020. This was approved by institutional ethics committee (IEC). Informed consent before the procedure and staining was taken from all the patients.

All cases were selected as per radiological and cytological evidence of malignancy. Bronchial brush cytosmears& TBNA smears from Department of Pulmonary Medicine and cytosmears done by CT guided TTNA from Department of Radiodiagnosis were obtained. Bronchial brush smears were obtained with help of Olympus Fibreoptic flexible bronchoscope after sedation of the patient. With the inbuilt brush in the bronchoscope, the Pulmonologist took samples from the surface of tumor sites or from suspicious areas of mucosa from desired segment of bronchi. This brush was subsequently rubbed on uncoated glass slides to prepare smears. Then smears were immediately fixed in 95% alcohol for two minutes in coplin jars and the same were sent to the Department of Pathology, KIMS, Bhubaneswar. CT guided TTNA samples were obtained using 20 Gauge needle attached to 10ml syringe holder. These smears were also fixed in 95% alcohol. All the smears (bronchial brushings, TBNA & TTNA)were stained with Hematoxylin & Eosin(H & E)and Papanicolaou (PAP) stains followed by DPX mounting.CT guided core needle biopsy samples were obtained using 20 gauge automated cutting biopsy needle. The needle biopsy samples were received in 10% buffered formalin. These formalin fixed samples were processed by automated tissue processor for 16 hours. Paraffin embedded tissue blocks were made. 3 to 4 micrometer thick sections were taken by Leica microtome. The histopathology slides were stained with H&E. These cases were correlated with cytological diagnosis wherever possible. Cytodiagnosis was done based on 2015 WHO classification of lung tumors in small biopsy and cytology samples.11 All the cases were correlated with clinicoradiological parameters.

Certain cytomorphological clues point toward broadly categorizing lung carcinoma into NSCLC or SCLC. In SCLC the cells have high nucleocytoplasmic ratio with nuclear molding showing salt and pepper chromatin with inconspicuous nucleoli and scant delicate cytoplasm. Crushing artifacts and apoptotic bodies are also seen.12, 13 In NSCLC- favouring SCC, the cells are polygonal to spindloid having orangeophilic cytoplasm with distinct cell borders, intercellular bridges and hyperchromatic nuclei.12, 13 In NSCLC- favouring ADC, cells are round to oval arranged in 3-dimensional clusters, glandular patter and some showing papillary fragments. Cells show indistinct cell borders, intracytoplasmic mucin with vesicular opened up chromatin showing prominent nucleoli.14, 15, 16, 17 In ADC lepidic pattern the tumor cells are arranged in balls with absence of nuclear moulding and papillary pattern of arrangement. The cells may have cytoplasmic microvilli along with vacuolation and round to oval nuclei having granular chromatin and inconspicuous nucleoli.11

Distribution of cases according to age range (N=46)

Distribution of cases according to gender (N=46)

Distribution of cases according to smoking status (N=46)

Distribution of cases according to cytological procedures (N=46)

Distribution according to cytomorphological diagnosis (N=46)

Comparison of cytomorphological diagnosis with other studies (N=46) 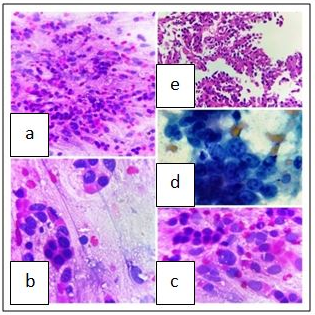 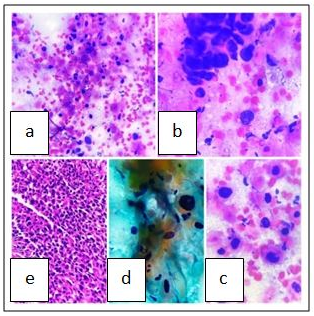 Lung cancer poses a great diagnostic and therapeutic problem worldwide. It is the most common cause of cancer related morality in developed countries with an increasing trend in developing countries.1 Previously lung cancer was broadly divided into SCLC and NSCLC. With introduction of newer personalized treatment modalities, targeted therapies & molecular analysis, new WHO classification of lung cancer was introduced in 2015 which took into consideration of small biopsy and cytology samples.11 Presently according to WHO 2015 classification of lung cancer, it has become important for subtyping of NSCLC lung into ADC, SCC, LCC, NSCLC-NOS & others.10 This new updated classification gave better understanding of tumors and created a good harmony between pathologist and clinician by avoiding confusing terminologies.11 Also it has benefited patients to receive therapy with lower side effects, higher therapeutic response and gives further knowledge of mutational analysis (EGFR mutation and ALK rearrangement).9 Many older entities were removed and newer ones were introduced.

Nowadays studies are more focused on specific diagnosis based on cytology rather than histology as most of the cases present in advanced stages and only small biopsy and cytology samples are available for examination. With less manipulation, more material is preserved for molecular testing with higher efficacy in cytology. Cytomorphologically with routine stains like H&E and Pap, many of the cases have been diagnosed correctly and also correlated with clinicoradiological findings. The chromatin and DNA preservation is better in cytology than histology which also helps in different molecular diagnostic methods of study.18

A clear distinction between NSCLC and SCLC is important as bears treatment implications. Sometimes in cytosmear analysis of lung malignancies, sampling bias and tumor heterogeneity becomes the cause for misdiagnosis of ADC as SCC. This may be due lack of recognition of keratinised cells. The artifactual vacoulisation, pseudoacinar structure, poor staining or smearing technique error and tumor necrosis also poses to erroneous diagnosis. Poorly differentiated carcinoma with pleomorphic cells in sheets and necrotic background also implies inability to subtype NSCLC.Radiological correlation also gives clue to the diagnoses of lung malignancy. It is important to know the relationship between the radiological location and subtypes of NSCLC, as subtyping is important for the new modality of treatment.

Out of 46 cases, most common cases were ADC comprising of 16 cases (34.78%). The most common age group for ADC was 61-70 years, with male to female ratio is 1.6: 1.0. This was similar to the study done by Atta I S et al.,26 and Alekhya et al.27 ADC was common in peripheral location with involvement of right upper lobe in our study which was concordant with study by Rawat et al.27 and data followed by WHO lung cancer 2015 statistics.11

In our study correlation between cytology and histomorphology was possible in 25 cases. Concordance was present in 17 cases (68%). Detailed analysis shows the diagnostic accuracy of cytology for classification of NSCLC was 89.47% (17/19) in our study. (Table 10)

Early diagnosis of lung cancer plays a pivotal role in reducing the death rate. Cytology can play an excellent role in initial evaluation of lung cancer by giving an early diagnosis. Subclassification of NSCLC can be difficult in some cases on cytomorphology alone. Further ancillary investigations like Immunocytochemistry in cytology samples and Immunohistochemistry on cell block and biopsy samples can be useful in categorization of lung cancer in core biopsy or cytology samples.

Limitation of Our Study

In our study, there was crushing atrefacts along with obscuring factors like haemorrhage and necrosis for which we had to reject 11 cases. In some cases we had discordant results in cyto-histo correlation, which may be due to sampling site error during procedures. Sometimes if samples are collected from solid areas of ADC, these cases may be misdiagnosed as SCC cytologically, which we faced in 2 cases which were given as NSCLC-ADC in cytology came out to be SCC histologically. In these cases ICC plays an important role for conclusive opinion. So, further prospective study with larger sample size along with other molecular markers is necessary to validate our approach.

The researchers did not receive any grant from outside funding agencies. This was a self funding study.

This study was conducted with approval from the clinical department and as per the approval of Institutional Ethics committee. Informed consent was taken from all the patients before the tests and procedures.

The authors declare that they have no conflict of interest.

IS Atta Thyroid transcription factor-1, Napsin-A, and p63 expression in small cell carcinoma versus adenocarcinoma of the lungEgypt J Pathol20153518794

AV Zyl PT Schubert CFN Koegelenberg The utility of TTF-1, napsin A, CK5 and p63 staining in the sub-classification of non-small cell carcinoma of the lungCytopathology201930658691