Background: The survival rates of GBM patients have shown improvement. This increases the likelihood of manifesting radiation induced sequelae such as neurocognitive dysfunction, alopecia, and memory loss. This increases the focus on dosimetry of hippocampus, scalp, and normal brain. The present study was designed to compare the dosimetric efficacy of two conformal techniques in terms of OAR’s sparing and PTV coverage.

Materials and Methods: A total of 10 patients with GBM who had received radical radiotherapy by 3DCRT technique were selected. A corresponding IMRT plan was generated for study purpose (n=20 plans). The dose prescribed to the PTV was 60 Gy in 30 fractions. Other than critical structures, additional delineation of hippocampus, normal brain and skin was done. The dosimetric parameters of PTV and OAR’s were compared amongst the two techniques.

Conclusion: The better coverage with IMRT technique was particularly observed in cases where PTV was overlapping with critical OAR’S while in rest of the cases coverage was comparable amongst both the techniques. The better sparing of scalp and normal brain may decrease the incidence of alopecia, neurocognitive dysfunction that needs to be clinically validated in future studies.

There has been an improvement in survival of Glioblastoma multiforme (GBM) patients due to emerging novel approaches like targeted therapy, immunotherapy and tumor treating fields.1, 2 Recent meta-analysis suggests that the two and three year survival rates for GBM patients have nearly doubled in the past 15 years.3 This raises the concern about treatment induced toxicity. Moreover, these toxicities may add to the burden of disease itself in terms of distress and psychiatric manifestations. The importance of Organs at risk (OAR’s) like brainstem, optic chiasma, optic nerves, and eyes are well established but structures like scalp, hippocampus and normal brain are not routinely considered in radiotherapy planning. They have proven association with alopecia, neurocognitive dysfunction, and memory loss and that can have a profound impact on the patient’s quality of life.4, 5, 6 This raises the importance of taking into account these structures as additional OAR’s in radiation planning along with other routine serial structures.

The present study was designed to compare the feasibility of preventing alopecia and neurocognitive dysfunction in GBM patients by dosimetric analysis in 3 Dimensional Conformal radiotherapy (3DCRT) and Intensity Modulated Radiotherapy (IMRT) technique.

Ten patients of GBM were selected who received radical radiotherapy by 3DCRT technique. Patients in which the post-operative bed or residual tumor was in close proximity to critical serial structures were not included. For each patient, a corresponding IMRT plan was generated where the OAR’s and dose constraints were same as for 3DCRT planning.

Additional delineation of scalp, normal brain, hippocampus was done for dosimetric analysis. The scalp was delineated as outermost 3mm thickness from the outline of body. The normal brain was defined as the part of the brain lying outside the PTV. For Hippocampus, a 5mm expansion was taken for Hippocampal Avoidance Zone (HAZ).

The routine OAR’s (brainstem, optic chiasma, optic nerves) had an expansion of 3 mm for defining the Planning Risk Volumes (PRV).

A dose of 60 Gy in 30 fractions was prescribed to the planning target volume (PTV). The aim of planning was to achieve dose to the PTV between 95 to 107% relative to the prescribed dose.

The dose constraints for OAR’s were prescribed as per EORTC recommendations.7

The additional OAR’s were not prescribed dose constraints. The incidental dose being delivered by 3DCRT and IMRT technique was analysed and compared.

A three beam arrangement was used with a photon energy of 6 MV. The beam orientation, weightage and angles of beams were so chosen to minimize the entry dose through normal brain. The plans were optimized using field in field technique, enhanced dynamic wedges.

A total of 5 to 6 beams coplanar beams were used. Inverse planning was done and tissue inhomogeneities were considered in the beam optimization process using a progressive resolution optimizer (PRO) algorithm. The calculation was carried out by the analytical anisotropic algorithm (AAA). The maximum iteration limit was 1000 and the iteration time given was 1000 s. The plans were calculated using dynamic Multileaf collimator (MLC) and jaw tracking tools. No constraints were given for the scalp, brain, hippocampus and HAZ in the optimization process.

Dose color wash and Dose Volume Histograms were analyzed and compared amongst the two techniques for PTV and OAR’s.

To compare baseline and outcomes for skewed parameters, Wilcoxon Signed Ranks Test was used and for normally distributed data, paired t test was used. A p value of <0.05 was considered statistically significant.

The comparison of dose volume parameters regarding PTV has been shown in Table 1.

The comparison of dosimetric parameters of OAR’s is shown in Table 2. The Dmax of PRV brainstem was almost similar in both the radiotherapy technqiues whereas Dmax of PRV chiasma was significantly lower in IMRT technique. The dose to ipsilateral HAZ in terms of Dmean, Dmax and V20 was significantly lesser in 3DCRT technique while for the contralateral HAZ, there was no statistically significant change. There was no significant change in dosimetric parameters of both eyes, lens, optic nerves and cochleas. 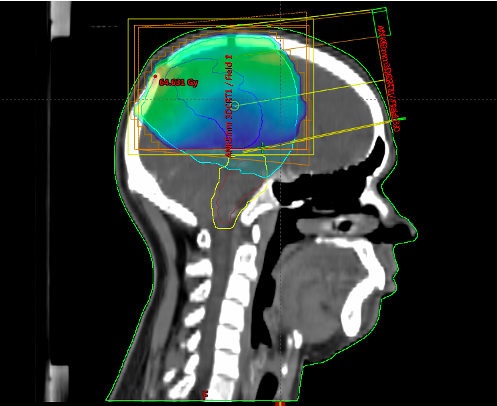 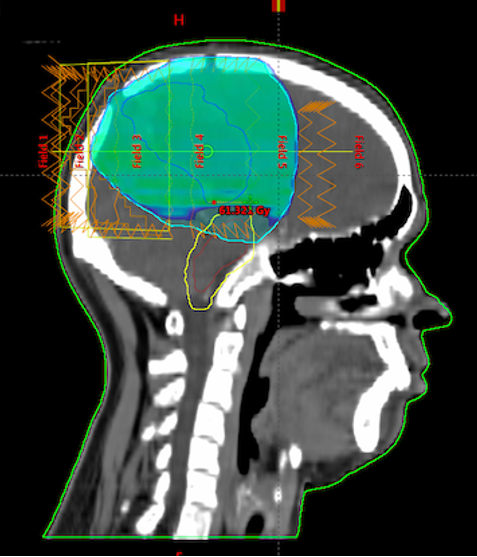 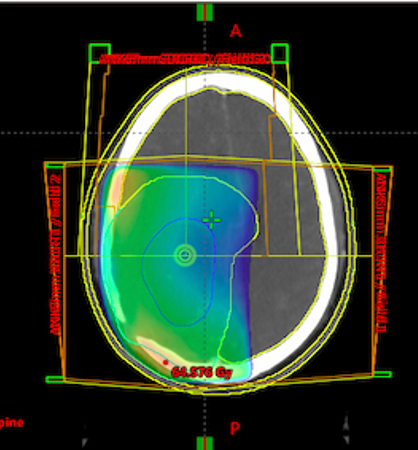 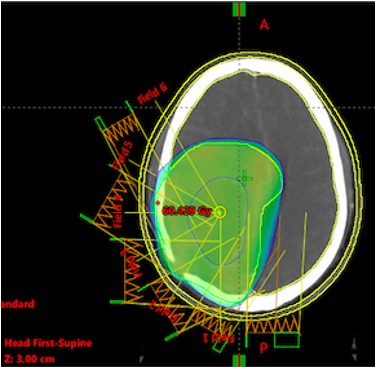 The findings of present study favored IMRT in terms of dose coverage of the PTV and sparing of normal brain, skin and contralateral hippocampus. The shortcomings of 3DCRT technique were huge dose deposition along the beam entry path exposing OAR’s to high doses. Comparatively, in IMRT technique the sharp dose gradient largely reduced the exposure beyond PTV.

The study demonstrated significant advantage in PTV coverage with IMRT technique but in patients where PTV was not overlapping with critical structures, the coverage with both the techniques was nearly comparable. Also, the D50 that is an important predictor of target volume coverage failed to elicit any significant advantage with IMRT technique along with the mean dose. Thus, the advantage of IMRT in terms of PTV coverage was not uniform amongst all the patients. Although, we excluded the patients with tumor or post-operative bed in proximity with critical structures to avoid bias in favor of IMRT technique but a margin of 2 cms for the CTV led to inclusion of small volumes of critical OAR’s in the PTV.

Radiation induced hippocampal damage has a strong association with cognitive decline, memory dysfunction, and processing spatial information. This demands jurisdiction of the planning practices to provide its maximal possible avoidance.

Although significant difference could not be demonstrated in dosimetry of contralateral HAZ amongst 3DCRT and IMRT technique but the mean doses and V20 of Contralateral HAZ demonstrated somewhat better sparing with IMRT technique. Unlike normal brain and scalp, significant sparing could not be obtained as a very small volume of HAZ had huge impact of entry dose. This possibly demands exploitation of the beam optimization property of IMRT technique and utilization of non-coplanar beams avoiding entry dose. This was proved in a study by Soydemir GP et al. where hippocampal sparing was significantly improved with optimized IMRT plans compared to standard IMRT plans.9

The sparing of normal brain at medium and high doses was tremendous despite a single light weighted beam traversing through contralateral brain in 3DCRT plans compared to multiple beams in IMRT plans. Although, in 3DCRT plans we optimized the angle and weightage of beams in 3DCRT plans to minimize normal brain dose but in IMRT plans it was not intruded in beam optimization process. The reason for better sparing is the conformity of IMRT plans masked the impact of increased entry dose through multibeam arrangement. Radiation induced irreversible delayed brain injury is known to occur six months after radiation leading to white matter necrosis, vascular abnormalities, permanent demyelination, gliosis manifesting as neurocognitive sequelae.10 With advancements in radiotherapy techniques and incorporation of newer targeted therapy in the management of GBM patients, the survivals are increasing. Therefore, a large proportion of the patients are likely to manifest this sequelae and the recognition of IMRT technique becomes a key consideration. Recent meta-analysis suggests improvement of two and three year survival rates to 18% and 11% respectively.1 Radiation induced neurocognitive dysfunction is a major challenge for these surviving patients.

A study by Lawrence Y R et al. analyzed acute and late > grade 3 neurological toxicities in a total of 2761 patients receiving chemoradiation that were recruited in 14 RTOG trials. The vast majority of the patients that is 86% had GBM. Remarkably, the acute neurological toxicities following radiation significantly predicted for occurrence of late toxicities and poorer overall survival, independent of recursive partitioning analysis class.11 Given the impact of neurocognitive decline on survival outcomes and its enormous burden on quality of life for surviving patients, the dosimetry of normal brain is crucial.

The IMRT technique also led to significant benefit in terms of scalp sparing. The V20 and V40 have been proved to be strong predictors of acute and chronic radiation induced alopecia respectively.7 Both the parameters were significantly lesser in IMRT technique. Persistent alopecia after six months of radiation affects approximately 60% of patients. Patchy alopecia is the most commonly observed pattern following radiation.12 It leads to huge cosmetic disfigurement.

Alopecia adversely affects psychological functioning manifesting as anxiety and depression, diminution of sense of well-being, self and identity. It has been described as one of the most distressing adverse events of cancer therapy and available treatment options have limited efficacy.13 This makes it a key concern in radiation planning in the dosimetric parameters of scalp have significantly lower radiation doses by IMRT technique which clearly emphasizes the advantage of IMRT over 3DCRT technique. These dosimetric parameters are the computer generated data which needs clinical validation in terms of prevention of alopecia.

A dosimetric study by Mac Donald S et al. and Lorentini et al. also validated the findings of our study with significant improvement in target coverage and normal brain sparing with IMRT technique over 3DCRT technique.14, 15

Our study proved a significant sparing of skin and normal brain with IMRT technique despite the fact that they were not accounted in the beam optimization process. This highlights that the volume of these OAR’s outside the PTV are itself accounted as avoidance structures by IMRT technique. This advantage of decreasing the dose to scalp, brain and hippocampus may be further enhanced by optimization.

The present study with existing literature supports the dosimetric superiority of IMRT technique for OAR’s – brain, hippocampus, and scalp which are not routinely considered in radiation planning. This needs to be clinically validated in future studies with a larger sample size.

3DCRT has been considered the standard technique for GBM. With increasing survivals of GBM, the psychosocial factor of alopecia and neurocognitive dysfunction needs consideration. The present study demonstrates that IMRT technique has the potential for significantly better sparing of normal brain, scalp and possible hippocampal avoidance.