Background: Breast cancer is a heterogeneous disease with different biological and histological properties due to genetics and epigenetic changes with varying clinical features and treatment responses. This study was planned and carried out with the objective to classify breast cancers molecularly using surrogate markers, ER, PgR, Her2/neu and Ki67 and correlate the various types with conventional prognostic markers.

Materials and Methods: 70 cases of invasive breast carcinomas were subjected to routine staining and immunohistochemistry with estrogen receptors(ER), progesterone receptors (PgR), Her2/neu and Ki67and classified into molecular subtypes as defined in various studies. These were correlated with other conventional prognostic parameters and analyzed statistically.

Result: 70 cases of invasive breast cancer were classified into 18(22%) cases of luminal B, 16(25%) cases of Her2/neu and triple negative each and 14(22%) cases of luminal A subtypes. There was an even distribution of molecular subtypes varying from 22 to 28%. Luminal B and Her subtype were commoner in the Indian setting as compare to other studies. Luminal A and Luminal B subtypes were commoner in patients older than 50 years. Her2/neu and TNBC cases were more commonly of higher histological grade and pathological stage, while Luminal A and B subtypes showed lower grade and stages. Luminal B subtype and Her2/neu subtypes showed DCIS more often and Luminal B and TNBC subtypes, more frequent lymph node metastasis.

Conclusion: The molecular classification of breast cancer by IHC in this study population showed an almost equal distribution of the 4 subtypes. The association of tumor grade and LVI with the molecular subtypes showed a significant correlation.

Breast cancer is a commonest and leading cause of deaths in women due to cancer, with more than 10,00,000 cases diagnosed worldwide annually.1 According to the WHO there are 7.6 million deaths worldwide due to cancer every year, out of which 502,000 are caused by breast cancer alone. During the past two decades the mortality rate has decreased significantly due to early detection of disease and the use of aggressive multimodality treatment, including targeted therapy.

Prognostic information is important in determining the likely outcome of the disease and planning further management. Apart from clinical parameters like age, menopausal status and disease presentation, important prognostic indicators in histopathology are tumour size, histologic type, histologic grade and pathological stage. In addition, there are other factors which are not only prognostic but also predictive of response to therapy.2 Some of these factors includes ER, PgR, HER2/neu and Ki67.

Recently according to the 2011 St. Gallen consensus, molecular subtypes of breast cancer have been classified into Luminal A (ER+/PgR+/HER2-/low Ki67), Luminal B (ER+/PgR+/HER2-/+/high Ki 67), HER2 overexpression (ER-/PgR-/HER2+) and triple negative breast cancer/TNBCS (ER-/PgR-/HER2-). One additional subtype, Basal like, refers to TNBCs that are positive for basal markers (CK5/6).6

Today, the immunohistochemical demonstration of ER, PgR and HER2/neu on core biopsies is standardized through well-established protocols.7 There is a need to classify breast cancer based on IHC expression of these surrogate molecular markers and understand the biological significance and relate these to the existing classification and prognostic parameters in the Indian context. This study will thus attempt to establish the relevance of molecular classification in this region.

A cross sectional prospective and retrospective study was conducted of 70 cases with carcinoma breast diagnosed in the Department of Pathology of Bharati Vidyapeeth Deemed to be University Medical College and Hospital, Pune, from August 2016 to July 2019. Cases who had received preoperative chemotherapy or radiotherapy for breast cancer and the cases who came with recurrence were excluded from the study.

Lumpectomy and mastectomy specimens received were adequately fixed in 10% buffered formalin for 12 – 24 hours. Representative tissue sections were processed, and micro sections were stained with hematoxylin and eosin (H & E) as per standard protocol. Each case was classified as per WHO 2012 Classification of Breast Tumors. Additionally tumors were evaluated for grade using the Modified Scarff Bloom Richardson system, presence of lymph node metastasis and lymphovascular invasion(LVI) were recorded.

Microsections were subjected to immunohistochemistry (IHC) using antibodies to estrogen receptor(ER), progesterone receptor (PgR), HER2/Neu and Ki67. The scoring of ER, PR, HER2/Neu staining in the positive cases was done as per American society of Clinical Oncology and the College of American pathologist (ASCO/CAP) guidelines using Allred scoring system. The Allred score is the sum of proportion (proportion of stained nuclei of cells) and the intensity score (intensity of stained nuclei). Positive interpretation requires at least 1% of tumor cells showing positive nuclear staining of any intensity.

Each case was then classified as per the Molecular classification of breast cancer. The molecular subtypes were correlated with histological types and all other demographic and prognostic parameters recorded earlier.

Molecular classification: Comparison with other studies

Molecular classification: Comparison with result of other countries 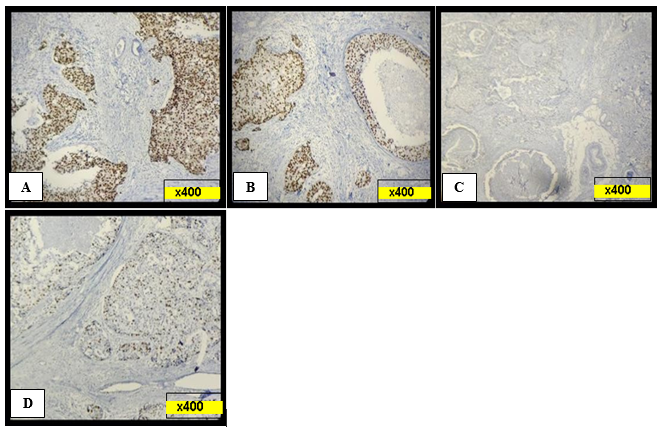 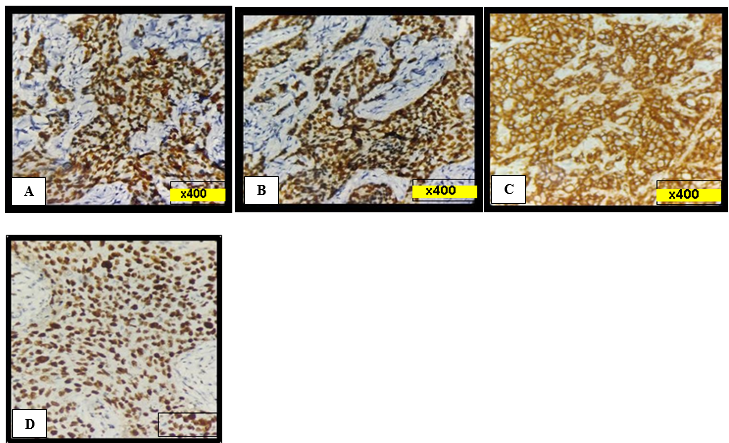 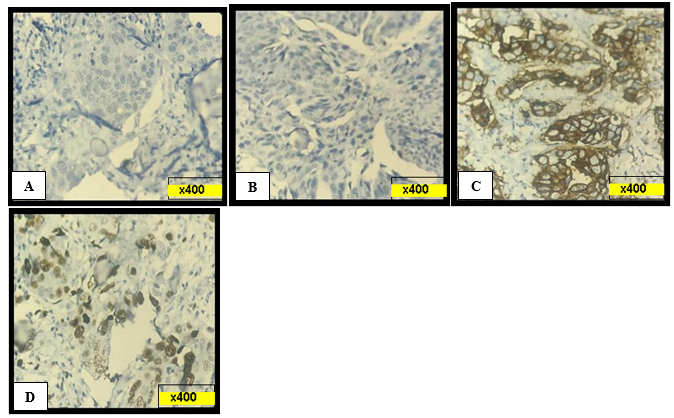 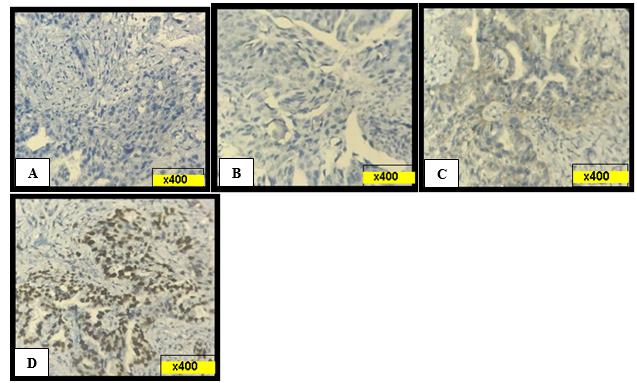 Carcinoma of breast is a commonly occurring cancer in clinical practice and is one of the leading causes of death in women due to cancer. The mortality due to cancer has significantly decreased in recent decades. Carcinoma of breast is now considered a heterogeneous disease and is comprised of different biological entities. These entities show many distinct clinical and pathological characteristics of which the more important ones are hormonal receptor status and histological grades. These entities have been shown to exhibit distinct behavioral patterns and different treatment strategies have evolved for this.

The St. Gallen consensus 2011, has brought out a molecular sub classification of breast cancer based on exhibition of ER, PgR, HER2/Neu and Ki67 markers and this sub classification would further enhance the therapeutic decision making. The conventional prognostic and predictive markers have been well discussed in literature in which the important ones include tumour stage, histological grade, immunohistochemical markers such as ER, PgR, Her2/Neu and Ki67 in addition to other pathological features.6

The present study comprised of 70 cases of carcinoma of breast diagnosed at the Department of Pathology of this institution. Molecular classification was carried out using the recent St. Gallen consensus 2011criteria, and the results of this study were compared with other studies as shown in Table 3.

In all the studies it was noted that most of the tumours were >2 cm in size and largest number were seen in >2-5 cm group. These findings were comparable with the studies of Shukla et al.16 and Walke et al.10

The histological grade was compared with molecular subtypes and it was observed that the majority of cases of luminal A and luminal B subtypes[14/14(100%) and 16/18 (88%)] were histological grade I and II. Similarly, the majority of cases of HER2/neu and TNBC subtypes i.e 14/16(87%) and 16/16 (100%) were histological grade II and grade III, suggesting the tumour aggressiveness of these two molecular subtypes. Findings of this study were comparable with that of Shukla et al.16 61% of the cases of Luminal A subtype was in grade I category, 51% of the cases of luminal B were in grade II category, while 46% Her2/Neu and 31% of TNCs were in grade III category. However Setyawati et al. have found that all molecular subtypes were predominantly of grade III suggesting that the diagnosis of breast cancer in this Indonesian study was delayed.6

Lymphovascular invasion was seen in 47% of the cases in this study of which 44% were of triple negative subtype. Liao et al. has suggested that Luminal A subtype has small tumour size, less LVI and more lymph node involvement was seen in luminal B and other subtypes.17

The limitations of this study were the nonavailability of FISH to clarify on status of HER2/Neu equivocal (score 2+) cases. Also when distributed in groups the number of cases were small and hampered assessment of statistical significance. Non inclusion of CK 5/6 in the scope of this study did not permit complete molecular classification into basal and non basal subtypes. It is also mentioned in the literature that a discrepancy of upto 39% exists between molecular classification by IHC and by gene expression.

The molecular classification of breast cancer by IHC in this study population showed an almost equal distribution of the 4 subtypes. The association of tumour grade with the molecular subtype was statistically significant with majority of Luminal A and B subtypes seen in grades I and II, while majority of HER2/Neu and TNBC subtypes in grade II and III. Most of the breast cancers in this study were >2 cm in dimension suggesting a need to proactively screen for the early diagnosis. There is also a need to study the relationship of molecular subtypes with risk factors in a large population across the country in multiple region.