Context: Liver disorders occupy a noteworthy proportion amongst the aetiologies for childhood morbidities and mortalities. They have characteristic histological features whose timely reporting can abet the further management and overall prognosis of the conditions.

Materials and Methods: A retrospective and prospective observational study of liver specimens of children, satisfying the inclusion and exclusion criterias, sent to Pathology department, BVDUMC, Pune over a span of 48 months.

Results: Total 34 cases were studied of which 31 were liver biopsies and 03 were resections. Most common age group was between one month to two years. Male to female ratio was 1.6:1. Most common clinical feature was icterus, LFT was deranged in 79.41% cases. Most common histopathology amongst non neoplastic cases was cholestasis and amongst neoplasms was Hepatoblastoma. Histopathology and radiology impression correlated in 94.12% cases. Bile duct proliferation, presence of intracanalicular bile plugs, portal tract fibrosis, presence of extramedullary hematopoiesis (EMH) and intracellular bile stasis all were statistically significant (p <0.05) in cases of EHBA while presence of bile plugs, intracellular bile stasis, EMH and giant cell transformation was statistically significant (p <0.05)in cases of NH and presence of Intracanalicular as well as intracellular bile stasis were statistically significant (p <0.05) with respect to cases showing cholestasis.

Conclusions: Thus, in children presenting with jaundice, hepatomegaly or other clinical presentations of underlying liver disease, liver biopsy can aid in understanding the underlying pathology in order to reach a definitive diagnosis and thus aid in proper management of patients in liver diseases.

These histological features include the presence of definite features like fibrosis, fatty change, ballooning degeneration, distortion of architecture of liver parenchyma, bile stasis, bile plugs and necroinflammation to name a few.2 These features are reviewed along with an evaluation of portal tracts, lobules and the central vein.1

The etiology of the disease can be assessed using liver biopsy in children presenting with signs and symptoms such as jaundice, hepatomegaly, pain in abdomen, ascites which are suggestive of underlying liver conditions. Liver biopsies are of significance in paediatric health care as they serve the dual purpose of being an excellent diagnostic tool while also aiding the assessment of the severity of the histopathological lesions identified.3

A retrospective and prospective observational study was carried out on all liver biopsies and liver resection specimens sent to the department of pathology for histopatholgical examination from May 2016 till May 2020. The patient selection was based on inclusion and exclusion criteria. For retrospective evaluation slides and requisition forms was collected from the Pathology department. The required history and clinical details was collected from the medical records department of Bharati Hospital.

Histopathological specimens was processed as per the standard methods. The tissue obtained from the biopsy was kept in 10% neutral buffered formalin. After processing, paraffin blocks were made and the sections were cut at 4 to5 micron thickness and stained with haematoxylin and eosin and other necessary special stains where indicated.

The sections were studied to form a histopathological report. The data thus generated was correlated with the clinical and investigational lab data collected to form the patient information sheet. The results were studied to reach a conclusion to the extent feasible about the etiopathogenesis and the pattern of distribution of the liver conditions in different age groups

The age distribution was divided into the following sub groups:

A) Patients demographic and clinical details.

It included the study of 34 pediatric patients with liver disease.

Gender distribution of the cases 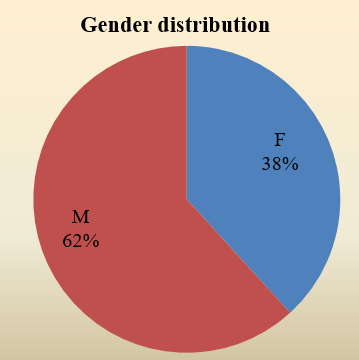 Laboratory profile of the cases

Deranged LFT were noted in majority of the patients (79.41%).

Correlation between radiology and histopathology

Correlation between radiology and histopathology

Thus, good agreement was noted between radiological and histopathological reporting upto the level of classifying the condition as neoplastic or non-neoplastic.

Histological features in cases of EHBA

Effaced architecture, necrosis, degeneration of hepatocytes were present in majority of cases of EHBA, it was not statistically significant with respect to EHBA cases.

Effaced architecture, necrosis, degeneration of hepatocytes were present in majority of cases, it was not statistically significant with respect to NH cases.

Out of 34 cases, cirrhosis was seen in 04 cases. None of the microscopic features were statistically significant with respect to cirrhosis.

Out of 34 cases, cholestasis was seen in 14 cases. Microscopic study showed that presence of Intracanalicular as well as intracellular bile stasis were statistically significant in with respect to cases showing cholestasis

In age group of Birth-1 month, Cholestasis related to EHBA and NH was the commonest finding.

In age group of 1 month-1 year, Cholestasis was the commonest finding seen in 12 cases, followed by equal incidence of EHBA and NH.

In age group of 1 year-5 year, 01 case of portal fibrosis was studied.

In age group of 5-16 years, 01 case each of embryonal sarcoma and 01 case of near normal biopsy was studied.

Total 04 cases of neoplasm were received, 02 of which were Hepatoblastoma, 01 was Embryonal sarcoma and 01 was from neuroendocrine tumor.

03 resections were received 01 was that of Hepatoblastoma, 01 was an A-V malformation and 01 was embryonal sarcoma.

These observations were made in 34 liver specimens (Biopsies & Lobectomy) received at Department of Pathology, Bharati Vidyapeeth Deemed University Medical College and Bharati Hospital, Pune over a course of 48 months.

In present study deranged LFT was the commonest finding amongst laboratory investigations which was in seen in 79.41% of the cases, this was similar to other studies all of which showed deranged LFT in a vast proportion of their cases.

Anti-CMV IgG antibody was the only positive viral marker and was seen in 8.82% of cases.

A study done by Shibata et al. (2005)11 showed 23% of cases of infantile hepatitis were positive for CMV DNA, thus indicating that CMV could be major pathogen responsible for hepatitis in pediatric patients.

In the present study no cases of Hepatotropic viruses were seen, including Hepatitis B virus which was common in older times. A possible explanation for this is the increasing awareness of universal precautions and the introduction of vaccination against hepatitis B in the national programme.

In the present study coagulation profile was deranged in 23.53% of cases, this was lower in comparison to other studies due to the protocol at our centre to normalise coagulation profile prior to any procedure to reduce risk of post-operative complications for the patients.

In present study an equal incidence of EHBA and neonatal cholestasis was seen (29.41%) which was also seen in study done by Dhole et al. (2015).6 All the above studies showed similar trend with respect to frequency of EHBA and Neonatal hepatitis.

In study by Ahmad et al. (2005)5 and study by Monajemzadeh et al. (2009)1 incidence of secondary hemochromatosis in Thalassemia Major patients was high in comparison to present study where we found no cases for the same. A possible explanation for this is the difference in prevalence of consanguineous marriages in different geographical regions. In present study we found a low incidence of metabolic disorders as compared to study by Hashmi et al. (2017)12 that found metabolic disorders to be the commonest etiology for liver diseases in children of which maximum cases were due to glycogen storage disorder.

Muthupei et al. (2000)13 also reported a reduced incidence in neoplastic and metabolic diseases in children which was similar to the present study as well as the other studies that have been tabulated.

In present study we found certain histological features which were statistically significant (p< 0.05) in certain conditions and could stand out as strong indicators for the same.

In cases of EHBA we found that bile duct proliferation, presence of intracanalicular bile plugs, portal tract fibrosis, presence of extramedullary hematopoiesis (EMH) and intracellular bile stasis all were statistically significant in cases of EHBA.

Thus, liver biopsy can aid in distinguishing between EHBA and neonatal hepatitis quite accurately, which is important for planning further management of the patient EHBA is treated surgically while NH has primarily medical management.

Features such as effaced liver parenchymal architecture, hepatocyte degeneration and necrosis were seen in many of the conditions and weren’t statistically significant to any particular pathologies. 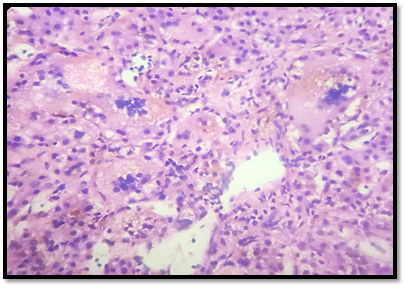 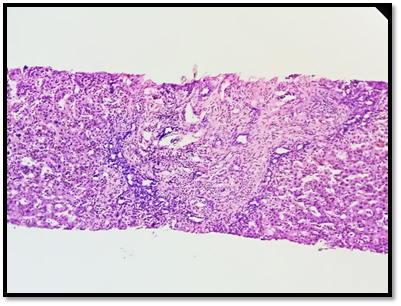 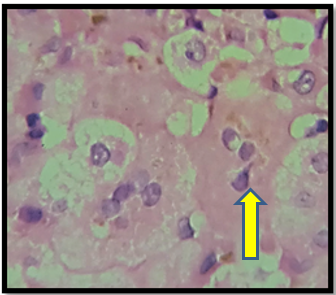 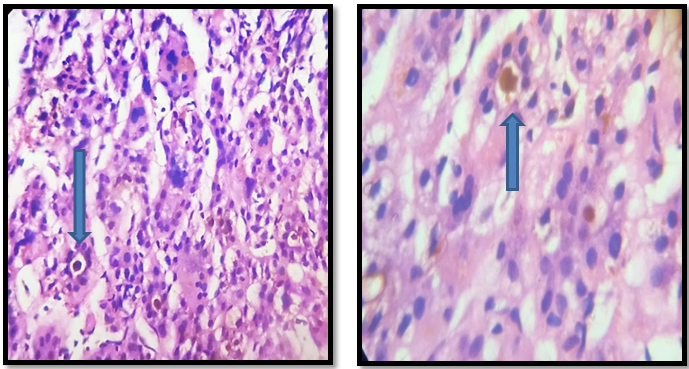 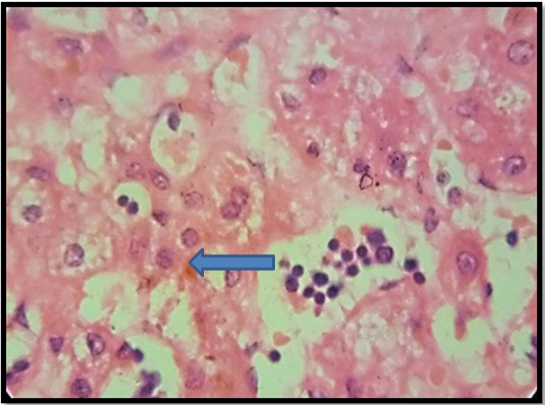 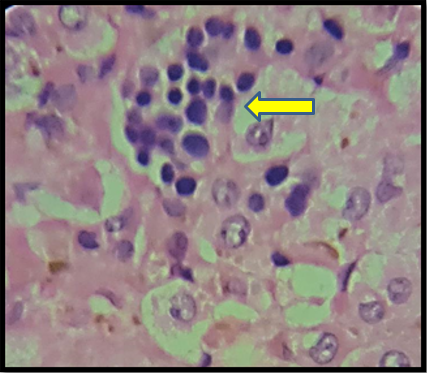 AN Onyiriuka KA Adeniran EPA Onyiriuka Prevalence of Hypoglycemia Among Patients Presenting with Cholestasis of Infancy in a Nigerian Teaching HospitalOman Med J2012273293210.5001/omj.2012.82