Mittal, Jindal, and Saha: Spectrum of round cell tumors in North -Western region of India

Spectrum of round cell tumors in North -Western region of India

Introduction: Round cell tumors are poorly differentiated tumors. Immunohistochemistry is a useful and cost effective approach for differentiation of Malignant round cell tumors. NonHodgkin’s Lymphoma and Ewing Sarcoma are most commonly encountered tumors among them.

Aim: (1) For categorization of round cell tumors. (2) To Study the occurrence and distribution of tumors in different age groups.

Materials and Methods: We studied 141 cases over a period of one year (January 2017 to December 2017). Formalin fixed, paraffin embedded sections of tumors diagnosed on small biopsies as well as resected specimens were taken. Immunohistochemistry was done on cases which were reported as malignant round cell tumors on routine HPE.

Pathologists commonly encounter a myriad of morphological patterns in the biopsies that they see in their routine clinical practice. Tumors which show differentiation towards their native cell of origin are easy to diagnose. Poor differentiation leads to a diagnostic dilemma. The term malignant round cell tumor or small round cell tumor or small round blue cell tumor (SRBCT) applies to a group of highly aggressive tumors composed of patternless sheets of undifferentiated, small and monotonous cells with increased nuclear-cytoplasmic ratio. Most of the times, light microscopy on Hematoxylin and Eosin (H&E) stainfails to diagnose malignant round cell tumors. The diagnosis of SRBCT is solely based on IHC and cytogentics. The tumors commonly included in this category are NHL, Ewing’s/PNET, neuroblastoma, small cell carcinoma, rhabdomyosarcoma and medulloblastoma. Other tumors that sometimes present as round cell tumors are Wilm’s tumor, Desmoplastic Small Round Cell tumor (DSRCT). The list can be expanded if we consider site specific round cell tumors.

We studied 141 cases submitted to the department of Pathology, SMS Medical college and attached Hospitals, Jaipur over a period of one year (January 2017 to December 2017). Formalin fixed, paraffin embedded sections of tumors diagnosed on small biopsies as well as resected specimens were taken. Cases diagnosed as Malignant round cell tumors on routine histopathological examination were included in this study. Immunohistochemistry was done using Peroxidase-antiperoxidase method with heat induced antigen retrieval technique. Ready-to-use primary antibodies of Biocare Medical were used. Positive and negative controls were used as per protocol. The panel selection was done based on histomorphological features and relevant clinical information. Accordingly the first broad panel of antibodies used included pancytokeratin (Pan-CK), LCA, vimentin, S100, neuroendocrine markers, CD99 and desmin. Second panel of antibodies were applied according to the results of the first panel.

Round cell tumors are characterised by scant cytoplasm and dark hyperchromatic nuclei. These tumors show characteristics microscopic appearance of small round cells that stain blue on routine Haematoxylin and Eosin stain.1 Instead of similar morphology, they are different genetically and biologically. Because light microscopy alone can not categorize them, ancillary techniques such as IHC, electron microscopy, cytogenetics, molecular profiling etc are required for separating these tumors from one another. IHC is easy to setup and cost effective from others. A panel of antibodies should be employed to give a specific diagnosis to rule out other lesions. Patients in this study belonged to all age groups, ranging from 8 months to 71 years. Most of the cases were of age more than 30years (60.28%). Of the 141 cases, 98 (96.50%) were males and 43 (30.50%) were females. Non Hodgkins lymphoma was the commonest among these small round cell tumors comprising 51.77% (73 cases). The next most common tumor was Ewing’s Sarcoma/PNET which had 28 (19.86%) cases. Table 1 shows the frequency of cases in our study. Out of total 73 cases of NHL, 37 were Nodal and 36 from Extra nodal sites. In extra nodal lymphoma, the common sites were nasopharyngeal and GIT. The other sites were parotid gland, cutaneous, soft tissue, testes, ovaries and orbital region for Lymphoma. 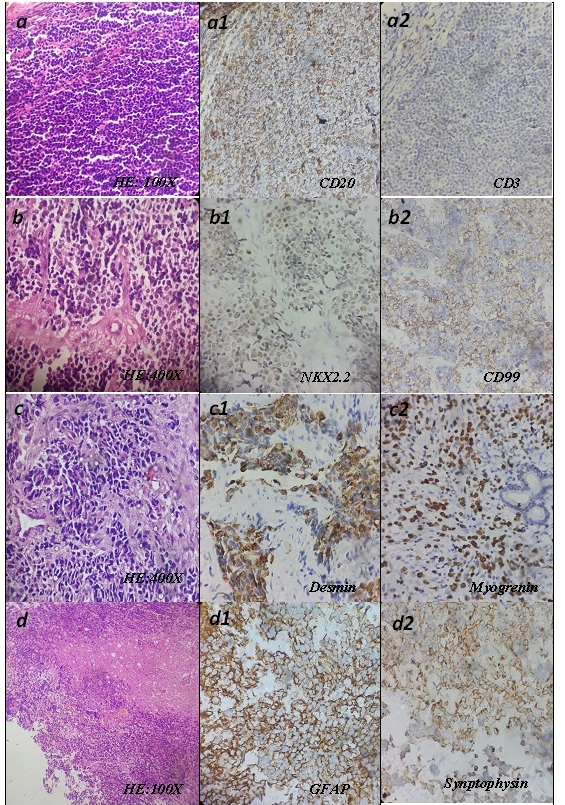 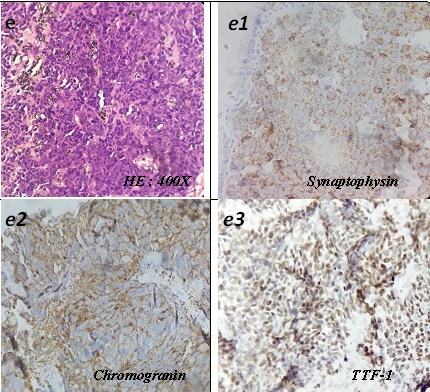 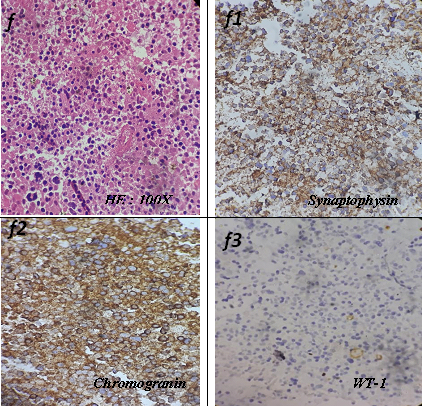 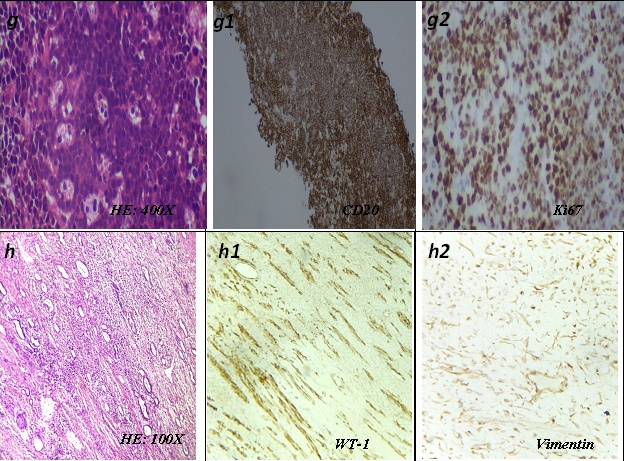 Final diagnosis of cases after IHC

Differential diagnosis of SRBCT includes varied group of tumors, treatment and management of each categories is different. So, a careful examination of H & E sections in an appropriate clinicoradiological background is required before using IHC for conclusive diagnosis. Histological diagnosis of most of the cases can be made by use of extensive panel of antibodies in malignant undifferentiated neoplasms.2

In this study, Lymphomas were the most common entity among all other round cell neoplasms (51.77%). Study of Bashyal R et al. and Ahmed Z et al. also showed lymphoma as the most common tumor type (52.5% and 65.30% respectively) in round cell tumors.2, 3 On performing IHC, tumor cells showed cytoplasmic and membranous immunoreactivity for CD45 in all cases of Non Hodgkin’s Lymphomas. The most common occurring NHL was DLBCL. Negative staining for Pan-Cytokeratin (Pan-CK) differentiated these tumors from carcinomas. They were also negative for specific markers of other round cell tumors. Further categorization of Non Hodgkin’s Lymphoma was done using second IHC panel that included CD20, CD3, CD10, Bcl2, Bcl6, CD5, CD23, MUM-1 and Ki67. Two cases of Burkitt’s lymphoma were diagnosed with clinical details and markers as CD 20, CD 10 and BCL-6 positivity. MIB score were 95% and 98% respectively.

Second most common category of round cell tumour was Ewing sarcoma/ PNET. Ewing Sarcoma usually arises from the diaphysis and metaphyseal region of long bones, but can affect any bony site. In present study, CD99 positivity was present in 24 out of 28 cases of Ewing Sarcoma. Cases negative for CD99 were confirmed as Ewing Sarcoma/ PNET because nuclear expression of NX2.2 and FLI1. In our study, Ewing Sarcoma most commonly occured in less than 30 years of age. Four patients were age above 30 years of age. Male to Female ratio was 4:3. Folpe AL et al study showed CD99 positivity in all cases of Ewing Sarcoma and T-Cell lymphoblastic lymphoma, while only 80% B cell lymphoblastic lymphoma cases showed CD99 expression.4 Labelling of Lymphoblastic Lymphoma is a difficult task because of its overlapping morphological and immunological features with Ewing sarcoma. Lymphoblastic Lymphoma shows positivity for CD99 and CD45 both.5

Again, we had three more cases received as core needle biopsy, diagnosis changed after IHC. A 19 years old male patient, presented as chest wall mass, reported as Ewing Sarcoma/ Liposarcoma on histopathology. Section showed more fat cells, and fibrous tissue with crushing artifacts on H and E examination. On performing IHC, tumor cells were positive for CD99, NKX2.2 and FLI1 and at the same time negative for S100, CD34, Myogenin and EMA, finally labelled as Ewing Sarcoma. Another case, an 18-month-old patient diagnosed as Ewing Sarcoma/PNET, came with differential diagnosis of Neuroblastoma because of retroperitoneal location and histomorphology. Similarly, a 5year old female child having vertebral mass diagnosed as PNET on IHC with CD99, FLI1, CD56, Vimentin and EMA positivity. This tumor was negative for CD34, NSE, OCT ¾ and PLAP.

In present study, we had 14 cases of primary small cell Lung carcinoma and Metastatic Small cell carcinoma of Lung. All cases except one were above 40 years of age. These cases were CD56 positive (92%), Synaptophysin positive (90%), TTF1 positive (60%) and Pancytokeratin positivity (91%). Metastatic small cell carcinoma of lung from other sites diagnosed with exclusion criteria, showed no expression of markers such as LCA, S100, vimentin, and CDX2. David Dabbs showed variable sensitivity for neuroendocrine markers like CD56, Synaptophysin, Chromogranin and NSE which were 95%, 80%, 85% and 82% respectively.8

Similar studies which were done by Tadashi Terada showed synaptophysin positivity (85%) and chromogranin positivity (62%) in the carcinoids.9 According to David Dabb’s, many SCLCs don’t express Chromogranin A, although the expression is proportional to cytoplasmic granules of neoplastic cells.8

Two cervical lymph node biopsies were primarily reported as Lymphoproliferative disorder on histopathology, however on IHC (LCA, CD99, CK, CD56, TTF and Synaptophysin), they were confirmed as metastatic small cell carcinoma of Lung.

Six cases were diagnosed as Neuroblastoma. Four cases were of age below 15 years while two cases reported as Olfactory neuroblastomas were above 40 years. All of our cases of neuroblastoma were positive for CD56 (100%), three cases showed NSE positivity, two cases were NF, Chromogranin and Synptophysin positivity. All cases showed LCA, Tdt, PanCK, Vimentin and CD 99 negativity. David Dabbs showed synaptophysin positivity in almost every cases of olfactory neuroblastoma.10 Five cases with posterior fossa SOL, were reported as Medulloblastoma. They were positive for CD99, Synaptophysin and GFAP. Three cases were less than 10 years of age. Four cases were reported as Rhabdomyosarcoma. These cases aged less than 15 years and all were males. Amongst these, three were from Head and Neck region and one was from abdominal wall. All were positive for Vimentin, Desmin and Myogenin, while negative for LCA and CD 99. One case showed dim positivity for pancytokeratin. Antibodies to desmin, myogenin and MyoD1 are useful markers to differentiate Rhabdomysarcomas from other small round cell tumors.11

Four cases were reported as Wilm’s Tumor. The patients were in age range of 1 to 5 years. All cases showed diffuse strong to moderate nuclear positivity of WT1 in blastemal and epithelial component. One case showed CD56 and another for NSE positivity. Study done by S goyal et al showed two groups of Wilm’s tumor patients. One group showed predominantly diffuse strong to moderate blastemal (75%) and epithelial (80%) positivity which was both nuclear and cytoplasmic and other group comprised eight Wilms’ tumour cases with prominent heterologous elements (>50%) which showed strong cytoplasmic positivity in skeletal muscle only.12 They found variability in the intensity of WT1 staining in the different components of the same patient and among the tumors having the same stage.12, 13