Vijaya and Sirisha: Study of fine needle aspiration cytology of breast lumps and their histopathological correlation among rural population of Vikarabad, TS

Study of fine needle aspiration cytology of breast lumps and their histopathological correlation among rural population of Vikarabad, TS

Introduction: Breast lumps are very common in patients presenting to the outpatient department. Most of them are benign lesions and the malignant lesions are diagnosed with the help of FNAC and ultrasonography. Carcinoma breast is the second most common cancer after cancer cervix.

FNAC is a safe, reliable, time saving and cost effective procedure useful in the diagnosis of carcinoma breast It helps the surgeon in planning the treatment, and thereby reducing the delay in treatment.

The present study is done with the aim of studying the incidence of various breast lesions on FNAC and their Histopatlological correlation among rural polation of Vikarabad.

Materials and Methods: This is a retrospective study carried out in in the Department of Pathology, MIMS, Vikarabad. 95 FNACs conducted in the department of Pathology from April 2019 to March 2020 were analysed. Of these 75 cases were subjected to histopathological examination.

Results: Of the 95 cases studied by Fine needle aspiration cytology, 76 were Benign and 10 were malignant. In 4 cases the aspirate was unsatisfactory and 2 cases were diagnosed as atypical. 3 cases were diagnosed as suspicious of malignancy. 75 cases were removed by either excision biopsy or Modified radical mastectomy and evaluated by histopathological examination the age group of the patients ranged from 18 to 70 years.

Breast lumps cause anxiety to the patients due to the underlying fear of malignancy. Although the majority of the lesions are benign, it is very important not only to exclude malignancy but also initiate and plan early treatment when malignancy is diagnosed.

According to a study, the recent trends of Breast cancer in India are as follows

Benign lesions of the breast are common in the age group 17 to 30 years. Carcinoma breast is the second most common cancer in Indian females after cancer cervix. The incidence has jumped from 7% to 16% in 30 to 40 age group patients. With increasing incidence in younger age groups especially in 30 to 40 age group, there is an urgent need for early diagnosis and treatment of these patients. False negativity of FNAC does occur; this could be caused by either “true” false-negative cases attributed to suboptimal sampling technique, poor localization of the mass or nonpalpable lesions or “false” false-negative cases due to interpretational errors.1

The present study was carried out with the aim of studying the effectiveness of FNAC in the diagnosis of malignant lesions of the breast and also to know the frequency of various lesions on FNAC and its Histopathological correlation, in a rural set up.

This is a retrospective study carried out in the department of Pathology, MIMS, Vikarabad. All the 95 cases of breast lump subjected to FNAC s between April 2019 to March 2020 were analyzed and correlated with their histopathology findings. Approval was obtained from Institutional Ethical Committee.

FNAC were done using 23 Gauge needle attached to a 10 cc disposable syringe. The smears were stained with Papanicolaou stain after fixation in 95% alcohol. Histopathological findings were noted in patients who underwent either biopsy or mastectomy. Statistical analyses were done to find out the accuracy of FNAC in diagnosing malignancy in the breast and compared to histopathology findings.

Inadequate samples were repeated twice or thrice, and the degree of success was improved with consecutive repeating approaches.6

The cytological study of 95 FNAC of breast done between April 2019 to March 2020 showed that 76 cases were benign, 2 cases were atypical, 3 were suspicious of malignancy, 10 cases were diagnosed as malignant. The findings in 4 cases was unsatisfactory.

Of the 76 benign cases identified by FNAC majority were fibroadenoma -55, followed by fibrocystic disease -15, suppurative inflammation i.e abscess -4, and phyllodes tumor -1. The cytological spectrum of 10 malignant cases showed that 8 cases were IDC and 1 each of medullary carcinoma and lobular carcinoma. In our study the benign lesions of the breast were seen in the age group 17 to 55 years, whereas malignant lesions were observed mostly in the age group 35 to 75 years. 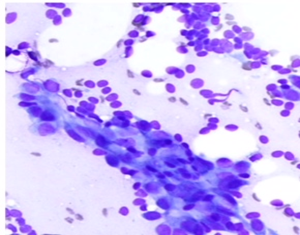 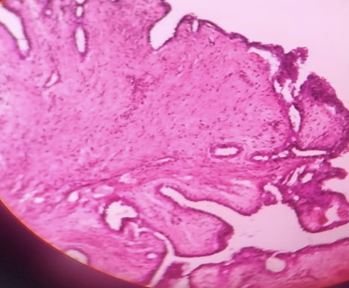 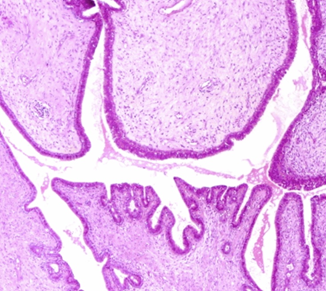 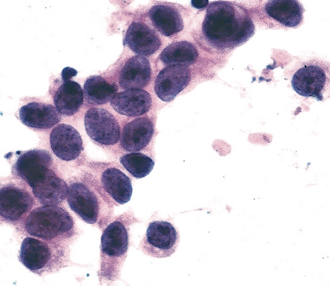 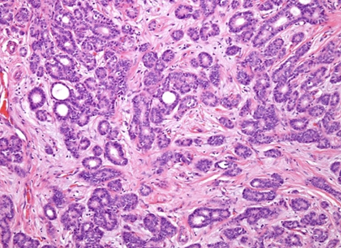 Histopathological diagnosis of the Breast lumps

Comparison of FNAC and Biopsy results

FNAC is reported to be 98% accurate in diagnosing benign breast lesions and 85.7% accurate for malignant lesions.2 In our study the incidence of benign lesions is 80% with FNAC, and 74% in biopsy. In our study two cases were reported as suspicious of malignancy and advised biopsy to rule out malignancy, to prevent unnecessary radical surgeries. Two cases diagnosed as atypical on FNAC turned out to be fibrocystic disease with apocrine metaplasia on histopathology. The cases with unsatisfactory smears were biopsied and found to be fibroadenoma-1 case and malignant lesions -2 on histopathology. The false positive diagnosis is due to presence of apocrine metaplasia in our study. Technical inexperience and observer inexperience also account for false negative diagnosis in these cases. The overall sensitivity and specificity for FNA was 83 and 92% respectively.

There were no false-positive cases, indicating a positive predictive value of 100% for a diagnosis of malignancy.