Background: Renal cell carcinoma (RCC) accounts for 80-85% of malignant kidney tumors. However incidence of RCC is less in Asian Countries including India and data available from Indian studies is scarce. Outcome of RCC depends on the morphological type and hence accurate classification is essential.

Aims and Objectives: The objective of the present study was to assess the profile of patients of RCC in respect to age distribution, Sex distribution, laterality of the tumor, location within the kidney and Pathological tumor stage and compare our results with available literature from India and other countries.

Material and Methods: The study is a retrospective study, which was conducted over a three and half year period from January 2016 to June 2019 at Goa Medical College, Bambolim Goa. A total of 60 cases of RCC diagnosed over this period were included in the study. Patient details were obtained from the Histopathology requisition forms from the records of Pathology department. The data was collected, analysed and compared with other similar studies. Histopathological examination of the specimens was conducted using standard processing technique and taking 5 micron sections and staining by Hematoxylin and Eosin technique.

Results: A total of 60 cases of RCC were diagnosed over 3and ½ year period with Clear Cell Carcinoma 38(63.3%) cases being the commonest histopathological type. The tumor was more commonly seen in males with a M:F ratio of 3.6:1. The age ranged from 25 to 78 years with a median of 56.5 years which is decade earlier as compared to Western data. The tumor size(Pathological stage pT) in this study was lower with 24 cases(40%) being diagnosed in pTa stage and 22cases(36.7%) treated with nephron sparing surgery which is a much higher figure as compared to other Indian studies.

Renal cell carcinoma(RCC) is the most common renal malignancy and accounts for about 2-3% of all diagnosed adult cancers worldwide.1, 2, 3 Incidence of RCC is highest in Europe, North America and Australia and low in Asian countries including India1, 4 Classification of renal tumors is complicated by the wide range of morphological types of RCC.5

RCC accounts for 80-85% of malignant kidney tumors.5 Outcome of RCC has been correlated with histological tumor type and hence accurate classification of RCC is essential.6 Clear cell carcinoma is the commonest histological type accounting for 70-80% of RCC while Papillary RCC accounts for 10-15%, Chromophobe RCC 5% and collecting duct carcinoma 1-2%.

RCC is primarily a disease of elderly and typically presents in the sixth and seventh decades of life.7 Data on Indian population on various epidemiological characteristics of this tumor is sparse in the literature.1, 4, 7 The objective of the present study was to assess the profile of patients of RCC in respect to age, sex distribution, laterality and location of the tumor within the kidney and Pathological tumor stage and also comparing the results with available literature data from other studies from India and abroad.

This is a retrospective study which was conducted over a 3 and half year period from January 2016 to June 2019 at Department of Pathology and Urology of Goa Medical College, Bambolim Goa, India. All cases of Renal cell carcinoma diagnosed by histopathological examination during the reporting year were included in the study. Other benign and malignant tumors as well as non neoplastic diseases of the kidney seen in the nephrectomy specimens during this period were excluded from the study. All patients’ epidemiologic data with respect to Age, Sex, and tumour findings like laterality, location within the kidney and histopathological findings like size pathological tumor stage, histopathological type of RCC were obtained from the Histopathological Requisition forms from the records of Department of Pathology. The specimens were processed for paraffin sectioning and 5 micron thick sections were obtained and stained with hematoxylin and eosin stain. The data was tabulated and the results were compared with those from other studies from India and abroad.

A total of 60 cases of Renal cell carcinoma surgically treated at the Department of Urology Goa Medical College and some private hospitals from Goa and referred to Goa Medical College for histopathology, during a three and half year period from January 2016 to June 2019 were included in the study.

The distribution of cases of RCC according to age and gender is shown in Table 2. The tumor was more often seen in males 47(78.3%) as compared to females 13(21.7%) giving a male to female ratio of 3.6:1. Majority of the cases of RCC were observed in the age group 40-70 years and the median age at presentation was 56.5 years. 33% of patients were younger than 50 years. The youngest patient reported with RCC was 25 year old male and the oldest patient was 78 year old.

The histopathological types of RCC is shown in Table 3. Clear cell carcinoma was the commonest histopathological variant. i.e. 38(63.3%) cases followed by Papillary RCC 14(23.3%)cases and chromophobe carcinoma 2(3.3%) of cases. 4(6.7%) cases of multilocular cystic RCC were encountered in the study.

The distribution of cases according to the pathological tumor stage is shown in Table 4. 24(40%) cases were diagnosed in pT1a stage of which 22(36.7%) were treated with nephron sparing surgery, whereas as overall 63.3% patients presented in Pathological Stage pT1.

Site of involvement of the kidney by the tumor

Distribution of renal cell carcinoma according to age and gender

Distribution of various morphological types of RCC amongst 60 cases 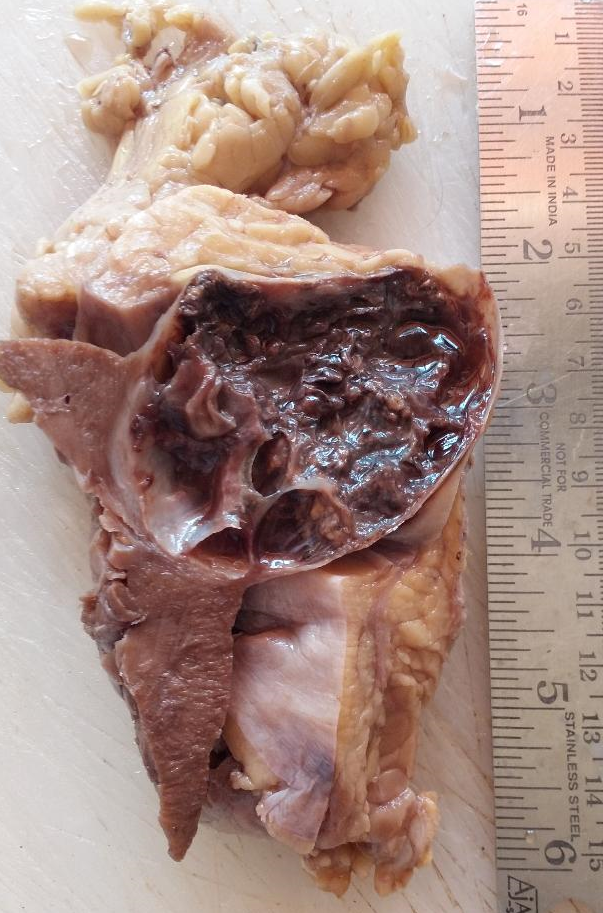 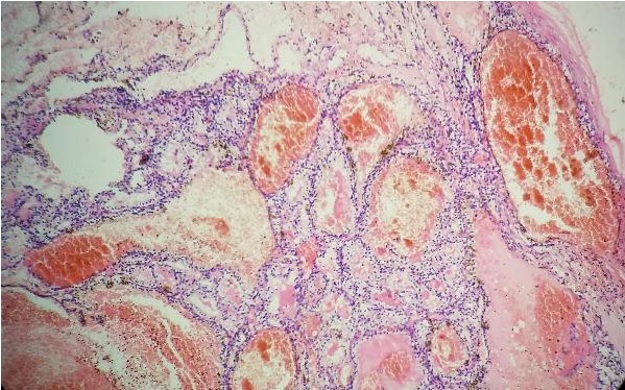 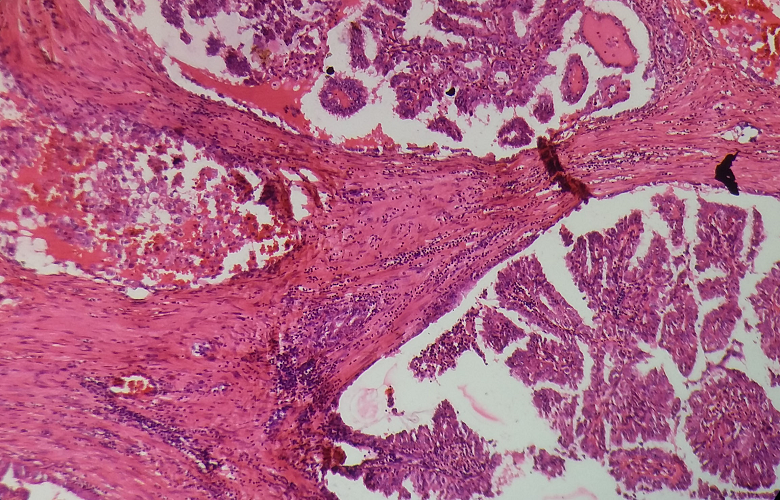 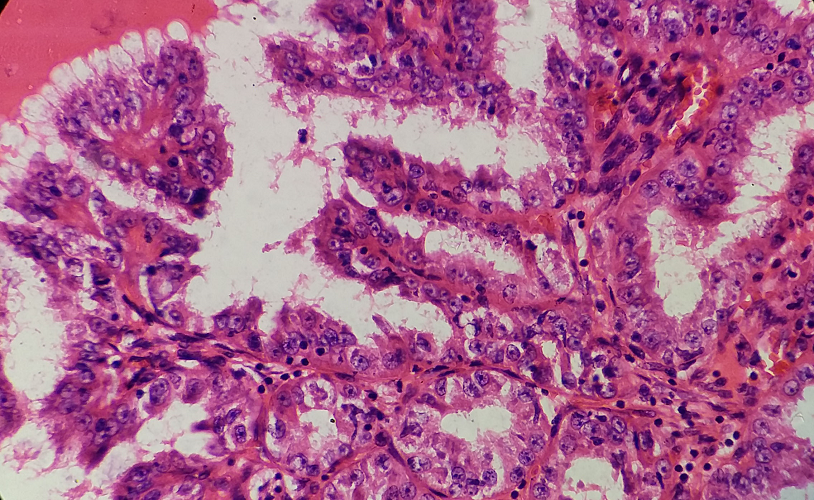 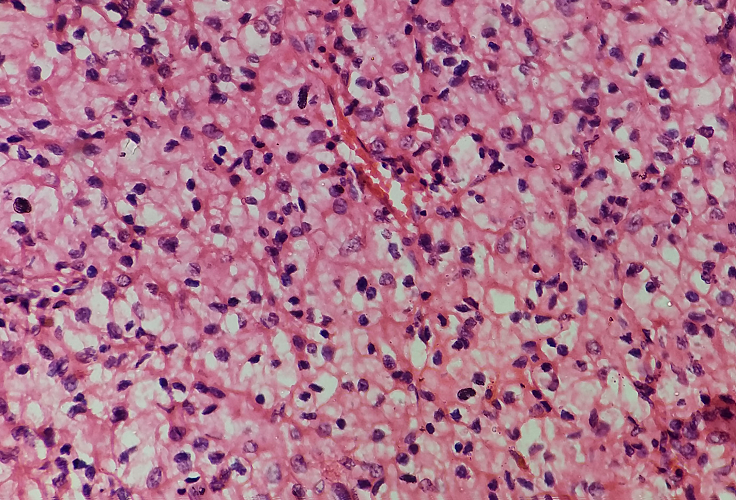 Renal cell carcinoma(RCC) is the most common renal malignancy worldwide.1 It is primarily a disease of elderly and typically presents in the sixth and seventh decade of life.7 As per the SEER(Surveillance Epidemiology and End Result) database, almost 50% patients with RCC present in the age group between 55 and 75 years and median age at presentation is 64.4

Data from larger epidemiological studies from West have shown that only around 3-4 to 5% of patients with renal tumous were less than 40 years of age.7 However in our study 11.6% and in another Indian study 12.3% of patients were below the age of 40, a number much higher as compared to that of western literature.

Thus it is observed that in Asian countries the median age at presentation of RCC is a decade earlier than in the west and in India more and more patients are presenting at an younger age.7

As per the existing literature from developed world the male to female ratio for RCC is 2:1.4 In our study the RCC was more often seen in males with a higher male to female ratio of 3.6:1 as compared to the west. Other Indian studies have also shown a higher male predominance for RCC compared to west, with M:F ratio of 3.5:14 and 6.3:12 respectively.

This difference in sex ratio may reflect the difference in perception in seeking health care for a male and female member of family due to limited financial resources in a developing country like India.7 Also it may be because of the greater exposure of males to risk factors as compared to females.1

SEER data suggest that 60-70% of the patients with RCC presented at Stage I and the increase in incidence of renal cancer in the last decade in the developed nations is attributed to tumours < 2cms and 2-4 cms in size.

In developing countries limited healthcare facility together with low socio-economic conditions of the population may be the reason patients present with advanced stage disease.1

The earlier stage at presentation in our study may be attributed to better health care facility, medical fitness of employees conducted prior to employment and their annual health check- ups wherein a fair number of tumors are detected incidentally.

As far as laterality of the tumor is concerned, in present study 32(53.3%) cases involved the right kidney and 28(46.7%) the left kidney. Similar observations have been noted by Humera et al.10 where involvement of right kidney was seen more often compare to left. This could be an incidental finding because no emphasis on laterality could be found in any other studies,10 and there are also studies wherein the Left kidney was more often involved as compared to Right.9

Papillary RCC is the second most histological type with frequency ranging from 1.6 to 24%. In our study Papillary RCC accounted for 23.3% of the RCCs which is much higher as compared to other Indian studies which showed 5.3%,1 10.9%5 and 11.4%7 respectively. However our figure of Papillary RCC is comparable to a study from Lebanon of (22.7%)3 and Pakistan(24%).8

To summarize Renal cell carcinoma in our study showed some differences as compared to other Indian studies and the World literature. The median age at presentation of RCC is a decade earlier than in the west and in India more and more patients are presenting at younger age. The Male to female ratio was marginally higher as compared to the Western literature.