Prabhu and Umashankar T: A study on Nottingham prognostic index and its correlation with ER, PR, HER-2/NEU and KI-67 in breast carcinomas

A study on Nottingham prognostic index and its correlation with ER, PR, HER-2/NEU and KI-67 in breast carcinomas

Aim: Carcinoma of the breast is one of the most common malignancy in women. Considering the tumour size, histological grade and number of lymph nodes involved, Nottingham Prognostic index (NPI) is calculated. This study has been designed to acquire information about various parameters in breast carcinomas and to calculate NPI score in each case and determine the relationship of NPI with various prognostic markers in breast carcinomas.

Materials and Methods: The present study was undertaken in the Department of Pathology, Father Muller Medical College, Mangalore for a period of two years. Breast cancers, diagnosed as Invasive carcinoma breast of no special type on lumpectomy and mastectomy was studied and cases were assessed with regard to age, laterality, quadrant involved, size of the tumour, lymph node status, modified SBR grade, hormonal receptor status (ER, PR), HER-2/Neu, Ki-67 and NPI status of the tumour.

Results and Conclusion: This study included a total of 100 infiltrating ductal carcinomas of the breast. The mean age of presentation was 52.05 years. On cross tabulation of NPI with pathological parameters only modified SBR grade showed statistically significant association with NPI at 5% level of significance(‘p’<0.001). There was no good agreement between NPI with ER, PR, HER-2/Neu and Ki-67 values. This study shows that there exists no relation with NPI and the prognostic markers and hence have to be evaluated separately to determine the prognosis of the patient.

Breast cancer, as we know, is a disease with differing behaviour in response to hormonal therapy and also its uniqueness in expressing the hormonal receptors. Various prognostic models have been described and proposed to investigate the patient and predict the possible clinical outcome. Nottingham Prognostic Index (NPI) is a well-established prognostic index which is calculated by using three important parameters which determines the prognosis of the patient.1

Pathological tumour size, lymph node status and histologic grade of the tumour. These three factors were assessed together and were used as a prognostic index. The sum total of these factors is calculated and higher the value means poorer the prognosis.1

Pathological tumour size, lymph node status and histologic grade of the tumour. These three factors were assessed together and were used as a prognostic index. The sum total of these factors is calculated and higher the value means poorer the prognosis.2 NPI is basically designed to determine the prognostic outcome of the patient. Cut-off values of 3.4 and 5.4 were used and accordingly the patients were divided in to three groups. These three subsets are: Group 1 with good prognosis (score up to 3.4) with five-year survival rate predicted to be 80%; group 2 with moderate prognosis (score 3.4 to 5.4) with 42% five-year survival; and group 3 with poor prognosis (score greater than 5.4) with 13% five-year survival.1

This study has been designed with the purpose of evaluating the various prognostic markers used in breast carcinomas such as modified SBR grade ER, PR, HER-2/Neu status and cell proliferative activity using Ki-67 and their statistical correlation with NPI score.

The study was undertaken in the Department of Pathology, Fr. Muller Medical College, Mangalore, Karnataka for a period of one year and six months. This is a prospective study consisting of 100 cases of primary breast carcinoma, between October 2017 and April 2019. Breast cancers, diagnosed as Infiltrating ductal carcinoma of no special type on lumpectomy and mastectomy were studied. Representative sections from the lumpectomy and mastectomy specimens were submitted for histopathologic examination, stained with H & E and ER, PR, HER-2/Neu and Ki-67 assessment was done routinely as a part of protocol for breast carcinoma cases. The pathological features studied included size of the tumour, histologic type, histologic grade and lymph node status. Immunohistochemical status of ER, PR, HER-2/Neu, Ki-67 was evaluated using standard techniques. Grading of tumours was done based on the Elston-Ellis modification of Scarff-Bloom-Richardson (SBR) grading system. H scoring was used to evaluate ER, PR status and HER-2/Neu was graded based on the intensity of membrane staining. For statistical evaluation, the cases were grouped in to ER negative and ER positive. Cases with ER status as weak, moderate and strong positive were clubbed in to ER positive group. The same was done for PR status. HER-2/Neu cases with equivocal status were excluded from our study. We used 14% as cut off for Ki-67 to divide tumours in to high and low proliferative tumours based on 2011 St Galen International Expert Consensus.

Later the NPI is tabulated as follows according the prognostic group.

Prognostic grouping of cases according to NPI

Kappa statistics was done to check the level of agreement between NPI and modified SBR grade, ER, PR, HER-2/Neu and Ki-67.

This study included a total of 100 infiltrating ductal carcinomas of the breast. The age of the patients in the study ranged from 29 years to 88 years, with a most common age group of 41-50 years and mean age of presentation of 52.05 years. Left breast (53%) was most commonly involved than the right breast, and upper outer quadrant (37%) was the most common site of involvement. A majority subset of our cases had lymph node involvement (53%), T2 (68%) stage presentation. Modified SBR grade 2 was the most common histologic grade of the tumours (50%). Majority of our cases (88%) were categorized with high Ki-67 proliferative activity (≥14%) and 64% of our cases belonged to NPI group 2.

On cross tabulation of NPI with pathological parameters only modified SBR grade showed statistically significant association with NPI at 5% level of significance(‘p’<0.001). There was no good agreement between NPI with ER, PR, HER-2/Neu and Ki-67 values. 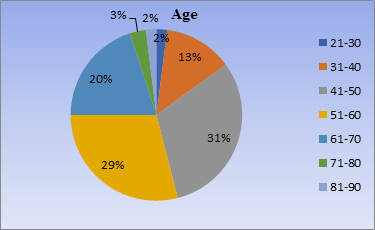 Percentage distribution of cases based on NPI 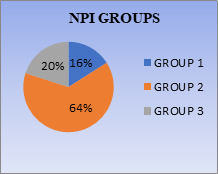 Expression of ER in various groups of NPI

Expression of PR in various groups of NPI 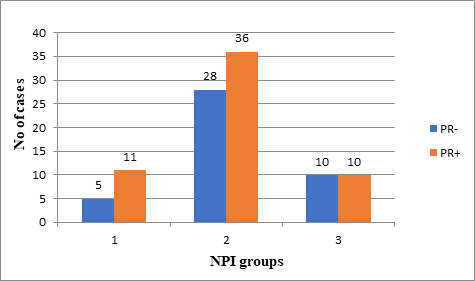 Expression of HER-2/Neu in various groups of NPI 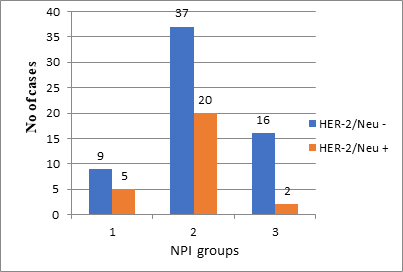 Expression of Ki-67 in various groups of NPI 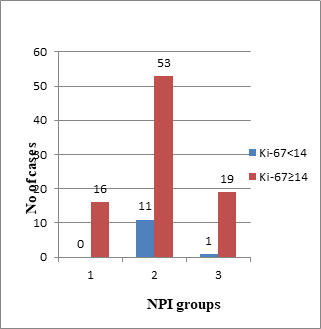 Expression of Ki-67 in various groups of NPI

The p value of <0.001 suggests that there is good agreement between Modified SBR and NPI grading.

In our study, majority of the cases (31%) are distributed between 41 to 50 years and mean age being 53.15 years. This finding is consistent with the study undertaken by Fasching et al. and Gong et al. where the mean age of presentation was 53 and 50.7 years respectively.3, 4

Present study demonstrated that of all the parameters evaluated, only SBR histologic grading has significant association with NPI scoring system. No correlation was noted between NPI and ER, PR. Our study was comparable with the findings of Vedashree et al where the study was done on 73 patients diagnosed with breast carcinoma and NPI was studied against age of patients, menopausal status, and tumour size, number of lymph nodes involved, grade of the tumour, ER, PR status and HER-2/Neu status. None of the parameters showed significant correlation.5

The histologic tumour grade, as defined by modified SBR, showed significant association with NPI, since the grade is one of the components of NPI. In our study comprising of 100 cases, p value was <0.001. Grade of the tumour was directly proportional to the NPI value. Our findings were supported by a study done by Agarwal et al. in which NPI value was compared with various other prognostic factors and on statistical analysis, found significant association with histological grade of the tumour which was assessed by modified SBR grading (p<0.05).6 Another study to substantiate our findings was by Albergaria et al. were the NPI status was exclusively studied in triple negative breast cancers. A significant association was seen with the histologic grade of the tumour and also the NPI status and thus survival.7

Several studies have been done in this area which showed significant correlation between NPI and other breast biomarkers stating that NPI can used in poor resource settings. Tumours with low NPI showed high ER, PR expression and hence good prognosis. This was proved not to be true by our study, also by Ljiliana HLupic8 and Masarwah9 who showed no association between NPI and breast biomarkers and had to be assessed as individual prognostic markers. This contrasts the findings in a study by Kurushmilu and Rakha, who studied the relationship of NPI with various parameters where NPI was compared against ER, PR, HER-2/Neu, Ki-67, p53 and Bcl-2 status. Positive expression of ER, PR status was inversely related to NPI numerical value.10, 11 A study by Green et al. showed that ER, PR status showed major concordance.12

Our finding was contradicting most of the studies which stressed on direct correlation with ER, PR status.

Several studies have shown that HER-2/Neu status is a predictive factor independent of the NPI. Van Belle created a new prognostic classification system by adding HER-2/Neu and PR in NPI.13 Our study showed no positive correlation with NPI and HER-2/Neu status. It was observed that higher lymph node status and big tumour size in HER-2/Neu negative cases raised the NPI value which resulted in downgrading of cases in to poor prognosis group (NPI group 3) in spite of HER-2/Neu negative status.

Our study showed no significance between NPI and ki-67 values (p=0.102). There are limited studies in literature were NPI and Ki-67 has been compared. Kurshmilu et al. conducted a study on patients and showed positive relationship of Ki-67 status and NPI grade. He demonstrated positive correlation with NPI and Ki-67 status at 14% cut-off. Low and high proliferation index was seen in cases with low and high NPI values10 which was not true in our case.