Solitary fibrous tumour (SFT) is a mesenchymal fibroblastic neoplasm which is characterized by varying degrees of stromal collagenization including keloidal type collagen in extreme cases. It often shows hemangiopericytoma like architecture and is composed of bland spindled cells in a variably collagenized stroma. SFT shows diffuse strong STAT-6 immunohistochemical expression. We describe a case of an SFT in the palate which showed areas of hyalinization and dense collagen deposition mimicking osteoid along with SATB2 IHC positivity which can be a diagnostic pitfall.

Solitary fibrous tumour is a mesenchymal neoplasm initially described in pleura but later on described in several extra-pleural locations.1 Head and neck accounts for 6% of overall cases, of which up to one-third cases occur in the oral cavity.1, 2 This tumor has a varied morphological presentation ranging from hypocellular areas with dense sclerotic collagenous stroma with markedly hypercellular areas. Areas of stromal and perivascular hyalinization as well as keloidal type collagen is commonly seen.3 We wish to highlight a unique case of a SFT in the palate which showed areas of hyalinization and dense collagen deposition mimicking osteoid along with SATB2 IHC positivity.

A 43-year-old male presented with a recurrent swelling over the right upper jaw for 10 months. Previously, the patient had developed a swelling in the same area seven years back and underwent an excision of the same. It was diagnosed outside as a low-grade mesenchymal neoplasm, however, no further immunohistochemical workup was done. Now, on examination, a submucosal smooth fleshy mass was seen in the hard palate, in the region of the 2nd and 3rd molars, extending to & involving the soft palate. A CT scan showed a 27x24x18 mm mass abutting medial pterygoid with minimal extension into the lateral pharyngeal wall & eroding the bone. A biopsy was done to establish the diagnosis.

HE sections showed multiple tumor fragments composed of epithelioid to spindled cells arranged in a haemangiopericytomatous (HPC) & diffuse pattern with collagen deposition around tumor cells. Few areas showed dense eosinophilic substance deposition around tumor cells which was strongly reminiscent of osteoid (Figure 1a & 1b). Tumor cells showed mild atypia & occasional mitotic figures (1-2/10 hpf). No areas of necrosis were seen. In view of a clinical impression of a jaw swelling along with multiple foci of dense eosinophilic substance deposition resembling osteoid, a possibility of an Osteosarcoma was considered. An initial panel of CK, p63 and SATB2 (EP281, rabbit monoclonal, Pathnsitu) was done. CK & p63 were negative while SATB2 showed moderate intensity staining in majority of tumor cells (Figure 1 c). However, in view of soft tissue location, HPC pattern, lack of cytologic atypia and significant mitotic activity, a possibility of an SFT was considered and additional IHC done. IHC for CD34 showed strong positivity while S-100, SMA & desmin were negative. STAT-6 showed strong diffuse positivity (Figure 1d), thus confirming the diagnosis of an SFT. 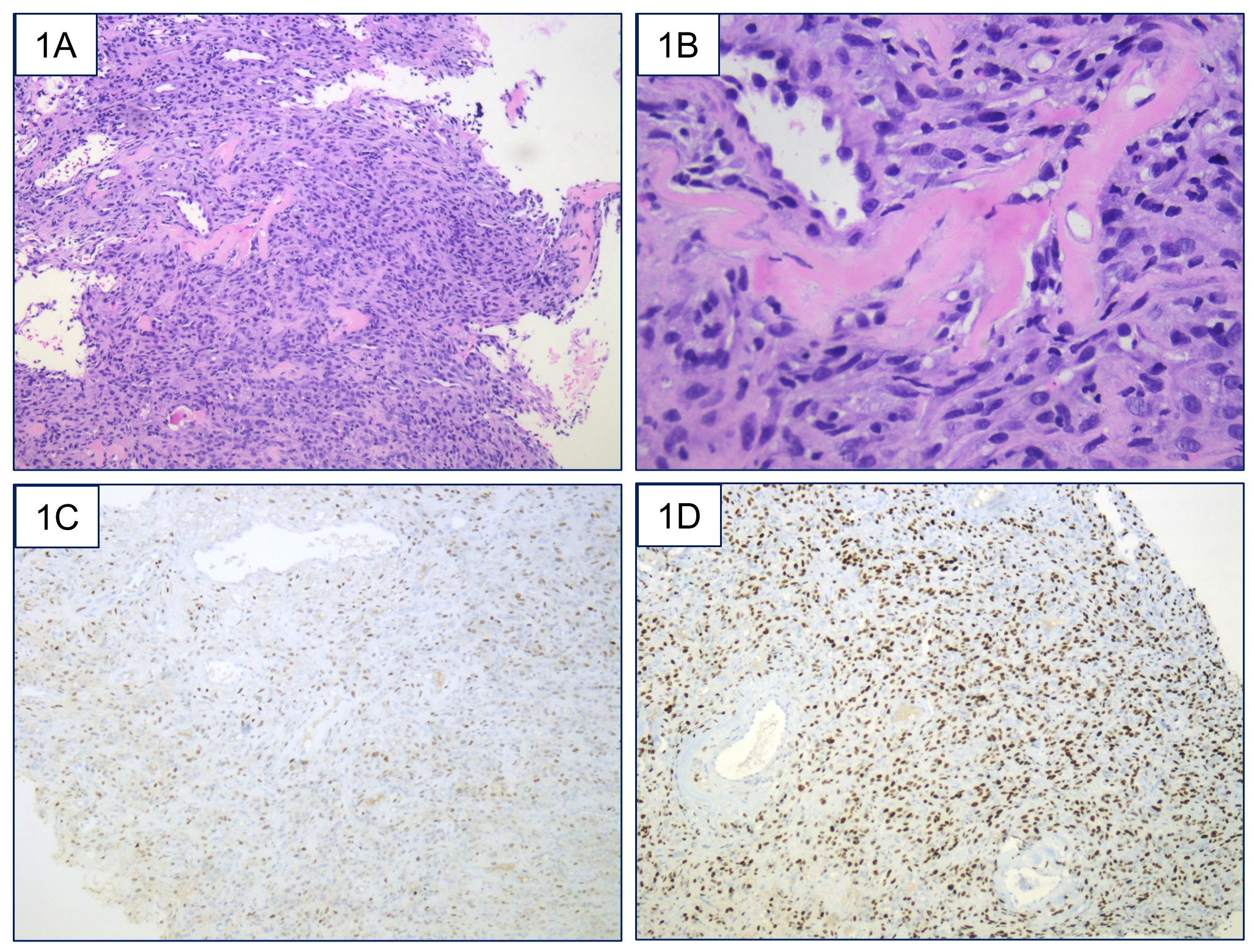 The patient subsequently underwent a wide local excision. On histopathological examination, the tumor showed similar morphology as the biopsy. No features of malignancy (necrosis, mitotic activity) were seen and excision margins were free of tumor. The patient is alive and free of disease 2 months after excision.

Special AT rich sequence binding protein (SATB 2) is a transcription factor which binds to the AT rich region in the chromatin.4, 5 It is highly expressed in epithelium of lower gastrointestinal tract, neurons in cerebral cortex & hippocampus, non-germinal center lymphoid cells & ductal epithelium of testis and epididymis.5, 6 Among tumors, it is strongly expressed in colorectal adenocarcinoma, tumors of osteoblastic differentiation (including osteosarcoma) & also in liposarcoma.7, 8 Weak to moderate expression is seen in sinonasal, ovarian, breast, lung & urothelial carcinomas.5

Currently, in diagnostic practice, SATB2 IHC is used in two clinical settings. First, in conjunction with CK7 & CK20 for determining a colonic origin of a metastatic adenocarcinoma. Second, for determining osteoblastic differentiation in bone tumors (including osteosarcoma). In our case, based on morphological features showing osteoid like areas, a possibility of an osteosarcoma was considered & SATB2 IHC was done which showed moderate expression in majority of tumor cells. As other morphologic features like HPC pattern, lack of cytologic atypia and mitosis were not supportive of osteosarcoma, additional IHC workup for STAT-6 was done which confirmed the diagnosis of an SFT. This aberrant expression of SATB2 in SFT is a significant diagnostic pitfall.

It is essential to remember that aberrant expression of SATB2 can be seen in many tumors. Clinical & other histological features must be taken into consideration as not every tumor expressing SATB2 showing osteoid like areas is an osteosarcoma. Although an oral presentation of an SFT is uncommon, nevertheless, it must be kept as a diagnostic possibility when suspecting a low grade mesenchymal tumor in the head and neck region.