Mixed- phenotype acute leukaemia (MPAL) is very rare and accounts for less than 4% of acute leukaemia. Most cases of MPAL described in literature, are of T/myeloid or B/myeloid phenotype. MPAL T/B cell lineage is exceptional and occasional cases reported so far, are leukaemia with bone marrow involvement. Our case, on immunophenotyping, exhibited evidence of T and B- Lymphoid lineage. It could be diagnosed neither as MPAL, because the bone marrow was not involved, nor as lymphoblastic lymphoma because of the bi phenotypic expression of both T and B cell antigens. Hence, we reported it as Mixed phenotypic (T cell/B cell) Lymphoblastic Lymphoma. This is the first case, extra medullary as well as extra lymphoid in location, presenting as right elbow synovial lesion. We also discuss the potential diagnostic pitfalls and emphasise the importance of Immunohistochemistry in diagnosis of lymphoblastic lymphomas.

Mixed- phenotype acute leukaemia (MPAL) T/B cell lineage is extremely rare and the characteristics like Epidemiology, clinical presentation, prognosis of such cases are not reported in literature.1 MPAL refers to leukaemia that contain blasts, which express antigens of more than one of the three lineages namely; Myeloid, T cell and B cell.2 MPALs can have distinct population of blasts, each group of a different lineage (previously called as acute bilineal leukaemia) or a single population of blasts with the same cell expressing multiple antigens of diverse lineages (previously called as biphenotypic leukaemia), or a combination of both.3 Ambiguity of antigen expression commonly involves the myeloid lineage coexisting with either B-cell or T-cell lineage, nevertheless exceptional cases of ambiguity between B and T cell antigens too occur.4 In certain sites and scenarios, Immunohistochemistry with markers like Cluster of differentiation (CD) CD99 and Friend Leukaemia Integration-1 (FLI-1) has potential pitfalls and hence the panel of antibodies should be carefully chosen, to arrive at a diagnosis.5 Immunophenotyping plays a very vital role in assignment of such cases to mixed phenotypic category. Their recognition is crucial, because such patients have poor prognosis, require intensive chemotherapy, many are resistant to treatment and generally have a poor outcome.6

A 15-year-old boy presented with complaints of swelling in the right elbow joint of 3 months duration. Magnetic Resonance Imaging (MRI) scan revealed mild humeroulnar joint effusion with synovial thickening, mild altered signals in lower one third of Humerus with periosteal reaction, suggestive of an infective aetiology and hence a synovial biopsy was performed. Morphology on Haematoxylin & Eosin stained slide (Figure 1 a and 1b) revealed a neoplasm composed of diffuse sheets of small round cells with focal crush artefact, favouring a differential diagnosis of Ewing’s sarcoma and lymphoblastic lymphoma. Hence we proceeded with Immunohistochemistry for a definitive diagnosis, which was performed on automated Roche Ventana Benchmark GX. The preliminary panel of markers chosen were CD 99 (O13 clone), LCA (2B11+PD7/26 clone) and Vimentin (EP21 clone). This revealed a CD 99 positive (Figure 2 a), Vimentin positive (Figure 2 b) and LCA negative tumour, favouring a diagnosis of Ewing’s sarcoma. Next an panel of immunohistochemical markers comprising of FLI-1 (G146-22 clone), TdT (EP266 clone), CD34 (QBEnd/10 clone), CD3 (Polyclonal), CD 20 (L26 clone) and then subsequently CD 19(LE-CD19 clone) and CD79a (SP18 clone) were performed. The results were as follows: FLI-1 positive, CD34 positive, TdT positive (Figure 3 a), CD3 positive (Figure 3b), CD19 positive (Figure 3c), CD79a positive (Figure 3d) and CD 20 was negative. The neoplasm was revealed to be an Acute lymphoblastic lymphoma/leukaemia, expressing both T and B cell antigens. Therefore, a bone marrow examination was requested for further evaluation. The bone marrow aspiration and bone marrow trephine biopsy (Figure 4a and 4b) performed, revealed a normocellular marrow with normal trilineage haematopoiesis, ruling out the possibility of leukaemia, hence could not be called MPAL and furthermore, because of co expression of both the T and B lymphoid lineage antigens, a final diagnosis of Mixed phenotypic Lymphoblastic lymphoma (T cell / B cell) was rendered. Two weeks post biopsy, repeat MRI scan revealed moth eaten destruction and cortical erosion involving the right distal humerus, proximal radius and ulna with surrounding soft tissue swelling, suggesting spread of tumour from synovium into both side bones. The patient was started on and is undergoing intense chemotherapy.

Histology of synovial biopsy: a) Diffuse sheets of small round cells (H&E 10X) (b) Cells showing scant amounts of eosinophilic cytoplasm, round nuclei with conspicuous nucleoli in some (H&E 40X). 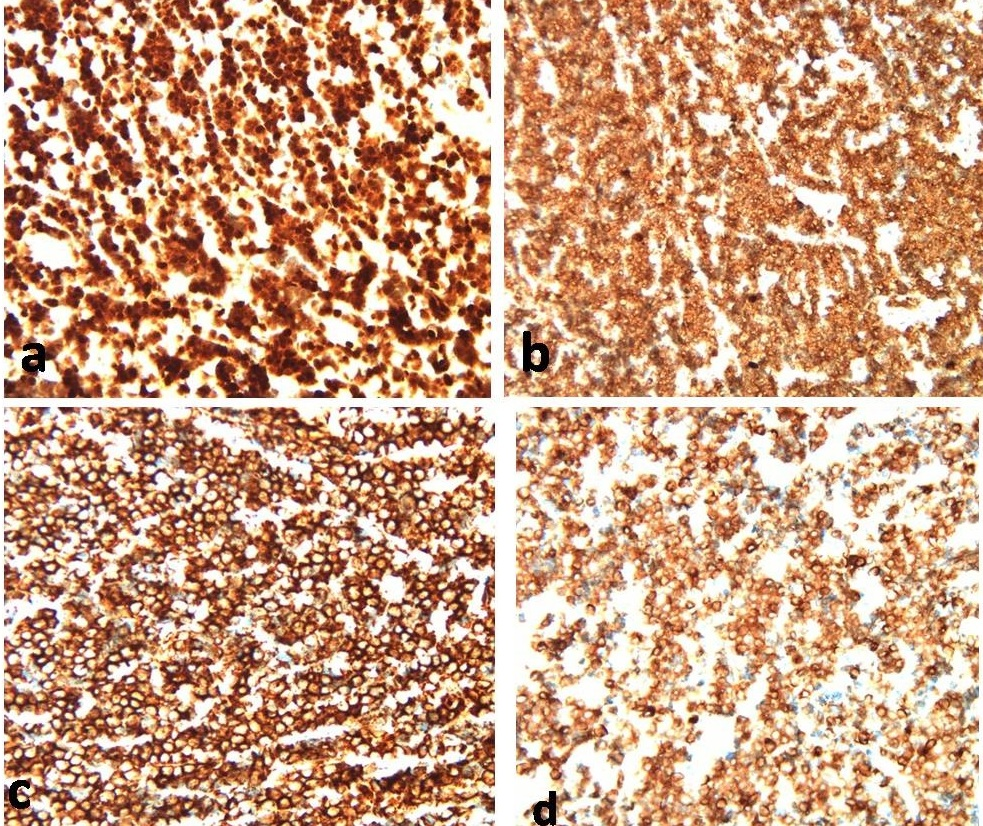 The 4th edition of World Health Organization (WHO) Classification of Tumours of Haematopoietic and Lymphoid Tissues proposed new consensus criteria to diagnose MPAL1 and in the updated 2016 classification, these criteria has been retained without modification.6 According to WHO, Myeloperoxidase is the most specific marker for myeloid lineage. Although expression of any two of the markers: CD11c, CD14, CD64, NSE and lysozyme is also used to assign myeloid lineage. Diagnosis of T cell lineage requires cytoplasmic or surface expression of CD3 antigen while confirmation of B cell lineage mandates strong CD19 expression along with presence of any one of the three antigens CD79a, CD22 or CD10.6 Our case had expression of TdT and CD34, which established the diagnosis of Lymphoblastic Lymphoma along with the expression of T cell antigen CD3 and B cell antigens CD19 and CD 79a, substantiating our diagnosis of Mixed phenotypic Lymphoblastic lymphoma, T/ B cell phenotype.

WHO Classiﬁcation of hematopoietic and lymphoid tumours, 2016, classifies MPAL into five types namely: MPAL with t (9; 22) (q34; q11.2), MPAL with MLL rearrangement, MPAL B/myeloid not otherwise speciﬁed (NOS), MPAL T/myeloid NOS, and MPAL NOS rare types.6 The common types are MPAL B/myeloid NOS, accounting for 1% of cases, more common in adults, have clonal cytogenetic abnormalities, complex karyotype, has poor outcome7 and MPAL T/myeloid, NOS accounting for less than 1% of all cases, slightly more common in children, similarly has a poor prognosis.8 MPAL NOS other rare types, like T / B cell is very rare and only 29 cases are reported in literature so far; Single case reports include those by, Costa et al.9 in 2008, Naghashpour et al.10 in 2010, Kohla et al11 and Sharma et al12 in 2015, Pawar et al13 in 2017. Larger cohorts include 3 cases reported by Gujaral et al14 in 2009, 4 cases contributed by Matutes et al15 in 2011, 9 cases by Mi et al16 and 8 cases by Alexander et al17 in 2018. All these cases have intra medullary involvement, presenting as acute leukaemia. Our extensive literature search did not reveal any case of extra medullary and extra lymphoid MPAL T/B cell type reported in literature, so far.

In a study of MPAL in paediatric cases, Rubnitz et al identified that T cell / myeloid is the most common phenotype in children.18 Our case was a 13-year-old boy, presenting with T cell / B cell phenotype.

Even though the presumed cell of origin of MPAL is unidentified, it is probable that this arises in an early haematopoietic, common lymphoid progenitor cell that has the potential to undergo either B cell or T cell differentiation.19

Differentiating cases of (LL) from (ES) is tricky as they have overlapping morphology and Immunohistochemistry findings. However, this is crucial because of their different clinical behaviour and treatment. Lucas et al., studied 27 cases of LL, 17 cases of ES and observed that two cases of LL were initially misdiagnosed as ES. They concluded that a panel consisting of CD99, Terminal deoxy Transferase (TdT) and vimentin along with other lymphocytic markers is helpful in differentiating these two entities.23 However, Terada reported a case of TdT negative, CD99 positive and CD34 positive, T Lymphoblastic lymphoma and suggested inclusion of other precursor cell markers like CD34, KIT in the LL diagnostic panel.24

In our case, Immunohistochemistry panel revealed a CD 99 positive, FLI-1 positive and LCA negative tumour, favouring the diagnosis of (ES), especially the site of biopsy, being synovium. However an adequate panel of markers used, helped in arriving at the correct diagnosis of lymphoblastic lymphoma.

Since both CD3 and CD79a were positive, a possibility of biphenotypic lymphoma was considered. However, transient and weak expression of CD79a is present in immature cells of T‐ cell lineage and hence cases of T cell Acute lymphoblastic leukemia /lymphoma, can show aberrant expression of CD79a.25 Hence CD19 was performed, which was also positive, thus confirming the bilineage expression.

Cases of MPAL have a poor prognosis, are resistant to conventional chemotherapy, have an aggressive course and may require intensive therapy.26 The initial MRI scan showed involvement of synovium, but the post biopsy MRI after two weeks showed spread to bones, thus suggesting an aggressive course.

Cases of Lymphoblastic lymphoma should be reported with an expanded panel of markers to avoid misdiagnosis. Reporting all such, cases of MPAL, encountered in routine practice, will aid to enrich the literature and subsequently help to unveil the clinical features and prognosis of these rare tumours in future.