Clear cell sarcoma is a rare tumor with a predilection to involve tendon and aponeuroses, predominantly around the foot and ankle region. It is clinically, genetically as well as biologically distinct from malignant melanoma, however share some histological and immunohistochemical similarities with it. Clear cell sarcoma usually arise from the deep soft tissue of lower extremities and carries a balanced translocation t(12;22) (q13;q12). The fusion protein activates MiTF, a melanocytic transcription factor which leads to tumor growth and melanin production. The head & neck and trunk are distinctly unusual sites for occurrence of CCS. We herewith describe a CCS in the pelvis of the 26 years-old male patient presented with the chief complaints of paraesthesia, weakness, muscle wasting in right lower limb with foot drop since one year with review of literature.

Clear cell sarcoma (CCS) is a rare, aggressive tumor represents about 1% of soft tissue tumor, was first invented by Enzinger in 1965. As it share morphologic, immunohistochemical, ultrastructural and molecular features with MM, Chung and Enzinger in 1983 offered the term ‘malignant melanoma of soft part’.1, 2, 3, 4, 5 CCS commonly affects tendon and aponeuroses of foot and ankle region, followed by affects knee, thigh, forearm, elbow and shoulder in descending order of frequency.1, 2, 3, 4, 5, 6 The purpose of this case report is to draw attention to CCS in the differential diagnosis of pelvic mass while assessing initial diagnosis of malignant melanoma.

A 26 years-old male patient presented with a chief complaints of paraesthesia, weakness, muscle wasting in right lower limb with foot drop since one year. His vitals and other lab investigations were within normal limits. A hard lump was palpable in hypogastrium extending into pelvis, fixed to underlying structure.

CECT scan revealed an enhancing soft tissue density pelvic mass (size 13.2x12.5x12.5cm) with necrosis (Figure 1 a, b), muscle infiltration and bony erosions (1c). Marked displacement of the urinary bladder, rectum and the iliac vessels (1d, e) to the right and the extrapelvic extension of the lesion into the intermuscular gluteal planes through the widened right sciatic foramen was noted. Although the exact organ of origin could not be depicted, the widened foramen suggested the plausible origin along the right sciatic nerve and the infiltrative nature with enhancement suggesting malignant behaviour. This led to the radiological diagnosis of malignant peripheral nerve sheath tumor.

Partial excision of mass was received in the form of multiple grey- pink soft tissue pieces altogether measuring 13 x 12 x 6cm. Hematoxylin and eosin (H and E)-stained sections showed a tumor cells arranged in nested to fascicular pattern which were separated by thin fibrovascular septa (Figure 1 a). The cells were round to oval shaped with moderate amount of clear, vacuolated to eosinophilic cytoplasm. Nuclei were pleomorphic with vesicular chromatin and prominent nucleus (Figure 2 b). Bi and multinucleation with a Wreath-like giant cells were noted (Figure 2 c,d). Occasional large bizarre cells, 1-2 mitotic figure/HPF and patchy necrosis were seen. Scattered brownish pigment laden tumor cells were noted. However, special stain for melanin was negative validated by melanin bleach. 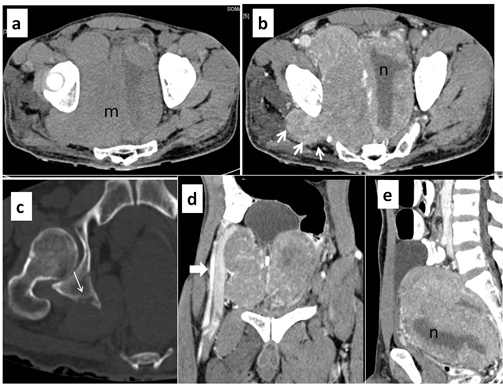 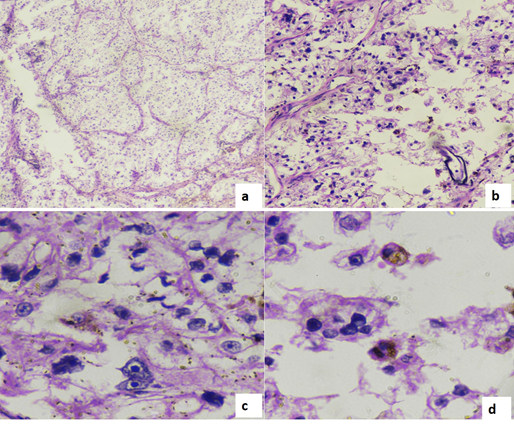 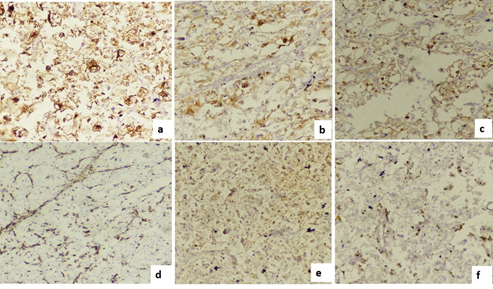 Clear cell sarcoma (CCS) is a rare high grade tumor mainly affecting the tendons of the foot and ankle. Generally reported in females of age 20-40 years.2, 3, 6, 7 The occurrence in pelvis and in a male has been reported only once before this case. However, this CCS presenting as foot drop is the first as per the literature search.8

The diagnosis of clear cell sarcoma is challenging for clinician, radiologist as well as for pathologist. Radiological imaging is essential from surgical point of view. However, the accurate diagnosis is mainly by histological and immunohistochemical analysis. Sometimes this also may not yield satisfactory conclusion wherein a cytogenetic test becomes mandatory.4

Immunohistochemistry markers are crucial for proper diagnosis in CCS in correlation with radiological and histopathological evaluation.4 Like MM, it usually show positivity for S-100 protein, HMB-45 and/or microphthalmia transcription factor, rarely positive for AE1AE3.4 Microphthalmia transcription factor is a melanocytic nuclear protein, has role in tumor growth and melanin production.9 It may also be immunopositive with CD99, MELAN- A, neuron specific enolase and vimentin and immunonegative with cytokeratin, desmin, smooth muscle actin (SMA).4 Usually, intracellular melanin is variable or absent.1, 3, 4 Melanin was absent in this case, confirmed by melanin bleach stain.

Cytogenetic analysis of tumor is essential as CCS shows melanocytic differentiation. Chromosomal abnormalities include t(12;22)(q3;q12) translocation, a cytogenetic hallmark of CCS which may be found in 75% of cases with CCS and has not yet been identified in MM.2, 4, 5, 6, 7, 10 This translocation results in formation of fusion protein ‘EWSR1/ATF1 chimeric transcript’.6 Origin from neuroectodermal tissue which has a property to produce melanin, have been proposed in most of the literature.1, 2, 4, 6, 7

Wide local excision or amputation is the treatment of choice for CCS, provided the diagnosis should get done without delay due to aggressive nature of tumor.2 Owing to higher resistance of CCS to adjuvant chemotherapy, overexpression of ERBB3 in CCS is intent for diagnosis and assessing prognosis of this tumor.7

The prognosis of CCS is very poor and more prone for frequent recurrences and distant metastasis.1, 2, 4, 10 CCS may quickly metastasize to the regional lymph nodes and lungs.3, 7 The 5 year survival rate even after such treatment ranged from 60-67%.4 Tumor size greater than 5cm have a worse survival as at high risk of distant metastasis.1, 2, 3 Postoperative follow up should be considered every three months due to multiple long term recurrences and metastases.1, 2 The extension of the tumor along the sciatic nerve as depicted on CT could be the cause of the foot drop. This patient died 2 months after partial excision.

Clear cell sarcoma is one of the unique case to the best of our knowledge. CCS should be considered in the differential diagnosis of pelvic mass while assessing initial diagnosis of malignant melanoma. Diagnosing CCS is a difficult task for a pathologist. Radiographic aids, histopathology, immunohistochemistry and cytogenetic study play a very important role in diagnosis and to evaluate the extent of the lesion which has an influence on the treatment and prognosis. Complete surgical excision with radiotherapy is the backbone of treatment. Long-term follow-up is imperative for proper management due to high rate of tumor deaths in patients with CCS.