An unusual case of peripheral ossifying fibroma of the hard palate

Peripheral Ossifying fibroma is a slow growing tumor commonly found in the gingival region in females. We discuss an unusual occurrence of peripheral ossifying fibroma on the hard palate in a young male. Clinically the lesion should be differentiated from a pyogenic granuloma, peripheral giant cell granuloma and odontogenic tumors. Definitive diagnosis requires excision and histopathological examination.

Peripheral ossifying fibroma is a slow growing tumor known to occur exclusively on the gingiva. The lesion is more common in females and usually occurs in the first or second decade of life. The most common site reported is the maxillary arch in the incisor cuspid region.1 Here, we report an unusual presentation of this entity on the hard palate in a young male.

A 30-year-old male presented to the Otorhinolaryngology outpatient department (OPD) with a lesion in the hard palate. The patient did not give any history of preceding trauma. The lesion was papillomatous, white and firm, and was located in the hard palate near the upper central incisors. Radiological examination revealed a radiolucent lesion with few radiopaque flecks. A clinical diagnosis of Papilloma was made and the excision biopsy was sent to Pathology department. Grossly, a grey white tissue piece measuring 1.8cmx1.0cmx0.7cm was received. The external surface was irregular and no pedicle was identified. The cut section was grey white, solid and firm in consistency. On microscopic examination, the section showed tissue lined by stratified squamous epithelium which was focally ulcerated. [Figure 1] The underlying stroma showed a poorly circumscribed lesion comprising of fascicles of spindle shaped cells (fibroblasts) with intervening bony trabeculae and dysmorphic round bony particles. [Figure 1, Figure 2 ] There was presence of chronic inflammatory infiltrate and interspersed blood vessels. [Figure 1, Figure 2] Thus based on these features, diagnosis of an ossifying fibroma of the hard palate was rendered histopathologically. On follow up, healing was uneventful and no recurrence was observed. 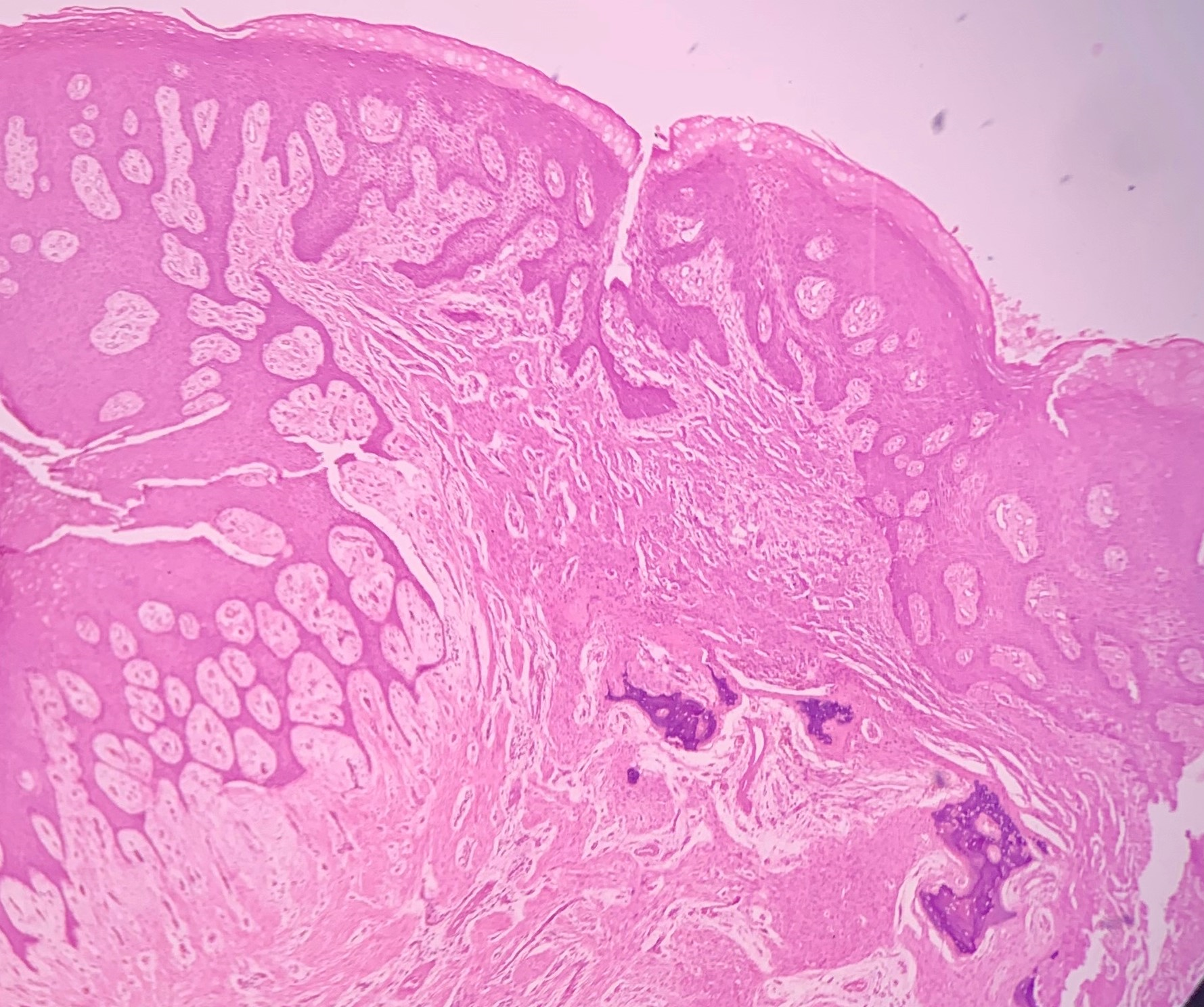 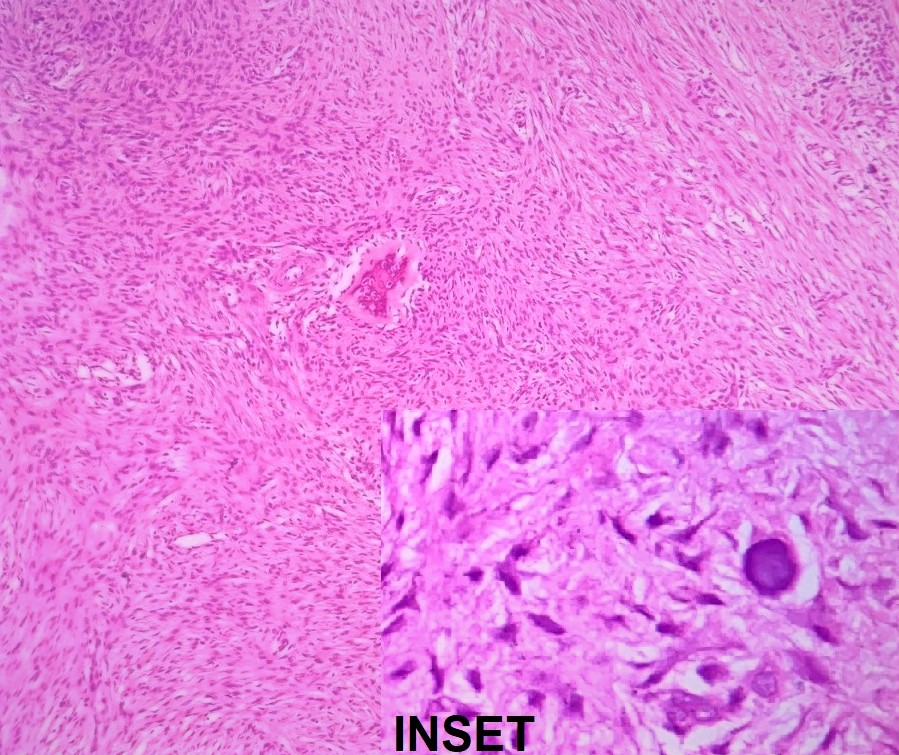 Ossifying Fibroma is classified into central and peripheral types. Central ossifying fibroma arises from the endosteum or the periodontal ligament adjacent to the root apex. It causes expansion of the medullary cavity. The peripheral type characteristically occurs on the soft tissues covering the tooth bearing areas of the jaws (gingiva). Cases occurring on the palate are uncommon and seldom reported.2, 3

The etiology is local irritants like trauma, calculus, ill-fitting dentures, orthodontic appliances, irregular restorations bacterial plaque on teeth, tobacco chewing, hormonal disturbances.6 The pathogenesis is uncertain. Gingival injury leads to an inflammatory hyperplasia of the cells of the periosteum or periodontal ligament (excessive proliferation of mature fibrous connective tissue). This chronic irritation of periosteal and periodontal membrane causes metaplasia of the connective tissue and results in formation of bone/dystrophic calcification.

The current case was reported in a male even though the lesion has a gender predilection for females. In females, exposure of gingiva to progesterone and estrogen present in the saliva and blood stream may be contributory. However, role of hormones in etiopathogenesis has not been proven yet.

The lesion is thought to occur in young adults and is uncommon in old age because of the loss of periodontium with tooth loss as the age advances.7 However, cases have also been reported in elderly population.8, 9

Peripheral ossifying fibroma, a purely soft tissue process has a neoplastic rather than a reactive etiology. It presents as a nodular lesion which is often ulcerated. It may be sessile or pedunculated and varies from red to pink in colour. It is often asymptomatic and therefore present for many years before it is diagnosed.

Treatment is complete surgical excision and aggressive curettage of the adjacent tissues to prevent recurrence. Elimination of any associated irritating factors should also be done. The reported rate of recurrence is 20%.10