Nayak, George, and Goel: Unusual presentation of a common tumor

Unusual presentation of a common tumor

Hepatocellular carcinoma(HCC) is the most common primary malignant tumour of liver. It is 5th most common malignancy in males and 8th most common tumour in females. The patients of HCC may remain clinically asymptomatic or may present with abdominal pain, weight loss, malaise, fever, jaundice or ascitis. HCC is a highly malignant tumor with frequent extrahepatic metastasis. The most frequent site of metastasis is lungs (47%), followed by lymph nodes (45%), bones (37%), and adrenal glands (12%). We present a case of 67 year old male, who presented with progressively increasing swelling in the left occipital region for 2 months. MRI brain showed large lobulated moderately enhancing T2 isointense to hyperintense and T1 hypointense mass lesion in occipital region, causing destruction of occipital bone with large intracranial extradural soft tissue component. Possibilities suggested were Meningioma or metastatic lesion. The scalp mass was excised. The histopathological examination of the excised tissue followed by elaborate immunohistochemistry suggested metastatic hepatocellular carcinoma, which was later confirmed by S.AFP and multiphase CT thorax, abdomen, pelvis which showed multiple liver lesions. Initial presentation of HCC as a subcutaneous lesion is very rare and only very few cases of HCC presenting with primary soft tissue swelling have been reported.

Hepatocellular carcinoma(HCC) is the most common primary malignant tumor of liver. It is three times more common in males than in females. HCC is 5th most common malignancy in males and 8th most common in females.1 The patients may remain clinically asymptomatic or may present with abdominal pain, weight loss, malaise, fever, jaundice or ascites. HCC is a highly malignant tumor with frequent extrahepatic metastasis. The most frequent sites of metastases are lungs, followed by lymph nodes, bones, and adrenal glands.2 Initial presentation of HCC as a subcutaneous lesion is very rare and only very few cases of HCC primarily presenting as a soft tissue swelling have been reported.3

A 67-year-old male presented with progressively increasing scalp swelling in the occipital region for 2 months. The patient initially noticed a peanut sized swelling which increased to the present size in 2 months. There was no history of trauma at the site. There was no history of weight loss or loss of appetite. He had no history of jaundice or prior liver disease. The patient was free of upper and lower GI symptoms. Patient was a known case of diabetes mellitus and the only past surgical history was that of cataract surgery, 10 years back. He was a social drinker. On examination, the scalp swelling was firm, nontender, mobile and hemispherical (13x9cms), located in occipital region in the subcutaneous plane [Figure 1 a]. On general and systemic examination, abdomen was unremarkable with no stigmata of chronic liver disease and there were no signs of focal neurological deficit. DRE showed mild prostatomegaly with indurations. The routine laboratory investigations showed normal CBC (Hb-13g/dl, WBC Count-5.57x109/L, Platelet count- 185x109/L) and liver function tests were normal (S.bilirubin-0.86 mg/dl, S.AST-46 U/L, S.ALT-68 U/L, S.protein-8.2 mg/dl and S.globulin- 4.2 mg/dl). Screening for Hepatitis B, Hepatitis C and HIV were non reactive. X-ray skull showed soft tissue swelling with bony erosion along the outer and inner tables with cortical lucencies in occipital region. Possibilities suggested on X- ray were infective or neoplastic etiology. MRI showed a large lobulated, moderately enhancing T2 isointense to hyperintense and T1 hypointense mass lesion in occipital region, causing destruction of occipital bone with large intracranial & extradural soft tissue component[Figure 1b]. Possibilities suggested on MRI were Meningioma or metastasis. The patient reported to our hospital with FNAC diagnosis of a benign adnexal tumor of scalp. The scalp mass which was highly vascular peroperatively, was excised and sent for histopathological examination, comprised multiple greywhite and yellowish tissue bits aggregating to 4x3cms. The Haematoxylin and Eosin stained sections showed tumour cells arranged in cords, trabeculae and sheets with intervening vascular network.[Figure 2 b] The cells had pale eosinophilic to clear cytoplasm and moderate nuclear pleomorphism.[Figure 2 c] Bony trabeculae were seen entrapped within the tumor [Figure 2 a]. Mitotic activity was brisk (12/10 hpf) including atypical mitotic figures. Patchy foci of necrosis were also seen.

An elaborate Immunohistochemistry (IHC) study was performed. At first, we ruled out Meningioma, cutaneous adnexal tumour, Squamous cell carcinoma-clear cell variant & Basal cell carcinoma. The markers Vimentin, EMA, p63, BerEP4 and CEA (monoclonal) turned out to be negative. Angiosarcoma, a malignant vascular neoplasm, was also ruled out as the IHC markers CD31, CD34, ERG were negative. Now the possibility of a metastatic tumor deposit was evaluated. Negativity for MelanA ruled out Melanoma and Adrenocortical carcinoma while negativity for Chromogranin and CD56 ruled out Neuroendocrine carcinoma. The epithelial markers CK7 and CK20 turned out to be negative. Hence we had differentials of metastasis from primary carcinoma of liver, kidney, prostate and thyroid. Accordingly, the next panel of IHC markers were selected. Surprisingly, the tumor cells showed strong positivity for HSA(HepPar-1) [Figure 2 e], Glypican 3[Figure 2f] and CD 10. Cytoplasmic positivity was observed for TTF-1, but not nuclear positivity. Therefore, primary carcinoma of lung and thyroid were ruled out. PSA also turned out to be negative, which ruled out a primary prostatic carcinoma. PAS stain confirmed the glycogen content of the tumor cells, which was diastase sensitive. [Figure 2 d] So, the possibility of metastatic deposits from Hepatocellular carcinoma was suggested. A correlation with clinical and imaging findings was requested.

Subsequently, investigations revealed serum AFP level of 5058 ng/ml, while serum CEA was normal (1.79 ng/ml). The patient was subjected to Multiphase liver CT with CT thorax, abdomen and pelvis. It detected two main lesions in the liver, first lesion measuring 6.2x5.5 cm in segment VIII (LIRADS category:LR5) and a second lesion measuring 2.5x2cms in segment V(LIRADS category:LR5). Many arterially enhancing subcentimeter foci were seen in the vicinity of segment V lesion (LIRADS category: LR4) and a similar subcentimeter focus was seen in segment II. There was no evidence of cirrhosis or portal hypertension. Multiple destructive osteolytic lesions with periosseous soft tissue were seen in the xiphisternum, D4 vertebral body and L4 spinous process. Hence, the CT findings in correlation with raised Serum AFP level, confirmed that the scalp swelling was indeed a metastatic lesion from Primary Hepatocellular Carcinoma. The patient was started on Sorafenib tablets and Inj. Zoledronic acid and the patient is on regular follow up. 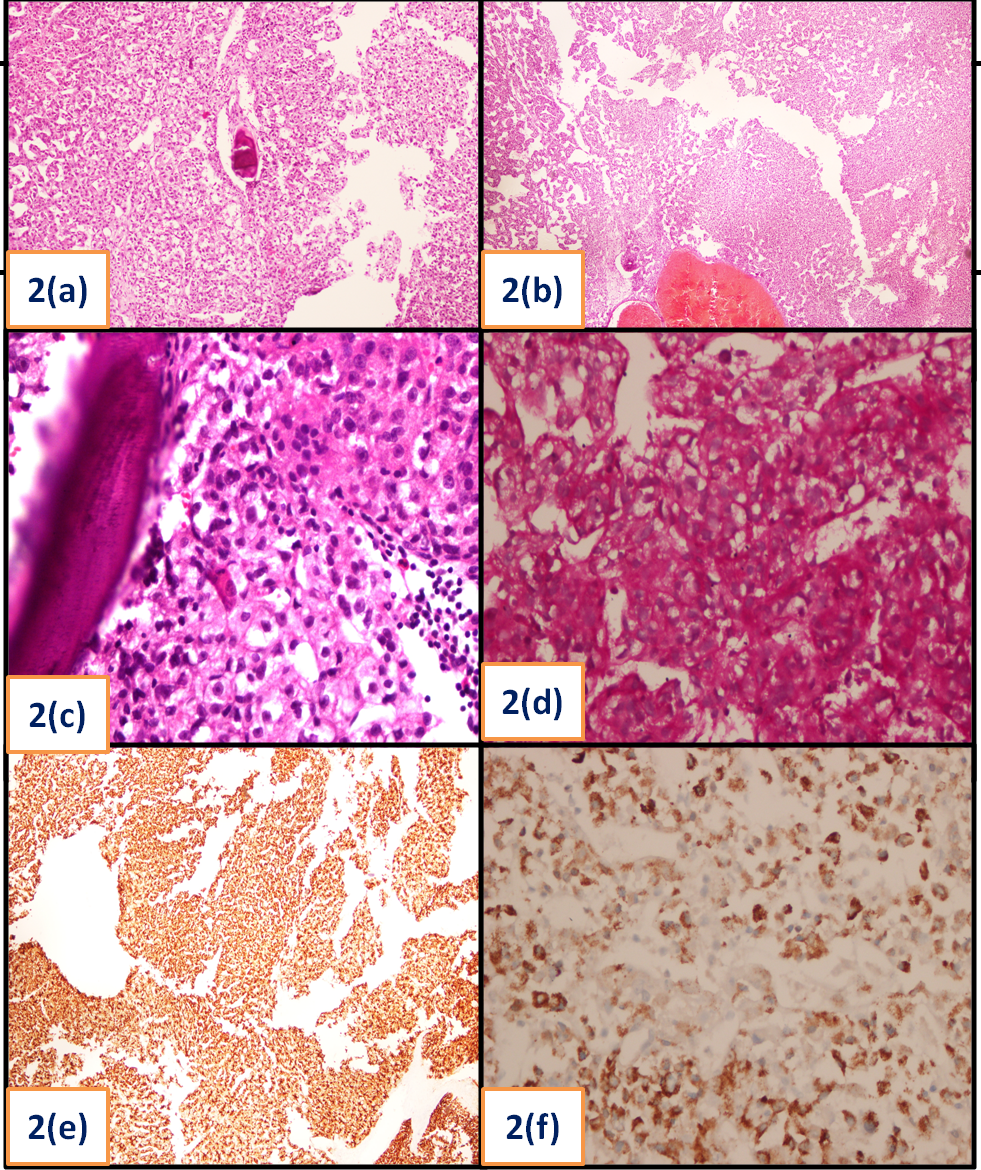 Hepatocellular carcinoma (HCC), a primary malignant neoplasm of liver, accounts for about 80% of all primary liver cancers. Based on Cancer Registries in five Indian urban populations (Mumbai, Bangalore, Chennai, Delhi, and Bhopal), HCC ranks as the fifth most frequent cancer for both genders.4 Most patients present at an advanced stage in their 5th or 6th decade of life.5

HCC is a complex disease entity with multiple possible etiologies, and associated with many risk factors and cofactors. 70% to 90% of patients with HCC have history of chronic liver disease and liver cirrhosis. Other major risk factors include chronic infection with Hepatitis B virus, Hepatitis C virus, alcoholic liver disease, and nonalcoholic steatohepatitis (NASH). Additional risk factors for developing HCC include intake of aflatoxin-contaminated food, diabetes, obesity, certain hereditary conditions such as hemochromatosis and various metabolic disorders.6

Chronic medical conditions such as Diabetes mellitus and obesity increases the risk of HCC. Diabetes directly affects the liver as liver plays an essential role in glucose metabolism. It can lead to chronic hepatitis, non-alcoholic fatty liver, liver failure and cirrhosis. Diabetes is an independent risk factor for HCC.6 Insulin resistance & subsequent increased release of pro-inflammatory cytokines favours development of hepatic steatosis, inflammation & subsequent cancer within the liver.6 Sixty percent of patients above 50 years of age with diabetes or obesity are thought to have NASH with advanced fibrosis.7 Our patient was not a chronic alcoholic, had non-cirrhotic liver and viral markers were also negative. Patient is diabetic and probably diabetes could be the causative risk factor.

The most frequent site of metastasis of HCC is the lung followed by lymph nodes, bone, and adrenal glands.8 Extrahepatic spread at the time of diagnosis is present in only about 5% to 15% of the patients.9 The metastases in HCC occur via blood vessels, lymphatics or through direct invasion.10 In a retrospective study by Katyal, CT scans of 403 patients with HCC were reviewed, and the frequencies of metastatic sites of HCC were found to be lungs (55%), abdominal lymph nodes (53%), bone (28%), adrenal glands (11%), peritoneum and/or omentum (11%), and brain (2%). Rare sites of metastases include the rectum, spleen, diaphragm, duodenum, esophagus, pancreas, seminal vesicle, and bladder.11 Initial metastatic presentation as a soft tissue swelling, which was seen in our patient is very rare and only few cases have been reported.

Our patient is on targeted systemic therapy of Sorafenib on last follow up.

Soft tissue metastasis as a primary presentation of Hepatocellular carcinoma is an extremely rare phenomenon and can occur especially in unusual locations. The possibility of metastatic HCC should also be kept in differential, during evaluation for metastasis of unknown primary.

The authors declare that there is no conflict of interest