Pecorella, Manna, Calbi, Omona, and Okello: Bilateral proptosis as an early manifestation of juvenile myelomonocitic leukemia in an African child

Juvenile myelomonocytic leukemia (JMML) is a rare, lethal, clonal hematopoietic stem cell disorder of infancy and early childhood, first classified by WHO in 2001. JMML tends to progress slowly, and children at first often have few if any symptoms.

We report a pediatric case who presented with bilateral proptosis.

A 9-year-old girl presented with a history of bilateral eye proptosis, downward displacement of the globes and visual symptoms of two-month duration. A firm mass was palpable in the superior quadrants of the orbits (Figure 1a). No signs of inflammation were noted. Physical examination revealed neither lymphadenopathy, nor hepatosplenomegaly.

Total leukocyte count was high (20.000/µL), with absolute monocytosis (25%; n.v: 2-8%). Peripheral blood smear revealed the presence of myeloblasts and promonocytes, and dysplastic monocytes, not exceeding 20% of the total leukocyte count (Figure 2a). The blasts did not show the presence of Auer rods. Macrocytic anemia and mild thrombocytopenia were also demonstrated. Lumbar puncture failed to reveal leukemia cells.

An incisional transpalpebral left orbital biopsy measuring 1 x 0.4 x 0.4 cm. was performed. Histological examination showed a solid hypercellular proliferation of monomorphic cells, with little intervening stroma (Figure 1 b). No special stain or immunohistochemistry facility was available at the Hospital laboratory and a tentative diagnosis of leukemic infiltrate was made.

A subsequent bone marrow aspirate biopsy showed hypercellular marrow smears, with 20% myeloblasts (n.v: 5%), and a predominance of early myeloid cells, and dysplastic changes of erythroid precursors and megakaryocytes (Figure 2b), which were suggestive of a myeloproliferative disorder.

a): North Ugandan child presenting with bilateral proptosis; b): A left transpalpebral orbital biopsy was performed for initial diagnosis. Microscopically, the orbital fat tissue is heavily infiltrated by a round, small cell population. (Hematoxylin-eosin, 20 X) 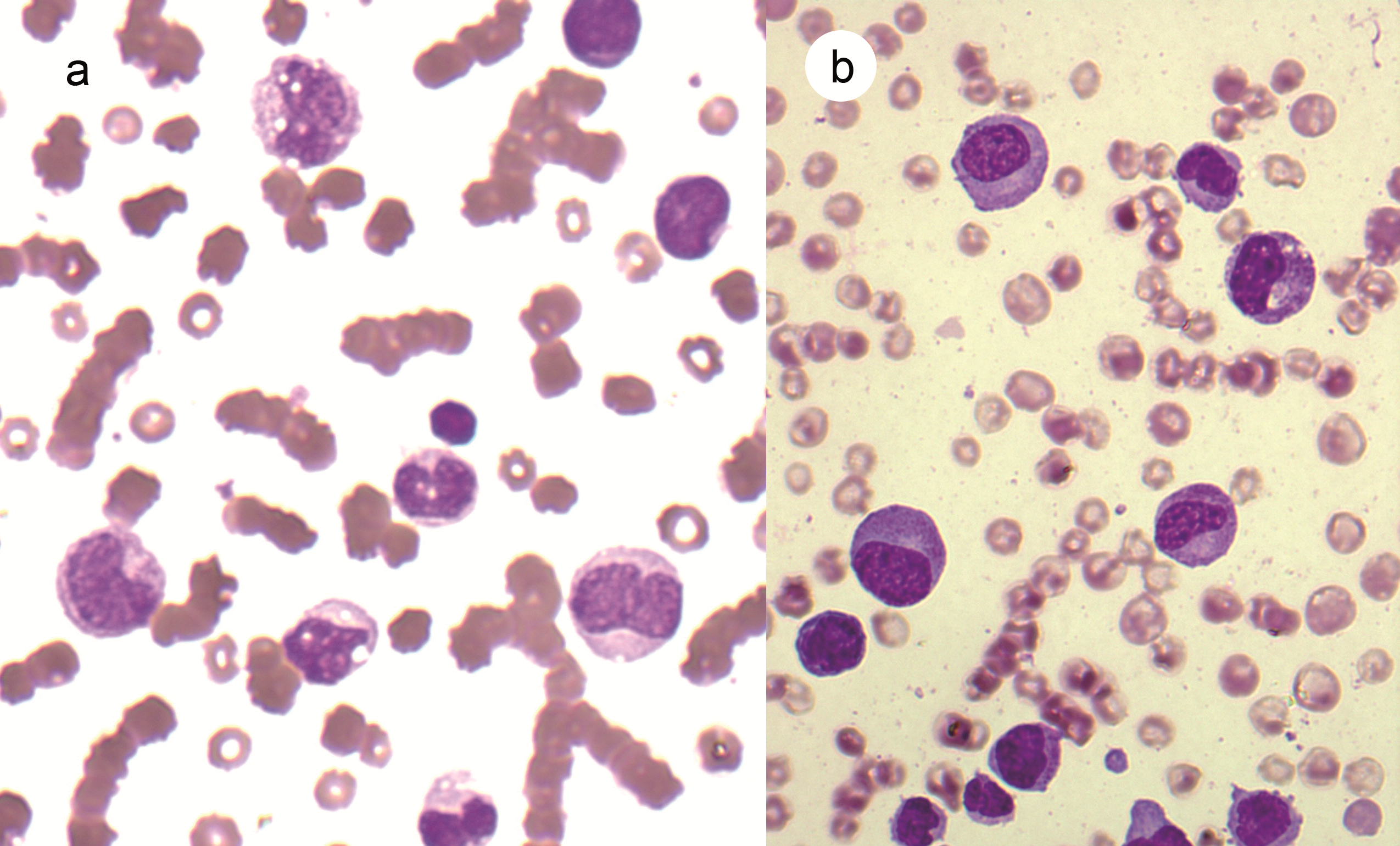 Peripheral blood monocytosis and the dysplastic cell changes observed in the bone marrow aspirate, coupled with the histological features of hematopoietic malignancy in the orbital biopsy favored the diagnosis of JMML and the child underwent palliation chemotherapy for 1 month using Oncocarbide and Cytarabine.

Two months after the initial diagnosis of JMML, she returned to the Hospital complaining urinary incontinence and lower limb fatigue. A restaging bone marrow biopsy showed hypercellular marrow, with a predominance of myeloid cells and blasts with Auer rods. Circulating blasts were present on a peripheral-blood smear. Progression to terminal acute myelogenous leukemia (AML) M0-M1 was diagnosed.

JMML is presently classified as a combined myeloproliferative/ myelodysplastic disease by the WHO and affects children mostly aged 4 and younger. It accounts for less than 3% of all childhood hematologic malignancies.1 Despite appropriate chemotherapy treatment, median survival in USA is approximately 24 months. Stem cell transplantation is the only curative treatment, with about a 50% survival rate. The risk of relapsing within 5-years after transplant has, however, been recorded as high as 50%.1

Since about 10% of patients are diagnosed before 3 months of age, it is thought that JMML is a congenital condition in these infants.

Morphology of the peripheral blood smear is important for diagnosis, and shows less than 20% blasts and myeloid precursors. Bone marrow aspiration is necessary to rule out AML. Absence of the Philadelphia chromosome is one of the mandatory diagnostic criteria for JMML. Peripheral blood absolute monocytosis (>1000/mm3) is another important diagnostic clue for JMML. Other causes of absolute monocytosis include chronic inflammatory granulomatous diseases, splenectomy, viral infections (mononucleosis), bacterial endocarditis, common infectious diseases in Africa, such as syphilis, brucellosis, tuberculosis, malaria, and leishmaniosis.

Minor criteria for diagnosis include hemoglobin F increase for age, leukocytosis, immature granulocytes, nucleated red cells in peripheral blood, and granulocyte macrophage colony-stimulating factor (GM-CSF) hypersensitivity of myeloid progenitors in vitro. Cytogenetic analysis reveals a normal karyotype in 65% of the cases, and monosomy 7 in 25%, or random aberrations in the karyotype in 10%. Mutation in gene TET2 (coding a protein that controls how many monocytes the bone marrow stem cells make) are however present in 50% of these children. However, JMML is fundamentally a disease of hyperactive RAS genes, as in more than 80% of the JMML cases hyperactivating mutations in RAS pathway related genes can be found. NF1also is one of the genes which plays an important role in the pathogenesis of JMML. About 14% of children with JMML are also clinically diagnosed with NF1, and up to 30% carry the NF1 gene mutation.1

Eye/orbital involvement occurring in the setting of JMML is uncommon, with only 2 such instances reported in the published literature.2, 3

Leukemic cells accumulation in soft tissue or bone is termed as myeloid sarcoma (MS), and occurs in approximately 3% of patients with AML, chronic myeloid leukemia, or, rarely, myelodysplastic syndrome.

Orbital involvement occurs primarily in children, especially in those belonging to nonindustrialised countries.1 It is usually unilateral and may present at any stage of leukemia and even precede other evidence of systemic disease. Orbito-ocular MS at presentation accounted for 18.8% of cases in a reported series of 32 leukemic Ugandan children.4 Low socioeconomic status, depressed CD4/CD8 lymphocyte counts, impaired delayed hypersensitivity skin tests and monocytic leukemia have been considered risk factors for MS. Systemic leukemic features develop within a year in those cases where orbital disease had presented prior to diagnosis of systemic malignancy.5

Proptosis is the most common presenting clinical sign in these cases6 and is due to a combination of leukemic infiltrates, retrobulbar hemorrhage, orbital muscle infiltration and venous blockage.

Only rare cases of bilateral MS of the orbit have been published,6, 7 and none in children with JMML. However, an anedoctical case of bilateral ocular involvement by JMML in a 1-year-old Japanese child, causing blindness was described.2

MS should be considered in cases of childhood rapidly progressive bilateral mass causing proptosis. Furthermore, bilateral proptosis can be a rare but devastating initial manifestation of JMML, and as such, requires urgent and thorogh investigation by an ophthalmologist.