Dhende, Patil, and Jashnani: Spectrum of ovarian tumors in a tertiary care hospital

Spectrum of ovarian tumors in a tertiary care hospital

Background: Ovarian tumors are heterogeneous group of neoplasms with wide range of histopathological patterns. It is one of the leading causes of mortality in females. Often difficult to detect until they are advanced in stage or increased in size as symptoms are vague and insidious. Treatment and prognosis is based upon accurate surgical staging and thorough pathological evaluation.

Materials and Methods: A total 150 cases were studied from June 2014 to May 2017. Their age, clinical presentation and histopathological findings were reviewed and analyzed.

Results: Out of 150 cases of ovarian tumors studied 119(79.3%) were benign, 9 (6.0%) borderline and 22 (14.6%) malignant. Age ranged from 9 to 80 years. The commonest presenting complaint in malignant and benign cases was pain in abdomen and in borderline cases abdominal distension. CA125, CEA and LDH were most commonly raised in 53.8%, 23% and 100% malignant cases respectively. Surface epithelial tumors were 68% followed by germ cell tumors 28% and sex cord stromal tumors 4%.

Ovarian tumors are heterogeneous group of neoplasm with wide range of histological patterns. It accounts for 3% of all cancers in female and is the 5th leading cause of death due to cancer in United States.1 Ovarian tumors are often difficult to detect until they are advanced in size or stage. Hence it is often called as “silent killer”. The treatment and prognosis of the ovarian tumors is based upon accurate surgical staging and a thorough pathological evaluation.

There is increasing trend of ovarian carcinoma in females. The application of current knowledge and techniques would revolutionize the ovarian cancer statistics. This will help large number of women in each year and lead towards the more satisfactory therapy of disease.

This is a retrospective observational study of 3 years duration from 1st June 2014 to 30th May 2017 during which 150 cases were studied. Their clinical data (age, site, clinical presentation and levels of tumor markers), radiologic findings and gross appearance were obtained from the surgical histopathological record section of the institute. Formalin fixed paraffin embedded tissue sections stained with Hematoxylin and Eosin was retrieved and reviewed. Immunohistochemistry was performed in borderline and malignant cases.

Out of 150 ovarian tumors, 7 (4.6%) cases detected incidentally out of which 6 women detected at the time of routine antenatal ultrasonography checkup and one detected at radiological workup for cholelithiasis. Out of these 7 incidentally detected cases 6 were benign tumors and 1 was borderline serous tumor. Of these 6 benign tumors 4 were benign serous cystadenoma, 1 benign mucinous cystadenoma and1 was mature cystic teratoma.

CA125, CEA and LDH were raised most commonly in malignant cases. The highest value of CA125 in present study was 2075.7u/ml which was seen in 1 case of malignant serous cystadenocarcinoma. CEA was markedly raised in 2 cases of mucinous cystadenocarcinoma and 1 case of yolk sac tumor. AFP was raised with levels more than 10,000 in 4 cases out of which 3 cases were Yolk sac tumors and 1 case was immature teratoma. 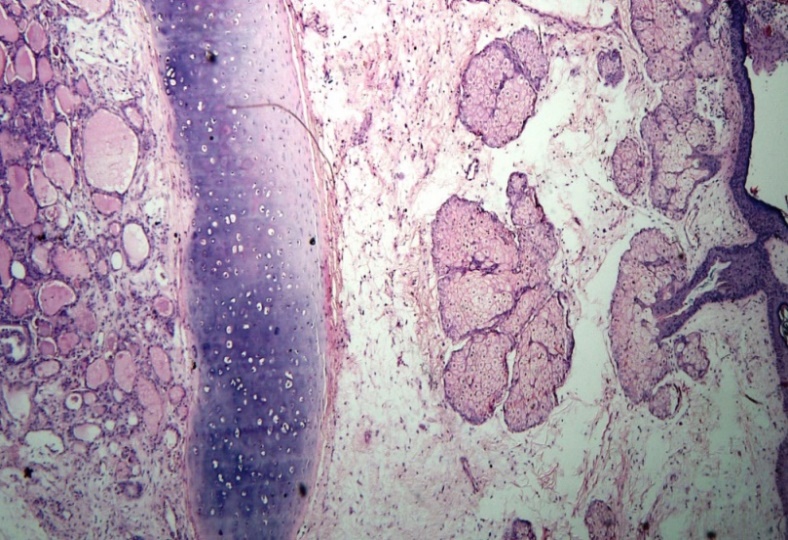 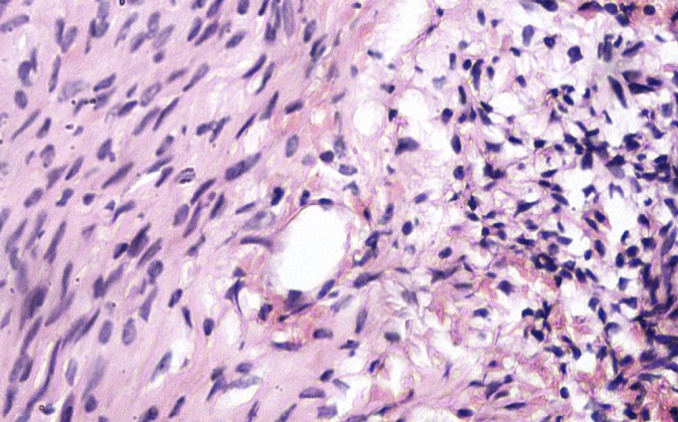 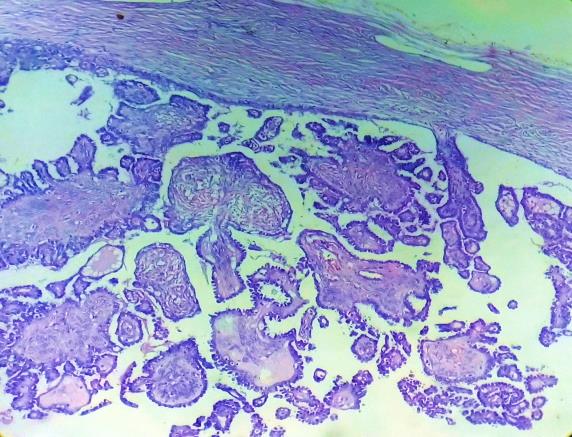 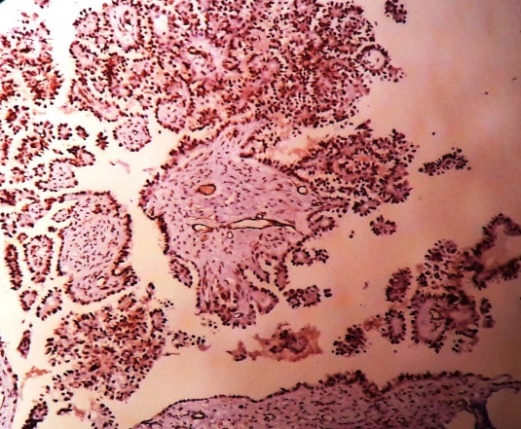 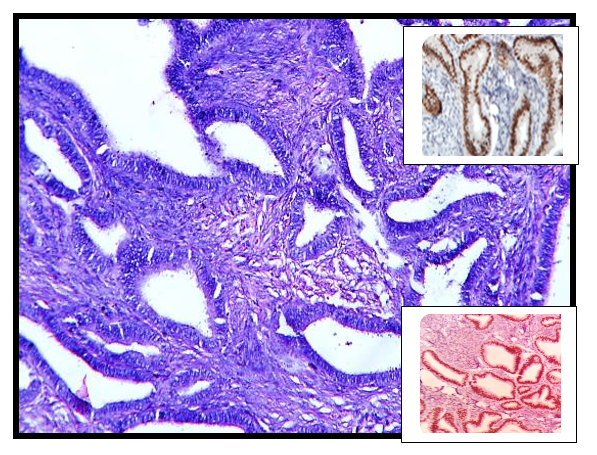 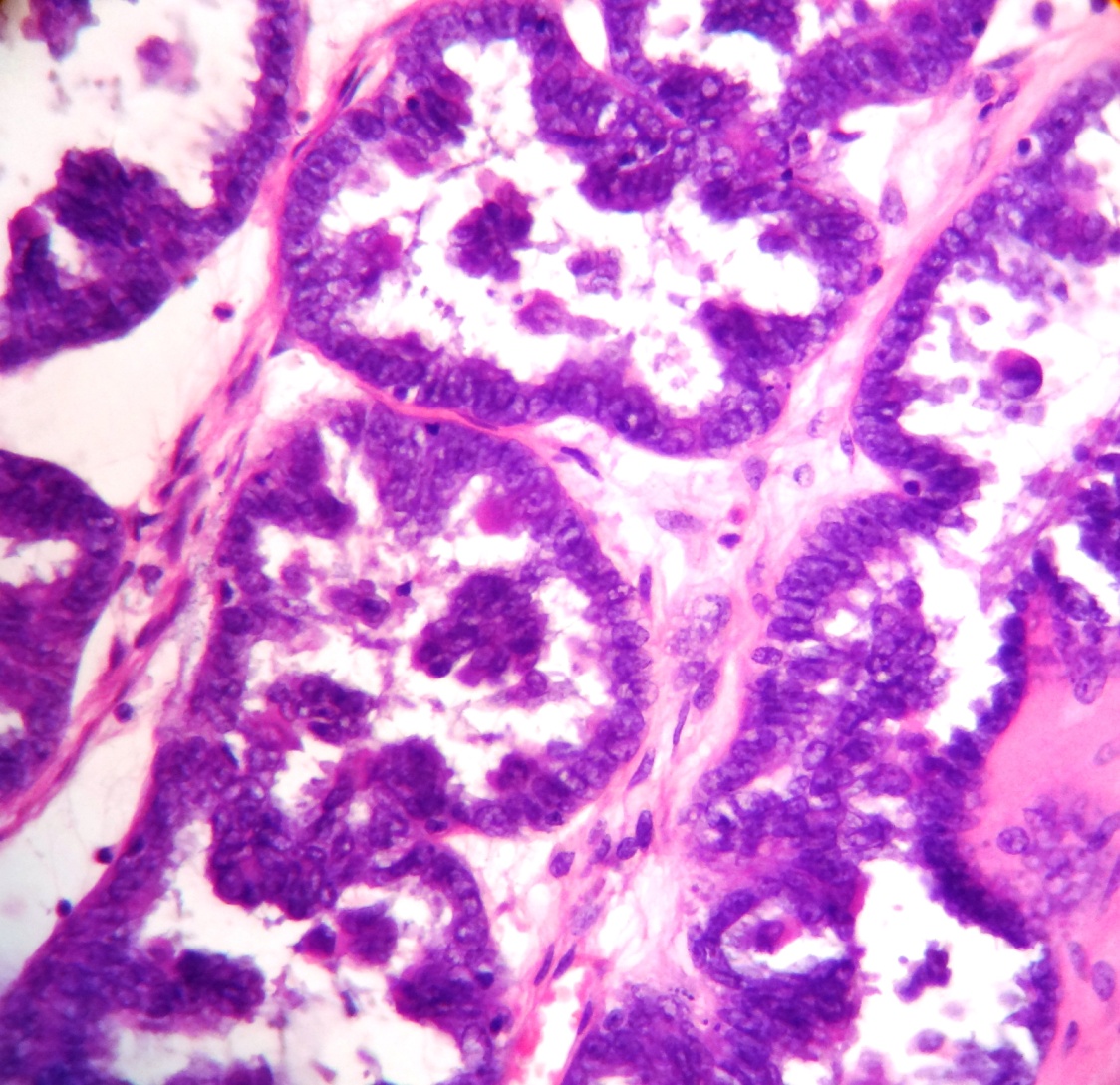 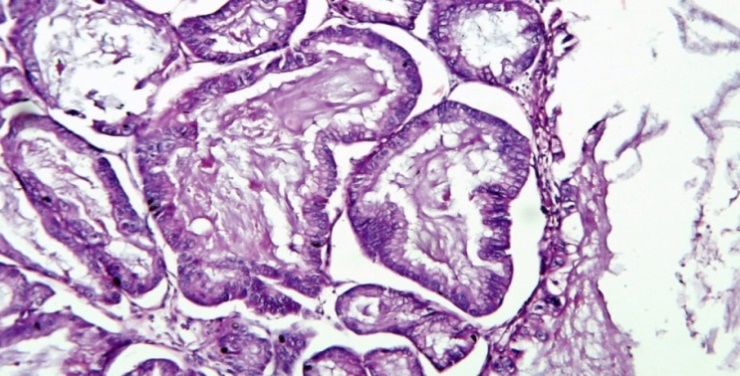 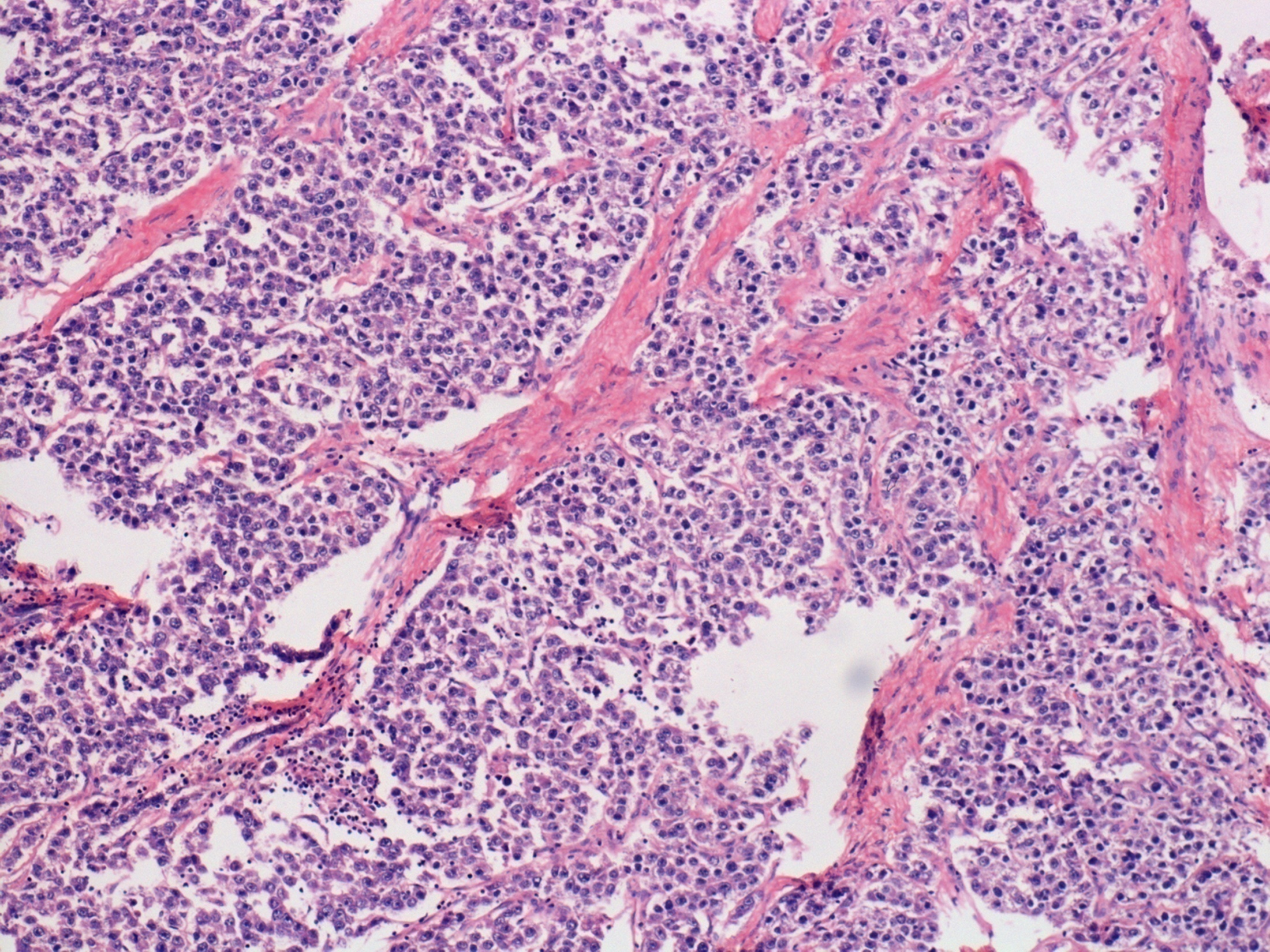 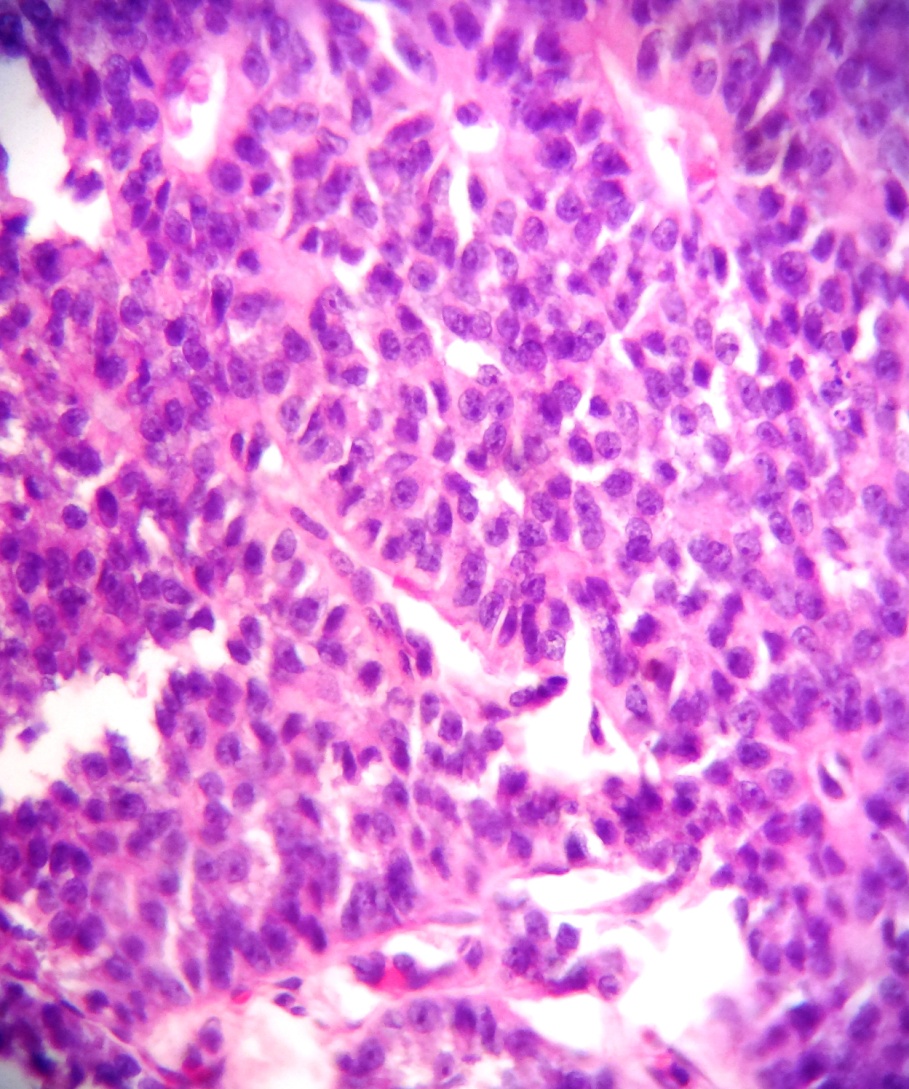 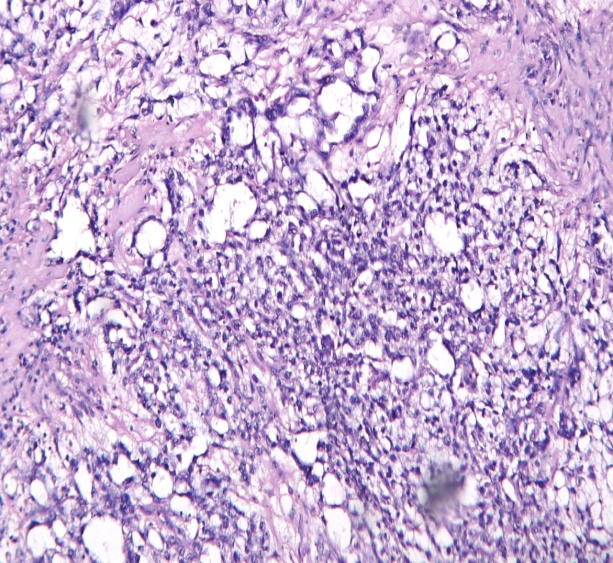 Comparison study of frequencies of benign, borderline and malignant tumor

The frequency of malignant tumors in present study was 14.6% which is lower than frequencies of the same in studies of Agarwal et al,2 Mondal et al4 and Bhagyalaxmi et al3 which is a good sign.

The most common borderline ovarian tumor in present study is borderline mucinous tumor i.e. 55.5% which is similar to Agarwal et al2 and Bhagyalaxmi et al3 but in study of Mondal et al 4 borderline serous tumor was most common.

In present study abdominal pain was the most common presentation in 77.2% malignant cases. This finding is very well similar to which is comparable with Wasim et al,6 Mankar et al7 and Amreem khan et al.8

In present study the sensitivity and specificity of CA125 and CEA was comparable to the study conducted by Chen et al9 however, it was not similar with the study of Agarwal et al.

The AFP was 100% specific for yolk sac tumor.

In present study right side preponderance was seen which is similar to Pilli et al.10 There was no side (right or left) preponderance seen in study of Agarwal et al.2

It can be seen from present study that the size is not an important factor in assessing the nature of tumor similar to Agarwal et al2 as size range in benign, borderline and malignant tumors were along similar size.

We encountered a rare case of mature cystic teratoma with foci of poorly differentiated carcinoma in a 72 years old female. This tumor was of size 20cm, solid cystic in nature. Serum CA19.9 was markedly raised. IHC marker pan CK7 was positive, CK20, WT1, PAX-8, synaptophysin were negative. The incidence of malignancy arising in a mature cystic teratoma is 1-2% as per Chaudhry et al.11 Another rare case of borderline mucinous tumor with neuroendocrine carcinoma component was encountered in this study.

In present study the commonest age group affected in malignant cases was 11-20 years which is in discordance with other studies in literature but it is comparable with Vaidya et al5 in which 21-30 years was commonest. This could be due to higher number of germ cell tumors.

WT1 showed cytoplasmic positivity in 75% cases of serous tumors which is similar to study of Kriplani and Patel et al.12

The present study was undertaken to evaluate the various histopathological spectrum of ovarian tumors, their commonest age group distribution and histopathological and clinical features correlation. Ovarian tumors exhibit wide range of histopathological spectrum in our institute. The percentage of surface epithelial tumors constituted the greatest proportion followed by germ cell tumors. Serous cystadenoma was commonest followed by mature cystic teratoma in benign cases. Borderline mucinous cystadenoma was commonest in borderline. In malignant cases mucinous cystadenocarcinoma was commonest. Overall middle age is commonly affected. Patients commonly presents with pain in abdomen. Radiology has less specificity and but is complementary for diagnosing few malignant cases. Biochemical markers were contributory to distinguish benign and malignant cases. The size of the tumor is not related to the nature of the tumor but presence solid elements makes malignancy more likely.

Common problems encountered while diagnosing tumors of epithelial origin especially serous and mucinous tumors is that tumor may include benign and borderline components in few areas and malignant counterparts in other areas. Hence, extensive sampling and sampling from solid areas as well as from mural nodules is very important. Also, many times, it is difficult to differentiate primary mucinous carcinoma from metastasis especially from appendix, intestine stomach, cervix, pancreas etc. in such situation IHC especially CK7, CK20, CDX2 and B- catenin along with clinical details plays important role.