Aims and Objectives: To study the histopathological patterns of non-infectious granulomatous dermatoses and to correlate with clinical features.

Materials and Methods: It is a retrospective study for a period of 5 years at a tertiary care centre in central Karnataka.

A retrospective study of skin biopsies was undertaken at the department of pathology in a tertiary care centre of central Karnataka for a period of 5 years from January 2015 to December 2019. All skin biopsies of inflammatory nature obtained by punch or excisional biopsy were fixed with 10% formalin and submitted for processing after gross examination. The sections were stained with routine hematoxylin and eosin (H&E) stain followed by special stains wherever required. Clinical history and relevant data were recorded. All cases were examined in detail and histopathological features of granuloma, location of granuloma, dermal and epidermal changes were noted. Descriptive statistical measures like percentages and proportions were utilized to present the data.

Granuloma annulare was diagnosed in 17 (50%) cases with a female predominance. The most common location was over extremities. Microscopically these cases showed periadnexal lymphohistiocytic infiltrate, palisading of histiocytes with foci of degenerated collagen (necrobiotic areas) and mucin degeneration.(Figure 1, Figure 2)

Two cases(6%) of xanthoma and one case of xanthelasma(3%) were identified in the age group of 31-40 years. Clinically these lesions were located near the eyelids and histologically showed xanthogranulomas comprising of foamy histiocytes admixed with lymphocytes and occasional multinucleate touton type of giant cells. These cases were evaluated for altered lipid profile but all parameters were within normal limits.

Annular elastolytic giant cell granuloma was seen in 14% of the total cases studied. Microscopy showed scattered ill-defined granuloma along with foci of necrobiosis and palisading histiocytes surrounding the degenerating collagen fibres. Elastophagocytosis was identified in our cases (Figure 3, Figure 4).

Tattoo granulomas were noted predominantly in male patients and seen in 9% of cases studied. These cases showed a mixed inflammatory reaction in the dermis composed of epithelioid granuloma. Tattoo pigments were seen within multinucleate giant cells and in extracellular areas of dermis.(Figure 5). 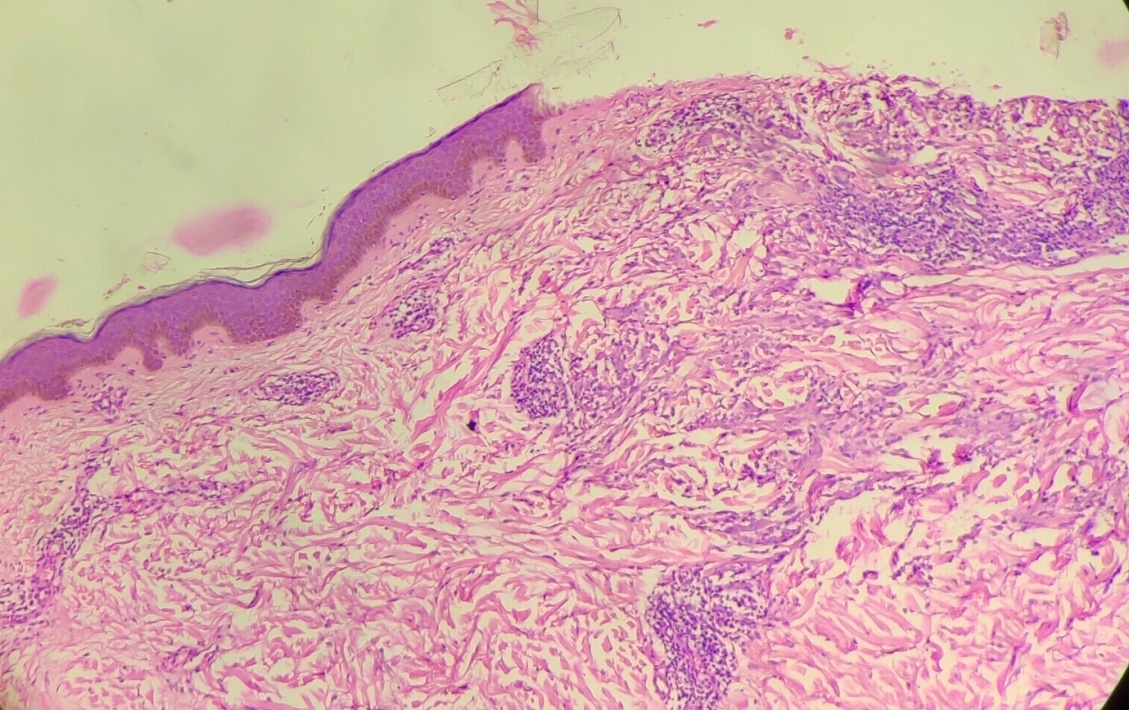 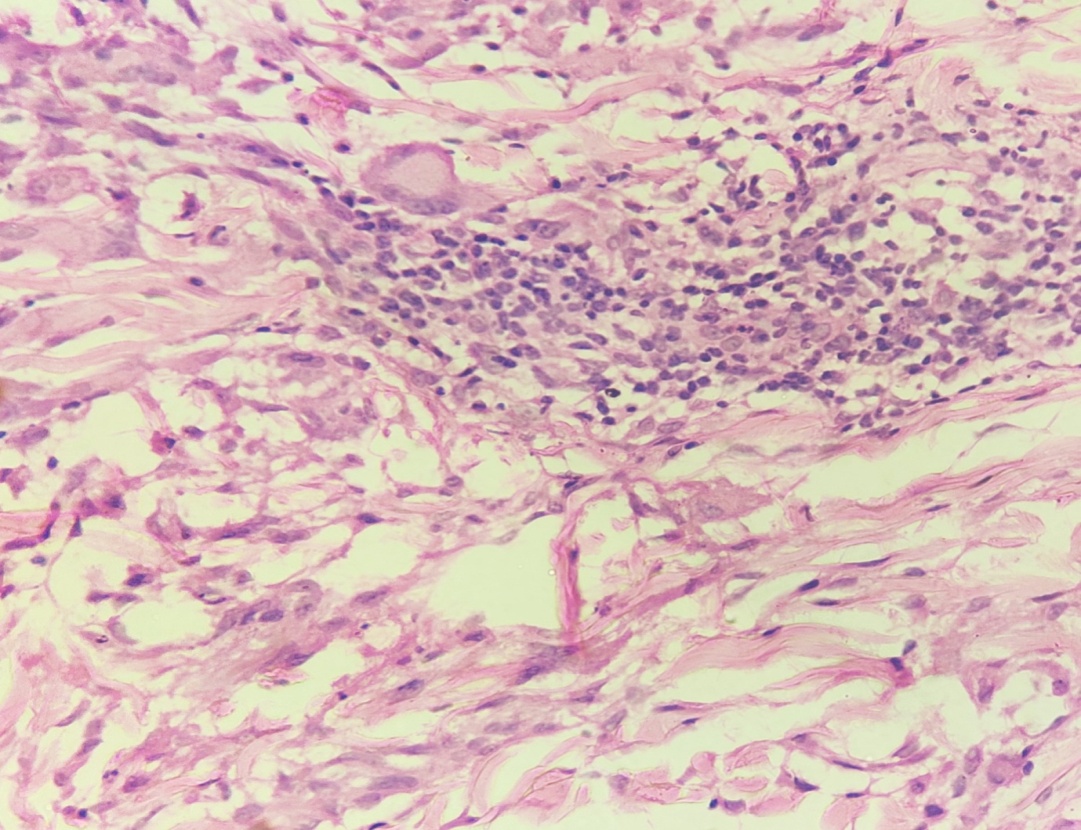 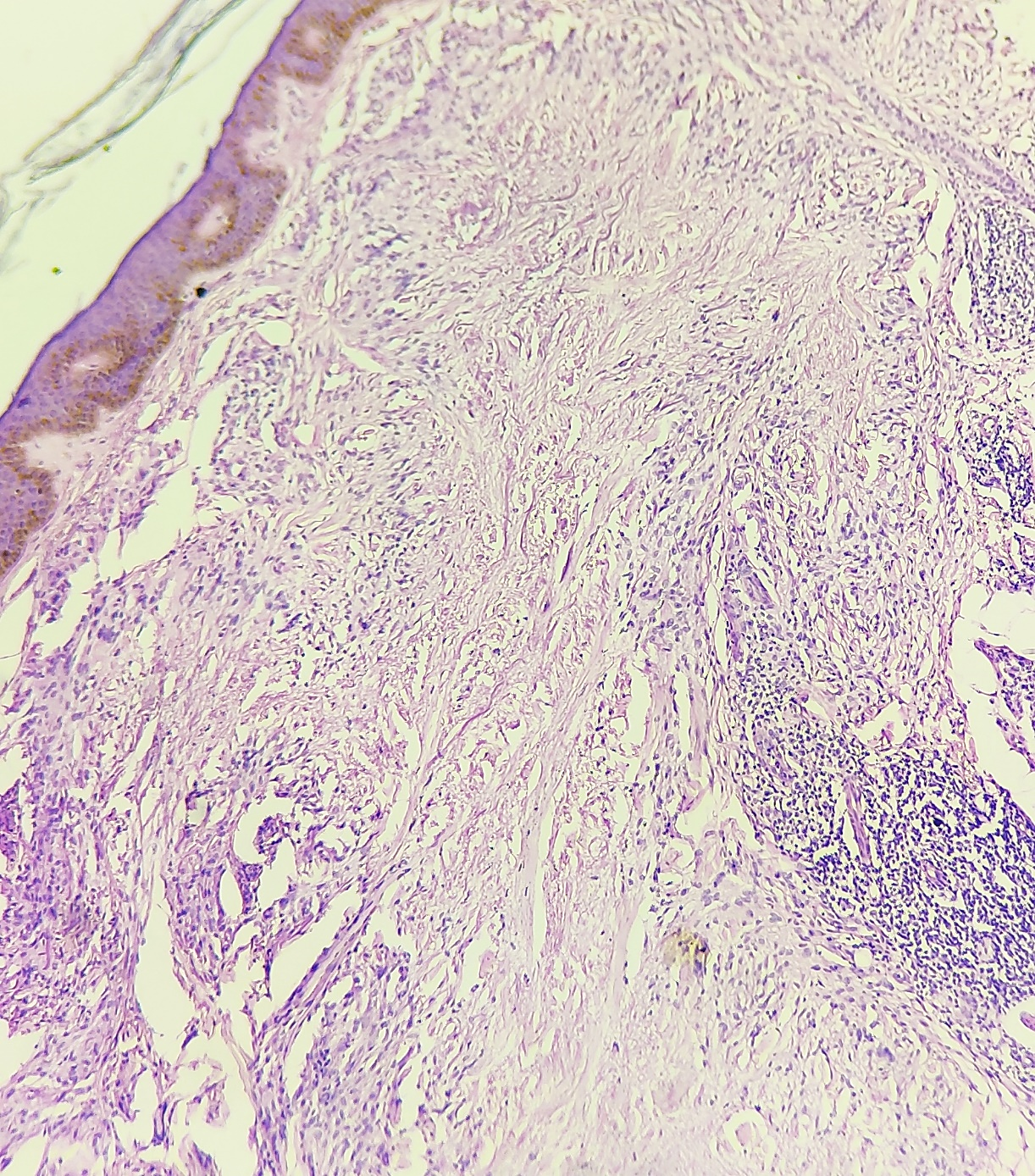 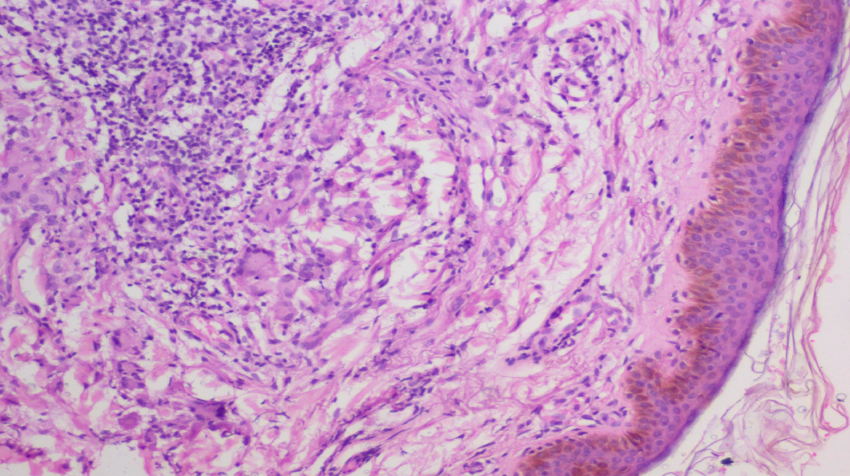 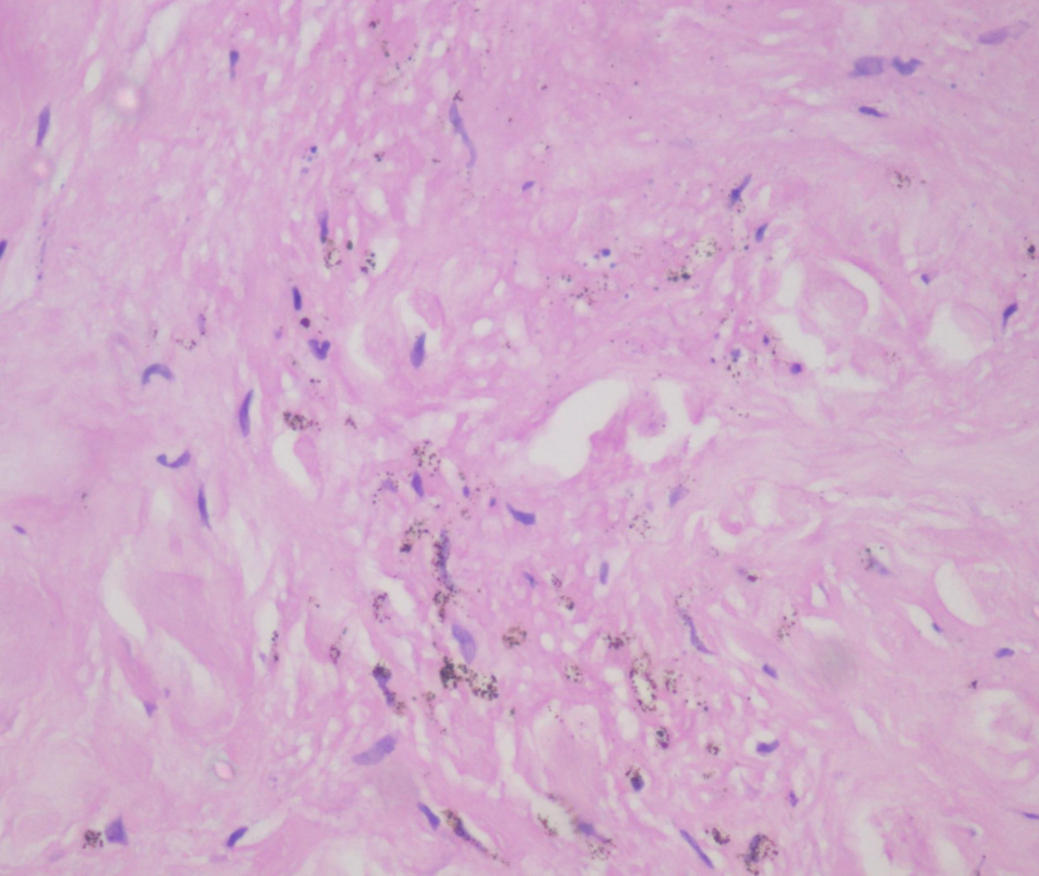 Non-infectious granulomatous disorders of skin encompass a large group of disorders which shows overlapping clinical and histological features. The diagnosis and counselling patients regarding their prognosis become challenging. This study has documented the histopathological profile of non-infectious granulomatous dermatoses in a tertiary care centre. The sex distribution pattern revealed that most of the patients were females (71%) with male to female ratio being 1:2.4. Whereas in study conducted by Mohan et al. and Grover et al. there was male predominance.3, 4

Annular elastolytic giant cell granuloma was noted in 14% of 34 cases in our study, which is similar to the study done by Grover et al where it constituted 10.3% of 29 cases. It was characterized by elastin degeneration, multinucleate giant cells and elastophagocytosis which were similar to the histopathological finding in a study done by Arora s et al.8

Xanthogranuloma was noted in 9% of cases in our study whereas in study conducted by Mohan et al it was identified in 4.2% of 71 cases. Both Xanthoma and Xanthalesma are characterized by localized infiltrates of the lipid-laden macrophages appearing on various areas of the skin or visceral organs. In our study these lesions were predominantly seen around eyelids. It may represent as a localized idiopathic cutaneous phenomenon or maybe a sign of systemic hyperlipidemia and thus knowing the lipid profile of the patient is important to exclude systemic disease.10

A miscellaneous group which may show rarely granulomatous lesion like perforating folliculitis was found in three cases which showed dilated infundibulum filled with keratin along with foreign body granuloma.

In our study, histopathological features of various non-infectious granulomatous dermatoses were studied. Due to the limited incidence of these lesions, not many literatures were available to compare the incidence, demographic factors and histopathological variation among patients in different parts of the world.

Granulomatous skin lesions have various modes of presentation with both infectious and non-infectious etiology. There is a significant overlap in morphology and clinical presentation and so it is necessary to highlight or observe subtle findings which help in differentiating between various granulomatous dermatoses. Morphology alone is seldom specific and cannot be used as a diagnostic tool for identification of specific diseases. Thus, adequate clinical data and work up in the combination of pathological resources with ancillary techniques can help in elucidation of specific diagnosis and better management of the patients.