Background: Gastric carcinomas rank 5th among all the cancers in India. The incidence increases with age and peaks during 5th to 7th decades. The most common location is gastric antrum followed by the lesser curvature. Her2 neu expression is reported as a frequent molecular abnormality in gastric adenocarcinomas associated with poor prognosis.

Objectives: The main aim was to study clinicopathological parameters of gastric carcinomas and study expression of HER2 in gastric adenocarcinomas.

Materials and Methods: This was a 4-year cross-sectional observational retrospective and prospective study of 47 cases of gastric carcinomas. The clinical profile and pathological features were studied. HER2 expression in gastric adenocarcinomas was scored according to Hoffman system and its association with age, gender, histopathological type, grade was studied. FISH was done in cases of equivocal HER2/Neu expression.

Results: Of the total 47 gastric carcinomas, it was most commonly found in antrum. Mean age of presentation was 59.4 years with male: female ratio of 1.4:1. Of total 47 adenocarcinomas, 22 were tubular, 4 cases each of papillary and mixed adenocarcinoma and 17 were poorly cohesive carcinoma. There were 5 cases of grade I, 27 grade II and 15 grade III carcinomas. HER2 positivity was seen in 10 cases, 5 were equivocal and 32 were HER2 negative. We found statistically significant correlation between HER2 expression with histopathological grade (P=0.003) and age (P=0.014).

Conclusions: Tubular adenocarcinoma was the common subtype and antrum was the commonest location. HER2 expression was significantly associated with grades and age in cases of gastric adenocarcinomas. This study helped us to know the trends of gastric carcinoma in our region. Use of immunohistochemistry and fluorescent in situ hybridization techniques additionally supports the use of targeted therapeutic modalities.

Gastric carcinoma is the 5th most frequently diagnosed cancer around the world.1

Gastric carcinoma tends to develop slowly over many years. Its incidence is known to increase with age and the peak incidence occurs at 5th to 7th decades.2

A nationally representative survey in 2010 found that a total of 556400 deaths occur due to cancer in India and the mortality rate of stomach cancer is 12.6% in India.3

It has been reported that the survival rates were lower among smokers, alcohol drinkers, obesity and people who have the symptom of esophageal acid reflux and consume pickled, salty and smoked food.1, 3

Understanding the association between prognostic factors and the survival rate for Gastric carcinoma is helpful to improve treatment efficacy.

HER2/Neu overexpression is a predictive of response to therapy.7

HER2/neu status is primarily evaluated to determine patient eligibility for anti-HER2/neu therapy. Hence, inhibitors of HER2 membrane signals through anti-HER2/neu antibodies, that is trastuzumab (Herceptin) or lapatinib are associated with improved disease outcome in patients with primary or metastatic carcinomas.9

This study was undertaken to evaluate prognostic factors of gastric carcinoma using WHO 2019 classification along with IHC expression of HER2/Neu in all cases of gastric adenocarcinomas.

This study included 47 cases of gastric carcinoma studied for a period of 4 years from 2016 to 2020. Patient’s clinical details, histopathological examination (Using CAP protocol 2020), IHC for HER2/ Neu were studied.

In retrospective cases, paraffin-embedded blocks were retrieved from the departmental archives. Fresh slides will be prepared and stained with hematoxylin and eosin.

Immunohistochemistry (IHC) for HER2/Neu (C-erb-2 Oncoprotein, Dako A0485) was carried out and the results were recorded as positive, negative, and equivocal according to the staining patterns (ToGA trial using Hoffman et al 2008).11

Fluorescence in situ hybridization (FISH) was carried out in HER2/Neu equivocal cases. The slides were analyzed with a Leica DM2000 microscope equipped with an x1000 oil immersion objective, appropriate fluorescence filters, and Cyto Vision imaging software.

HER2 and CEP17 signals were counted in 20 cells after scanning each tissue core for an area with an increased number of HER2 signals.

The Kaplan-Meier method was used to calculate rates of overall survival.

The most common endoscopic findings were ulceroproliferative growth in 37 cases (78.7%) (Table 2)

Of these 4 major resection specimens of gastric adenocarcinoma, lymph node dissection was done in all 4 cases of which 02 (50%) cases showed lymph node involvement by tumor. Of these 4 cases, 02 (25%) cases showing lymphovascular invasion.

There were no significant difference between HER2/Neu positive and negative patients in terms of gender, tumor site, histological type of the tumor, tumor extension, depth of invasion and metastatic site. (Table 5)

Comparison of HER2/Neupositivity and histological grade with other studies

We did Fluorescence in situ hybridization (FISH) in 5 equivocal cases of immunohistochemistry. These equivocal cases of HER2/Neu showed HER2/CEP17 ratio < 1.8, that is not amplified or negative (ASCO/CAP guidelines for HER2) on FISH study. 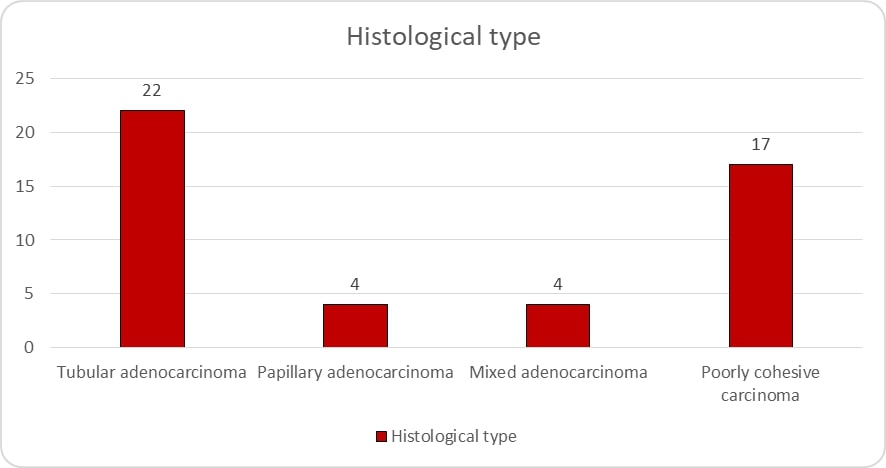 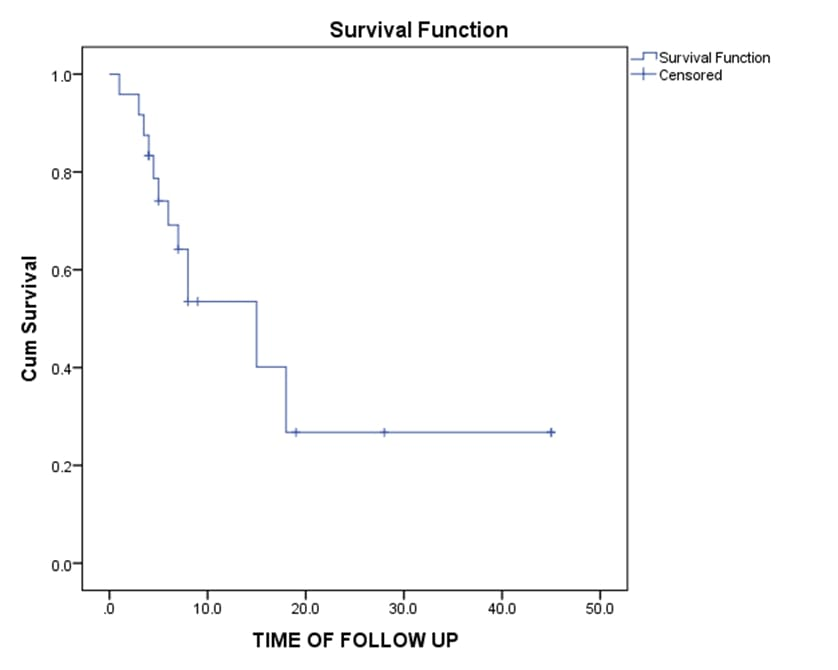 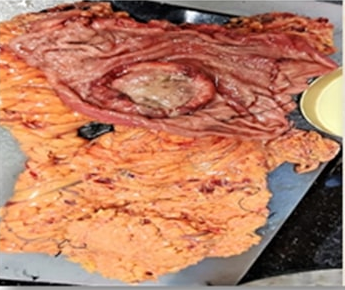 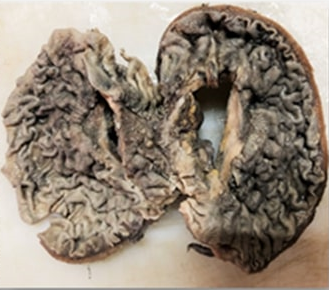 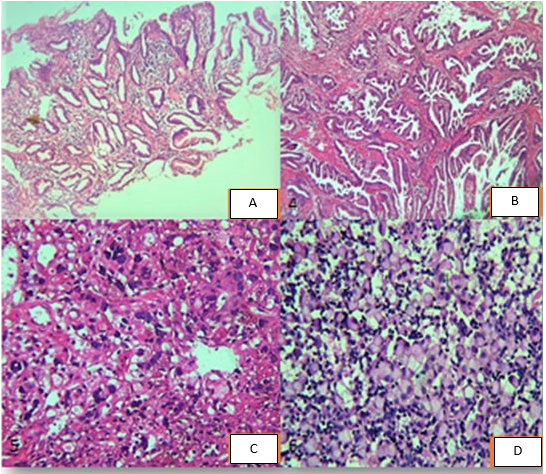 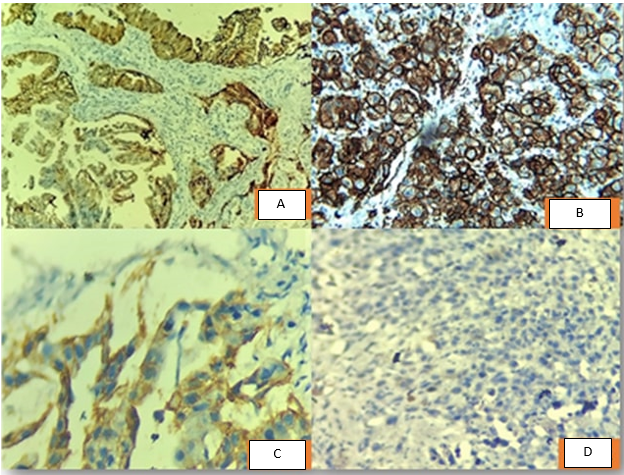 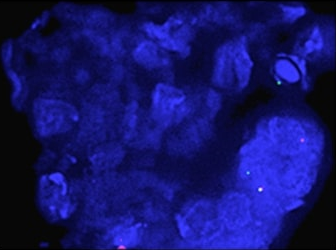 The peak incidence of gastric carcinoma is 50 to 70 years.2

The present study shows the most common histological type as tubular adenocarcinoma in 46.8% of cases which correlates with Abdel-Salam et al. (2018).18 The second most common category was poorly cohesive carcinomas including signet ring cell type as 17 (36.2%) cases.

The differences between HER2/Neu expression in breast and gastric carcinomas are that in breast cancer, there is a predominantly circumferential membranous distribution of the antibody in the neoplastic cells, no intratumoral heterogeneity and variability in anatomical location; whereas in, gastric adenocarcinomas the staining is mostly incomplete, predominantly basolateral (“U”-shaped) or lateral (parallel lines), intratumoral heterogeneity, and incidence of HER2 expression in gastric cancer with anatomic location is variable. Gastric carcinomas are more frequent in the proximal stomach, esophageal-gastric junction than in the distal stomach.20

Due to the heterogeneity of tumors in gastric adenocarcinoma, the expression of HER2/Neu is variable and cannot be used as a sole criterion for targeted therapy similar to breast carcinoma cases.

Hence, we recommended to do an HER2/Neu study to be done preferably on resection specimens rather than biopsy slides and needs more sampling of tumor tissue for better evaluation.

Our study provides an insight to the various prognostic factors including HER2/Neu expression for targeted and personalized therapy in gastric adenocarcinomas.