Pitfalls in cytological diagnosis of mucinous carcinomas of breast

Introduction: Mucinous (colloid) carcinoma (MC) of the breast is relatively rare and accounts for 1-6% of all breast cancers. Traditionally, pure mucinous tumors and mixed infiltrating ductal carcinomas with a mucinous component have been described. Pure mucinous carcinoma of the breast has a favorable prognosis than the mixed variety noted in several studies. The common age of presentation is the postmenopausal group. Cytological diagnosis of these tumors is challenging.

Materials and Methods: A retrospective study was conducted at our institute. 22 cases consisting of both mixed and pure mucinous carcinomas diagnosed by cytology and verified on histopathology between January 2007 and November 2015 were included in the study. All cytology and histopathology slides were reviewed.

Conclusion: The distinction between pure and mixed mucinous carcinoma is important, because patients with the former type have a much favorable prognosis, with a low propensity for lymph node and distant metastasis. Cytopathological identification of patients with pure mucinous carcinomas may be performed only in a limited number of cases. The various differential diagnosis should always be kept in mind while dealing with lesions associated with mucin. However the age of presentation, clinical features and radiological findings can help to further categorize the various mucinous lesions.

Mucinous (colloid) carcinomas (MCs) of the breast are comparatively rare and account for 1-6% of all breast cancers. These tumors tend to have a low to intermediate nuclear grade, however tumors with high nuclear grade and mucin production as best described as invasive ductal carcinomas-no special type (IDC-NST) with mucin production (Mixed IDC-NST and special type).1, 2, 3 MCs of breast have a better prognosis as compared to the mixed variety. WHO further categorizes MCs into type A (hypocellular with large amounts of extracellular mucin) and type B (hypercellular with larger epithelial clusters showing neuroendocrine differentiation) subtypes. The common age of presentation is the postmenopausal group.2, 4, 5 Cytological diagnosis of these tumors is challenging. Cytological diagnosis of MC is rendered based on a combination of abundant extracellular mucin and certain characteristic morphological features. The aspirate generally yields a jelly like mucinous material.6, 7 The background of pools of mucin with scattered bland tumor cells aids in identification of MC.

A retrospective study was conducted at our institute. 22 cases consisting of both mixed and pure mucinous carcinomas diagnosed by cytology and verified on histopathology between January 2007 and November 2015 were included in the study. Fine needle aspiration (FNA) was performed using 23 gauze needle and a 10 ml syringe. Smears were fixed in 95% ethanol for Papanicolaou stain. Air dried smears were fixed in 100% methanol for Giemsa stain. All cytology slides were retrieved and reviewed. Histopathology slides and blocks were also reviewed. 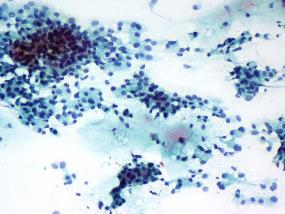 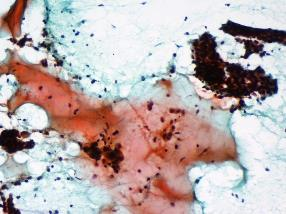 Fine branching capillaries in a background of mucin [Pap x100] 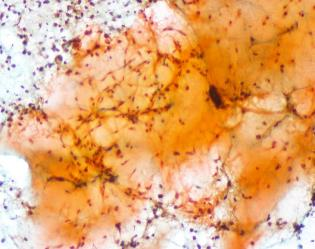 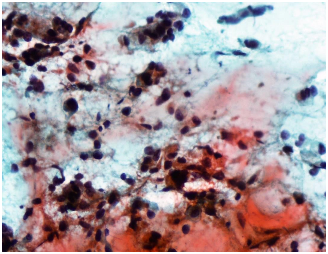 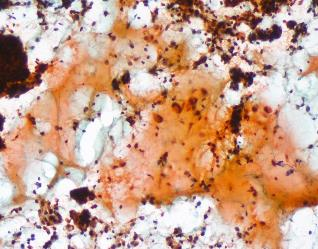 MC is a rare morphological type of breast carcinoma, with better prognosis than IDC-NST. It usually affects elderly women. On fine needle aspiration cytology (FNAC), it is very important to differentiate MC from other mucin containing neoplastic and non neoplastic lesions of breast. The various differential diagnosis are discussed below. [Table 1]

Mucocele-like tumors of the breast were originally described by Rosen in 1986. They occur due to overproduction of mucin from the epithelial cells with obstruction of the mammary ducts. They were described as benign lesions which had markable resemblance to pure MCs. These lesions on cytology show abundant mucin in the background with a few clusters and sheets of benign epithelium lacking nuclear atypia.8, 9 Intact single cells are not present. In contract, MCs show high cellularity, abundant singly scattered and clusters of tumour cells with mild to marked nuclear atypia. A mucinous cyst is characterized by cystically dilated mucin filled ducts often associated with rupture and extravasation of mucin into the stroma.3, 4, 9 However malignancy cannot be excluded solely on the basis of FNAC. Detailed histopathological examination of the surgically excised specimen is often recommended.

It is more difficult to make a definitive diagnosis in mucocele like tumors with concomitant atypical ductal hyperplasia or ductal carcinoma in situ, since the cellular polarity and atypia may be prominent, as in mucinous carcinoma.2, 10

Fat necrosis of the breast parenchyma may be misinterpreted as mucin. There is infiltration of histiocytes, multinucleated giant cells and degenerated RBCs in the intermediate stage of fat necrosis. These hypocellular smears show clusters and singly scattered foam cells with no nuclear atypia.1, 5, 11 Careful interpretation along with radiological and clinical correlation is often helpful.

Myxoid changes in fibroadenoma can also mimic mucinous carcinoma. Clinically myxomatous fibroadenoma(M-FA) shows a rapid growth and a relatively larger size. On cytological examination, M-FA can be differentiated from carcinomas based on the absence of marked nuclear atypia and metachromasia in the mucus components, a useful features which is seen on Giemsa staining.3, 14

Mixed tumors (invasive ductal carcinoma with mucinous component) generally yield cellular smears which on cytology show pleomorphism which is marked, necrosis and relatively small amount of background mucin. Features on cytology indicative of a mixed tumor include one or more smears totally without mucin, or scanty amounts of mucin or necrosis. Howevere several studies have reported pure mucinous carcinoma usually show abundant mucin on all smears, no pleomorphism or necrosis.1, 2, 15

It is important to distinguish between pure and mixed IDC with mucinous component as patients with the former type have better prognosis, with a low potential for lymph node and distant metastasis. With the help of FNAC, identification of patients with pure mucinous carcinomas may be possible only in a few cases. Mucin on cytology can be associated with various benign and malignant lesions. The cytology findings of the entire spectrum of mucinous lesions of the breast must kept in mind while dealing with lesions associated with mucin. However the age of presentation, clinical features and radiological findings can help to further categorize the various mucinous lesions.

JB Laforga A case of mucinous spherulosis of the breast diagnosed retrospectively in FNA materialDiagn Cytopathol20063496263010.1002/dc.20536