Background: Diffuse large B-cell lymphoma (DLBCL) is the most common type of primary gastrointestinal lymphomas. It is a clinically heterogenous disease as most patients respond well to therapy, however a significant proportion of these patients become refractory or eventually relapse. Different prognostic factors for response and survival have been described for DLBCL. Immunophenotypic algorithms with small panels of biomarkers have been developed to translate the robust information from molecular studies into a routine clinical.

platform. One of these biomarkers is MUM-1 which is used as a marker for classification of diffuse large B cell lymphoma into ABC type and its expression is associated with poorer overall survival as stated by various studies. We aim to study the expression pattern of MUM-1 IHC in primary gastrointestinal diffuse large B cell lymphomas and its role in prognosis and survival outcome.

Materials and Methods: It was a five-year retrospective study where 40 cases of primary gastrointestinal DLBCL were identified, and MUM-1 IHC was done in 29 cases. Follow up and subsequent survival analysis was done.

Conclusion: Multicentre large studies are warranted to study the role of MUM-1 IHC in prognosis of primary gastrointestinal DLBCL.

GIT lymphomas constitute 10-15% of all Non-Hodgkin lymphoma (NHL) and 30-40% of all extranodal lymphoma. Primary GIT lymphoma which has its origin in GIT mucosa is relatively rare accounting for only 1%-4% of all gastrointestinal malignancies.1 The most common type of GIT lymphoma is diffuse large B-cell lymphoma (DLBCL) followed by MALT lymphoma.1 DLBCL is clinically heterogenous as almost only half patients respond well to therapy and rest succumb to the disease. This variability can be attributed to different gene expression patterns in different stages of B cell differentiation.2, 3

DLBCL can be further divided into germinal centre B-cell (GCB) like and activated B cell (ABC) like based on this gene expression profiling, which was proposed to have prognostic significance by Hans et al. (Figure 2).4

cDNA microarray technique can be used to study different patterns of gene expression, but it is not feasible to perform microarray in routine clinical practice. Thus, more cost effective immunohistochemistry (IHC) can be used to classify DLBCL based on gene and protein expression profiles and this method can be easily performed on paraffin blocks in any pathology laboratory.

MUM-1 is used as a marker for classification of diffuse large B cell lymphoma into ABC type and its expression is associated with poorer overall survival as stated by various studies.4, 5 All these studies have included both nodal and extranodal DLBCL to determine the prognosis of lymphomas expressing MUM-1. In this study, we aim to identify the expression pattern of MUM-1 IHC in primary gastrointestinal diffuse large B cell lymphomas and its role in prognosis and survival outcome. We have excluded cases with nodal lymphomas and secondary gastrointestinal lymphomas in the present study.

This is a five-year study, conducted from January 2009 to December 2013 and was approved by institutional ethical committee. Computerized data base of all the patients were analysed and histopathology slides along with MUM-1 immunohistochemistry (IHC) slides were studied.

A total of 61 cases of primary gastrointestinal lymphoma were identified out of which 40 cases were diagnosed as diffuse large B cell lymphoma (DLBCL). It included both resected surgical and endoscopic biopsy specimens. All the repeat biopsies of a single case were excluded. Tissue sections were routinely processed and stained with haematoxylin and eosin (H&E). MUM-1 IHC (Dako, MUM1p) was done in 29 out of 40 cases of primary gastrointestinal diffuse large B cell lymphoma identified. It was not possible to do MUM-1 IHC in all cases of DLBCL as some blocks were returned to patients for second opinion elsewhere and in some blocks, tissue was depleted. Follow up was done for all cases and SPSS software (Version 20.0) was used for statistical analysis. Survival analysis was carried out by Kaplan Meyer method.

In our study; out of 61 cases of primary gastrointestinal lymphomas, 40 cases were males and 21 were females with a male to female ratio of 1.9:1. Majority of primary GIT lymphomas were seen in elderly with a peak incidence in the 7th decade (median age - 46 years and range of 3-85 years). Diffuse large B cell lymphoma was the most common type of lymphoma accounting for 67.2% of cases (n=41) in all age groups. The highest incidence was seen in 7th decade of life but it was also seen in children less than 10 years of age although it was quiet infrequent in younger age group. Most cases of DLBCL were located in stomach (n=19, 46.3%) followed by colon (n=8, 19.5%). 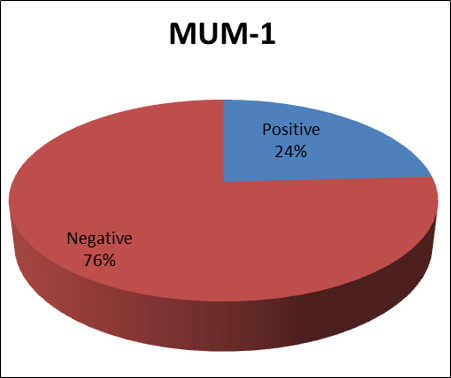 Expression of MUM-1 marker in different series of cases 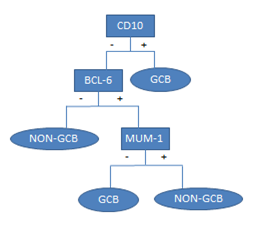 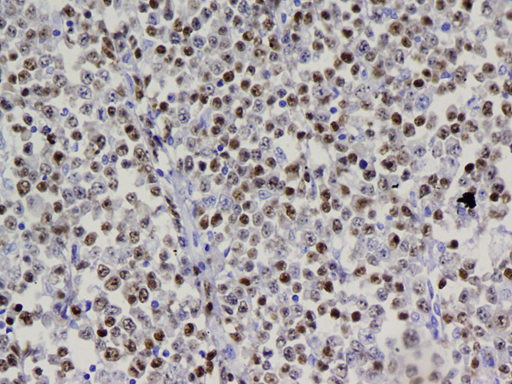 MUM-1 is a myeloma-associated oncogene transcriptionally activated as a result of t(6;14)(p25,q32) and by virtue of its juxtaposition to the immunoglobulin heavy chain gene (IgH) locus.5 It is a lymphocyte specific member of interferon regulatory factor family of transcription factors (so also called as IRF4). MUM-1 expression represent the final step of intra-GC B cell differentiation and subsequent maturation to plasma cells.10 Thus MUM-1 is used as a marker for classification of diffuse large B cell lymphoma into ABC (Activated B cell) type. MUM-1 can be looked upon as a marker for identification of transition from BCl 6 positivity to CD138 positivity. It is also thought to be involved in activation of T cells, lineage commitment of lymphocytes and Fas-dependent apoptosis.6 MUM 1 expression has been reported in 50%- 77% of DLBCLs. 4 Apart from DLBCL, MUM1 expression can be seen in Reed Sternberg cells of classical Hodgkin lymphoma, B cell chronic lymphocytic leukemia/small cell lymphocytic lymphoma and some cases of follicular lymphoma.10 With 3 marker model (CD10, BCl6 and MUM-1), DLBCL can be classified into germinal centre type and activated B cell type which has prognostic implications (Figure 2).4, 6 It denotes association with lymphoma genesis and tumour progression and hence expression of MUM-1 is associated with poorer overall survival.4, 5 However various other studies have failed to show any significant difference in overall survival between MUM-1 positive and MUM-1 negative cases.7

MUM-1 alone when used as a prognostic marker had shown variable results in various studies (Table 2). In our study MUM-1 was done in 29 out of 40 (72.5%) cases of DLBCL and it was positive in only 7 cases (24%) and negative in 22 cases (76%). This was much less than that documented by Bodoor et al,8 Hans et al,4 Chang et al,5 and Colomo et al.7 The possible explanation can be due to small sample size in our study and all cases were extranodal lymphomas while these studies took into consideration nodal lymphomas. Berglund et al 6 showed MUM-1 expression in only 32% of cases and their study group comprised of 64% cases of extranodal lymphomas. Exact role of MUM-1 expression in extranodal lymphomas is yet to be determined.

The diagnosis, staging and management of DLBCL has greatly improved in the last two decades because of better insight into its aetiology and molecular aspect as well as the knowledge about its critical signalling pathways. We attempted to study the outcome of the primary gastrointestinal DLBCL based on MUM-1 expression and found it to be associated with poor prognosis and shorter survival. But our study was not statistically significant. This retrospective study has some limitations, most importantly, the small sample size and loss to follow up of the study cases. Further prospective multicentre or large-scale studies are warranted to better understand the immunophenotypic and molecular features of DLBCL in extranodal lymphomas and especially primary gastrointestinal lymphomas where treatment strategies and prognosis is distinct from nodal lymphomas.